France doesn’t have what you might call a biscuit or cookie culture, somewhat surprising given that biscuit is French for twice cooked. But, as you can see from its supermaket shelves, brands from other countries tend to dominate. Aside from the many artisanal and regional biscuits – see Part II), there is one famous French industrial manufacturer, LU (Lefèvre-Utile) from Nantes whose history demonstrates the rise (and fall) of biscuits in France.

How it all began….

The history of the LU Biscuit Company starts with the arrival of Jean-Romain Lefèvre, a pâtissier from Varennes-en-Argonne, in Nantes in 1846. Jean-Romain was hired to work in a patisserie on Rue Boileau. In 1850, he married Pauline-Isabelle Utile, and the couple decided to buy the patisserie to turn it into a “Manufacturer of Reims biscuits and bonbons.” To begin with, the business remained modest and biscuits were sold directly from the oven on a table in the patisserie’s courtyard.

Success came very quickly, and the couple opened a second store in 1854, under the business name Lefèvre-Utile. Following this, Jean-Romain received the gold medal at the Nantes Industrial Exhibition in 1822 in recognition of the quality of his wares. But health problems struck the following year, leaving the company in the hands of his wife and youngest son, Louis Lefèvre-Utile.

By the end of 19th century, the biscuits were sold in bulk. Louis opted for more modern packaging, in decorated tin boxes which served as an affirmation of quality. Lefèvre-Utile’s advertising was entirely founded on the quality of their products. This was backed up by the company winning competitions and being selected for awards. Proud of this recognition, Louis Lefèvre-Utile had them included on the packaging, developing the advertising to catch the consumer’s eye. 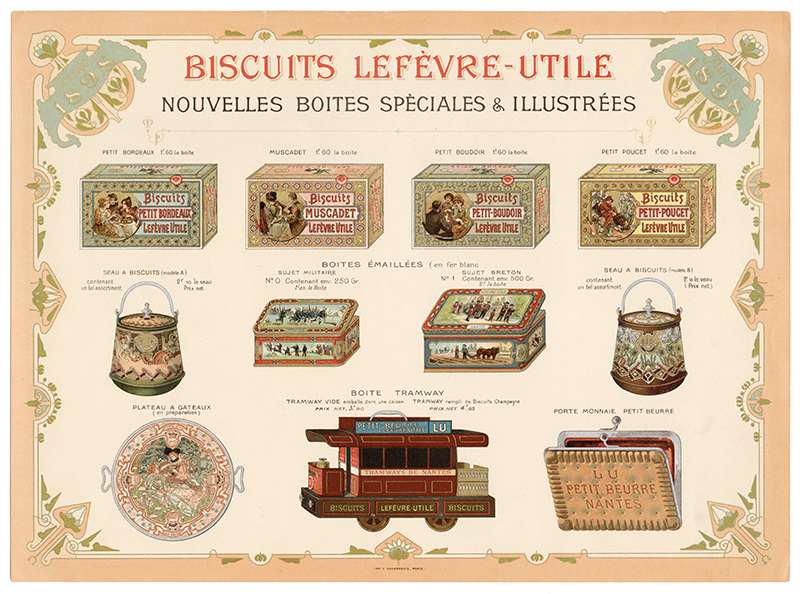 The brand identity had already been established in the 1860s by Jean-Romain Lefèvre and Pauline-Isabelle Utile, who chose Pheme, the Ancient Greek personification of fame, to assert the quality of their products and a triumphant spirit. By the end of 19th century, the packaging had become the main means of advertisement. Louis inherited an organisation with 17 employees. Patisserie products were prized by the bourgeoisie, and, to meet ever-increasing demand, in 1881, Louis bought a former spinning factory on the Ile de la Madeleine, near the station. Imitating the English model that dominated the market, he modernised production tools by introducing mechanical manufacturing methods to the industry and acquired a brand-new English device, a steam engine. The factory regularly expanded to the point that it became a veritable city district. 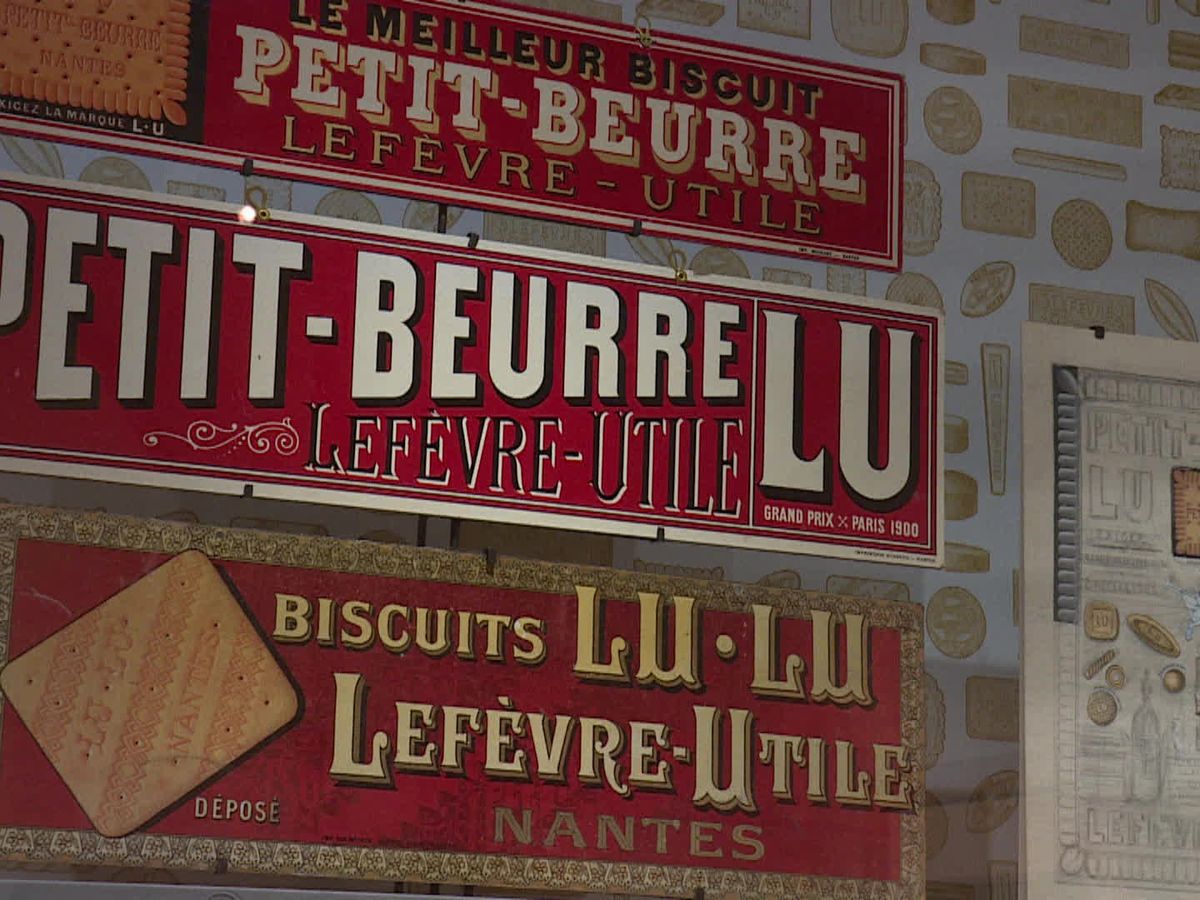 In 1886, Louis Lefèvre-Utile perfected the recipe and design of what would become his greatest success: the Petit Beurre biscuit. He documented the definitive design of the molds for the “Petit-Beurre LU Nantes,” but didn’t register the shape and brand with the commercial court until 1888. Thanks to its relatively modest price, this biscuit had wide appeal. 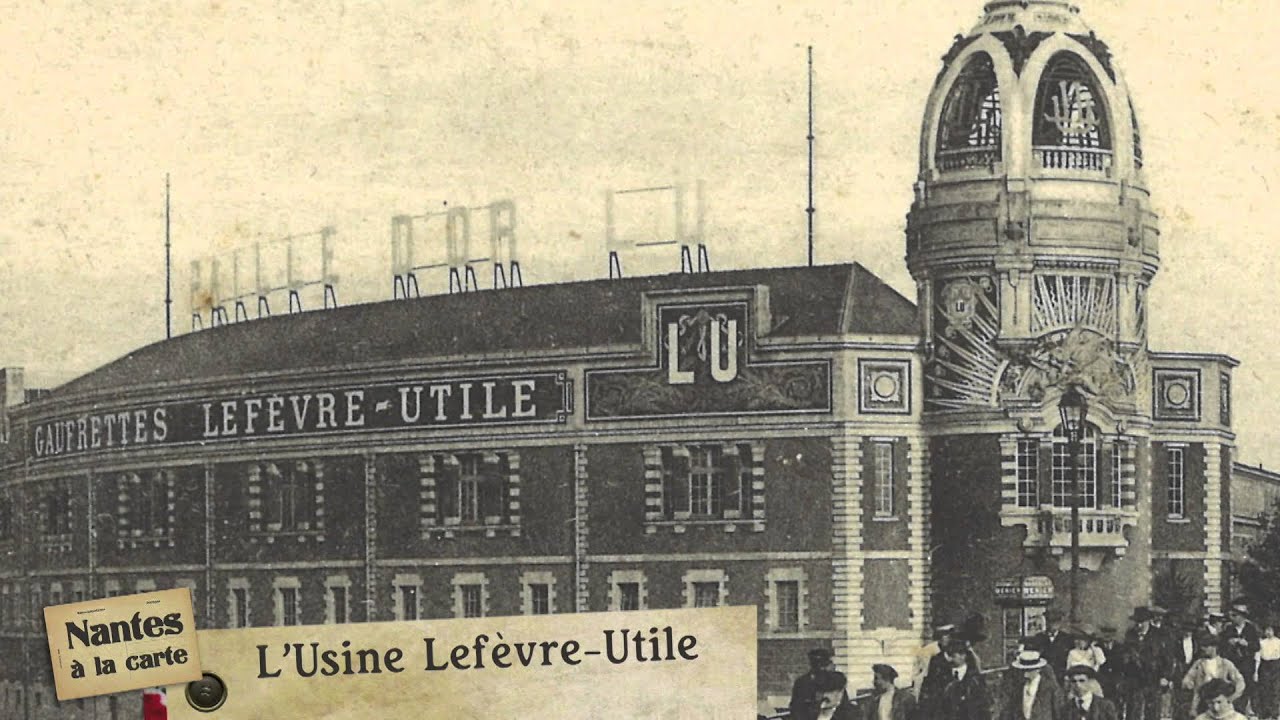 The following year, Louis Lefèvre-Utile joined forces with his brother-in-law Ernest Lefièvre and together, they officially founded the Lefèvre-Utile corporation. Ernest handled the management of the company and Louis devoted himself to production. The following year, a fire gutted the factory and Louis seized the opportunity to expand it, building workshops, offices, laboratories, ironworks, shops, storage spaces, stables and a power station. At the beginning of the 20th century, LU had a range of around 200 different biscuits sold in France, and exported.

Louis Lefèvre-Utile paid particular attention to the aesthetic of the packaging. He thought that catching the client’s eye was the first part of enjoying the biscuits and thus involved several artists in designing the brand’s advertising. Many famous artists would go on to collaborate with manufacturers, but Louis Lefèvre-Utile was one of the forerunners. By collaborating with famous artists, he gave the company a modern and definitively innovative edge.

In 1897, he sent his son’s sketches to Firmin Bouisset, who turned them into the Petit Écolier (Little Schoolboy), whose image is still found on the biscuits of the same name. And in 1905, in the golden age of industry, Lefèvre-Utile brought out the Paille d’Or. 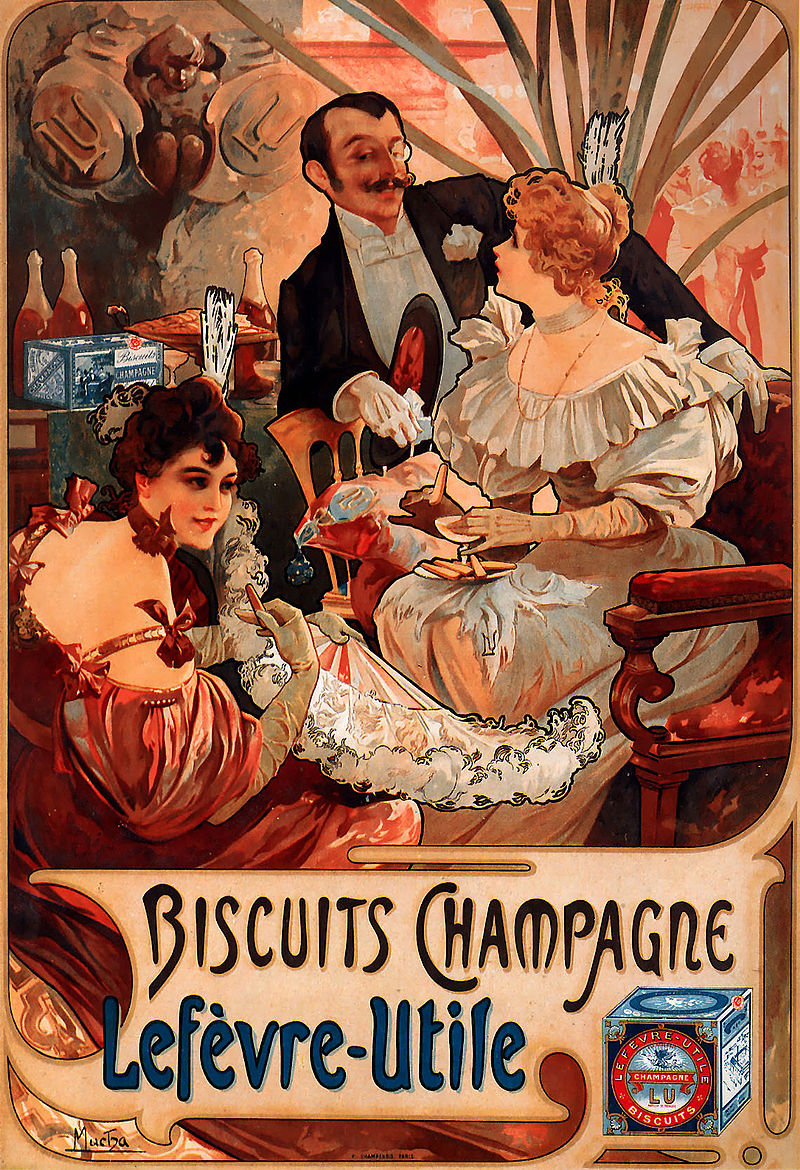 Louis called first on local artists, then on artists in Paris and abroad. For example, he collaborated with Alphonse Mucha between 1896 and 1903. In 1903, Mucha created a portrait of Sarah Bernhardt for a LU advertisement. The company’s advertisement paintings were true works of art. Inspired by Art Deco, they took the form of posters, mural advertisements painted on building gables, and billboards attached to streetcars or displayed at big events such as world fairs.

As for the biscuits, production focused on an elite brand image, largely intended for a bourgeois clientele. Quality remained the company’s guiding principle. The ingredients were meticulously selected by Louis himself: butter, milk and honey from Brittany, eggs from the Vendée, flour from the mills of Nantes, and exotic products such as sugar and vanilla from the colonies and brought directly from the port of Nantes to the factory. 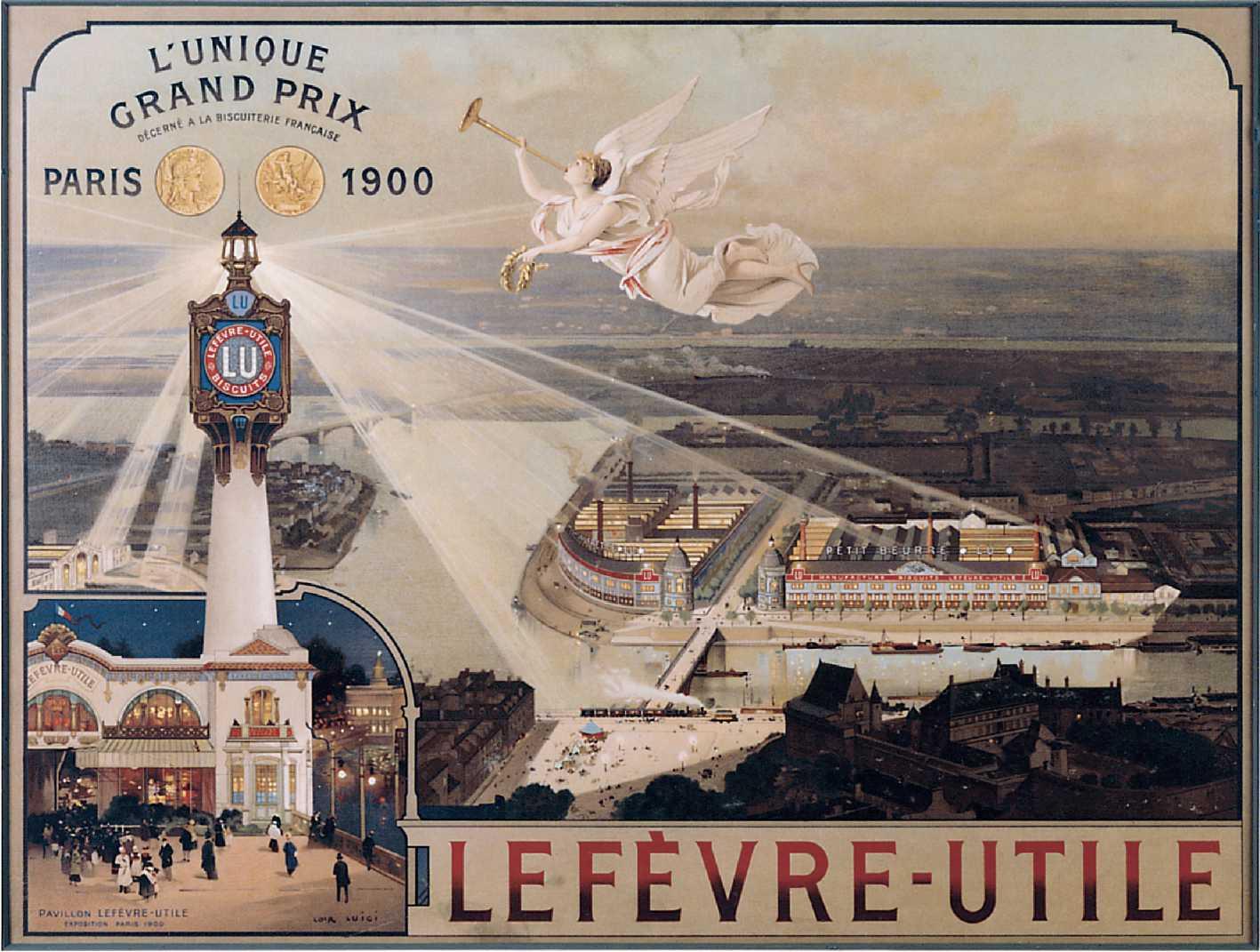 With an eye towards the company’s further development, Louis Lefèvre-Utile took it to the 1900 Exposition Universelle in Paris, for which he commissioned Auguste Bluysen to build a 36 metre (118 ft) tower. Drawing inspiration from lighthouses, this tower became emblematic of the brand, as soon afterward, two towers would be built in Nantes. The idea behind these projects was to show that the company was a lighthouse for the city.

Before World War I, some 500 men and nearly as many women worked at the factory. The men performed the more physically demanding tasks such as kneading, rolling and cutting the dough, and the baking, while the women took care of breaking eggs and packaging the biscuits. Working conditions in the factory were terrible. Day and night, teams worked in shifts to ensure continuous production. The heat and noise made the work arduous, but not as difficult as that in the nearby canning factories or refineries. And while the pay was modest, the company offered social benefits, such as a profit-sharing scheme, free medical care, an emergency fund in case of illness and a retirement bonus. On the other hand, unions were banned.

At the outbreak of the World War I, the three main manufacturers in Nantes – LU, Biscuiterie Nantaise (BN), and Biscuiterie de l’Union – were requisitioned to produce military rations. In the interwar period, the consumption of biscuits spread to all levels of society. But LU was in a poor position due to their aging machines, domestic competition, and a long and chaotic handover between Louis Lefèvre-Utile and his son Michel. Furthermore, the 1929 crisis meant the decline of many companies, including LU. The company temporarily shut its doors in 1936, firing 750 employees.

World War II meant a return to the production of  military rations. Louis Lefèvre-Utile died in 1940 and his son Michel took over at the head of the factory in partnership with the other biscuit families. Michel improved the distribution network and introduced new packaging but the lack of raw materials meant halting production of Petit-Beurre cookies first in April 1942, and then for a second time in June 1944.

LU persisted in manufacturing products despite everything and in 1947 the company received state assistance to modernise. By 1951, the Petit-Beurre production line was completely automated, the distribution network was improved, and new packaging came into circulation for export. Biscuits were no longer a luxury item and LU produced them en masse.

In turn, Michel brought his son, Patrick Lefèvre-Utile, into the company. Patrick followed his grandfather’s innovative tradition in the field of advertising and in 1950, introduced colour photographs of the product on the packaging. Then, in 1957, he asked Raymond Loewy, creator of the Coca-Cola bottle, to redesign the packaging of the LU Petit-Beurre. The result was a complete change in material, design, and colour.

In the early 1960s, in the face of the American products flooding onto the market, Michel Lefèvre-Utile suggested to his friend and counterpart Georges Cossé, head of BN, that they coordinate their industrial and commercial policies. At the end of the sixties, Patrick Lefèvre-Utile became head of the company, replacing his father, Michel. The financial situation at the factory was grim, and it became imperative that he create alliances with other French companies so in 1969 LU merged with Brun to become LU-Brun. 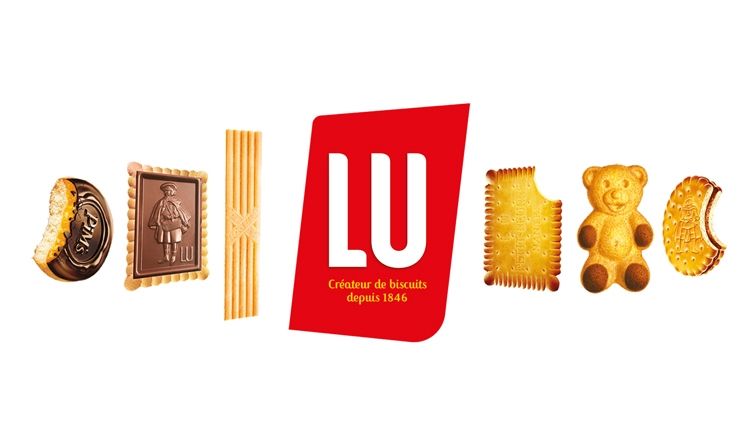 This restructuring meant the end of the family business. A few years later, in 1975, LU-Brun was bought to form the Céraliment LU-Brun group. The name changed again in 1978 to Générale Biscuit and in 1987, a new factory was built in La Haye-Fouassière, near Nantes. The company continued to innovate in the field of advertising, with new iconography recalling the brand’s beginnings at the end of the 19th century.

The brand is now part of US confectionery giant Mondelēz International, after splitting from its previous owner Kraft Foods, in 2012 which acquired the biscuit company from Groupe Danone in 2007. The Petit-Beurre biscuit remains the flagship product alongside the Boudoir, Champagne, Petit four, Prince, Pim’s, Paille d’Or, etc.

The former factory which was left abandoned until the 1990s has slowly been restored and converted into a live entertainment venue, is known as the Lieu Unique.

17 Comments on “French biscuits: Part I”