While France may be best known for its exquisite pâtisserie creations and extravagant gâteaux, the not-so-humble biscuit deserves some recognition too. There are some delicious French biscuits and while they aren’t as revered as foods like cheese and baguette, they do have a role, largely as after-school snacks. Yesterday I wrote about a well-known and well-loved brand which originated in Nantes, today we’re going to look at a few more traditional French biscuits. If I’ve missed any of your favourites, please let me know.

France ranks about in the middle of biscuit-consuming European countries (at the top of the list is another Francophone country (well, half-Francophone): Belgium). Still, most French adults don’t regularly indulge in biscuits, and don’t consider them their favourite sweet treat by a long shot, though they’re popular with children.

Go to any French supermarket and you’ll see a pretty impressive variety of biscuits the origins of which are in more biscuit/cookie-friendly countries like Belgium, USA or UK. Still, they’ve been adopted firmly into French life to a certain extent, from longtime favourites like spéculoos and Prince sandwich cookies from Belgium, to Oreos from America.

One French biscuit brand you will see is the long-standing Lefèvre-Utile (LU), particularly its Petit-Beurre biscuit, first created in 1886 by Louis Lefèvre-Utile.  I wrote about the company and its development yesterday. My two sisters – both tea drinkers – say these are the best biscuits for dunking in their tea. I haven’t had the heart to tell them that in France to tremper son biscuit (to dunk one’s biscuit) means “to have sex”.

LU brand biscuits such as the Petit-Beurre and Petit Écolier have become a household institution in France since their creation all those years ago, but they draw on a well-established tradition of biscuit bakery from across the whole Hexagone. Almost every region has at least one hallmark sweet biscuit, perhaps more homely in form than the artful creations crowding the windows of town centre pâtisseries but just as delicious. Let’s take a quick tour.

Biscuits in Brittany and Normandy

Those previously mentioned LU biscuits owe their origins to the salt-marshes of the Atlantic coast. Salted butter (and more latterly the now-ubiquitous salted caramel) has long been employed as an ingredient in shortcake-style biscuits. Brittany’s famous Palets Bretons – reputedly invented in 1920 at the Biscuiterie de Pont-Aven by local baker Alexis le Villain, and named Traou Mad (good things) – are a chunkier, airier version of the local thin and crispy butter shortbread Sablés Bretons. Both biscuits owe their teatime allure to their high content of local salted butter – around 20%!

Normandy also has a similar biscuit, again making the most of all the fresh creamy butter available to bakers in the area. One of the longest queues on the Mont Saint-Michel is always that at the La Mère Poulard biscuit bakery which has remained unchanged since 1888.

Away from the obvious dairy areas, and sometimes within them too, flavourings for biscuits take many forms. With the Galette Charentaise, Saintonge in Charente takes the basic buttery shortbread recipe and gives it a slightly softer texture, flavoured with locally grown angelica, while Villebois-Lavalette even celebrates its triangular aniseed-scented Cornuelle every Palm Sunday with an annual Fête de Cornuelle.

Heading south, into Drôme, the curious Suisse de Valance – a shortbread flavoured with small pieces of candied orange peel and orange blossom – rubs pastry shoulders with the Lunettes de Romans, in Romans-sur-Isère, which resemble Jammie Dodgers with two ‘lunettes’ but whose origins date back to the Middle Ages. 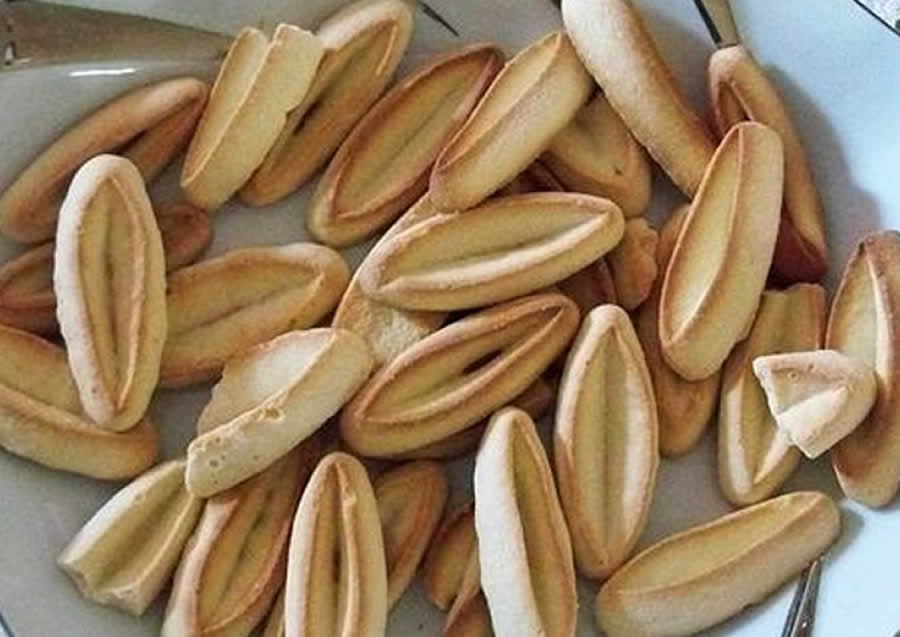 Down my way near the Mediterranean, the orange-blossom flavoured Navettes de Marseille are baked from unyeasted dough, giving them a much longer shelf-life than their buttery northern counterparts. The oldest Navettes bakery in Marseille is the Four des Navettes which sits close to the Abbaye Saint-Victor and has been baking the boat-shaped biscuits continuously since 1781. While enjoyed year-round (often warmed gently to soften them a little) Navettes are particularly associated with the February Fête de la Chandeleur.

Eastern France has its fair share of biscuits too. Reims in the Marne département, the heartland of champagne production, has the delicate biscuit rose de Reims. Crispy but spongy at the same time, it was created in the 1690s by Maison Fossier. Flavoured with vanilla, it owes its characteristic pink colour to the addition of carmine, intended to hide the dark particles of vanilla within the sponge.

Christmas just would not be Christmas without the traditional biscuits of Grand Est. Baked with a huge variety of different flavourings, so much so that it’s common to be offered an assortment in a baker’s, the bredele is a biscuit historically associated with Alsace. Popular traditional flavours include aniseed, orange and cinnamon, nuts and pain d’épices, but modern tastes are catered for too, with peanut butter and maple syrup among more avant-garde flavour options.

In addition to the local speciality biscuits that grace the tables of towns and villages of France, there are also teatime treats that can be seen throughout the country. The less-than-charmingly-named but delicious Langues de Chat (cat’s tongues) is a crisp stalwart of the kitchen cupboard, while Palmiers sit more on the pastry side than biscuit, but are found in bakeries and supermarkets everywhere, such is their popularity. La crêpe dentelle is a crisp flaky biscuit oft served with ice cream and not dissimilar to la cigarette russe. I could go on and on, but I won’t…..

For the avoidance of doubt, despite what you might read elsewhere, madelaines, financiers and macarons are not biscuits.

All images courtesy of Wikipedia