The Italians have been doing it since April, the Greeks started on Monday – and France is shortly set to follow suit, allowing the country’s café, bar and restaurant terraces to reopen for the first time since autumn.The French government has confirmed that the reopening of bar, café and restaurant terraces will go ahead as planned from 19th May – whopee! 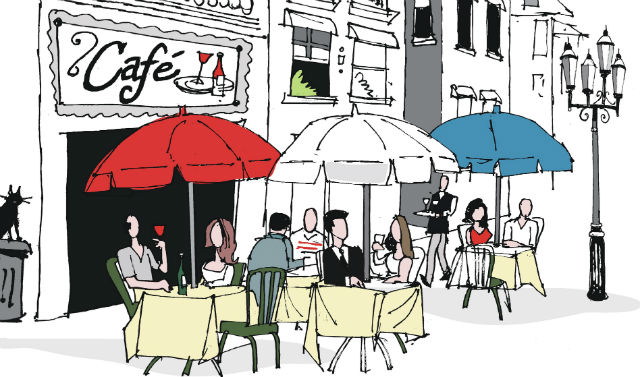 The signs are promising, but that certainly doesn’t mean that we can stop taking precautions. Let’s continue to wear masks, maintain correct distances. But we can start moving back towards something like normality.

A Harris Interactive study for Coca-Cola European Partners published last week, revealed that 68% of those in France (me included) are already looking forward to that first drink with friends en terrasse.

So, how will it work?

Strict conditions will remain in place. Only outdoor terraces will be open; there will be a limit of six people to a table; and the curfew remains in place, though it is to be shifted from 7pm to 9pm.

But Covid-19 is still heavily affecting France and although the numbers are falling, how safe is it to return to socialising outdoors?

The main message is still that (outdoor terraces) are far less risky than poorly ventilated interior spaces. A leading epidemiologist estimated the risk of infection at 18 to 20 times lower outdoors than inside.

Nearly 18 months after the start of the pandemic, experts agree that Covid-19 is largely transmitted through aerosols – tiny droplets of breath and saliva that hang in the air produced through infected people breathing, speaking, shouting or singing. In a poorly ventilated space, an aerosol cloud can hang for several minutes or even hours before dissipating. But outside on a terrace, it dissipates rapidly into the atmosphere, like cigarette smoke.

But outdoor terraces are still potentially problematic because those environments are associated with loud speech, people being close to each other, and, consequently, not wearing masks. Having said that, being outdoors will substantially reduce risks of transmission compared with indoors.

Indoors, aerosols remain dangerous for those in close quarters with an infected person, as germs can be inhaled before they have chance to dissipate.This is why distance between people is the most important factor, even outside, especially when you are eating and drinking and therefore cannot wear a mask.

I’m getting a sense that I may only want to initially socialise with those who’ve been vaccinated since vaccines offer the best long-term protection and the best way to reduce infections.

In a recent study French researchers also noted a “short-range aerosol risk” and suggested the use of large fans which induce turbulent fluctuations, rather than an average flow though the risk varies with the direction of the wind and declines with distance from an infected person. The authors of the French study said that besides giant fans, devices could be placed on tables to filter ambient air.

So, to sum up, I’ll only be drinking/eating on terraces with my beloved where there’s more than adequate social distancing. But first up we’ll be enjoying a picnic this weekend somewhere more than 10km from home.