Its a well-known fact that a woman can never have too many pairs of shoes! This isn’t the first time I have featured lust-worthy shoes on my blog and it won’t be the last.

The man who re-imagined heels
Roger Vivier was born in Paris at the turn of 20th century and in 1925 he enrolled in the Ecole des Beaux-Arts, hoping to become a sculptor. However, a family friend gave him a job at a shoe factory outside of Paris, where he learnt the ins and outs of shoe design. He quickly realised he could make sculptures to be worn. He continued his studies working in several other factories while completing his art school degree.

In 1936 he accepted a job offer from Laboremus, the French subsidiary of a large German tannery, where he was responsable for predicting trends and advising on which colour skins would sell best. At night he sketched the shoes he could make with these colourful skins.

A year later he opened his first workshop in rue Royale, one of the most prestigious addresses in Paris, carrying exclusive models for a private clientele, including Josephine Baker and Mistinguett. whom he’d met while designing theatre sets. As he became better known within the profession, Vivier began to collaborate with world’s largest shoe manufactures. His revolutionary cork-platform design was rejected by Delman, but designer Elsa Schiaparelli picked it up and included it in her 1938 couture collection.

Just before WWII, Vivier ended up working in the US but the post-war economic recession restricted shoe production forced Vivier to switch professions and he became a milliner, opening a shop in 1942 called Suzanne and Roger on Madison Avenue. It became the Parisian meeting place in New York. 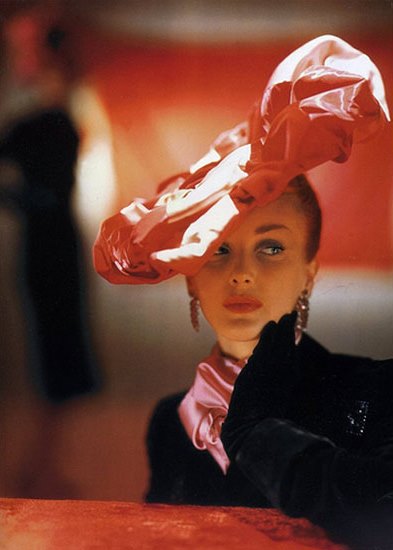 When the war ended, Vivier returned to designing shoes for Delman. More importantly, in June 1953 he designed the garnet-studded, gold kidskin pumps worn by Queen Elizabeth II at her coronation. 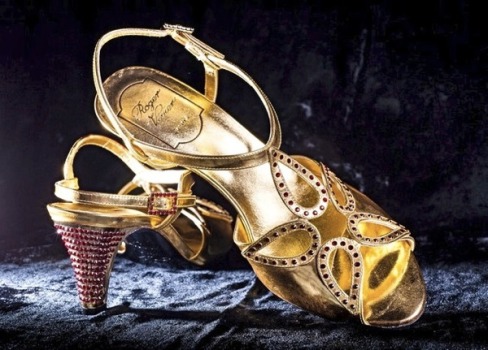 On his return to Paris, Vivier met Christian Dior and when Dior established a custom-made shoe line with Delman in 1953, Vivier was the named designer. Two successful years later, the duo created a ready-to-wear division. It was the first time a Parisian couturier had associated himself with a shoemaker for mass-market distribution. 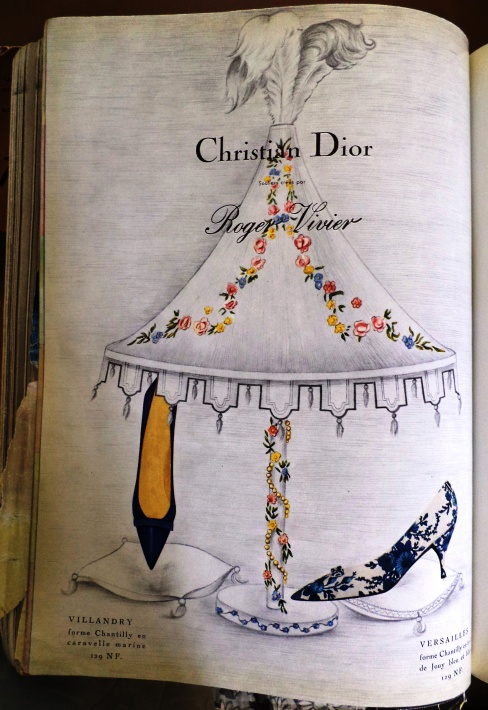 The stiletto is refined
In 1954 Vivier introduced the eight centimetres (approx. three inches) high stiletto. Though he’s often credited with inventing it, he merely refined it. The stiletto heel was invented after WW II. Prior to the war, no designer ever attempted to create one because wood alone couldn’t support the weight of a woman. It would have been the equivalent of walking on chopsticks. After WW II the extrusion of steel allowed designers to make steel rods that could support a woman’s weight.

When Christian Dior died in 1957, Vivier began collaborating with Dior’s successor, the young Yves Saint Laurent. A year later Vogue hailed Vivier’s new elongated, square-point toed pilgrim shoe. In 1959 he introduced the inward-curving choc heel. A year later, a re-imagination of 19th century d’Orsay pump earned him the Neiman-Marcus Fashion Award. In 1962 his collaboration with the House of Dior came to an end. 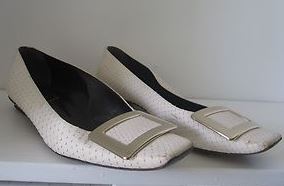 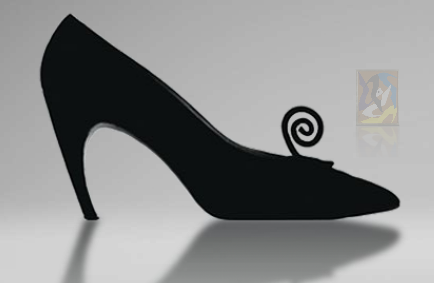 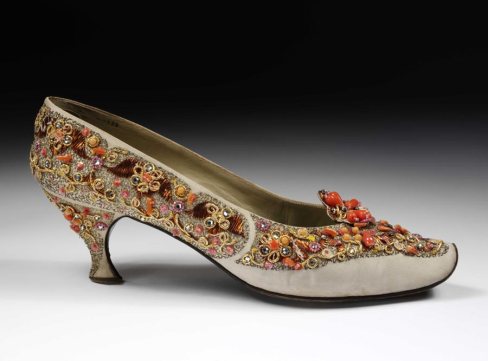 Thereafter,  Vivier designed shoes for his shop in Paris while American versions his style were manufactured and sold by Saks Fifth Avenue. He also created shoes for top designers such as Emanuel Ungaro, André Courreges, Cristobal Balenciaga and Yves Saint Laurent, now designing under his own name.

Vivier continued to innovate , for example he consulted with aeronautical engineers on the design of his swooping comma heel, that became another of the most copied styles in footwear history. 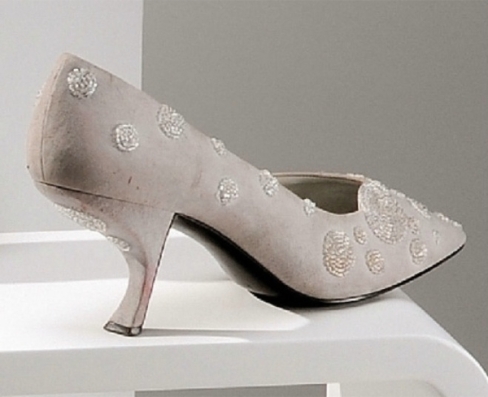 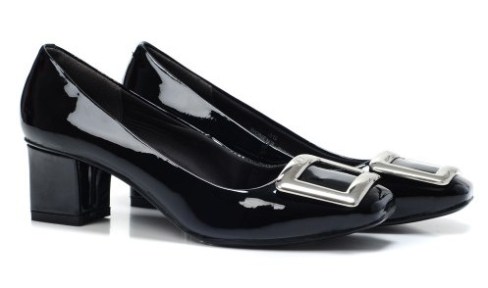 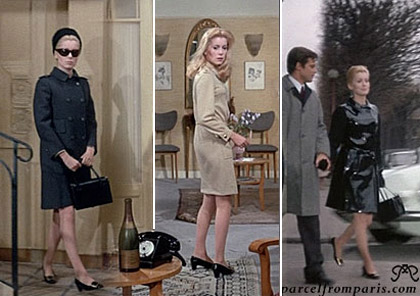 In 1968 Roger added scarves  – another of my weaknesses! – and gloves to his collection and a year later a men’s department offering made-to-measure shoes.

Among Vivier’s biggest fans were Wallis Simpson, the Duchess of Windsor (her shoe closet is picture below) and Vogue’s editor, Diana Vreeland, both of whom had extensive collections. Indeed Vreeland was among the many who regarded Vivier’s work as true art. In her 1977 Metropolitan Museum of Art Costume Institute exhibit, “Vanity Fair,” she contrasted examples of his craftsmanship with that of 18th century artisans. 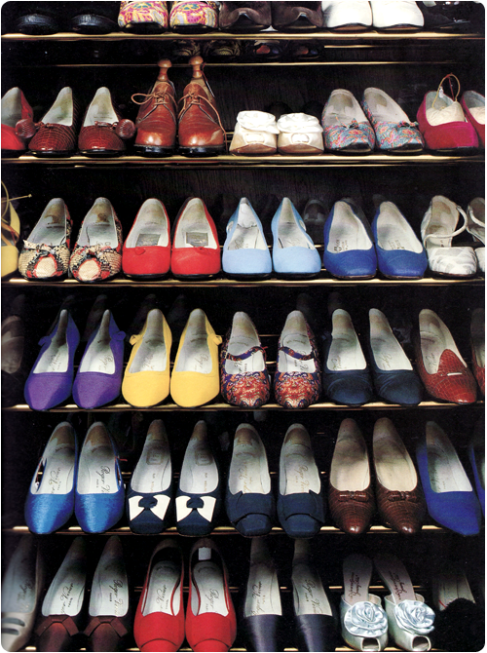 In 1994 the 86 year old Roger Vivier signed a new licensing agreement which gave him the backing to continue doing what he loved most – designing shoes. Four years later, in October 1998, Vivier died in Toulouse, France. He is remembered by many, including fellow shoe designers. He’s since been immortalised in print and with various retrospectives. 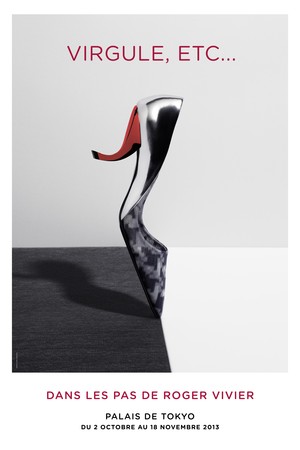 Vivier’s Legacy is in good hands
The Roger Vivier brand was revived in 2000 by Diego Della Valle, chairman of Tod’s SpA who installed Bruno Frisoni as the house’s creative director. The latter refreshed the statement hardware, the buckle, in many different ways, including a rounded version. In his last collection for the brand in Autumn/Winter 2018, he mounted a sumptuous crystal rendition of the Roger Vivier buckle on combat boots. 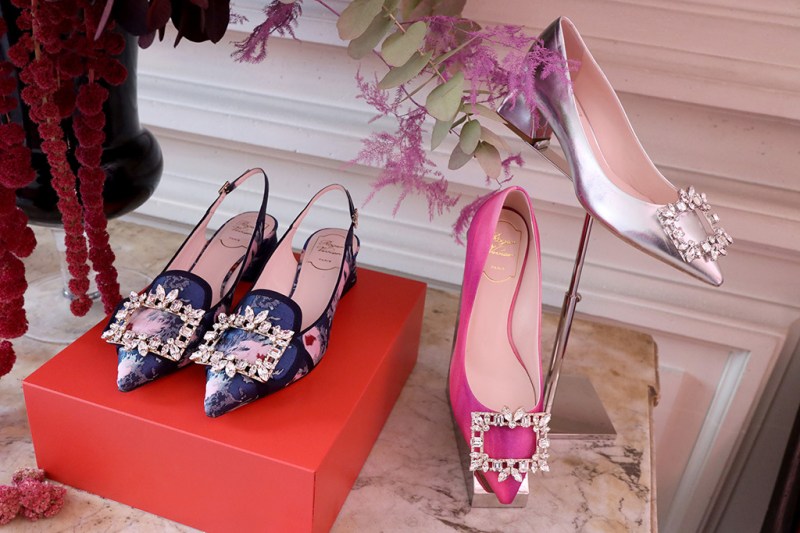 This connection to the past is an affirmation that the allure of the Roger Vivier buckle has not faded with time, maintaining the brand’s relevance. Even in casual reincarnations such as rubber, it is no less luxurious.

All images courtesy of Roger Vivier