Today I’m looking at a local company founded in 1980 in Carros. Arkopharma is a pharmaceutical laboratory specialising in the field of phytotherapyphy, natural medication and dietary supplements. It’s the French and European leader in natural plant-based medications and dietary supplements. Note, Phytotherapy is commonly defined as the study of the use of extracts of natural origin as medicines or health-promoting agents. 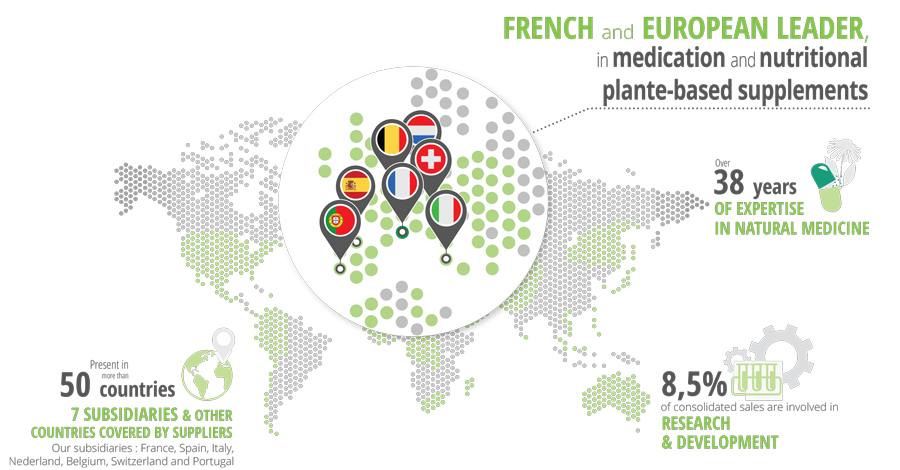 Doctor Max Rombi, a passionate believer in phytotherapy and co-founder of the Virbac veterinary laboratory, decided to devote himself entirely to his passion for herbal medicine and share the benefits of these natural remedies with the general public, by marketing a range of plant-based products. Rombi was convinced that most health problems are caused by a poor diet and that plants and natural substances can prevent and relieve most of our everyday health complaints.

Remember that in the early 1980s, phytotherapy was considered quite old-fashioned, and tended to be synonymous with formulations such as herbal teas and concoctions that were not easy to ingest.

In 1982 Dr. Rombi was the first to introduce plant-based supplements onto the market in capsule form, by replacing loose herbs with pre-dosed forms that are much easier to use.

Several years later, in 1985, he was also the first to adapt the cryogenic grinding process to phytotherapy, making it possible to offer plants in powder form, which enhances their efficacy and the bioavailability of their active ingredients. During the cryogenic grinding process, plants are crushed using liquid nitrogen at very low temperatures, which preserves all of their active ingredients and results in a very fine powder that is easy to assimilate.

The French Ministry of Health officially recognised phytotherapy as an independent branch of medicine in 1986, by classifying certain plants as medicines. This decision was based not only on their traditional usages, but also on numerous scientific studies. Arkopharma developed its first authorised plant-based medications, Arkogélules.

Thereafter, Arkopharma created four subsidiaries abroad: Spain, Italy, USA, UK and in 1996 was listed on the AIM-equivalent market in Paris.

In 1997, Arkopharma also made a name for itself by offering the first 100% plant-based product range, thereby cementing its status as leader in the field of phytotherapy. That year, in the midst of the “mad cow” health scare, the gelatin traditionally used for the outer envelope of capsules was replaced with a plant-based natural substitute: a derivative of cellulose (cellulose surrounds and protects all plant cells). For the first time, consumers had access to capsules that were truly 100% plant-based.

In the early 2000s, the company followed  a trail of acquisitions of like-minded companies and successfully expanded its range of dietary products. This expansion came at a price and in 2007 Arkopharma de-listed and set out an action plan to improve the Group’s operating margins, by reducing its product portfolio and launching an ambitious advertising campaign to boost the Group’s flagship products.

The action plan succeeded, the Arkopharma Group returned to profitability and was acquired in July 2014 by Montagu Private Equity.

Remaining Close to its Roots

Of the 4,900 flowering plant speciesnative to France (in other words, which have not been introduced or adapted), this département alone contains over 3,000 of those species (that’s over 60% of this incredible diversity). By comparison, the average French département is home to between 1,000 and 1,300 such species.

Thanks to its prized location at the crossroads between the Alps and the Mediterranean, this region benefits from a mixture of alpine, Provençal, Mediterranean and Ligurian influences, between sea level and the Cime du Gélas (3143 m), and constitutes the only place in Europe in which all these levels of vegetation can be found together.

The array of medicinal Arctic-alpine and subalpine species, such as rhodiola, bearberry, yellow gentian and arnica, together with others of Mediterranean origin, including thyme, lavender and olive trees, bear witness to this unique biodiversity.

This vast botanical wealth is accompanied by 200 rare species, including Ligurian gentian, Potentilla Valderia and Nigritella rose. And on top of all that, the region boasts around 40 specific species classified as endemic (species that are only found in this part of the world). For example, the “multi-flowering” saxifrage (Saxifraga florulenta) is unique in that it flowers only once at the end of its long life of between 40 and 70 years. It can be found at the heart of the Mercantour National Park.

Many medicinal plants found in the wild or grown for consumption are incorporated into the product ranges offered by Arkopharma.

This rich natural heritage is offset by the treasure trove of ornamental and museum gardens that adorn the coast between the towns of Menton and Antibes. Four botanical gardens are particularly worthy of mention: Val Rahmeh in Menton (belonging to the Paris Natural History Museum), the gardens of the Carnolès Palace in Menton (housing Europe’s largest collection of citrus trees), Villa Les Cèdres in Saint Jean Cap Ferrat (a private garden spanning 14 hectares, boasting more than 14,000 mostly tropical plant species) and Villa Thuret in Antibes (a garden now run by the INRA research institute). The region’s vast array of ornamental gardens includes, to name just a few, Serre de la Madone garden in Menton, the gardens surrounding the Villa Ephrussi de Rothschild in Saint Jean Cap Ferrat and Parc Phœnix in Nice.

In this rich environment combining nature and man-made beauty, vegetation is omnipresent in all its splendid diversity: It was therefore entirely natural that the Arkopharma Group should set up home here, and continue developing and producing its plant-based healthcare remedies in this region of outstanding beauty.

The Arkopharma Group has a comprehensive approach to corporate social responsibility which unites all its employees, suppliers and shareholders around the consideration of social, corporate, environmental and economic issues.

There is little doubt that the concept has gone from strength to strength since then, and the healing power of phytotherapy has been backed up by numerous scientific studies around the world. Thanks to its health benefits and its natural dimension, phytotherapy has become part of our daily life.

All images courtesy of Arkopharma