The Delta variant is the main form of Covid-19 circulating in France, and is responsible for the huge spike in cases recorded over the past few days. Prime Minister Jean Castex has admitted:

Last week, Health Minister Olivier Véran had told MPs that total cases had increased 150% in a week because of the fast-spreading variant. The rise, he said, was ‘unprecedented’.

The French government has rolled out the health passport to venues including cinemas, tourist sites, cafés, bars, shopping centres and long-distance travel, as well as making vaccines compulsory for health workers.

Meanwhile on a local level, many authorities, including those in the Alpes-Maritimes where I live, are reinstating compulsory face masks in the street and in some areas bars and restaurants are closing early.

If the 18,000 new cases number mentioned in Parliament last Tuesday sound bad, the figures are continuing to rise.

France recorded 21,539 new Covid-19 cases last Wednesday – a figure Health Minister Olivier Véran said showed the “gravity” of the health crisis. He warned that models showed infection numbers would peak at the end of the summer, at levels that could overload hospitals. A further 21,909 cases were reported the following day.

This graph below, from le Parisien journalist Nicolas Berrod, shows the steep rise of recent days.

The current national positivity rate, according to the Covidtracker website run by French data scientist Guillaume Rozier, is over 3%  and the R-rate is at 2.12, meaning that the virus is spreading again, rather than being in retreat as it was when that figure was below 1.

The national number of cases per 100,000 people currently stands at 179 – but there are massive local differences, as this map shows.

But with almost half the French population now fully vaccinated, how do increasing case numbers affect hospitals?

The number of people hospitalised and in intensive care has been falling for several weeks at the national level. But the sudden and significant rise in infections has health professionals fearing the worst.

There is usually a time lag of two to three weeks between a rise in cases and a rise in hospital numbers.

Between 1June and 30 June, the number of people hospitalised almost halved from 16,088 to 8,451 likewise the numbers in ICU fell by 50% but are now rising again which is understandably worrying medical staff. On average, 200 new people are entering hospital every day, according to official figures, compared to 113 at the beginning of July.

According to Véran, 96 % of people who end up with the most serious forms of Covid are not fully vaccinated.

While increases in low numbers appear disproportionately higher when listed as a percentage, Covidtracker also demonstrates that the number of deaths was falling much more quickly at the end of June, and has stagnated in recent days. 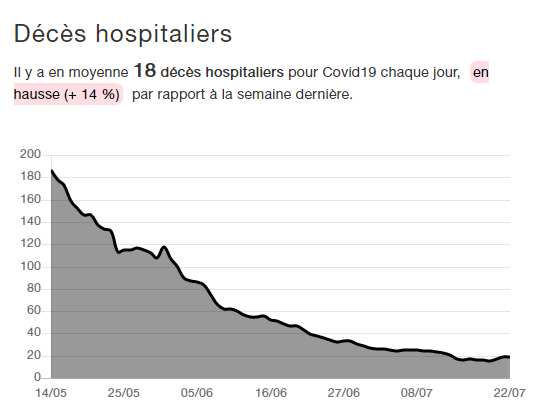 What might mitigate against hospitalisations and deaths is the number of people who are now vaccinated against Covid-19.

Castex has set a new target for vaccinations – 50 million by the end of August.

And the Health Ministry’s figures show that more than 39 million people in France have already had at least one dose of vaccine – with more than 32 million fully inoculated.

However, there is some way to go before ‘herd immunity’ levels are achieved.

Some of the increase can be put down to President Emmanuel Macron’s address on 12 July, when he announced plans to extend the health pass. An immediate and sharp rise in bookings followed his announcement.

Almost six million French people made an appointment to receive a first vaccine dose in the nine days after President Emmanuel Macron’s speech announcing the new measures. Most of those will be fully vaccinated by the end of August, taking the total number a good chunk of the way to the government’s 50 million target. In addition, plans have been mooted to take vaccination services into colleges and lycees early in the new school year to catch unvaccinated school children aged 12 and over as soon as possible.

But not everyone is sure that a return to normality will be rapid, even with vaccines. Noted immunologist and government Covid adviser Jean-François Delfraissy has warned that new variants could slow things down.

The return to normal life may be 2022, or 2023. We will win, but I think we have entered into something longer.