One from the vaults: Postcards from Pays Basque III 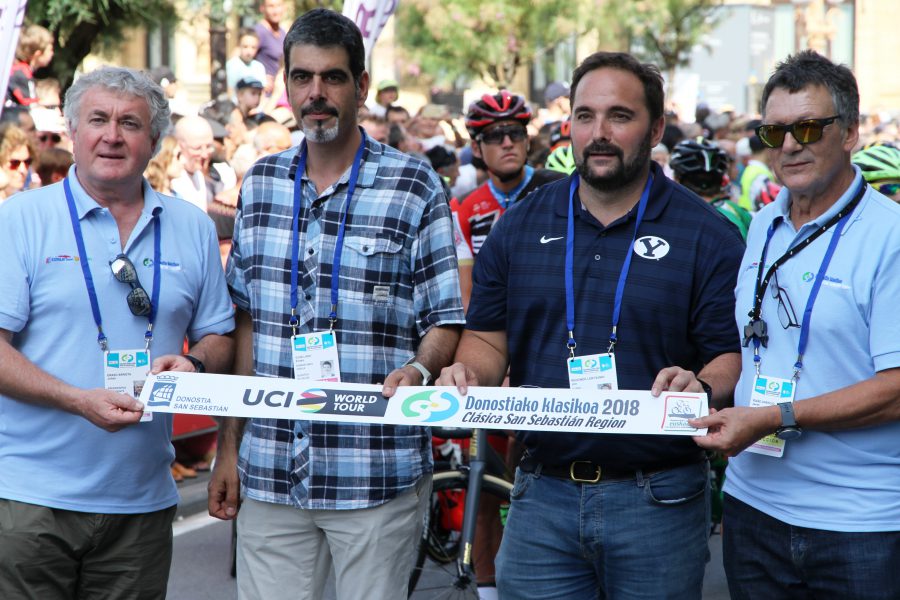 This is the third in this series of posts about our maiden trip to the Basque Country in 2010 which was specifically to watch what has become one of my favourite cycle races. Sadly, I wasn’t be there this year but hopefully next.

For the last few days of our vacation we moved to a hotel in San Sebastian or, more specifically, a hotel on a hill (10% gradient) overlooking San Sebastian. The morning we arrived it had just started to drizzle. Undeterred, my beloved set off on his bike to explore the neighbourhood with me in hot pursuit. As you know, I greatly dislike cycling off into the great unknown without either a map or a specific route in mind. My beloved shares none of my inhibitions and after we’d twice circumnavigated an industrial estate and the university, it started to pour down in earnest.

Enough, I decided to beat a hasty retreat back to the hotel but not before my beloved managed to leave me stranded at a traffic junction. Fortunately, the rain cleared in the afternoon and we were able to explore the town on foot, descending via a rather quaint funicular railway. I also managed to persuade my beloved to acquire a map of the area so we wouldn’t get lost again.

Friday dawned bright and sunny and, with the aid of afore-said map, we set off to explore the roads west of the hotel. It was a truly scenic ride along the cliffs to the town from whence cometh Txakoli. As is normal in this region the road was particularly undulating. In fact on the reverse trip my beloved advised that I’d scaled short inclines of  22% and  20%. I can’t wait to get back and ride Col de Vence.

Friday lunchtime we dined at Arzak, a three Michelin starred restaurant which has been in the same family for a number of generations. Getting a table had not been easy. After a number of rejections I had finally told the restaurant when we’d be in San Sebastian and they had advised when they had a free table. They had then rung me no less than three times in the last ten days to confirm the booking.

As the taxi drove up outside the restaurant, I had a frisson of alarm. From the outside, it resembled an Italian restaurant stuck in a 70s time-warp. Fortunately, the interior was much more reassuring. Everything was beautifully and thoughtfully put together. Nothing jibed and the whole performance was wonderfully choreographed by the staff.

We were able to assemble our own tasting menu by having halves of two different dishes for each course. The pre-lunch nibbles and petit fours were truly divine (my long time bell-weather test of a good restaurant), as indeed was each of the courses. It was so delicious I was almost (but not quite) tempted to lick the plate so as not to waste a single drop. It was truly a feast for the senses. My beloved said it was like visiting a modern art gallery where you got to eat the exhibits.

I’ve bought the cookery book (fortunately in Spanish not Basque) so that I can marvel once again at the ingenuity of the dishes and incorporate a few of the ideas into my own cooking. However, these are not dishes that you can easily replicate in a domestic environment, even if one had the requisite skills. As a nice touch, we were presented with copies of the menu of our meal as we departed, replete and happy.

After a long walk, we returned to the hotel still sated. As we did so we saw a number of riders for the following day’s Classica San Sebastian out stretching their legs on the bike and familiarising themselves with the run in to the finish.

← Cee’s Flower of the Day #133
The Musette: roasted artichoke salad →

7 Comments on “One from the vaults: Postcards from Pays Basque III”