One from the Vaults: The Basque Country- Vitoria-Gasteiz 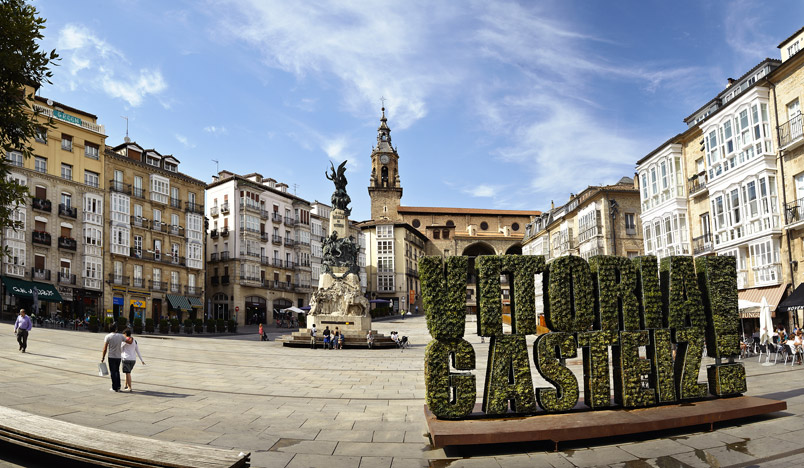 Yes, I’m still wallowing in the Basque Country, this time I’m in its Green Capital Vitoria-Gasteiz.

We’ve been visiting the Basque country at least once every year since 2010, but not this year. I’m finding it hard to come to terms with this and keep looking at our respective diaries to see if I can squeeze in a week-end here or there. So far I’ve not had any luck.

It’s a poor substitute, but I decided I should write a few more pieces about the area and where better to start than Vitoria (Spanish) – Gasteiz (Basque), capital of the Autonomous Region of Euskadi which provides a heady mix of nature and culture, history and modernity, sports and gastronomy.

We’ve never stayed in the town but have often visited it during either the Vuelta a Espana or Vuelta al Pais Vasco, two professional cycle races. In fact, the first time we visited in 2011, the race finished in the newer part of town – rather less impressive – and we never saw its magnificent medieval Old Town until a subsequent visit.

Vitoria’s shield-shaped Old Town is surrounded by a fortified wall, set on a hill, that is the only elevation in the plain of Álavasits which probably gave the city its name. After being a Basque settlement first, then a Roman one, Vitoria was abandonned until more than eight centuries ago, when Sancho VI “The Wise” of Navarre  – I rather like that title – founded the city, which is a jewel of medieval architecture. In addition to the old timber-framed houses, there are superb medieval and Renaissance palaces, such as Bendaña, Casa del Cordón, Escoriaza-Esquivel, Villasuso Palace and Montehermoso Palace and it has not one but two cathedrals! 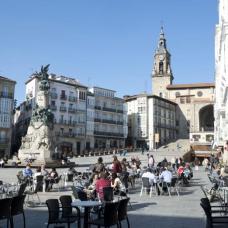 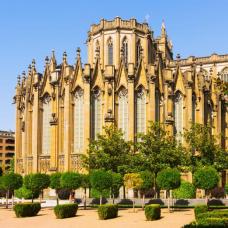 The treasures of the medieval centre are undoubtedly the Santa Maria cathedral, and the church of San Miguel, which presides over the Plaza de la Virgen Blanca (header photo), the city’s patron saint. Here some of the most typical streets of the old town converge with city’s 19th-century city expansion and it is surrounded by old houses with glass verandas. At its centre stands a monument commemorating the Battle of Vitoria, one of the more famous events of the Napoleonic wars, to which Beethoven dedicated his Opus 91.

The Gothic Cathedral of Santa Maria is not just any old church (Ken Follet researched scenes for the sequel to Pillars of the Earth here), it’s a 14th-century Gothic building with a 17th-century tower. Under the portico are three open doorways decorated with statues and reliefs. In the interior, chapels containing Gothic, Flemish and Italian Renaissance images include paintings by Rubens and van Dyck.

Visiting is a fascinating experience due to a unique “Open for Construction” project. Closed in 1994 because of serious “structural problems” someone came up with the idea of offering guided tours of the restoration process. Visitors don hard hats and follow the extremely knowledgeable guides along scaffolded walkways via serpentine stone staircases, from the crypt to the bell tower, where you’ll find marvelous 360 degree city views. If only I could find the photos I took on Dropbox! 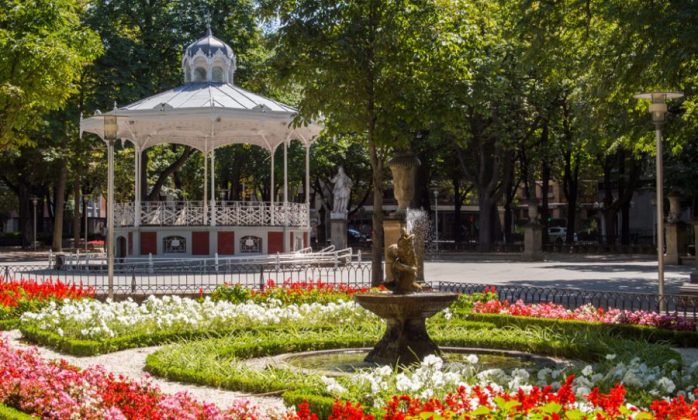 Designated “The Green Capital of Europe” in 2012, Vitoria boasts the largest number of square metres of green space per inhabitant. A natural habitat that can be enjoyed by walking the Anillo verde, (the “green ring”), an extensive network of 47 km of green paths connecting the six major parks of the city, including the Florida Park, a beautiful urban garden just a few steps from downtown, and the wetlands of Salburua, a paradise for migratory birds.

Vitoria-Gasteiz will also delight art lovers. The city has several major museums, including the Bibat, which houses the Fournier Museum of Playing Cards. The city is known for the manufacture of playing cards and more than 6,000 cards are displayed in the museum.

There’s also the Museum of Archeology at Bendaña Palace, and the Artium, whose permanent collection is considered one of the best and most important contemporary collections of Basque and Spanish art (Miró, Picasso, Dalí, Chillida etc). Art also ventures into the open air, with gigantic frescoes that adorn the walls of some buildings in the medieval district.

In Plaza Arca, on the Calle Dato, half-way between the Plaza Nueva and the train station, there’s a bronze sculture called  “El Caminente” (the walker) which for the Vitorianos, is a symbol of the city. Created by Juan José Eguiazábal in 1985, it represents a person who’s arrived on foot in the city and likes it so much that he decides to stay. 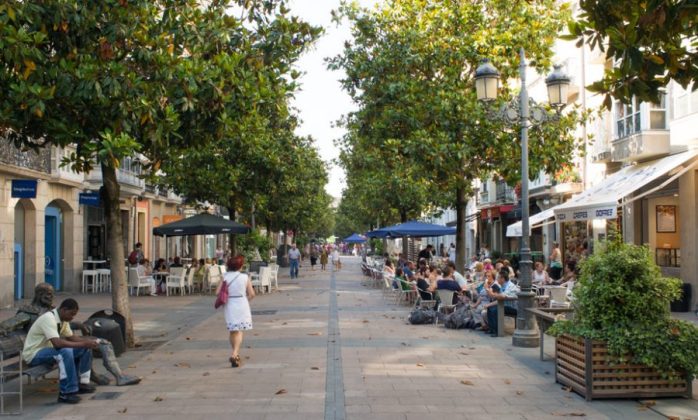 Vitoria-Gesteiz, like everywhere in the Basque Country, is a gastronomic tour de force. In 2014 it nailed the Spanish Capital of Gastronomy award – no mean feat! Its cobblestone lanes are lined with a plethora of bars displaying a selection of the irresistible bite-sized creations (pintxos = tapas) which run the gamut from a humble tortilla to gastronomical mini-bites such as a coddled free-range egg with shaved truffles, which pair perfectly with an aromatic Rioja Alavesa or Txakoli, the indigenous young, fruity and sparkling white wine.

The city is also the capital of Alava which is home to Riojan wines. Indeed, the city’s a good starting point to venture into Rioja where you’ll find world-renowned wineries paired with impressive architecture, such as Ysios (by Santiago Calatrava) and  Marques de Riscal (by Frank Gehry), plus lovely old towns such a Laguardia, which we visited last year. There are further heritage sites including the Neolithic remains of Aizkomendi, Sorginetxe and La Chabola de la Hechicera; Iron Age remains such as the settlements of Lastra and Buradón; antique remains such as the settlement of La Hoya and the salt valley of Anana; and countless medieval fortresses such as the Towers of Mendoza and Varona. You know what, I think I need to plan another visit sooner rather than later!

28 Comments on “One from the Vaults: The Basque Country- Vitoria-Gasteiz”