If you’ve been to France, you’ll have seen typical brightly coloured Provencal fabrics everywhere. But where did they originally come from?

If you’ve read any of my posts about the places I’ve visited in south-east France you’ll know that it has been attacked by Greeks, Romans, Goths, Franks, Vandals and Saracens. Indeed, British writer Lawrence Durrell wrote:

Every variety of invader seems to have subjected it to the extremes of pillage, destruction, naked war. It was as if its beauty was too much for them and they went berserk.

Traders followed the invaders. In the early 1600s Portuguese and Dutch ships put in at Marseille with, among other exotic imports, calico, chintz and printed cottons from India. Known even in English as Indiennes, the gaily coloured prints were immediately embraced by Louis XIV. In 1664 he had his minister Colbert form the Compagnie des Indes Orientales to import Indian fabrics and goods. The company sent spies to India to learn the secrets of printing and dyeing the cottons.

The nobility adopted the colourful Indiennes prints for court dress. Molière satirised the vogue in his first production of Le Bourgeois Gentilhomme in 1670, outfitting his hero in a rainbow of printed Indiennes, intentionally worn upside down.

French textile producers set up workshops to make Indiennes and began a thriving business. They carved flowers, arabesques and other motifs on laminated blocks of fruitwood, then applied the blocks to the cotton by hand, one colour at a time, using natural dyes made from plants and minerals. 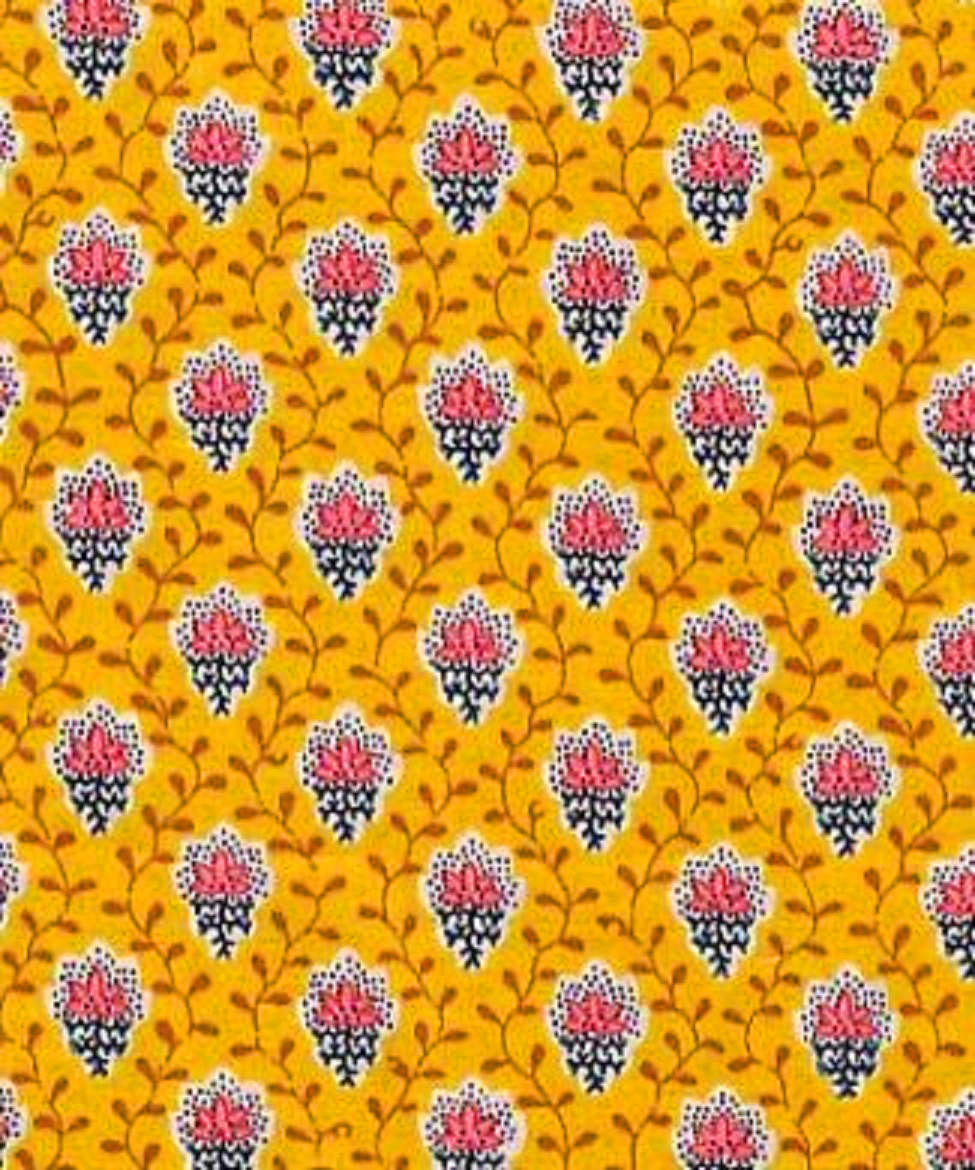 The colours were strong and vibrant: blue the colour of a Gauloise cigarette box, mustard yellow, terra-cotta red and raspberry pink, lavender and bright green.

Over time new motifs were incorporated including local vines, flowers, insects and herbs. Indiennes were worn in layers, as scarves, aprons, blouses and long quilted skirts. Men wore vests and doublets. In Provence one could determine people’s social rank by the style of Indienne-bedecked clothes they wore.

By the late 17th century French-made Indiennes had achieved such popularity that jealous wool and silk makers persuaded the government to ban their production in France. Though unevenly enforced, the prohibition endured from 1686 until 1759.

After the royal ban Provençal manufacturers moved to the Comtat Venaissin, a part of France near Avignon that was under the jurisdiction of the popes until the French Revolution, and thankfully flourished.

Souleiado is not the only producer of such prints today, but it is the oldest, established in 1806 in a former Capuchin convent near Tarascon, an ancient Roman city on the banks of the Rhone. Under different names the company has been owned by just a handful of families for over two centuries, never ceasing production despite wars and revolutions.

In 1916 it was bought by Charles Henri Demery, who passed it down to his nephew Charles Demery in 1937. In 1939 it was named Souleiado; the word in old Provençal means ”a ray of sun shining through the clouds after a rain.” The printing workshops were installed in a 17th century limestone hôtel particulier (a mansion situated between a courtyard and a garden) in the centre of Tarascon, where it remains today.

The younger Demery adopted the Indiennes for home decoration, fashion, faience and accessories. In 1950 he opened the first Souleiado boutique in Florence. Demand so exceeded supply that in 1977 he began to have the cottons printed, instead of hand blocked.

Michel Biehn, a decorator based near Tarascon who owns la Maison Biehn, a source of rare vintage Provençal textiles and costumes, wrote a 1987 book on traditional costumes made with Indiennes. He claimed that Charles Demery brought the company [Souleiado] back to life.

Americans embraced Souleiado in the 1970s after Pierre Moulin and Pierre LeVec started displaying the colourful prints in their Greenwich Village antiques shop, Pierre Deux. In 1984 these dealers wrote (with Linda Dannenberg) ”Pierre Deux’s French Country,” a book that popularised Souleiado along with Provençal antiques, pottery, gardens and décor.

When Charles Demery died in 1986, his son Jean-Pierre took over. He opened a private museum in the company’s Tarascon headquarters that is an ode to Provence, with 18th century costumes, a reconstructed dye-making and printing workshop, pottery and a display of the 40,000 18th and 19th century carved wood blocks. The museum offers classes in block printing, Provençal quilt-making, embroidery and lacemaking.

In the 1990s Souleiado started to fail financially and it was subsequently purchased by Louis and Colette Nicollin who took it back to its roots by hiring a Paris couturier team, Vincent Millet and Yannick Flageul, to create a women’s ready-to-wear line with hand-blocked prints from the Souleiado archives.

We went back to the original wood blocks and tried to interpret them in a new way by printing by hand on denim. We are using traditional materials and motifs in a new way.

But the company’s story doesn’t end there. In April 2009, Daniel and Stephane Richard, both born in Provence, buy the company and drive forward its revitalisation and brand extensions.

With 20 shops in France – 18 in the south, one in Paris and another one in Saint-Germain-en-Laye, 23 points of sale in Japan and a flagship store in Tokyo, a brand new store in Southampton NY, USA and in Hong Kong – and with projects in Italy and Switzerland, Souleiado is back with a bang.