Now that I’m back home I can tell you more about our most recent travels. Much as I love where I live it was so nice to experience a change of scenery. This wasn’t our first stay in Peschiera. We overnighted here on our way to Seefeld in December 2017 and again in 2018 while watching the Giro d’Italia. We find it a convenient stopping off point. So much so that we topped and tailed our entire trip at the hotel.

Peschiera del Garda is on the lower shore of the Veronese Lake Garda, 25 km (151/2 miles) from Verona. It is the most eastern city of the Veneto region, at the foot of the Morainic hills, where the waters from Lake Garda flow into the Mincio river. When Lombardy-Venetia was under Austrian rule, Peschiera was the northwest anchor of the four fortified towns constituting the Quadrilatero, which connected the fortresses of Peschiera, Mantua, Legnago and Verona between the Mincio, the Po, and the Adige Rivers. The  city’s massive Venetian defensive systems have been a UNESCO World Heritage Site since July 2017.

The Roman name of Peschiera was Arilica. Although there have been pile-dwellings here since the Bronze Age, the place developed greatly in Roman times thanks to its favourable position for trade. Arilica in fact was along the Via Gallica, the Roman road that connected Verona with Milan and then continued eastwards, connecting Verona with the Via Postumia, and westwards, from Milan to Gaul (France).

In Arilica there was a very active boat service on boats that connected all the lower part of the lake and also continued up north to the mountains. The more recent excavation shows an urban structure made up of fairly small and modest dwellings, perhaps some warehouses and storage for goods, connected by paved alleys. Nothing to do with the magnificence of the Roman villas of Sirmione and Desenzano. After all, Arilica was a village of fishermen and boatmen.

The fortress at Peschiera played a prominent part in most military campaigns conducted in northern Italy after 1400, especially during the Italian campaigns of the French Revolutionary and Napoleonic Wars. At the Battle of Peschiera fought on 6 August 1796, the day after a major French victory at the Battle of Castiglione, a French force commanded by general Masséna drove out the Austrians. After the Siege of Peschiera, during the First Italian War of Independence, it was taken by the Piedmontese from the Austrians, on 30 May, 1848, following a gallant defence by general Rath lasting six weeks.

What to see in Peschiera

There are a number of important and interesting sights in the town which attest to its importance as a former stronghold.

The Brescia gate amply demonstrates the Bastion’s (fortress) imposing brick walls which rise up from the canal, acting as a moat around the fortifications. The walls are massive and built on oak poles planted at the bottom of the canal; a typical Venetian  construction technique.The wood, embedded in the mud, does not come into contact with any air, so it doesn’t rot instead it becomes fossilised.

The Tognon Bastion, which has the typical spearhead shape of Italian Renaissance fortresses, is the most beautiful and best preserved part. The introduction of gunpowder and cannons forced a rethink on the shape of fortresses so that they could better withstand artillery. Peschiera is a splendid example of this redesign. To reduce the size of the artillery target, military architects lowered the walls. To reduce the angle of incidence of the bullets, they tilted the walls backwards and enlarged them to better withstand the impact. They also changed the fortress’ geometry to polygonal to have more oblique surfaces on which cannonballs would slide away.

The Tognon bastion looks just like the bow of a ship cutting through water. Carved onto the bastion is Venice’s symbol of St Mark’s winged lion. Napoleon’s army damaged it when attempting to erase what they considered a symbol of the Ancient Régime.

From its raised position, the bastion provides a splendid view of Lake Garda and the surrounding area. During its Habsburg domination, the Austrians placed here an optical telegraph here to communicate with HQ in Verona, triangulating with the half-way fortress of Pastrengo. 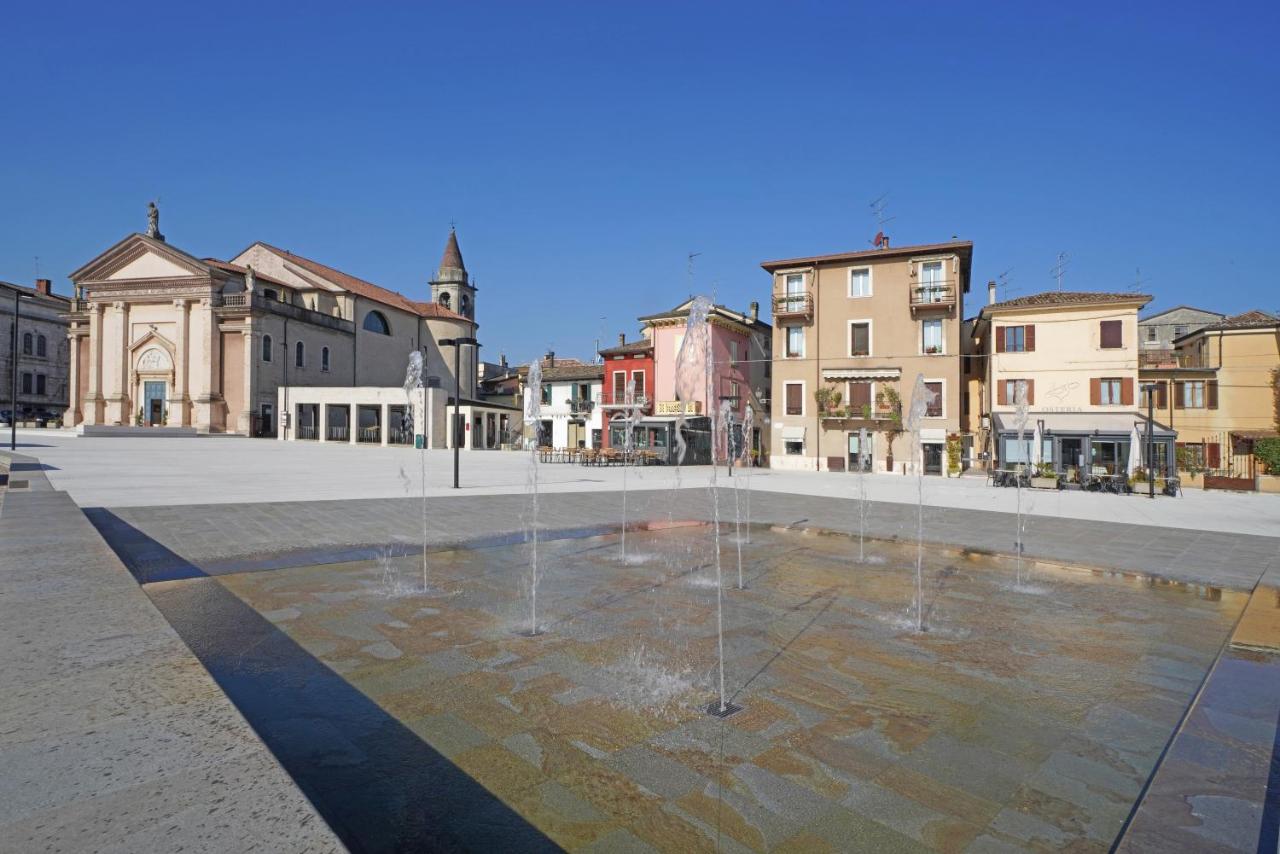 Going back down to the port of Peschiera you walk through the ancient village to get to Piazza Savoia, the old parade ground where, on one side, there is the old military prison, in use from 1866 until the late 90s. Originally built as an Austrian military hospital after the Second War of Italian Independence 1858-59 which, with its bloody battles, had shown the difficulties of taking proper care of the wounded.

The other building in the square is the church of San Martino built in the typical neoclassical style in vogue in 19th century.

From Piazza Savoia continue towards the Voltoni Bridge,  built by the Venetians to connect the two islands that make up Peschiera. In the middle there is the widest of the four canals. On the other side of the bridge is the Verona gate, the eastern entrance to the town. It is a large monumental gate designed by Michele Sanmicheli, a master of Renaissance architecture. The gate typifies the sober elegance of Sanmicheli’s style.,

More importantly perhaps, the commune is part of the Associazione Città del Vino (“Association of Wine Cities”). Peschiera is the main centre for the production of Lugana wine. Just outside the town you will find plenty of vineyards and the hotel where we stay on Laghetto del Frassino.

I’m told this the most important habitat for tufted ducks in Italy. I confess that I wouldn’t know a tufted duck unless it came up and introduced itself to me. However, there are a number of hides – is that the correct word? – where twitchers can spy the various birdlife on the lake.

Having already visited the town of Peschiera, this time, we chose to relax around the hotel’s splendid outdoor pool and quaff more of their refreshing Aperol Spritzs. And who could blame us?

← Musical Monday:
La bise is back: Many in France divided over return of cheek kissing →