On our recent trip to Budapest, we returned by way of Austria, making a maiden visit to Graz. We had no real expectations but were delighted with what we found.

Graz is situated on both sides of the Mur river in southeast Austria. About 150 km (93 miles) southwest of Austria’s capital Vienna, it’s the capital of Styria, the second-largest city in Austria and is perhaps best known as a university town, home to more than 60,000 students.

More importantly, its historic centre is one of the best-preserved city centres in Central Europe. Consequently, it’s a UNESCO list of World Heritage Site. Furthermore,  it was the Cultural Capital of Europe in 2003 and became a City of Culinary Delights in 2008. 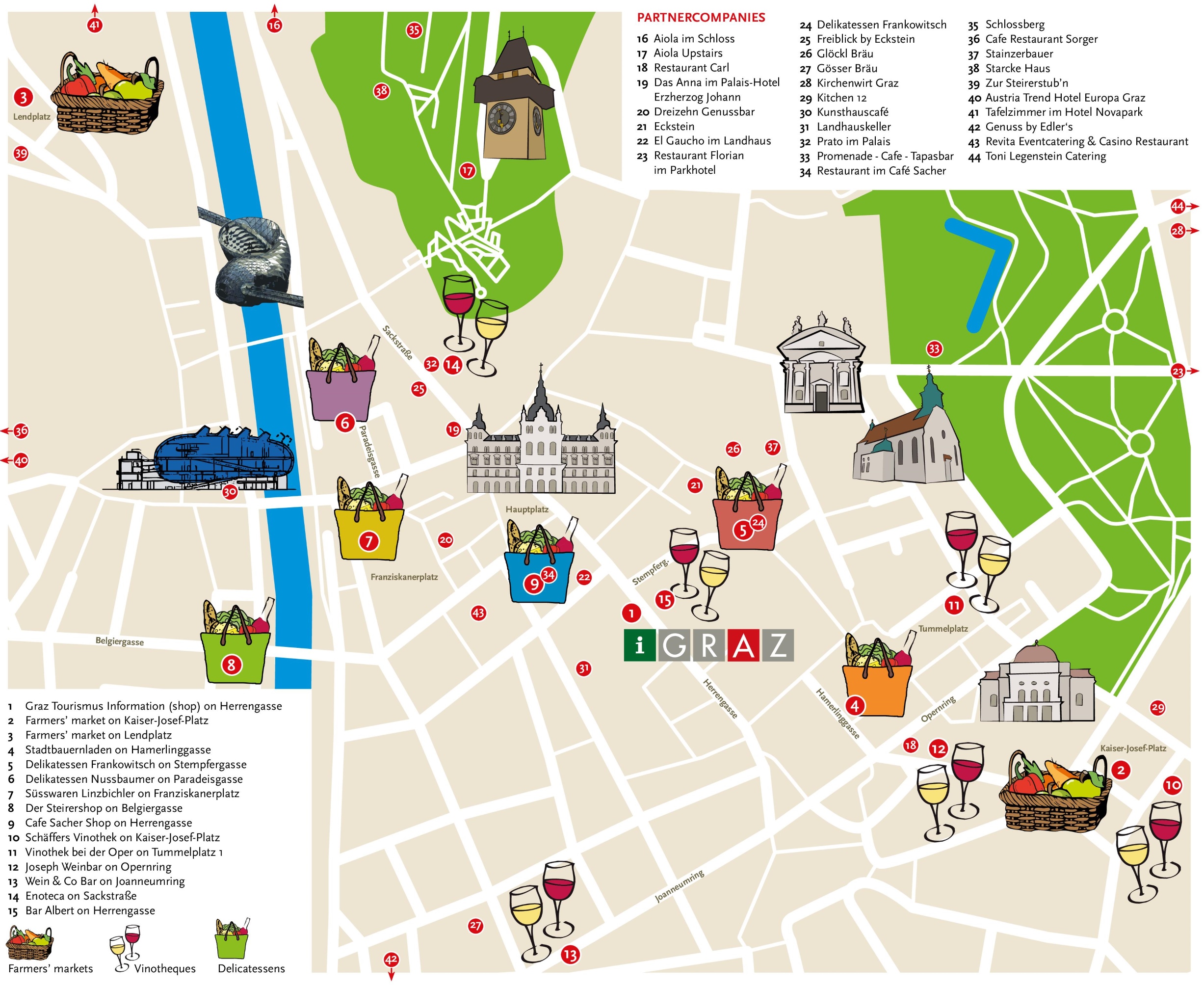 We spent two days here, staying in a delightful art hotel at the foot of the Schlossberg near the river and old town centre, soaking up its historical and gastronomic delights.

The oldest settlement on the ground of the modern city of Graz dates back to the Copper Age. However, no historical continuity exists of a settlement before the Middle Ages.

During 12th century, dukes under Babenberg rule made the town into an important commercial centre. Later, Graz came under the rule of the Habsburgs and, in 1281, gained special privileges from King Rudolph I.

In 14th century, Graz became the city of residence of the Inner Austrian line of the Habsburgs who lived in the Schlossberg castle and from there ruled Styria, Carinthia, most of today’s Slovenia, plus parts of Italy (Carniola, Gorizia and Gradisca, Trieste).

The city’s design and planning in 16th century were primarily controlled by Italian Renaissance architects and artists. One of the most famous buildings representative of this style is the Landhaus, designed by Domenico dell’Allio, and used by the local rulers as a governmental headquarters.

The University of Graz was founded by Archduke Karl II in 1585, it’s the city’s oldest university. For most of its existence, it was controlled by the Catholic church, and was closed in 1782 by Joseph II in an attempt to gain state control over educational institutions. Joseph II transformed it into a lyceum where civil servants and medical personnel were trained. In 1827 it was re-established as a university by Emperor Franz I, and was named ‘Karl-Franzens Universität’. More than 30,000 students are currently enrolled at this university.

Graz is centrally located within Styria, or Steiermark in German. Mark is an old German word indicating a large area of land used as a defensive border, in which the peasantry is taught how to organise and fight in the case of an invasion. With a strategic location at the head of the open and fertile Mur valley, Graz was historically a target of invaders, such as the Hungarians under Matthias Corvinus in 1481, and the Ottoman Turks in 1529 and 1532. Apart from the Riegersburg Castle, the Schlossberg was the only fortification in the region that never fell to the Ottoman Turks. Graz is home to the region’s provincial armory, which is the world’s largest historical collection of late medieval and Renaissance weaponry. It has been preserved since 1551, and displays over 30,000 items, including one of only seven fully preserved horse armours in the world.

From the earlier part of 15th century, Graz was the residence of the younger branch of the Habsburgs, which succeeded to the imperial throne in 1619 in the person of Emperor Ferdinand II, who moved the capital to Vienna. New fortifications were built on the Schlossberg at the end of the 16th century. Napoleon’s army  – he got everywhere – occupied Graz in 1797. In 1809, the city withstood another assault by the French army. During this attack, the commanding officer in the fortress was ordered to defend it with about 900 men against Napoleon’s army of about 3,000. He successfully defended the Schlossberg against eight attacks, but they were forced to give up after the Grande Armée occupied Vienna and the Emperor ordered to surrender.

Following the defeat of Austria by Napoleonic forces at the Battle of Wagram in 1809, the fortifications were demolished using explosives, as stipulated in the Peace of Schönbrunn of the same year. The bell tower and the civic clock tower atop the Schlossberg were spared after the citizens of Graz paid a ransom for their preservation.

Archduke Karl II of Inner Austria had 20,000 Protestant books burned in the square of what is now a mental hospital, and succeeded in returning Styria to the authority of the Holy See. Archduke Franz Ferdinand was born in Graz in what is now the Stadtmuseum (city museum).

In April 1945, while the heaviest Allied bomb raid of Graz occurred, the Gestapo and Waffen-SS committed a massacre against resistance fighters, Hungarian-Jewish forced labourers, and POWs at the SS barracks at Graz-Wetzelsdorf.

For the year that Graz was Cultural Capital of Europe (2003), new structures were erected. The Graz Museum of Contemporary Art (German: Kunsthaus) was designed by Peter Cook and Colin Fournier and is situated next to the Mur river. The Island in the Mur is a floating platform made of steel uniting both sides of the river. It was designed by American architect Vito Acconci and contains a café, an open-air theatre and a playground.

Our daily rambles took us over both sides of the river. On the one side are narrow alleyways with small shops, sun-drenched squares animated by street cafes. The other side hosts the future of Graz with its resolutely modern Kunsthaus nestled between ancient housing – a real dichotomy.

We easily walked well over 10,000 steps every day up, down and round the old town starting in Herrengasse, pretty much the focal point of public life in Graz which is lined with many beautiful buildings, including the Landhaus. Its arcaded inner courtyard ranks among the Italian Renaissance masterpieces.Indeed, Graz is famed for its romantic inner courtyards which often have magnificent doors, and you all know how much I love doors!

We enjoyed a magnificent bird’s eye view of the town’s red-tiled roof scape and the distant hills and mountains, by walking up the Schlossberg to see the Bell and Clock Towers, the Fortress, the Hackher Lion, the delightful gardens and much more besides.

With the unerring accuracy of a truffle hound, I found the best restaurant in town just 300 metres from our hotel and we ate there both nights. On both occasions a booking was necessary. I bought the chef-owner’s cook book and enjoyed a visual tour of his open kitchen.

We’ll be more than happy to return here, particularly as it’s close to where the Austrian MotoGP is held!

36 Comments on “Postcard from Graz”