One from the Vaults: Postcard from Manhattan II

This is the second-part of my 2010 trip to New York over Thanksgiving, part one was last Friday.

I have finally managed to wrest control of the laptop, and access to the internet,  from my beloved who, citing his business needs, has been hogging it for most of the trip. Seems fair – I knew I should’ve bought mine! I’m now sitting in the BA lounge looking forward to our flight back home via London. As usual, while I’ve enjoyed my trip, I now want to go home. 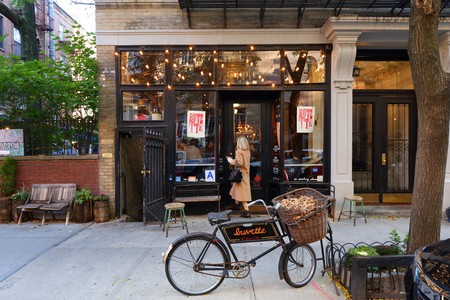 Over the past day or so I’ve been feeling markedly homesick and have been patronising  restaurants with a distinctly French flavour.  However, I’ve been enjoying breakfast at a local, typically American diner which obligingly has served me cinnamon flavoured porridge, made with water. The only problem has been portion control. The bowl’s  large enough for me, Goldilocks, the three bears and their next door neighbours.

I’m heading home footsore from pounding the pavements: I have walked Manhattan. I survived my cycling baptism of fire in the parks and on the streets of NY. Unbelievably, my credit cards are relatively unscathed. More importantly, NY afforded me the opportunity to catch up with a number of friends who, like my beloved, were in town for the Dental Show.

Yesterday I had lunch with one of my French girlfriends who moved to NY to work here at the beginning of this year. I was delighted to find her flourishing in her new role and environment. Not only that but she’s already landed some new, sizeable contracts. This is somewhat reassuring as I encouraged her to make the move.

I note with some disappointment that my beloved boys in claret and blue today succumbed, in the dying minutes of the match, to their blue-nosed rivals in the Carling Cup. We don’t seem to be faring too well at the moment and next up are Liverpool. Let’s hope our French manager Gerard Houllier can invoke the curse of the returning manager.

Thursday postscript: It appears we’re not getting home today after all!  Thanks to the snow, all flights to Nice have been cancelled. Not at all what we wanted to hear after a long haul flight. We’re booked on a flight tomorrow morning, but London airport travel chaos means planes are anywhere but where they’re supposed to be, so there’s no guarantee we’ll be homeward bound tomorrow. Keep your fingers crossed for me.

14 Comments on “One from the Vaults: Postcard from Manhattan II”