This is one of the grande old dames of Paris. Friends of ours know the chef sommelier and encouraged us to visit the hotel for lunch, dangling the promise of a look behind the scenes – I couldn’t resist!

The Hôtel de Crillon first opened in 1909 in a building dating back to 1758. Located at the foot of the Champs-Élysées, the Crillon along with the Hôtel de la Marine is one of two identical stone palaces on the Place de la Concorde. It has been listed since 1900 as a monument historique by the French Ministry of Culture.

With 78 guest rooms and 46 suites, the hotel also features three restaurants, a bar, outdoor terrace, gym and health club on the premises. The hotel was renovated from 2013 to 2017. In September 2018, the Crillon was officially designated by Atout France as a Palace grade of hotel.

The historic Hôtel de Crillon enjoys an unrivalled position overlooking Place de la Concorde. With its perfectly proportioned Neoclassical façade and architecture, the hotel was designed to captivate. It has dazzled generations of visitors and played host to some of history’s greatest events. The building has stood through the reigns of two French kings, the French Revolution, the rise and fall of the Napoleonic Empire and the birth of the League of Nations.

In 1758, King Louis XV commissioned the greatest architect of his day, Ange-Jacques Gabriel, to build twin structures overlooking Place de la Concorde. The result was a masterpiece of 18th century architecture. The two identical buildings, separated by the rue Royale, were initially designed to be offices of the French state.

The eastern building, Hôtel de la Marine, housed the headquarters of the French Navy until 2015.The western building that would become the Hôtel de Crillon was first occupied by Louis Marie Augustin, Duke of Aurmont, a famous patron of the arts. The building was further enhanced by its second owner, the architect Louis-François Trouard, who built the Salon de Aigles built in 1775.

On 6 February 1778, the building was the venue where the newly founded United States and France signed their first treaties. Americans Benjamin Franklin, Silas Deane and Arthur Lee met French diplomat Conrad Alexandre Gérard de Rayneval to conclude the French-American treaty that recognised the Declaration of Independence of the United States and a trade agreement.

In 1788, François Félix de Crillon (son of Louis de Crillon, Duke of Crillon) acquired the building for his home. However, the government of the French Revolution confiscated the property in 1791. During this period, the home was used by King Louis XVI and Queen Marie Antoinette.Two years later in 1793, King Louis XVI as well as Queen Marie Antoinette were put to the guillotine in the Place de la Concorde directly in front of the building.

Eventually, the building was returned to the Crillon family, whose descendants lived there for more than a century until 1904. In 1907, the Société du Louvre purchased the property and transformed it into a hotel. The building then underwent a two-year refurbishment under the supervision of architect Walter-André Destailleur. This included the purchase of two neighbouring buildings on the rue Boissy d’Anglas to enlarge the property. The new Hôtel de Crillon opened on 12 March 1909.

The hotel housed members of the American delegation to the Paris Peace Conference after World War I, including President Wilson’s key advisor, Edward House.

In March 2013, Hôtel de Crillon closed for a series of renovations led by Aline Asmar d’Amman. This project was designed to renovate and modernise the space. The renovation combined the hotel’s protected landmark features, such as the 19th century grand staircase and saloons, with modern styles and amenities. Tristan Auer, Chahan Minassian, Cyril Vergniol and Karl Lagerfeld worked alongside d’Amman on this €200 million project. Karl Lagerfeld designed Les Grands Apartements, the most extravagant suites on the property. The 2013 renovations lasted until July 2017. 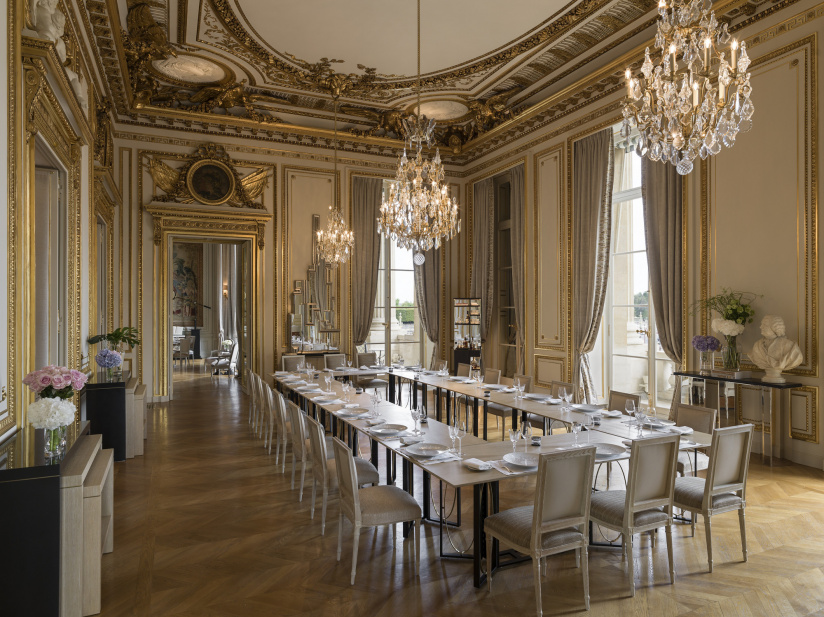 Until 2005, through Concorde Hotels & Resorts, the Hôtel de Crillon was part of the Société du Louvre (whose shares were listed on the Paris Stock Exchange) and was controlled by the Taittinger family holding company. The Starwood Capital Group bought the hotel from the former Taittinger group in 2005. On 23 November 2010, Starwood announced the sale of the hotel to a Saudi Arabian royal family member, Prince Mutaib bin Abdullah bin Abdulaziz Al Saud, though Starwood would continue to manage it.