Trip to the Louvre, and its gardens

Over the years I’ve spent plenty of time at the Louvre though I’m still not sure I’ve seen everything the museum has to offer. One of my favourite places is however its gardens and I enjoyed a wonderful stroll around here on Monday morning while my beloved was at a business meeting.

This former royal playground park has been a breath of fresh air in the French capital for almost five hundred years and today, everyone can enjoy a stroll through it.

It all began back in 1564. Nostalgic for the Florentine palaces of her childhood, Queen Catherine de’ Medici, Henri II’s widow, had a new palace and garden built outside the Parisian city walls. The tile factories (tuileries) that had stood on the chosen spot since the Middle Ages gave the new royal residence and garden their name.

The garden was completely redesigned in 1664 by Louis XIV’s landscape gardener, André Le Nôtre. Le Nôtre arranged the Tuileries Garden in three large sections – a structure that has remained unchanged over the centuries.

After several modifications and partial privatisation – notably by Napoleon I then his nephew Napoleon III – it was finally opened to the general public in 1871.

The same year, during the Paris Commune uprising, rioters burned the Tuileries Palace down to protest against royal and imperial power. The palace was never rebuilt………but the garden thankfully has survived to this day.

In 1990, a competition was launched for the renovation of the Tuileries. The winning duo – landscape architects Pascal Cribier and Louis Benech – added contemporary innovations to the historical garden while respecting Le Nôtre’s original design.

In accordance with the French garden tradition, the section of the Tuileries Garden nearest to the palace was designed to be admired from its windows. Called the Grand Carré, it was embellished with ponds and embroidery-like garden beds outlined by low boxwood hedges. Today’s simpler flower beds allow the estate’s gardeners greater freedom to express their creativity.

Then there is an open area surrounding the octagonal Grand Bassin and the horseshoe-shaped ramps that lead to the terraces bordering the garden. The Seine-side terrace serves as an embankment to protect the Tuileries from flooding; the symmetrical Terrasse des Feuillants runs alongside the rue de Rivoli.

The Tuileries Garden has been decorated with statues and vases since 18th century. Each successive government has removed or added sculptures according to changes in taste. Many of the groves are home to sculptures loaned by museums of modern and contemporary art. Also represented are famous sculptors from 7th century to the present day, including Antoine Coysevox, Auguste Rodin, Jean Dubuffet, Giuseppe Penone and Louise Bourgeois.

Specialised conservators are responsible for the maintenance of the sculptures. When necessary, the most fragile marble works are moved to the shelter of the Louvre – to the Cour Marly and Cour Puget (Richelieu wing) – and replaced in the garden by replicas. 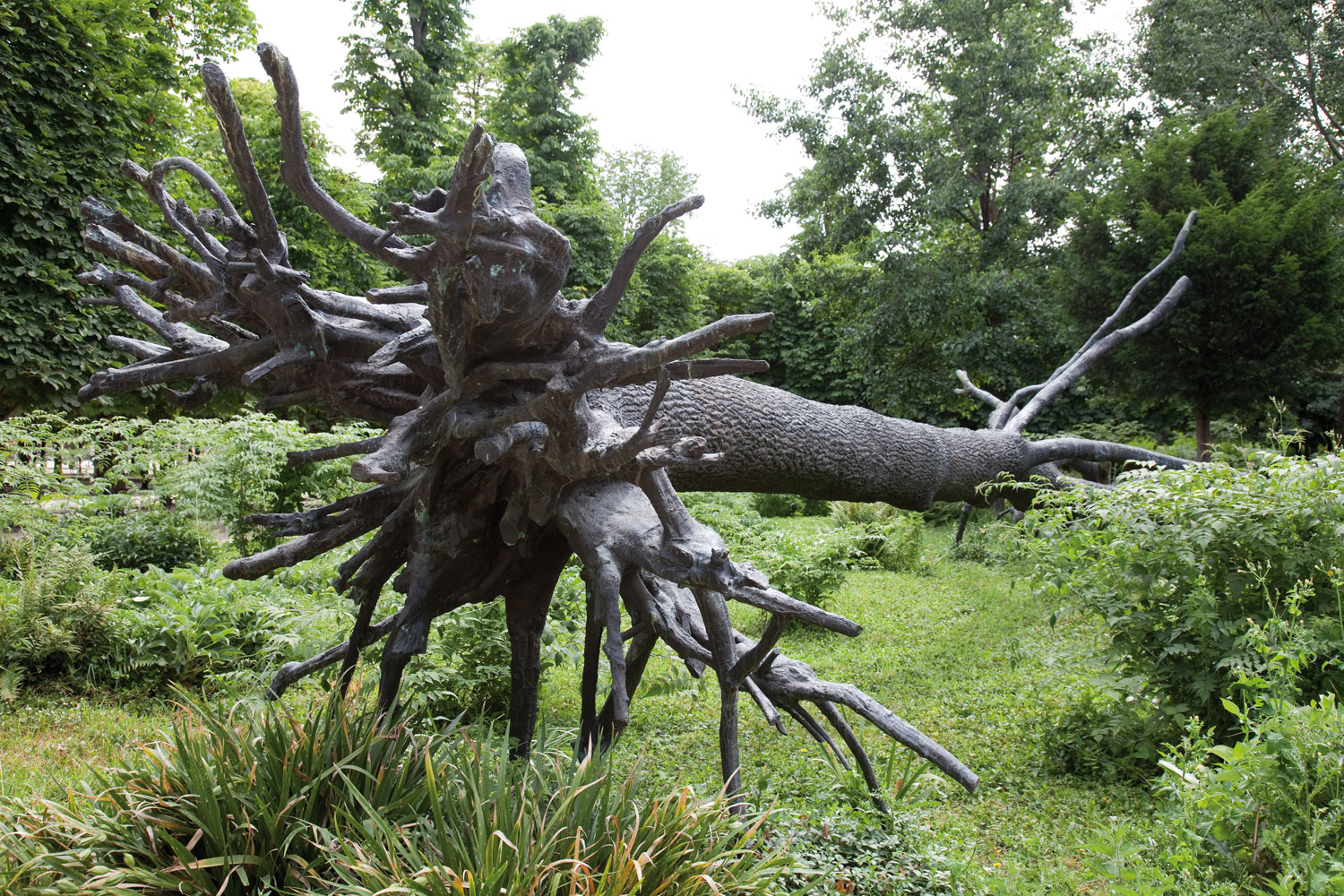 Giuseppe Penone, The Tree of Vowels 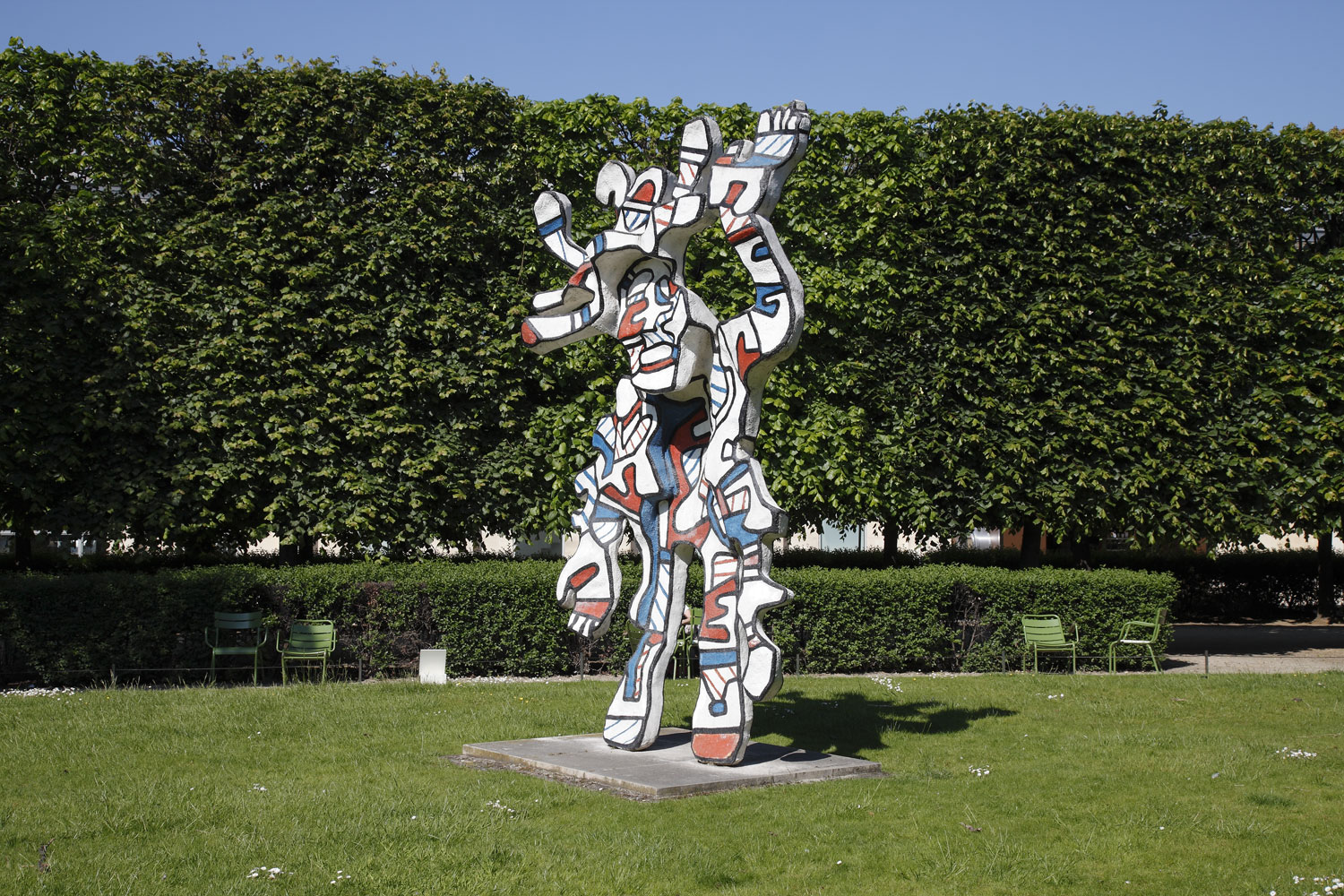 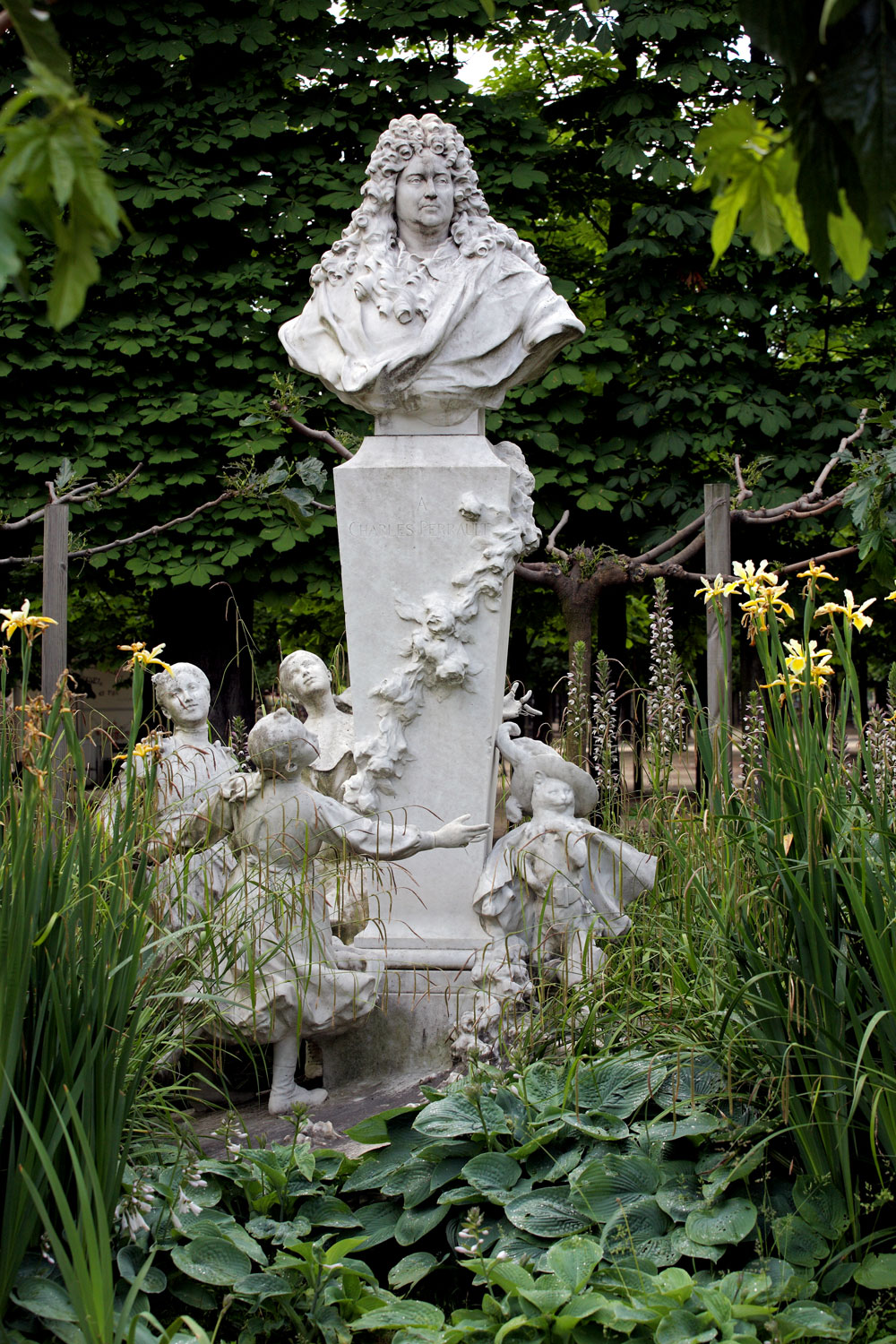 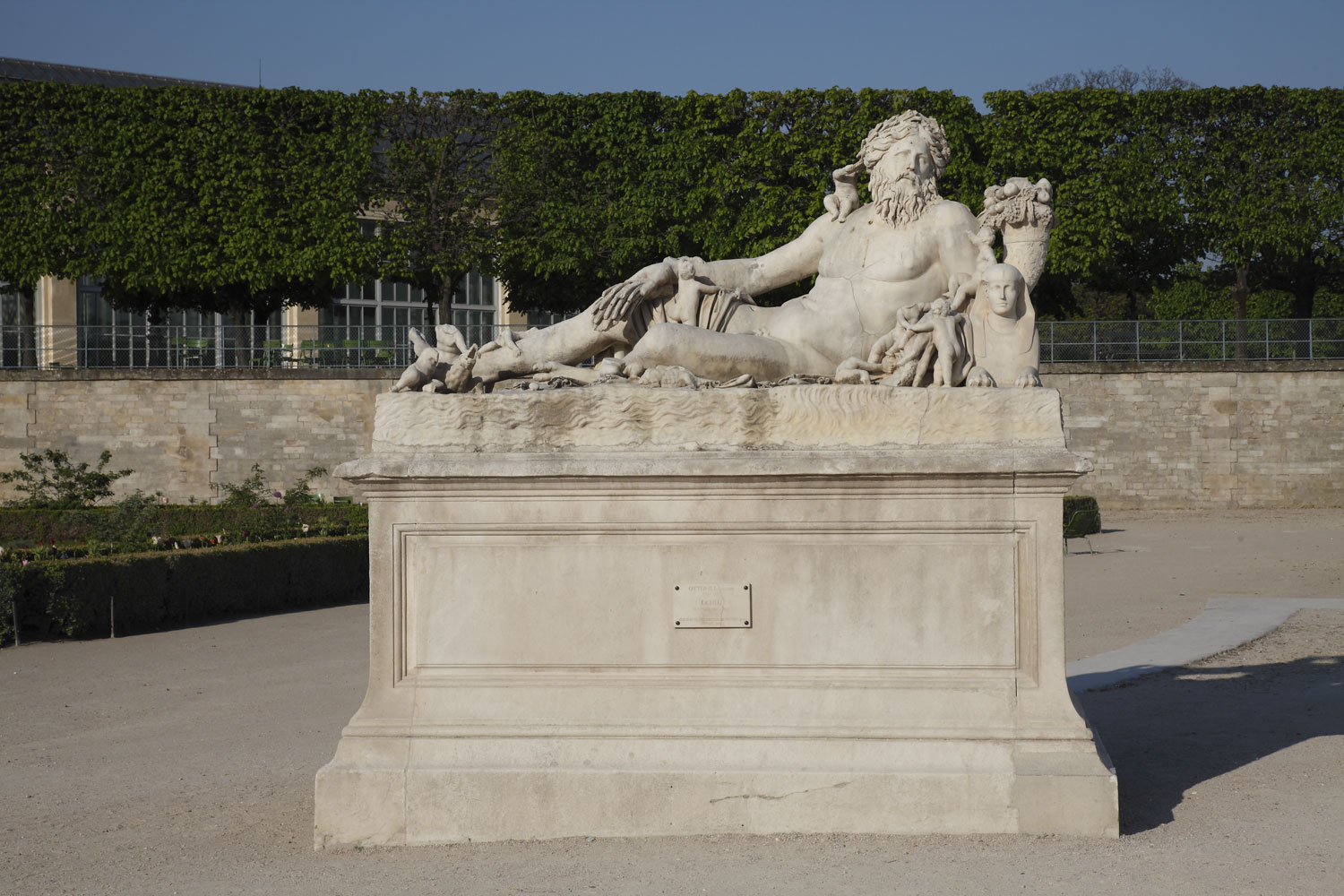 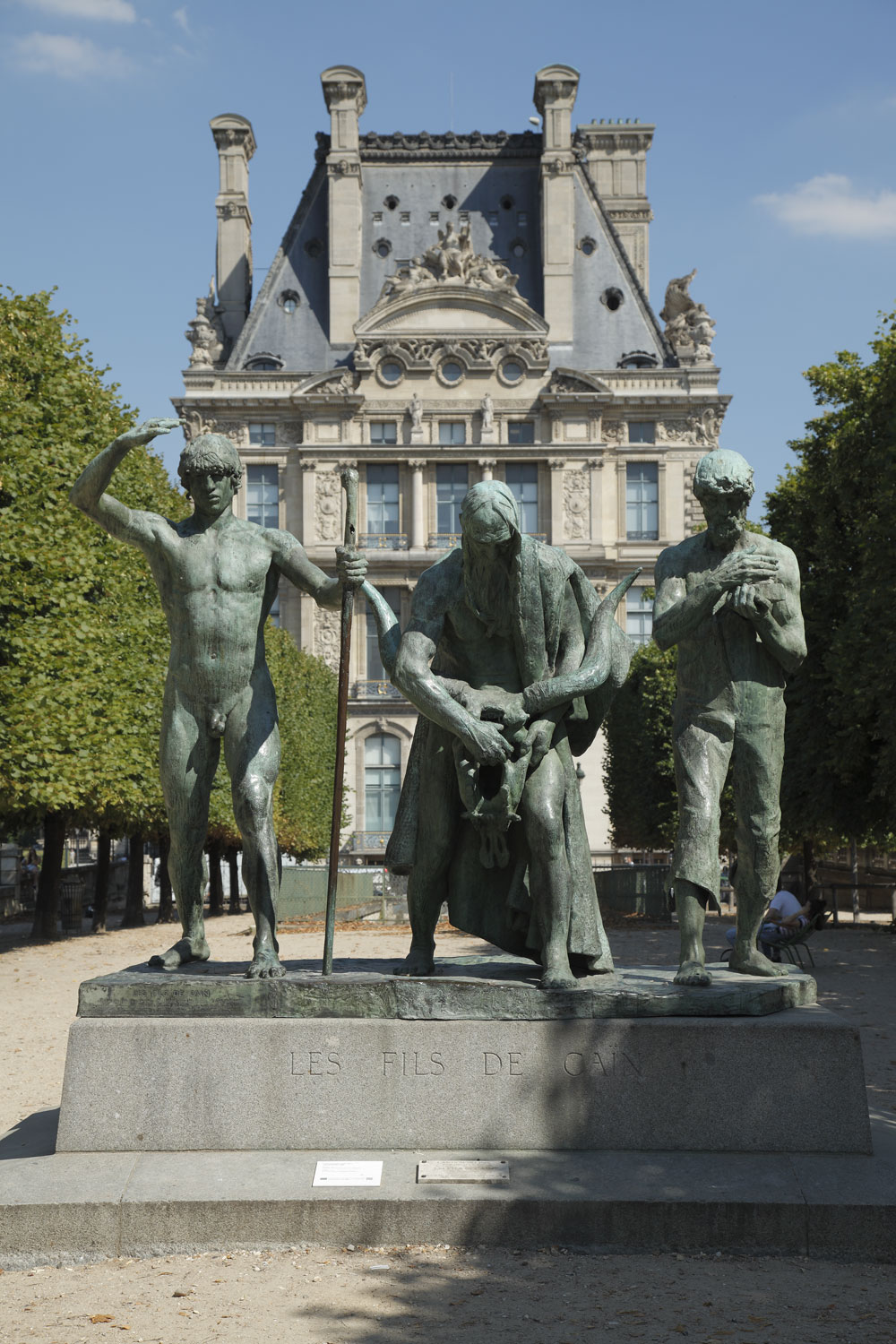 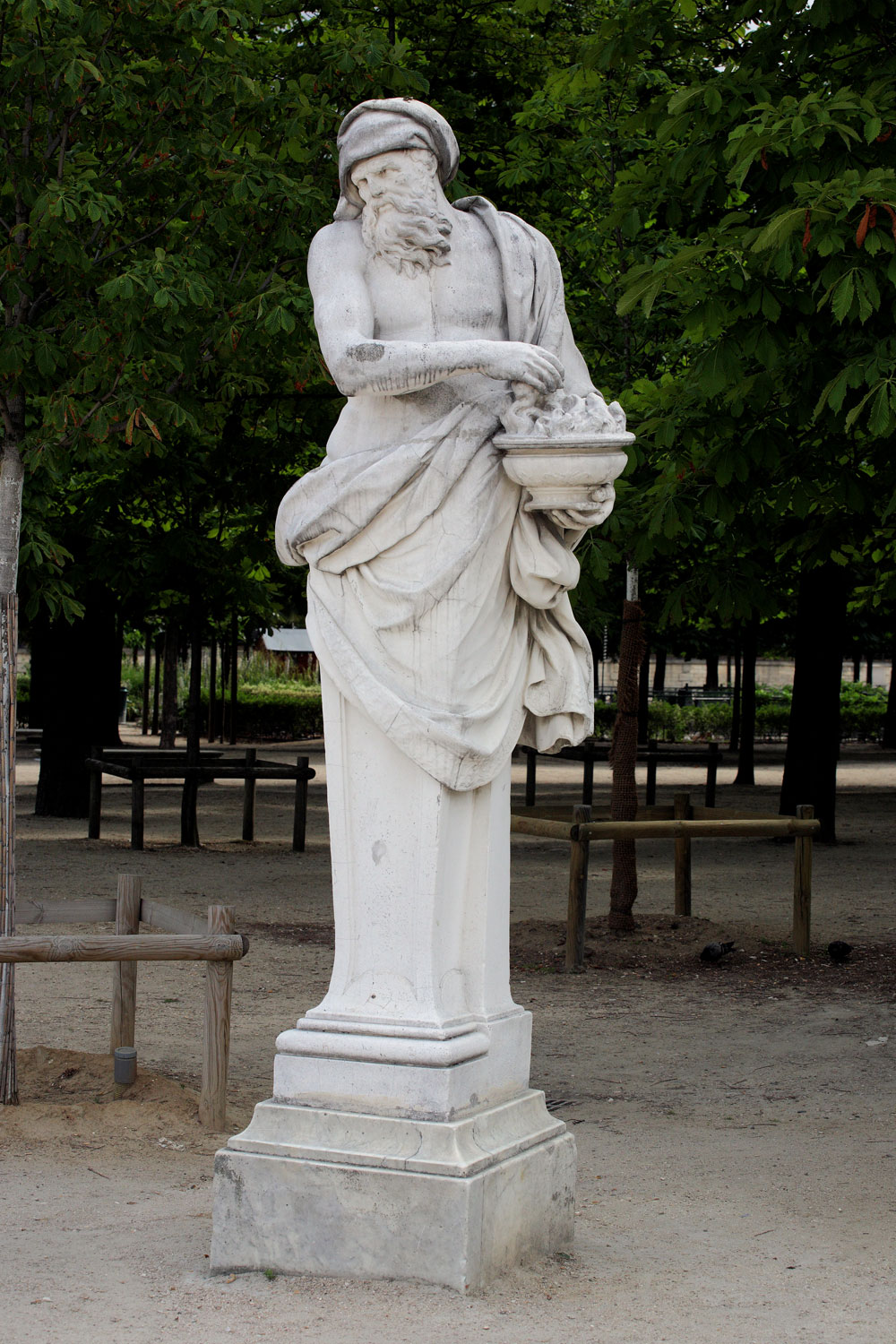 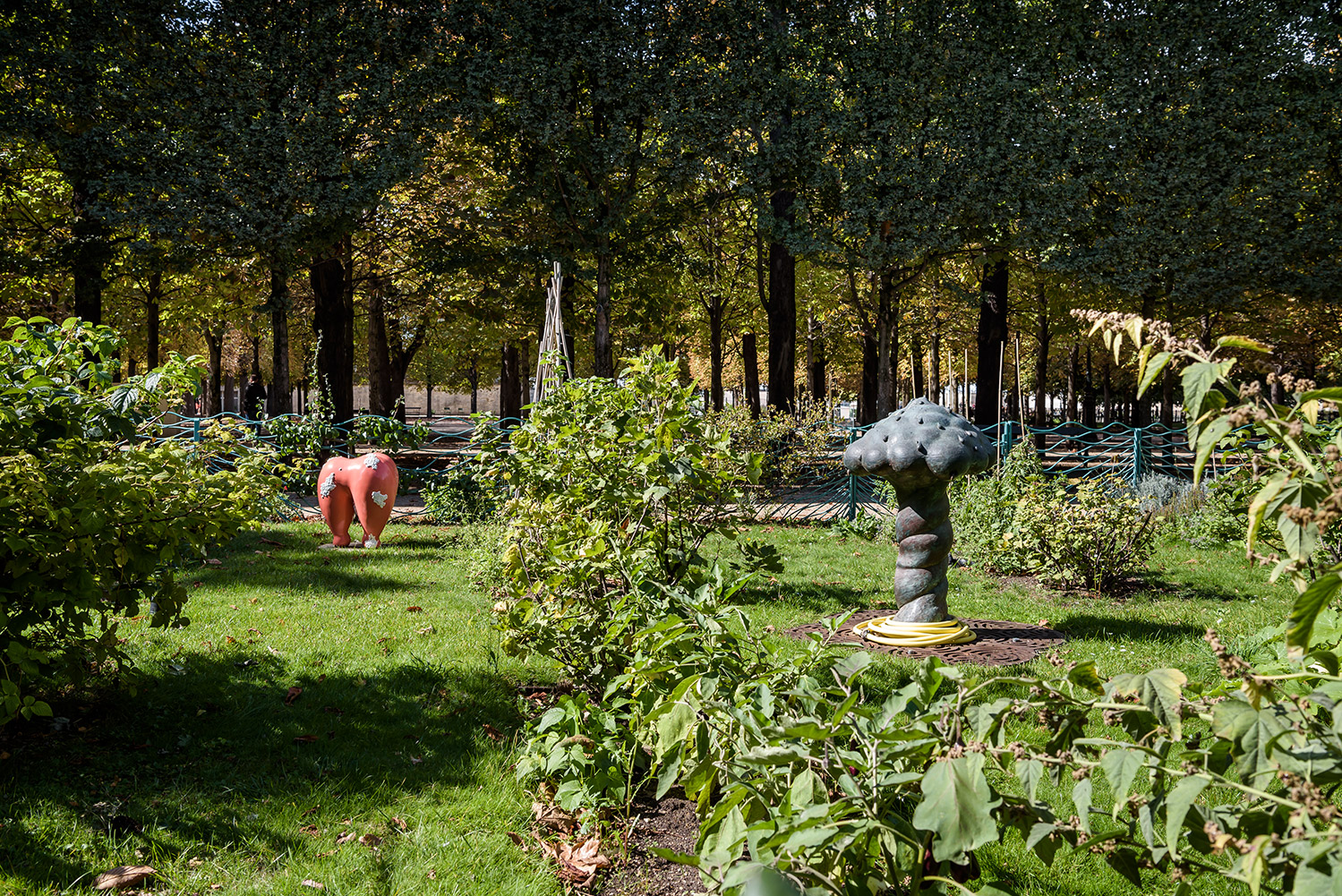 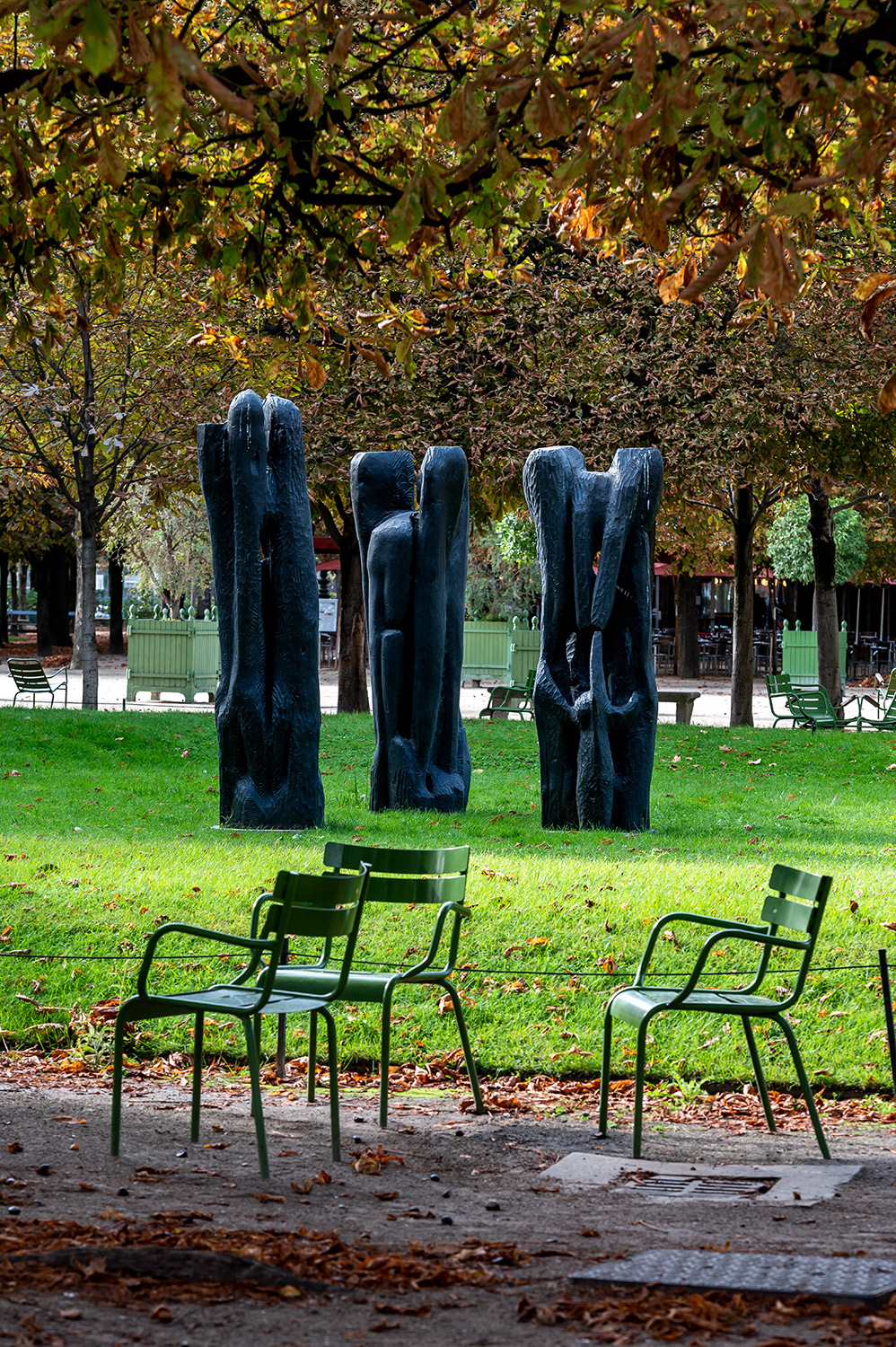 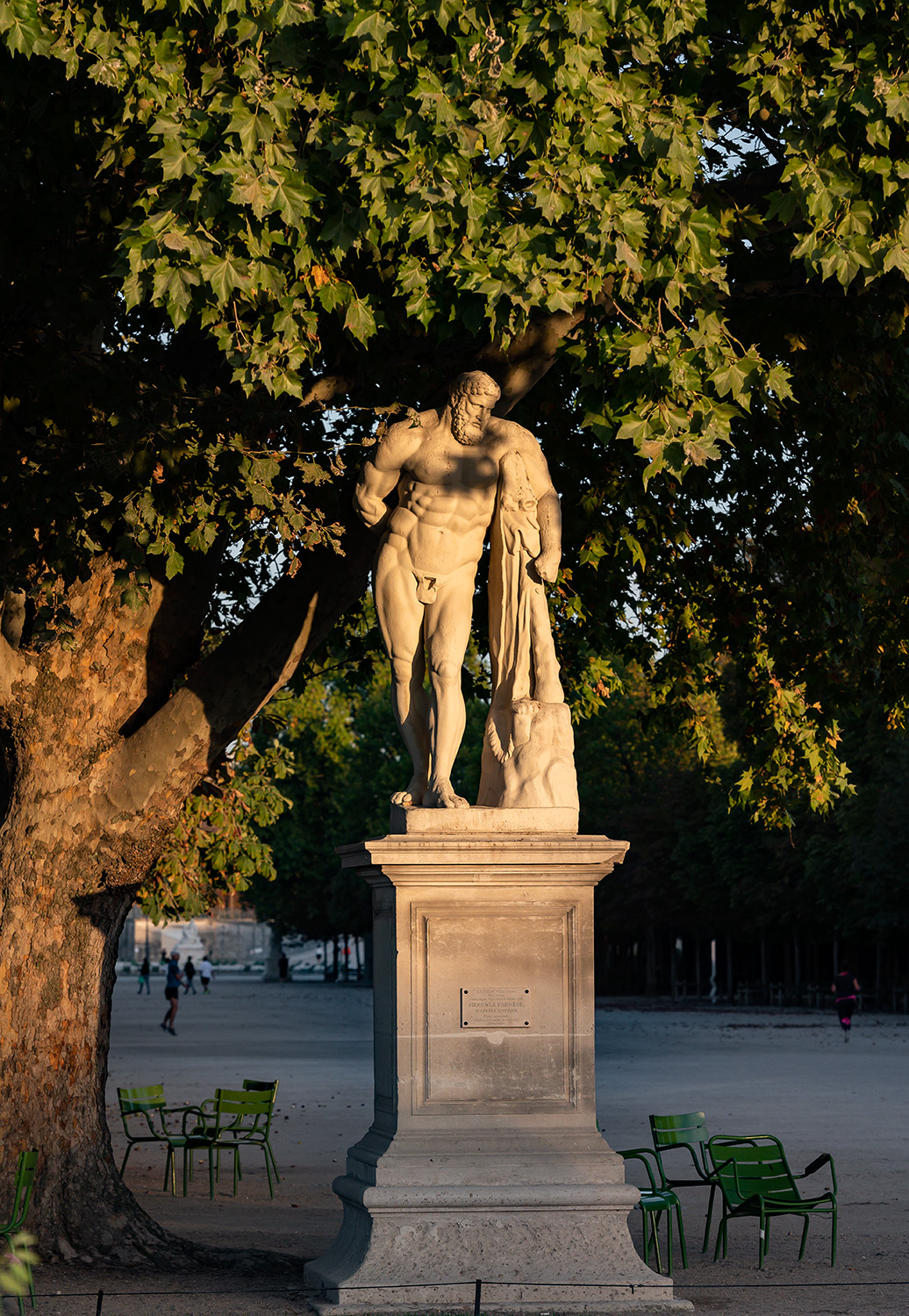 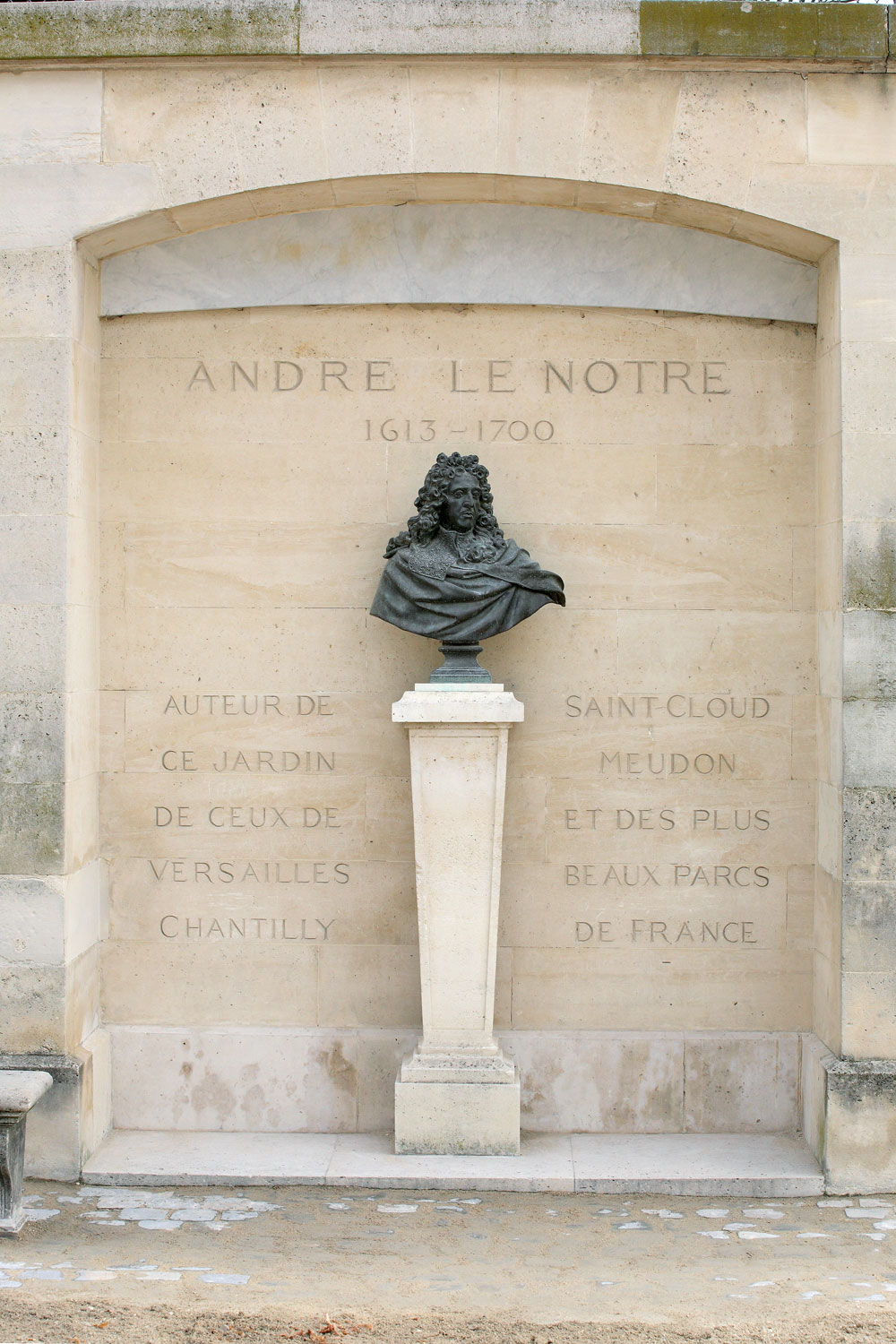 39 Comments on “Trip to the Louvre, and its gardens”