We found time before lunch at Le Cheval Blanc to fully explore the exterior of this dazzling building.

The history of La Samaritaine

The La Samaritaine department store is located in the first arrondissement, overlooking the Seine and close to many of Paris’ historic monuments. The company was started in 1870 by Ernest Cognacq and Marie-Louise Jaÿ (a former saleswoman at Le Bon Marché) as a small apparel shop. 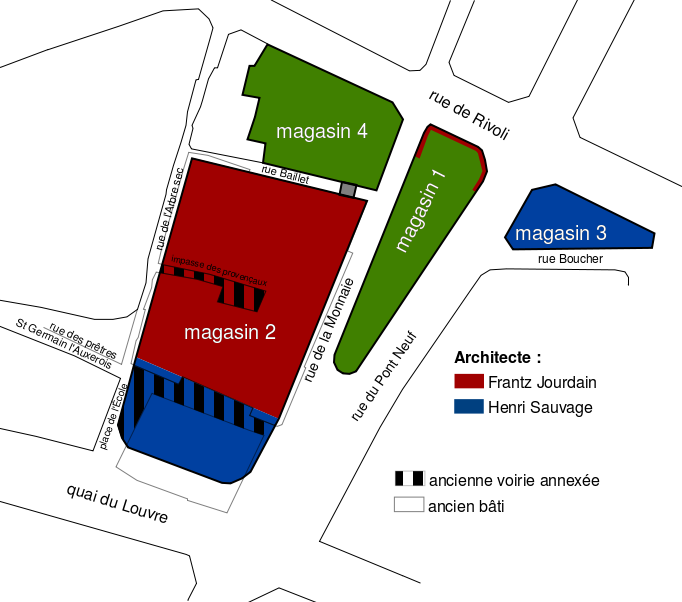 Architect Frantz Jourdain was originally hired to assist in the remodelling and expansion of the existing store building, known as Magasin 1. However, as the store’s success continued to grow, Cognacq decided to expand into a building across the street, Magasin 2, which became the site for La Samaritaine.

Jourdain’s membership of multiple societies heavily influenced his design choices for the Samaritaine. He was president of the Societe du Nouveau during the height of the Art Nouveau movement. The building’s original design heavily embodies the ideals of this artistic style.

While the skeletal structure of the department store is constructed of steel and glass, the building contains many adornments which lessen the harshness of its rigid structure. The building’s exterior has two domes made of glass brick that light up in the nighttime. The extended verticals of the domes, sectioned into eight sides, accentuate the height of the building and draw the viewer’s eye to the top of the store.

The facade of the building consists of ceramic panels in brightly coloured hues of yellow, white, green, and gold. The word “Samaritaine”, as well as some of the available merchandise and ware, are displayed around the facade of the building in colourful enamel using an elaborate lettering. Dispersed around these signs are naturalistic flower motifs, which continue to the interior design of the building as well. The interior features decorative iron staircases, glass tile floors and frescoes using the repeated floral motif.

Offering quality, affordable goods, the store proved hugely popular, thanks to innovations such as clearly marked prices and clothes customers could try on before buying. Its slogan “On trouve tout à la Samaritaine” (“One can find everything at Samaritaine”) won over the people’s hearts.

La Samaritaine was bought in 2001 by LVMH and, in order to fully update it, the store was closed in 2005. LVMH selected the Japanese architectural firm SANAA to renovate the building. There were plenty of planning hurdles to jump over so that the renovation process didn’t actually start until 2015 and was only completed mid-way through last year. 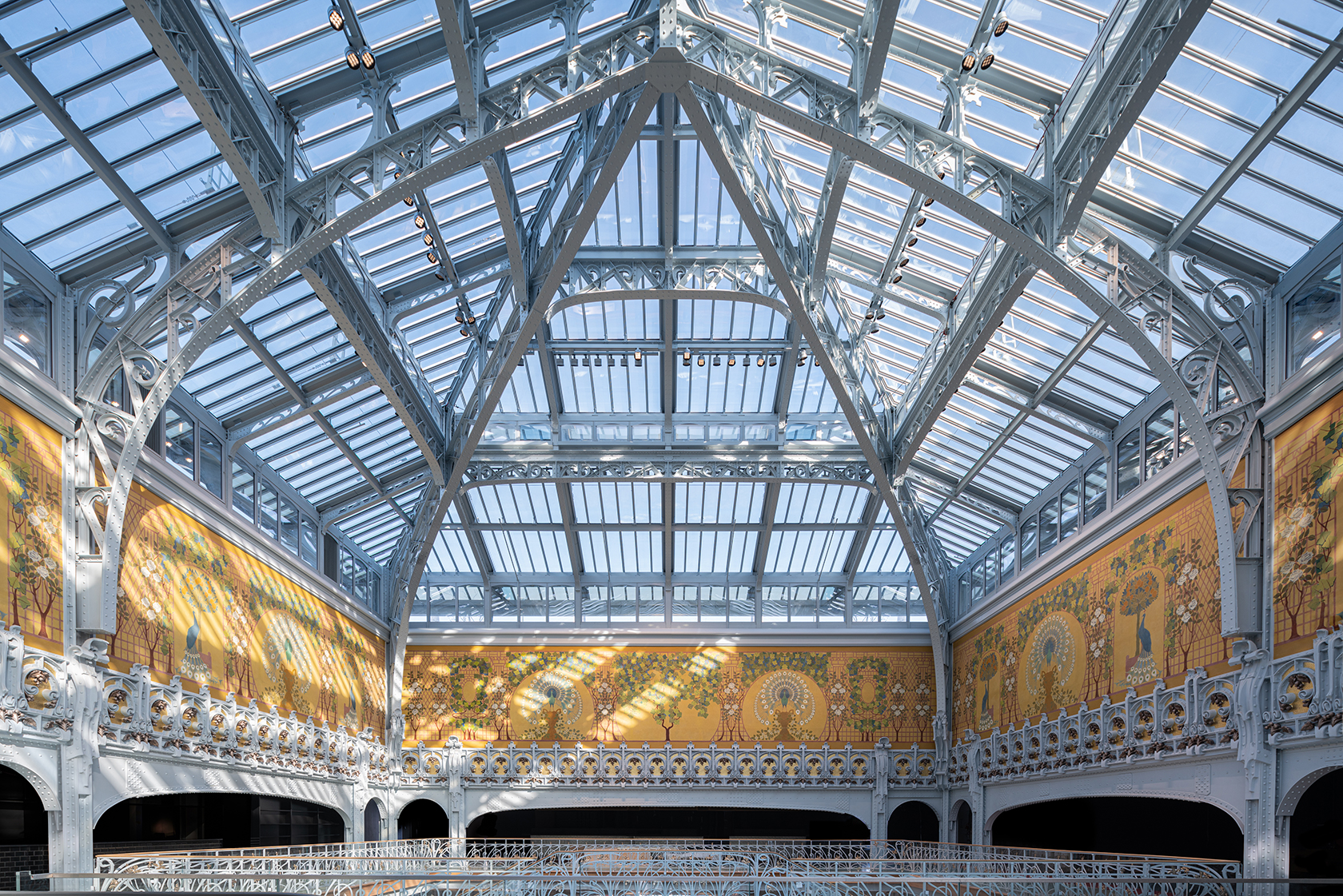 The stunning redesign which retains many of the building’s original decoration includes an undulating glass façade wrapped around part of the heritage buildings. Marrying past and present, restored Art Deco and Art Nouveau details shine alongside contemporary touches. 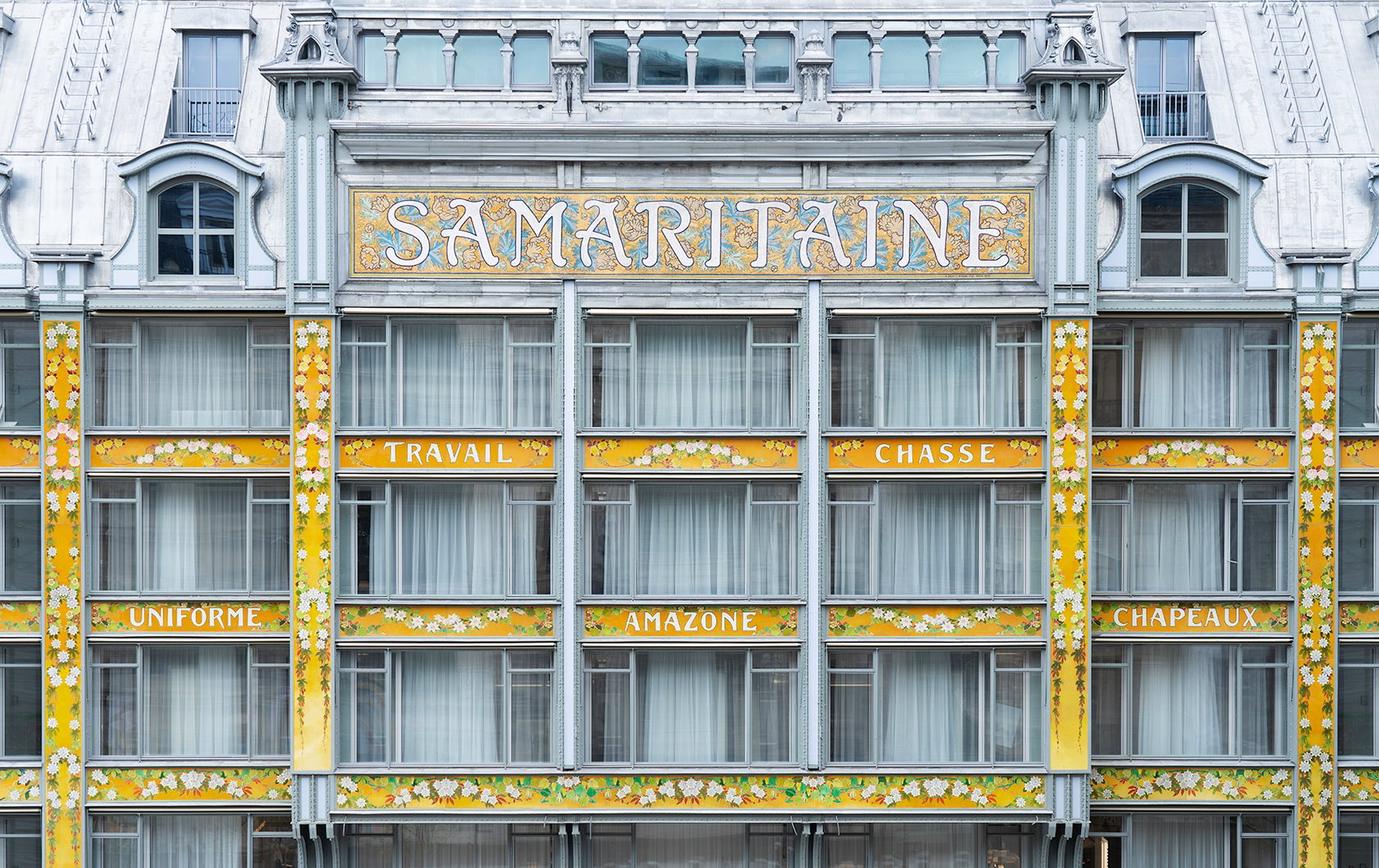 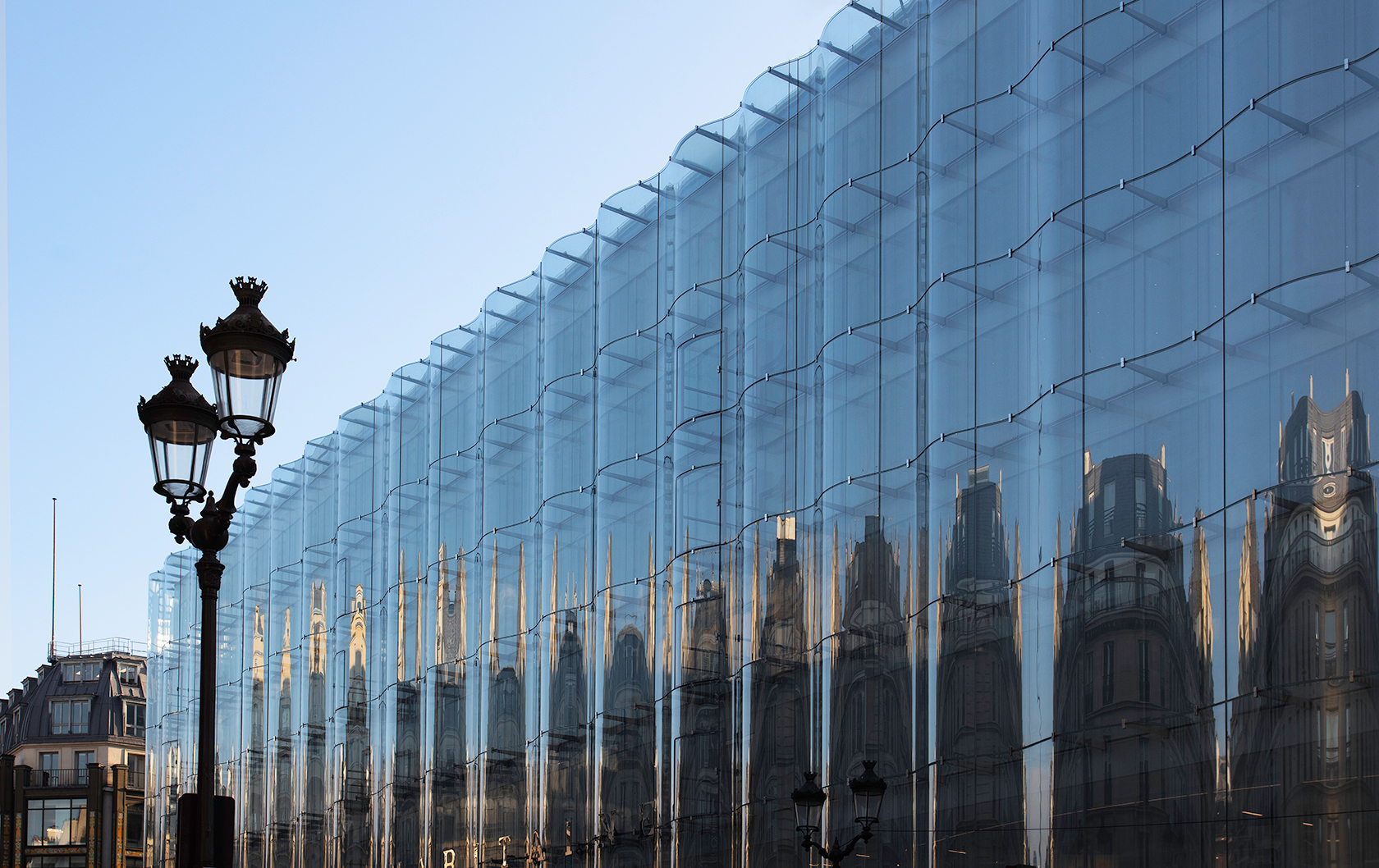 Architects SANAA united the eclectic complex, spanning Art Nouveau, Art Deco and contemporary buildings, connecting them with two airy, glass-domed courtyards. The site closest to the Seine is a historic monument and has been dazzlingly renovated. A highlight is its rectangular glass roof with an Eiffel-esque iron frame, designed by Frantz Jourdain in 1907, now shown off in style. It crowns a sublime atrium, crisscrossed with staircases and topped with a giant gold-hued peacock mural. Cast-iron signs, ornate pillars, ceramic decorations and enamel tiles were all painstakingly restored.

Numerous artisans worked on the project, from sculptors to painters, gilders and ironmongers. They crafted 16,000 gold leaves to restore the oak railing of the dramatic central stairway. For the wavy façade facing Rue de Rivoli, SANAA produced 343 screen-printed glass panels; this glistening curtain marks the entry to the revamped retail spaces, echoing the shape of neighboring Haussmann-era buildings. Alongside the chic department store there’s a smart hotel, while a new pedestrian plaza offers direct access to Pont Neuf opposite.