I’m continuing my series of posts about Villages Perchés (perched villages) because there are so many I’ve still to cover. Today’s village of Levens is another one of the sixteen villages grouped together by the Métropole Nice Côte d’Azur tourist department as the Route des Villages Perchés (Route of Perched Villages). The others are: Aspremont, Carros, Castagniers, Saint-Jeannet, Coaraze, Colomars, Duranus, Eze, Falicon, La Gaude, Lantosque, La Roquette-sur-Var, Saint-Blaise, Tourrette-Levens and Utelle. Many of these are places I cycle through, or past, on a regular basis.

Levens is a medieval village clinging to a rocky outcrop overlooking the Var and Vesubie river valleys. Located at an altitude of 600 metres, it lies in the centre of an area which stretches from the Var plain to the Férion mountain range at 1,400 metres high.

The town has a more interesting history than many. The area was inhabited before the Christian era by Lépontiens, one of the many Ligurian tribes. The town’s name Léponti became Leventi under the Romans, then Leventio in the Middle Ages, Levenzo during the Italian era and finally the current Levens.

The Romans set up shop in the Prés (meadow) quarter, one of the most beautiful in the area. In particular, they constructed a cobbled mule track going from Cimiez (Nice) to Saint-Martin-Lantosque which traversed Levens.

In 407 the Leventi were invaded by a Vandal horde who’d crossed over the Rhine with Alans and Sueves Vandals. They would subsequently cross into Spain in 409 and to North Africa in 429.

Like many perched villages, the current Levens is constructed around the old feudal castle which was erected by the counts of Provence after the collapse of the Roman Empire.

Towards the end 14th century, Levens was included in the County of Nice, which parted ways from Provence to form an alliance with the House of Savoy on the initiative of the powerful John All Saints’ Day, Baron of Beuil, whose eldest son later became Lord of Levens.

In January 1475, Louis Grimaldi, Lord of Levens and descendant of John, allowed the inhabitants a ‘liberty charter’, conferring on them the right to vote for their own councilmen, and getting rid of the annual “cut” (local tax) of 40 gold florins to be paid to Grimaldi on All Saints’ Day.

John II Grimaldi, inducted into the fiefdom of Levens in May 1543, took an oath of fealty to the Duke of Savoy Emmanuel Philibert, only to immediately betray him and fight with the Franco-Turkish troops during the siege of Nice. Convicted of treason, John II was condemned to banishment and seizure of his goods.

Consequently, in October 1550, the inhabitants of Leventio purchased the oil and flour mills directly from their Savoyard overlord for 1,200 gold Italian crowns. However, after a 14 year period of roaming and making amends, John II’s title deeds were restored to him in December 1557, provoking anger among the inhabitants and making the Grimaldi family rather unpopular for a while.

Annibal Grimaldi, Count of Beuil and governor of County of Nice, maintained political relations with his French neighbours and was in favour of giving the county to France. The Duke of Savoy Charles Emmanuel then revoked Annibal’s command and ordered him and his son André to follow the Duke to the Turin court. When instead they returned to their lands, Charles-Emmanuel considered them rebels.

Even though they were not supported by Louis XIII, the king of France who had just married his sister Christine to Charles-Emmanuel’s son Victor Amédée, Annibal Grimaldi and his son were convicted of lese-majesté, rebellion and perfidy, and were sentenced to death in absentia. The Count of Beuil shut himself up in his castle of Tourettes-Revest, which was immediately besieged by Savoyard troops. He was strangled to death on 9 January 1621.

At the time of these incidents between the overlord and his vassal, the Lord of Levens was César Grimaldi. The inhabitants still remembered the return of John II, and the youth were not quick to forget that the Count of Beuil had written an act forbidding any public festivities without permission of the lord. When hearing of Annibal’s end, César and his family fled to Cabris; the Levensans promptly sacked the castle, placed a boutàu (a stone for jumping over) and danced the farandole around and over it, screaming:

We jump over the Grimaldis’ belly!

The day after, the Duke of Savoy favourably accepted a letter from the Levensans, affirming their devotion to Savoy. In return, Charles-Emmanuel granted a charter of liberty to Levens which became self-ruling. On 16 October 1622, the order was given to destroy the battlements surrounding the castle. 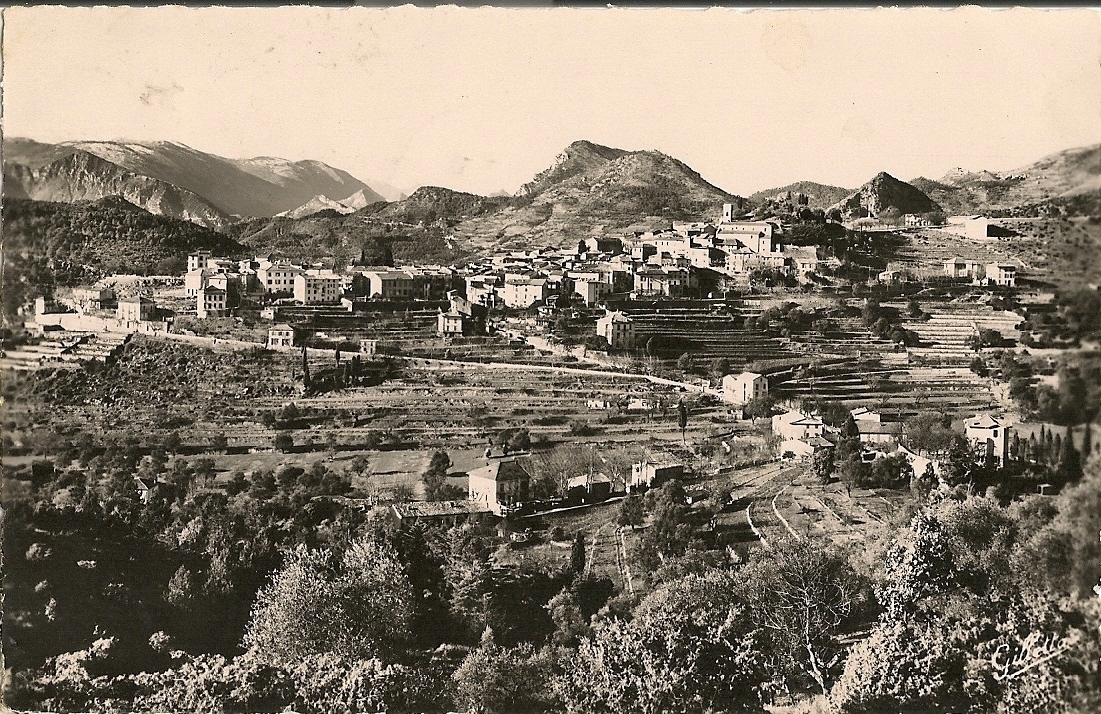 During the dark years of the Revolutionary period, Levens, along with the whole County [of Nice], suffered many acts of violence from the French occupying army and the counter-revolutionary movement. On 29 September 1792, General d’Anselme entered the city of Nice. and on 17 October 1792, the 1,150 soldiers commanded by Brigadier Paul de Barral seized Levens, then marched toward Duranus and Lantosque. The future Marshal of France, André Masséna, born in Nice and brought up in the Siga and Serret family houses in Levens, was part of this occupying troops. 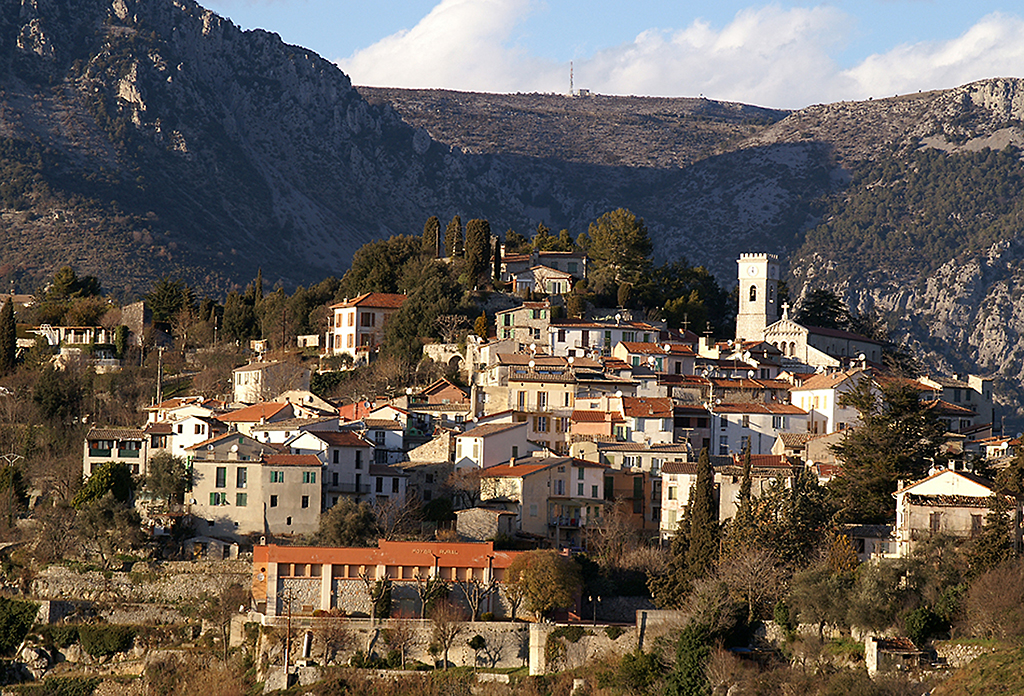 As in most of these villages, the streets and houses wind round a small hill as if they were looking to encircle it. Standing proudly at the top of the hill is the bell tower of St Anthonin’s church, with magnificent centuries-old Lebanese cedar trees in the background. 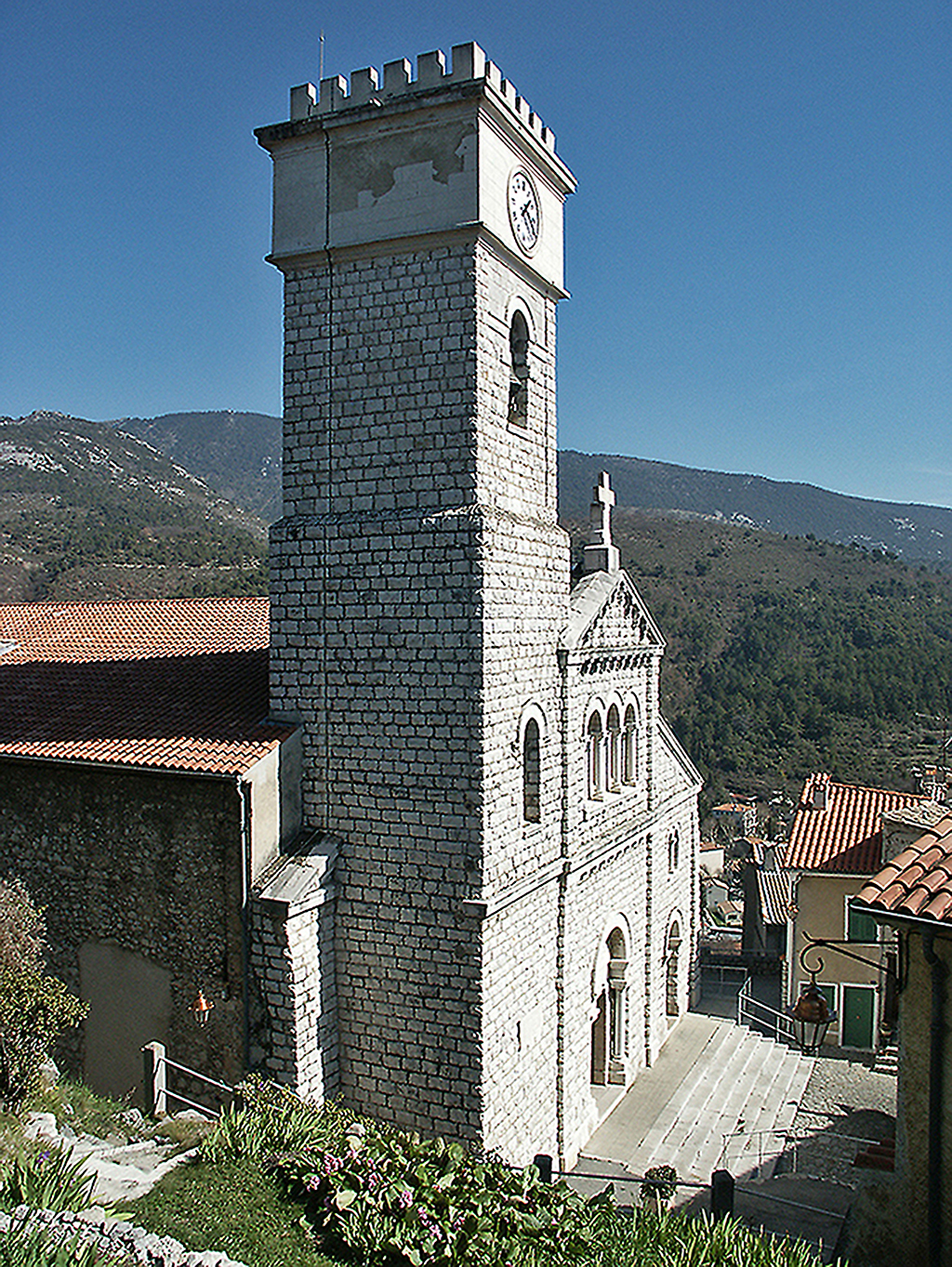 The Saint-Antonin parish church is mentioned as far back as 1286 on the Saint-Pons’ abbey register. Construction of the first church was probably prior to 13th century, but it has been subject to numerous revisions, particularly at the beginning of 17th century. It’s a Gothic church built as a basilica, with a four-bay nave and two side aisles which is worth popping in to see.

In addition, the village has four chapels: The White Penitents’, the Black Penitents’, Saint-Michel-du-Férion and Sainte-Pétronille. The Chapel for the White Penitents Brotherhood founded at the beginning of 14th century, was shifted and rebuilt in its present location (Republic Place) in 1775. While the Chapel for the Black Penitents Brotherhood was founded at the end of 16th century and now houses a religious art museum.

In the heart of the village, between Place de la République and Place de la Liberté, is Portal House, a beautiful 17th century mansion which takes its name from the gate against which it is built, part of the ramparts that once protected the old town and its castle. It was acquired by the town hall in 1971 and is now a cultural centre hosting both temporary and permanent exhibitions, including the sculptor Jean- Pierre Augier’s personal collection.

There are breathtaking views of the surrounding countryside from the village, particularly the one from Place Masséna, which encourages one to follow one of its many hiking trails, particularly those leading to the afore-mentioned  Grands Prés.

28 Comments on “Trip to Levens”