One from the Vaults: Spring is almost sprung

This one’s from way back in 2012 and sees me heading to watch the last day’s racing of one of the early cycling springtime events, The Tour du Haut Var. It’s a race I watch most years and has recently mushroomed from a two to three-day race and been taken over by the local newspaper Nice et Var Matin and renamed Tour Cycliste International du Var et des Alpes Maritimes which should ensure its continuation. This year’s race sees one of our friends taking over as the Course Director and we’re back from Dubai just in time to watch it.

I enjoy nothing more than watching live sport, particularly live cycling taking place on roads I too have ridden and know well. So, on Saturday, after despatching my beloved with friends to go cross-country skiing, I finished my chores, had a quick ride, leapt into Tom III and headed off down the motorway in the direction of La Croix Valmer, around the headland from St Tropez. The sun was shining, the sky was blue, the birds were singing, lambs were gamboling, the Mimosa was in bloom – surely, Spring was just around the corner? 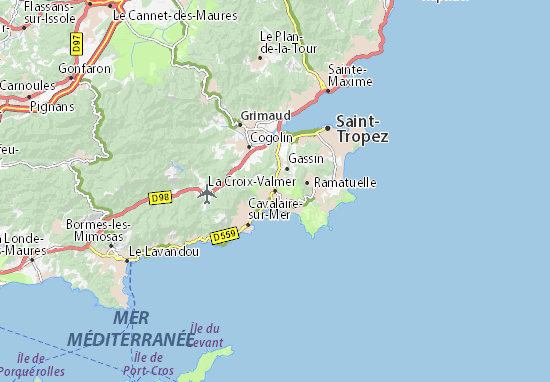 It’s a lovely drive but, as I neared the centre of town, there was a huge traffic jam caused by the (cycle) team buses trying to reverse into their allocated parking spaces. I noted there were plenty of parking spots on the opposite side of the road and asked one of the many policemen on traffic duty if I could park there. He confirmed I could and gallantly stopped the on-coming traffic so I could do a u-turn and park.

I left the car and headed in the general direction of the finish, first to have a close look at the run in and secondly to bag myself a spot on the finishing line. A couple of hours from the riders’ anticipated arrival time, there were few people milling around, mainly the organisers and press. I bumped into one of the journalists from the Nice Matin who often writes pieces about the cycle club and our events. I reminded him that it wasn’t too many months until the Kivilev (our local club sportive).

We chatted generally about cycling and who we thought might make an impact on this week end’s racing. As we walked the final stretch we eliminated a number of riders from the frame. The organisers were correct, this was one of the more testing parcours. My purpose today was two-fold, watch the racing and report via tweets wearing my VeloVoices’ hat. I was hoping to add some colour to the event by chatting to other fans  but the French are very guarded about the internet and what they see as an invasion of their privacy. They were happy to talk but didn’t want me to mention them on the net, as if it were some work of the devil. Luckily I did find a few who didn’t mind a mention but the crowd, which swelled considerably as time wore on, was largely local and retired.

Things started to crank up when Mr Cycling arrived: Daniel Mangeas. I have only to hear his mellifluous tones rattling off some obscure rider’s palmares to feel at peace. The race’s patron, and event’s first winner, Raymond Poulidor, was also there looking extremely spritely and a glowing advert for the health benefits of cycling.

Luckily for the riders, the weather is much improved on the last couple of weeks. Indeed, it was positively balmy. As the peloton approached the final five-loop circuit, the seven man breakaway had splintered into a 2-3-2 formation with the front two looking as if they might just manage to hang on, and they did. I just love it when a breakaway succeeds. Kinda restores one’s belief in the philosophy of having a go.

After the podium ceremony, I decided to head for home. As I approached my car, the same policeman advised me the road was still closed but that he’d let me know as soon as it was open. Not only did he let me know, he stood in the road and stopped the traffic, before ushering me out in front of two Cycling team vehicles who followed me back as far as the turn off to Draguignan.

All too soon I was home and my beloved, his face glowing from a day spent in the sun, was demanding to be fed. There’s no peace for the wicked, or me!

10 Comments on “One from the Vaults: Spring is almost sprung”