While I was in Dubai, fashion house Louis Vuitton presented SEE LV, an immersive journey covering over 160 years of the company’s history at the Dubai Mall Fountain. 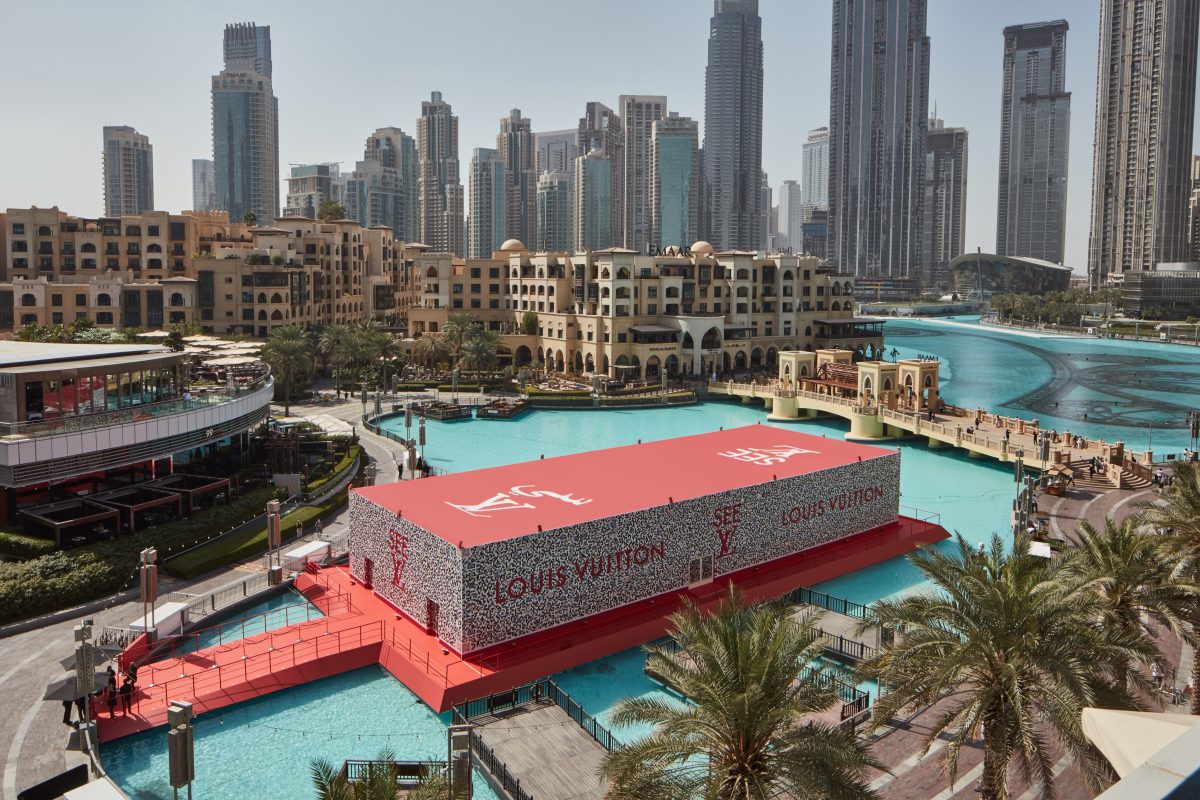 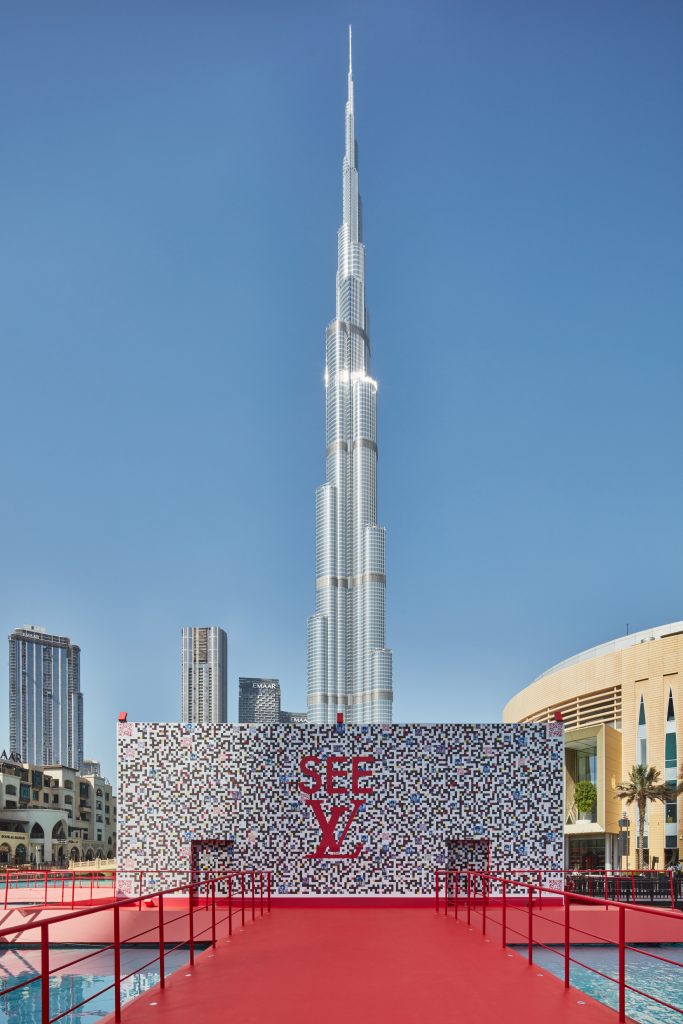 The exhibition space is suspended on the water next to the Dubai Fountain. This is the exhibition’s third stop, after its debut in Wuhan, China, in 2020 and then Hangzhou in 2021.

This exhibition allows you to delve deep into the universe of Louis Vuitton through immersive and digital experiences. It covers Louis Vuitton’s history and creations through a contemporary lens, bringing together a remarkable collection of modern and early 20th century shows, artistic collaborations and iconic leather creations.

In 1837, 16 year old Louis Vuitton arrived in Paris and worked as an apprentice for Monsieur Maréchal. Seventeen years later, Vuitton opened his own workshop at 4 Rue Neuve-des-Capucines near the Place Vendome, growing a family business to an empire in just over a century. The Maison is synonymous with elegance, yet has found a way to appeal to everyday consumers with a wide variety of goods, from bags to belts, to costume jewellery featuring its recognisable LV logo.

The LV line has been directed by many celebrated designers such as Marc Jacobs, Nicolas Ghesquière and the late Virgil Abloh, who was the artistic director of Louis Vuitton’s menswear collection from 2018.

What to see at See LV

Visitors are initially greeted by a portrait of a young Louis Vuitton, conceived by artist Refik Anadol using AI. Next comes a showcase of men’s and women’s ready-to-wear pieces, starting with a multi-hued straight-cut dress and square pillow high boots by Nicolas Ghesquiere for Louis Vuitton’s autumn/winter 2021 collection.

The piece was created in collaboration with renowned Italian design house Fornasetti and nods to Ghesquiere’s time travel aesthetic.

Inspired by the blankets used by moving companies to protect furniture, a textured silver suit in upcycled monogrammed  felt from the autumn/winter 2021 menswear collection is a fitting reminder of the late Virgil Abloh’s genius, as well as the maison’s efforts at sustainability.

One of the highlights of this section of the exhibition is a dress by Charles Frederick Worth, dating back to 1893, crafted from silk brocade trimmed with black lace flounces and ivory silk chiffon ruching. The dress is cut provocatively to show the ankles, and is presented alongside a historic LV travel trunk.

Worth is considered to be the founder of haute couture and worked closely with Louis Vuitton in one of the first collaborations in fashion history.

The clothing is flanked by a wall of Louis Vuitton’s most recognisable bags, from the Steamer and the Speedy to the Noe and Twist, set against a backdrop of pictures of the brand’s most famous fans. 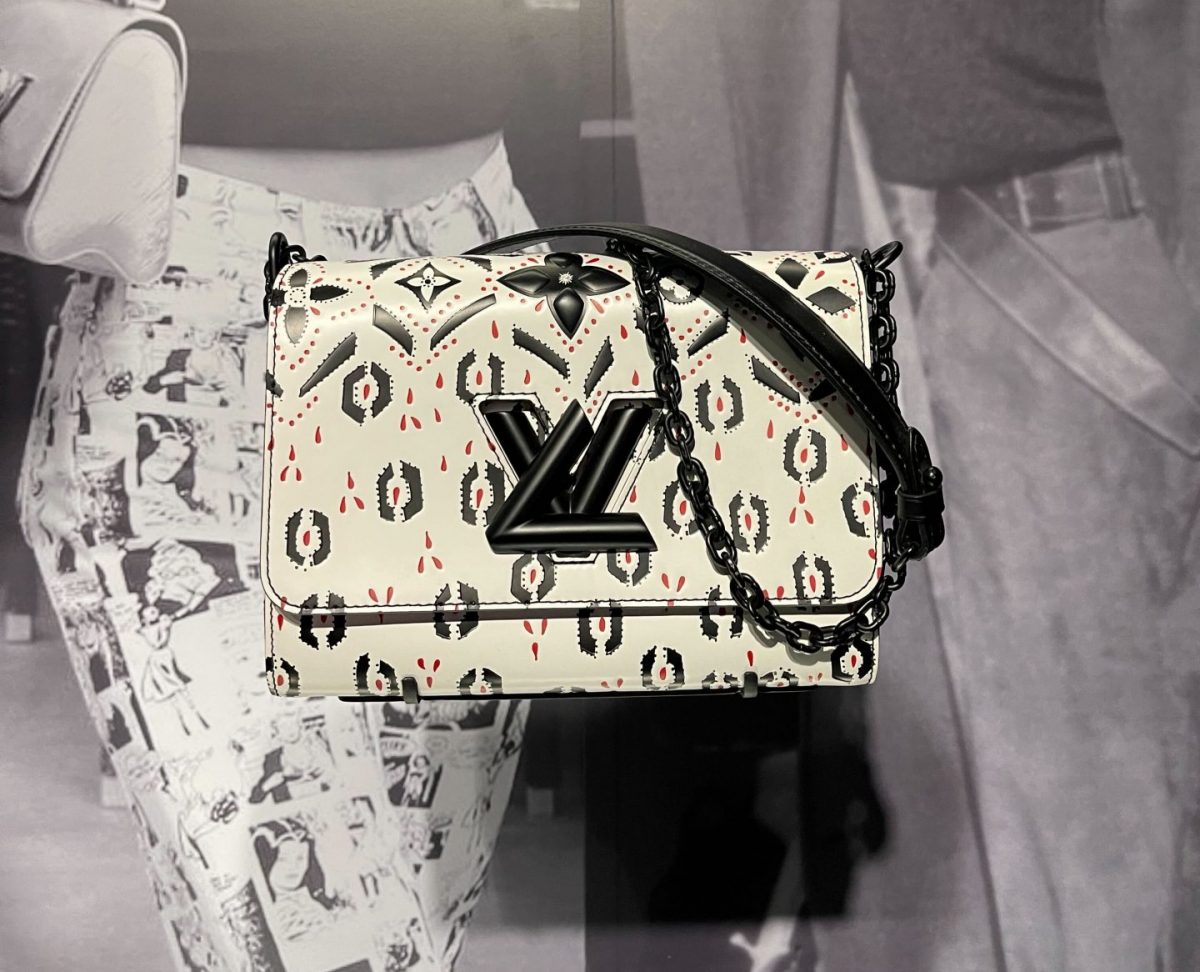 A separate room is dedicated to highlighting how Louis Vuitton has shaped the evolution of luggage, offering a snapshot of the maison’s contributions over the past one and a half centuries. It highlights how the brand’s accessories have played witness to all the major transport revolutions of our age – from steamer ships to skateboards, and automobiles to aviation.

There is Virgil Abloh’s Airplane bag from the autumn/winter 2021-22 collection and a transparent Keepall bag crafted from PVC, set alongside an Excelski trunk from 1923, cleverly designed by Georges Vuitton to be attached to a vehicle’s luggage rack.

A third section of the exhibition hones in on the now ubiquitous Monogram, invented in 1896 by Georges Vuitton and now one of the most recognisable motifs in the world. The patterning is emblazoned across an interactive screen that responds to the movements of the person standing in front of it.

Obviously, there’s one final stop where you can pick up a Louis Vuitton souvenir – a little something to take home now you’ve begun to fully appreciate the breadth, reach and influence of this historic French heritage brand.