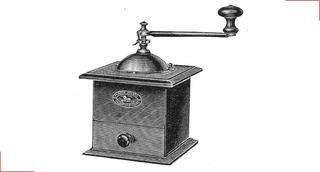 The Peugeot family of Valentigney, Montbéliard, in Franche-Comté began manufacturing saws in 1810 from its steel foundry, which quickly expanded into other hand tools and, circa 1840-1842, coffee grinders; then, in 1874, pepper grinders; and then, circa 1880, bicycles.

The company’s entry into the vehicle market was by means of crinoline dresses, which used steel rods, leading to umbrella frames, chisels, wire wheels, and bicycles. Armand Peugeot introduced his “Le Grand Bi” penny-farthing in 1882, along with a range of other bicycles.

The car and motorcycle company and the bicycle company parted ways in 1926, but the family-owned Cycles Peugeot continued to build bicycles throughout 20th century until the brand name was sold off to unrelated firms. The family-owned firm Peugeot Saveurs continues to make and market grinders and other kitchen and table-service equipment.

The Peugeot family, through the Établissements Peugeot Frères, is the majority shareholder of the Peugeot Saveurs group.

In 1725, Jean-Jacques Peugeot had a grain mill on the river Gland in Sous-Cratet, a hamlet dependent on Hérimoncourt. Jean-Pierre and Jean-Frédéric, his descendants, were given permission in 1812 to convert the family mill into a laminated steel factory where they produced fine steel strips and springs.

In 1812, the first Peugeot saws they began manufactured were awarded a first-class gold medal for their quality and price, a distinction awarded by the Société d’encouragement pour l’industrie nationale.

In 1818, a first patent application opened the era of tool manufacturing, and in particular saw manufacturing: the patent covers the cold rolling, hot rolling, annealing, straightening, and flattening of saw blades.

The first coffee grinder, the Model R, made of wood and sheet metal and available in 10 different sizes, was created in 1840. Until 1870, it was unimaginatively called the “Ordinary Model”.

In 1850, the Lion symbol appeared on the saw blades. It was intended to symbolise the qualities of Peugeot tools: strength of the teeth, flexibility of the blades, speed of cutting. The first cast iron mills were produced in 1855. They were also called the counter or grocery mills and were used to grind large quantities of various grains: coffee, sugar, oats etc etc

Released in 1874 and still in production, the Model Z is the first Peugeot table pepper mill model. Initially made of plain white porcelain, it was later made of silver-plated metal, bakelite, and wood, and was sometimes equipped with a crank. In 1889, the Beaulieu plant manufactured 50,000 lawnmowers, 530,000 saws, 600 tons of rolled steel, 540,000 watch springs, 600,000 plane irons, 24 tons of springs and bodices for corsets and 450,000 coffee grinders.

Created in 1956, the Auberge model mill made of turned beechwood and resembling a chess pawn is still part of the Peugeot collection today.

In 1992 Jean-Claude Fornage managed a factory for the Stanley company in Besançon. Among other things, this company manufactured the mechanisms for pepper and salt mills. He then redeployed this activity and revived the Peugeot mills. The new company was named PSP, which stands for “Poivrières Salières Production”. (At that time, 27% of PSP’s capital was held by the Peugeot family holding company).

In 1996, the milestone of one million mills sold per year worldwide was passed.

In 2007, PSP diversified with the purchase of the company l’Esprit et le Vin (corkscrews and carafes), which in 2014, represented 20% of PSP’s business sold through tableware stores and wine shops.

The relaunch of the hand tool business in 2007 led the company into receivership in December 2012. Stripped of this branch, the company relaunched, and a capital raise for  Établissements Peugeot Frères (EPF, one of the two main holding companies held by the Peugeot family) took place in April of the same year. Jean-Claude Fornage became a minority shareholder with 17% instead of 70%, with Thierry Mabille de Poncheville, Chief Operating Officer of EPF, replacing him at the head of the Board of Directors.The company’s exit from the receivership situation was pronounced by the Besançon Commercial Court in June 2014.

In 2010, to celebrate its 200 years, Peugeot revisited its “Classics” through the creation of the 1810 Limited Edition Collection: 4 iconic models (Bistro, Tahiti, Paris and Fiji). Each one is representative of an era and comes in one of 4 delicious and ultra-contemporary colours: Slate, Raspberry, Lime and Fig. The anniversary was also the perfect opportunity to hold competitions, ”Share your favourite mill story” and “Expose your mill”. Each offered lovers of the brand the opportunity to bring their fondest memories of the Peugeot mill to life through words or pictures.

A new identity, a new signature, new uses, innovations and designs – the Peugeot lion is still hungry for new challenges and is now actively committed to exploring other areas where flavours reign supreme and creating new instruments of taste to help foodies satisfy all their prepping and cooking needs, whether cutting, slicing or grating……….

Since February 2020, Sébastien Zott formerly of Le Creuset and Brita, has headed the company overseeing the modernisation of its production, expansion of its distribution and diversification of its offerings. With just under 200 employees, the company’s turnover exceeded 33 million euros in 2020 and is projected to exceed 100 million euros before 2030.

The wood used for Peugeot’s mills is sourced from PEFC™-certified European forests. Each mill is assembled in France at its site in Franche-Comté. To protect environment, post manufacturing wastewood (chips and sawdust) is collected and recycled. Solvent-free paintings have been chosen for the coloured finishes as part of the company’s continuous improvement policy. Peugeot also has a strong social dimension by contracting suppliers which mainly employ the handicapped or those in need of reintegration.

Peugeot has officially been awarded the prestigious EPV label in recognition of its manufacturing excellence.This state-issued accolade pays tribute to French companies that have achieved the highest levels of traditional and industrial expertise.

« Peugeot, with a sense of pride in its history and legacy, is established in time and in the collective imagination. It is a symbol of our family’s commitment to a territory and our connection to the values of expertise, innovation and style. Always aiming at the future, Peugeot boots even further its development in order to better support chefs, families and epicureans from the kitchen to the table. »
Jean-Philippe Peugeot

Why we love them: When we think peppermill, we think Peugeot. Nothing compares to its classic, curvaceous design—and whether we want a coarse covering or a fine dusting of pepper, Peugeot nails it every time. They’ve added tons of modern designs and finishes to their canon—a particular favourite is the sleek brushed stainless steel pair.