The self-proclaimed eighth wonder of the world, Palm Jumeirah is the largest man-made island on the planet. Set on the coast of the Arabian Sea, in the dynamic city of Dubai, it is an eye-catching landmark. Launched in 2001 following the vision of His Highness Sheikh Mohammed bin Rashid Al Maktoum. It spreads over an area of 560 hectares and divided into three main areas; The Crescent, Trunk and Fronds.This area is home to a collection of luxury villas, townhouses, apartments and hotels, plus an assortment of gourmet restaurants, chic cafes, adventurous entertainment facilities that serve both the faint of heart and the adrenaline junkies. 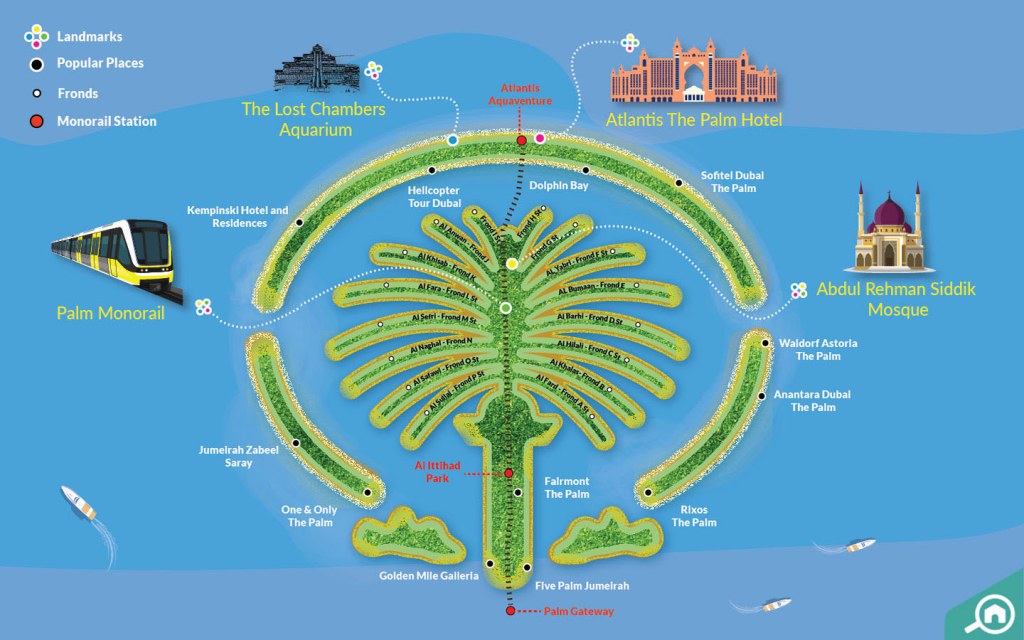 The Palm was created using land reclaimed from the Persian Gulf. It is part of a larger series of developments called the Palm Islands, including Palm Jebel Ali and Palm Deira, which together increases Dubai’s shoreline by a total of 520 kilometres (320 miles).

How the Palm was built

Prior to starting construction in 2001, divers surveyed the seabed and workers constructed a crescent-shaped breakwater from blasted mountain rock. The Palm’s Crescent stands a little more than 4 metres (13 feet) above low tide sea level and sits in 10 metres (34 feet) of water at its deepest point. 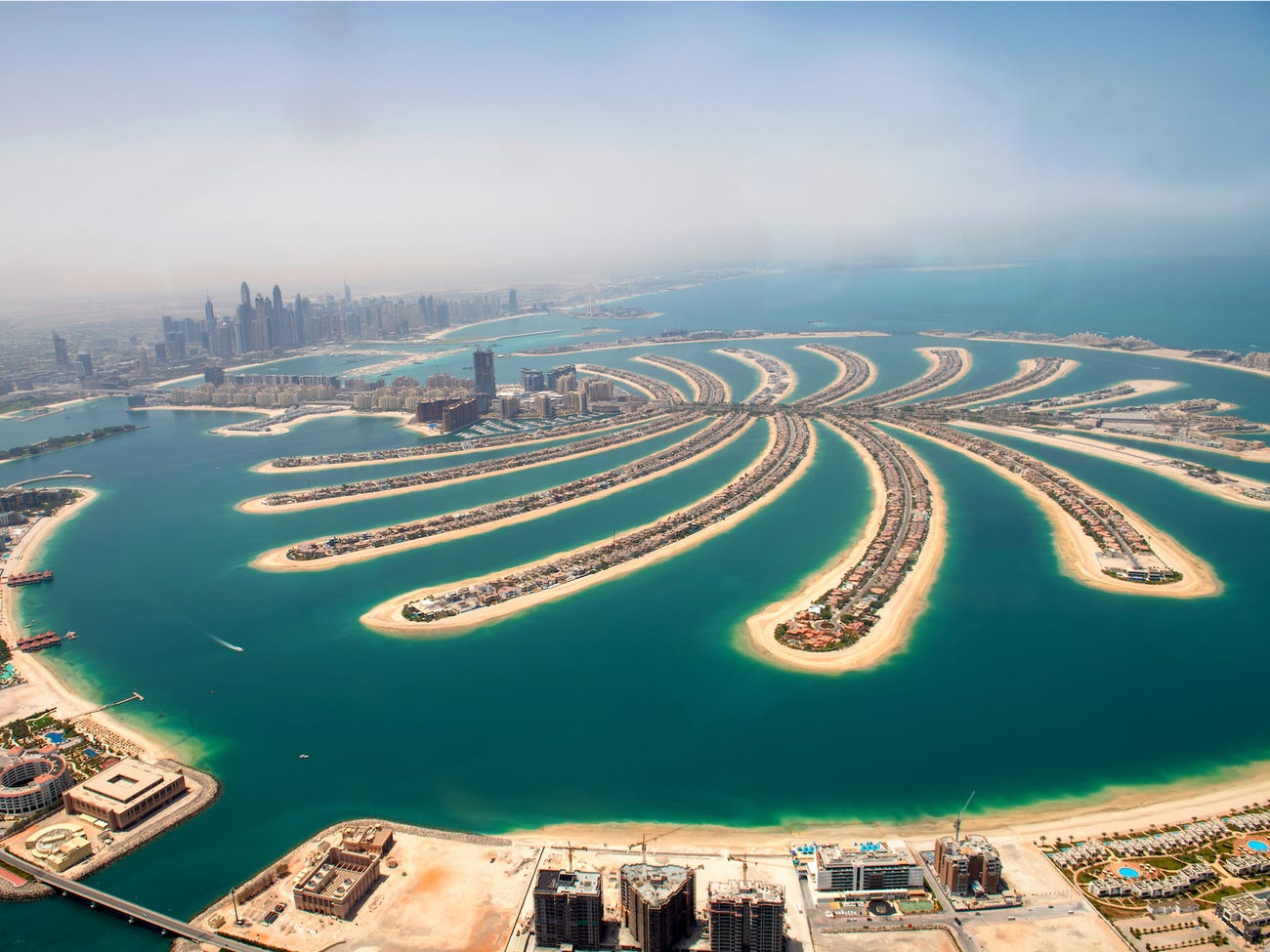 Sand, covered by an erosion-preventing, water-permeable geo-textile, makes up the breakwater’s lowest layer. Rocks weighing 0.9 metric ton (1 ton) cover the sand, and two layers of large rocks weighing up to 5.4 metric tons (6 tons) each cap the structure. A “toe” placed by a floating crane sits inside the Crescent. The breakwater also has two 100 metre (328 feet) openings on each side to eliminate stagnation in the 16 narrow, deep channels. These gaps allow water to completely circulate every 13 days.

The Palm Islands themselves are constructed from sand dredged from the sea floor and brought over from the Persian Gulf. Palm Jumeirah is made from ocean sand vibro-compacted into place. Vibro-compaction increases the density of loose sand by saturating it with jets of water and vibrating it with probes. (Desert sand tends to liquify when water is added so it could not be used for this project.) To get the complex shape just right, designers and contractors used GPS satellites to ensure the accuracy of the where the sand was sprayed to create the palm tree shape.

It is undeniably a monumental feat of engineering and modern technology.

Construction workers lived on the “fronds” and in anchored cruise ships while building the island. Designers at Nakheel maintain that villas barely 3 metres (10 feet) above sea level would be safe from the rising seas as a result of global warming. Some sources have claimed that the islands are sinking into the sea, which Nakheel denies. Some environmentalists also have claimed that construction of the islands harmed the area’s marine environment. They criticized the development, saying that rocks and sand buried oyster beds and coral reefs, and altered currents eroded the mainland shore.

To facilitate tourism and make life easier for residents, a six-lane sub-sea tunnel connects Palm Jumeirah to the mainland. Workers used a dam to drain the area and excavate the seabed before rereleasing the water. A monorail that runs the length of the palm opened in 2009 and is the only public transportation option on the island.

New resorts are still opening on Palm Jumeirah and developers are financing and building luxury apartments. An observation deck on the 52nd floor of The Palm Tower, allows you to see the entire island from up high.

My photos were taken from the window of the metro and from the beach at one of the many Jumeirah hotels. It’s a little too remote for us but can understand the attraction particularly for the family market.