One from the Vaults: Postcard from Chicago 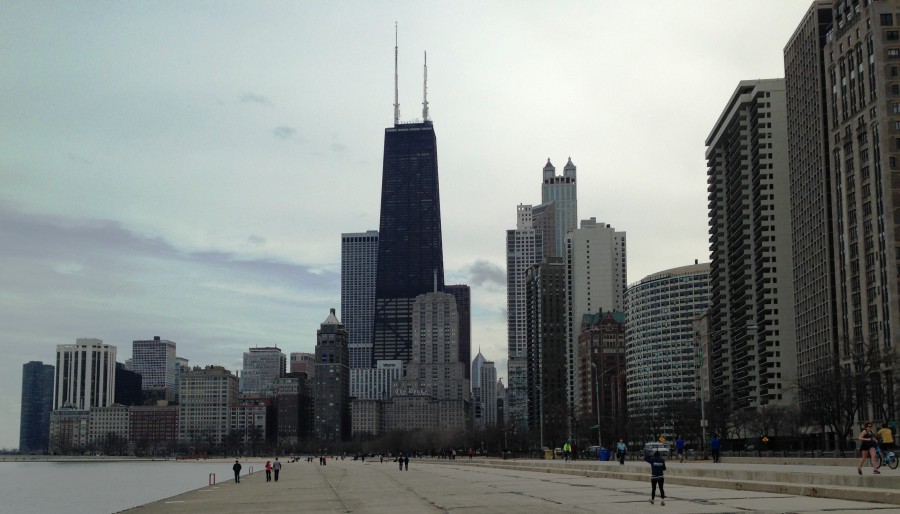 I sadly haven’t visited Chicago since 2016. So here’s yet another trip down memory lane.

I’ve recently returned from the Windy City, my first visit there since February 2007. You’re probably thinking, hmm not the best time to visit Chicago. I agree, but I was with my beloved who was attending a Dental Congress while I played hooky at a number of art and architectural museums.

I love the architectural melange in Chicago, not as built up as New York, with plenty of old buildings in the centre interspersed with skyscrapers. It’s a town you can “see” in a week-end providing, like me, you’re prepared to pound its pavements – or should that be sidewalks?

The Chicago skyline owes much to Daniel Burnham, architect of the Flatiron building – one of my faves – in New York, who sought to create Paris on the Prairie in Chicago, and Mies van der Rohe whose buildings are all over Chicago, if you know where to look.

My first port of call was a bookshop. I knew I had plenty of room in my suitcase for at least three more books. I’m rapidly building my collection of vegan cookery books. After my breakfast of avocado on toast at a nearby restaurant, I spent much of the morning in the bookshop before heading up the Magnificent Mile to The Art Institute of Chicago. I visited The Chicago Architecture Foundation and the Museum of Contemporary Art on subsequent days.

My beloved was busy with meetings all day long but free in the evenings leaving us to explore Chicago’s excellent restaurant scene on our own. Lest I get homesick, we stayed at the Sofitel, where I got a great deal on booking.com. Over the years we’ve stayed in a variety of hotels in Chicago but the advantage of working for yourself means you get to pick where you stay.

We’ve eaten at a number of Chicago’s long-standing restaurants such as Morton’s – where I once tussled with and defeated a 3lb lobster – and more upscale establishments such as Alinea and Charlie Trotter’s, the latter sadly closed after the chef’s demise. There are plenty of fish and Mexican restaurants where I could feed my love of shellfish and spices – just hold the butter, mayo, sour cream and cheese!

We arrived in a snowstorm but thereafter the weather was unseasonably mild. I still recall my first trip to Chicago, back in the early 90s. It was so cold I felt as if my sinuses were freezing. At times, the cold wind whips off Lake Michigan making it feel so much colder than the numbers on the mercury. Even so, on that trip I spent a very pleasant Sunday in Oak Park, exploring historic homes, including those of Frank Lloyd Wright.

I also found time to feed my beloved’s new found addiction to Lululemon sportswear, adding to the collection we started for him in Australia. That man has so much sportswear – swimming, golf, windsurfing, tennis, cycling, gym – he could open his own sport shop!

I’m not normally much of a shopper. Twice a season, I’ll go through my wardrobe, toss out the overworn, unworn and unloved and make a list – what else? – of what needs replacing. I’ll then go out and buy them, preferably in one fell swoop.

I have been searching for a new pair of jeans for some time. My problem in France is that they love the extra skinny legs which don’t fit my arms, let alone my legs. I favour what they call the “boyfriend” style but don’t want them pre-ripped, overlong or over wide. I tend to find the US, where I’m miraculously two sizes smaller than in France, and Germany, fertile hunting ground, though I had struck out last year in New York.

In Chicago, I chanced upon a pair which fit perfectly and indeed a few pairs of other trousers which also fitted the bill. Add in a couple of jackets and tops and that was my summer wardrobe sorted in a couple of hours – perfect!

33 Comments on “One from the Vaults: Postcard from Chicago”