Today I’m looking into the provenance of a local(ish) sweet treat, one that I often gift to clients and overseas visitors.

Who or what is the icon of Aix-en-Provence? Paul Cézanne, perhaps! The post-Impressionist painter certainly made this sun-kissed city, dominated by the Mount Sainte Victoire, his home and his muse. But from behind the honey-hued facades and pale blue shutters comes a diamond-shaped sweet, small in size but huge in taste and tradition, that proudly challenges the artist.

Made from syrupy candied melon and ground almonds and finished with a layer of immaculate icing, the calisson d’Aix is as delicate as almond blossom. It’s so well regarded in Provence that it’s part of their traditional Christmas table, where it sits among nougats, dried fruits and the orange blossom infused pompe à l’huile. Registered at the Patrimoine de la Ville d’Aix-en-Provence, it really is an icon of Provençal and French gastronomy. 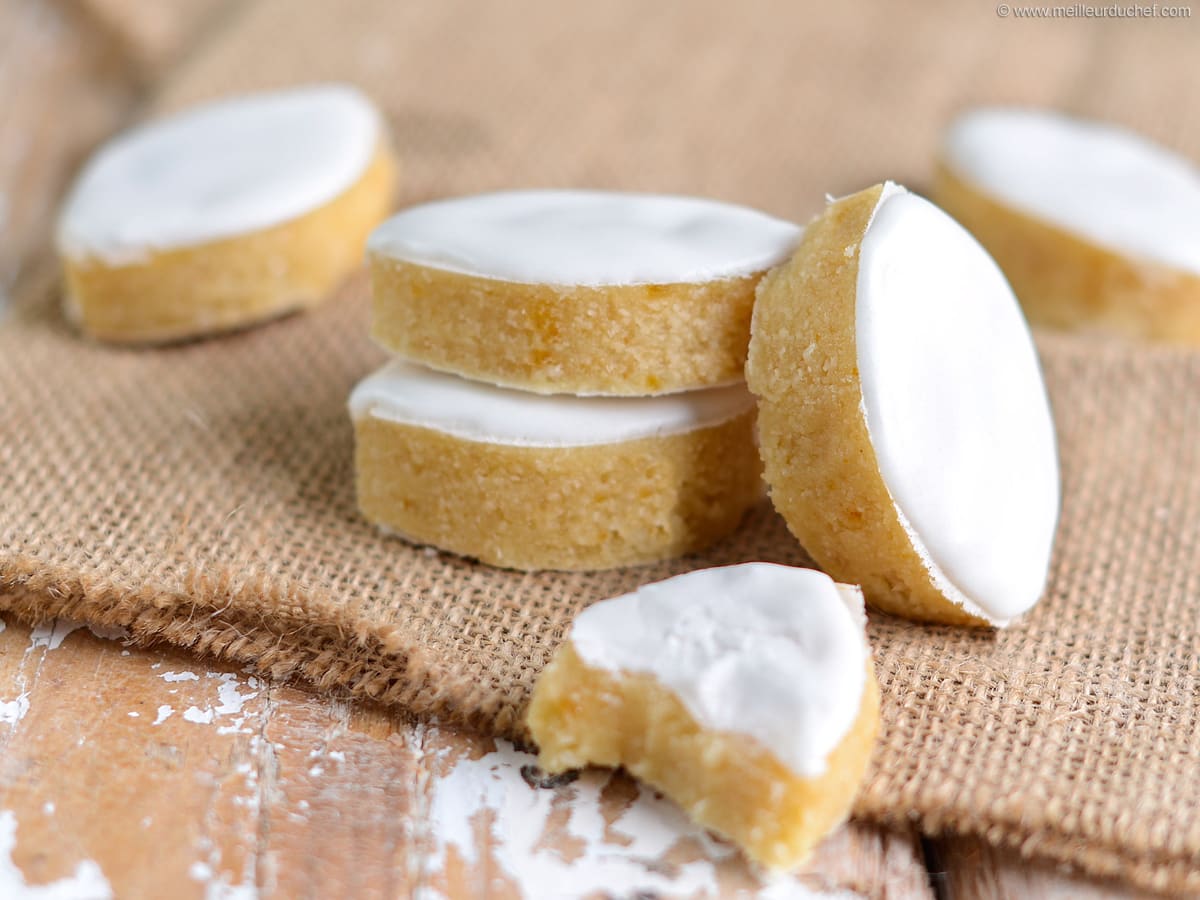 The legends that surround the calisson d’Aix are as delicious as the sweet itself. Some date back to Ancient Rome or Greece when dried fruit was combined with almonds to make calisone or kalitsounia. The most exciting tales, however, have a distinctively Provençal accent!

Firstly, back in 1454, to the alliance of Roi René, Duc d’Anjou and Comte de Provence, to the beautiful but famously austere Jeanne de Laval. For this special occasion, a local confectioner, perhaps even the King’s own, might have created a confection so regal that the new queen, bringing it to her lips, would have finally smiled and exclaimed in Provençal language, “Di calin soun!” (They are like hugs!) This would eventually become “calisson”.

In other versions of the story, a courtesan is said to have exclaimed these words or maybe the Roi René himself. Nevertheless, whoever made this declaration was right: calissons are like hugs! Perhaps therefore, the diamond shape is in fact a smile, the smile of Queen Jeanne.

In 1630, the plague was making its ravaging way through the South of France. Joseph Martelly, a county assessor, pleaded to the Vierge de la Seds, patron-saint of Aix-en-Provence, to protect the people of her city and vowed to distribute to them some calissons. When the epidemic ended, the assessor honoured his vow. [I wonder if this would work for Covid? Worth a try surely?]

At the start of every September, almond treats blessed by the archbishop would be distributed to the congregation in place of communion wafers. The priest would beckon them to the chalice that carried the goods by calling, “Venite ad calicem”, to which worshippers would playfully reply, “Venes toutei per lei calissoum” (Let everyone come to the calissons!)

These lovely stories may shroud us in the warm glow of folklore, but the proof of the calisson’s iconic status is indeed in the pudding, in its unique recipe. 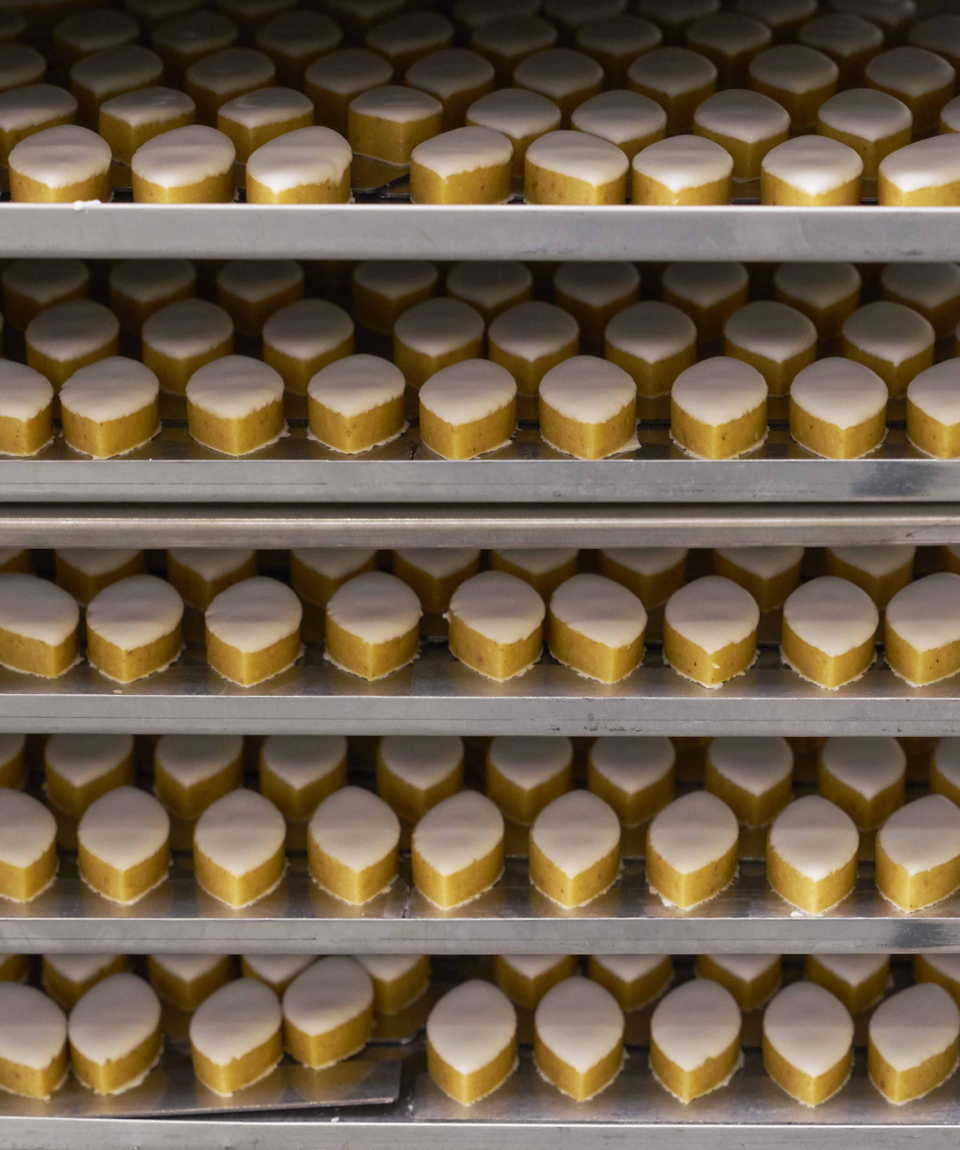 Provençal novelist and film director Marcel Pagnol apparently wrote that to make a calisson, one needs a third of almonds, a third of fruits confits, a third of sugar and a third of loving savoir-faire. No, I haven’t forgotten my maths. The artisanal method used by the confectioner is one of the key ingredients and one passed down from generation to generation, often for over a century. 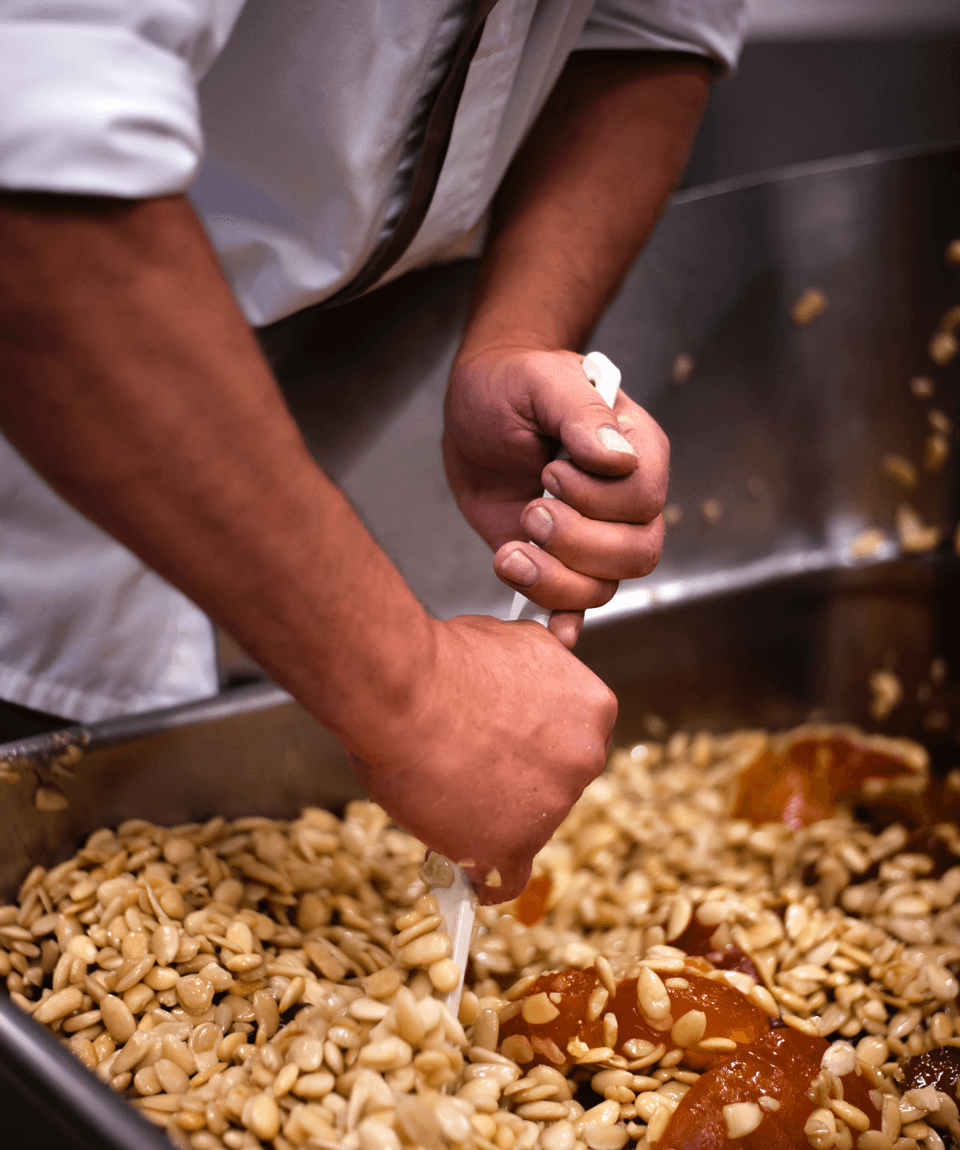 Almonds exclusively from Provence or the Mediterranean basin are blanched and ground, then combined with candied melon grown under the warm Provençal sun and a small amount of other candied fruits. The marzipan-like mixture is then lightly pressed onto a translucent wafer sheet and topped with a smooth layer of glace royale (egg white and icing sugar ). Although following the same basic steps, each of the dozen calissonniers (calisson-maker) of Aix-en-Provence will add their own secret ingredients, such as orange, orange zest or natural extracts of bitter almond or vanilla. 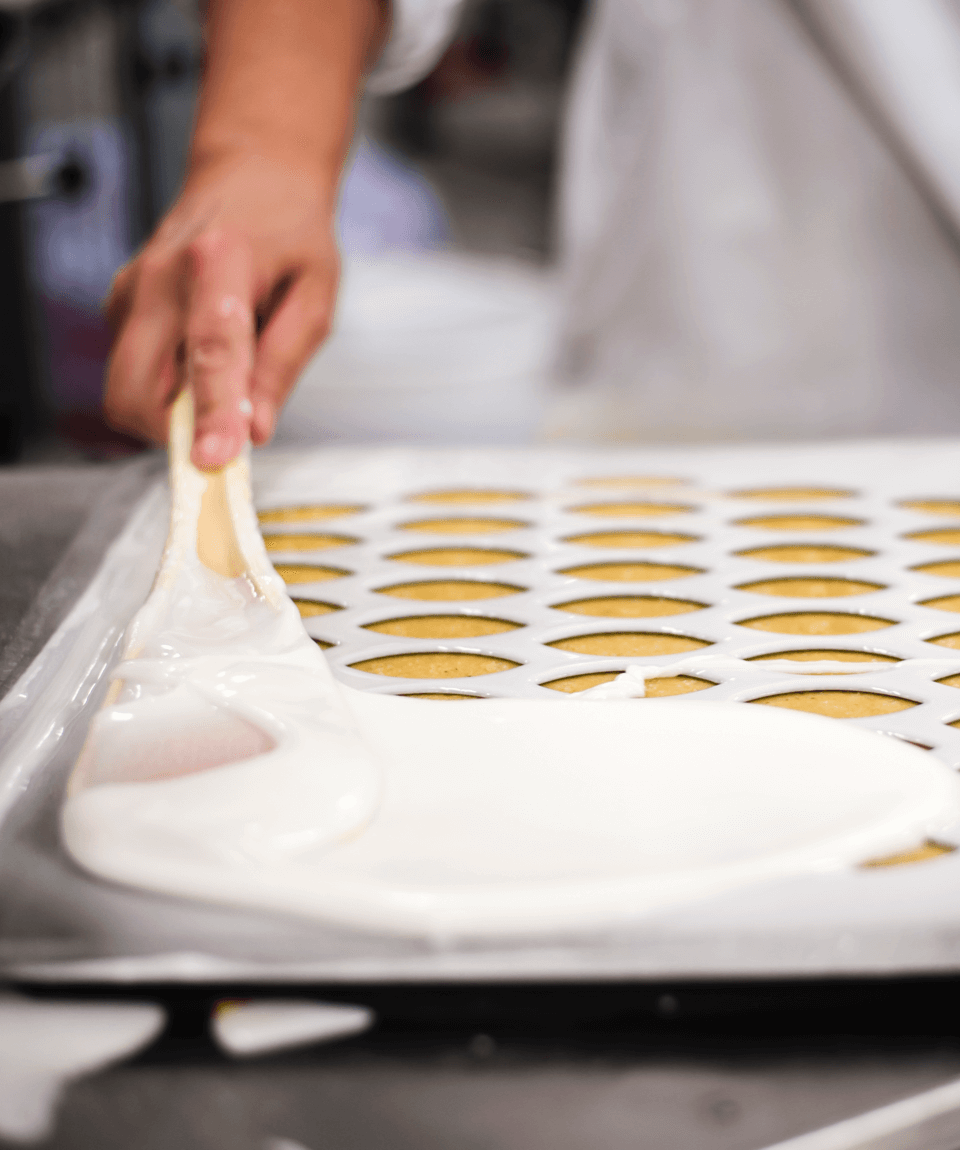 This traditional calisson is the pride of Provence and its specifications have been recorded by the Union des Fabricants de Calissons d’Aix (Union of Makers of Calissons d’Aix) to obtain an Indication Géographique Protégée, protecting its name and guaranteeing its quality. 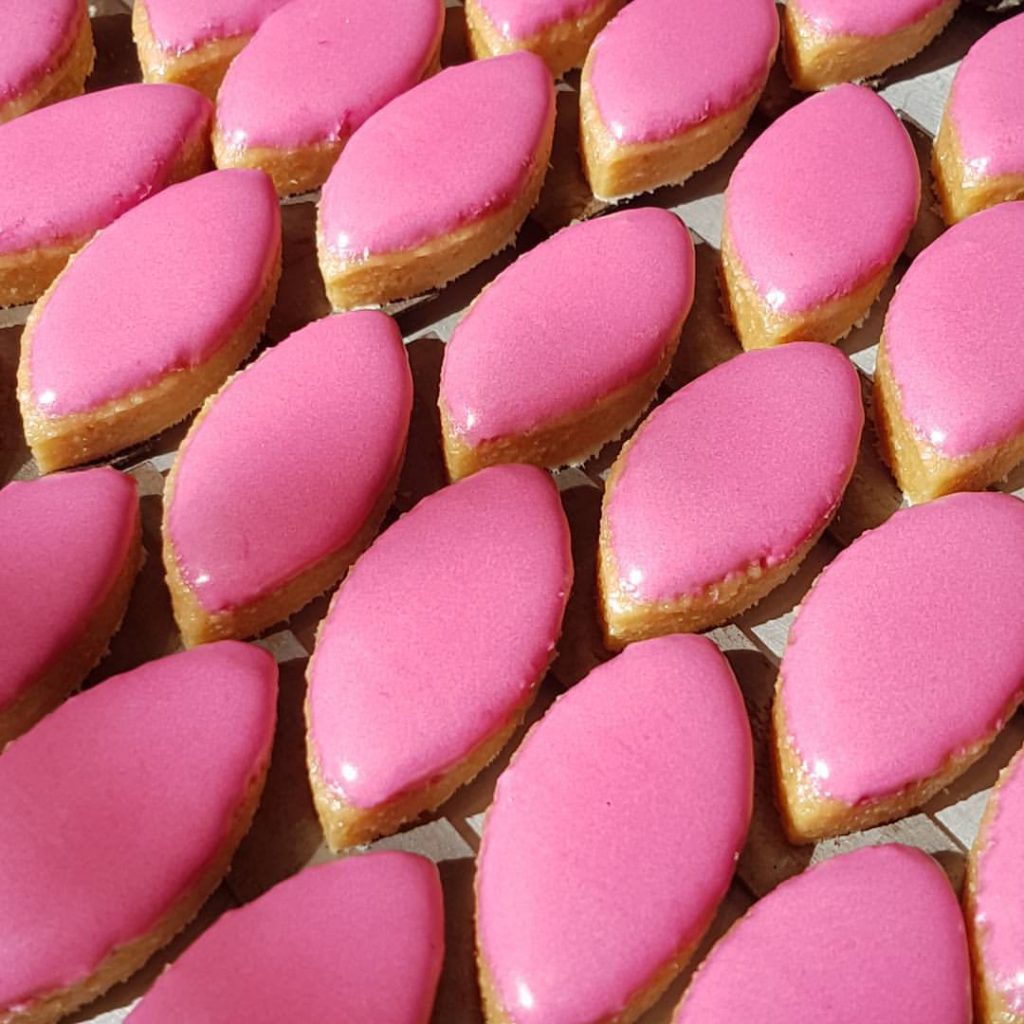 In recent years, confectioners have also let their imagination wander the orchards and fragrant fields of Provence in search of new flavours. Apricot, raspberry and cherry have found their way to the dessert table in the form of fruity calissons as have other typically Provencal flavours such as lavender, basil or figs. The Confiserie d’Entrecasteaux even reached out to neighbouring Marseilles, with a calisson au Pastis that celebrates the aniseed taste of the famous apéritif!

Where to buy calissons d’Aix 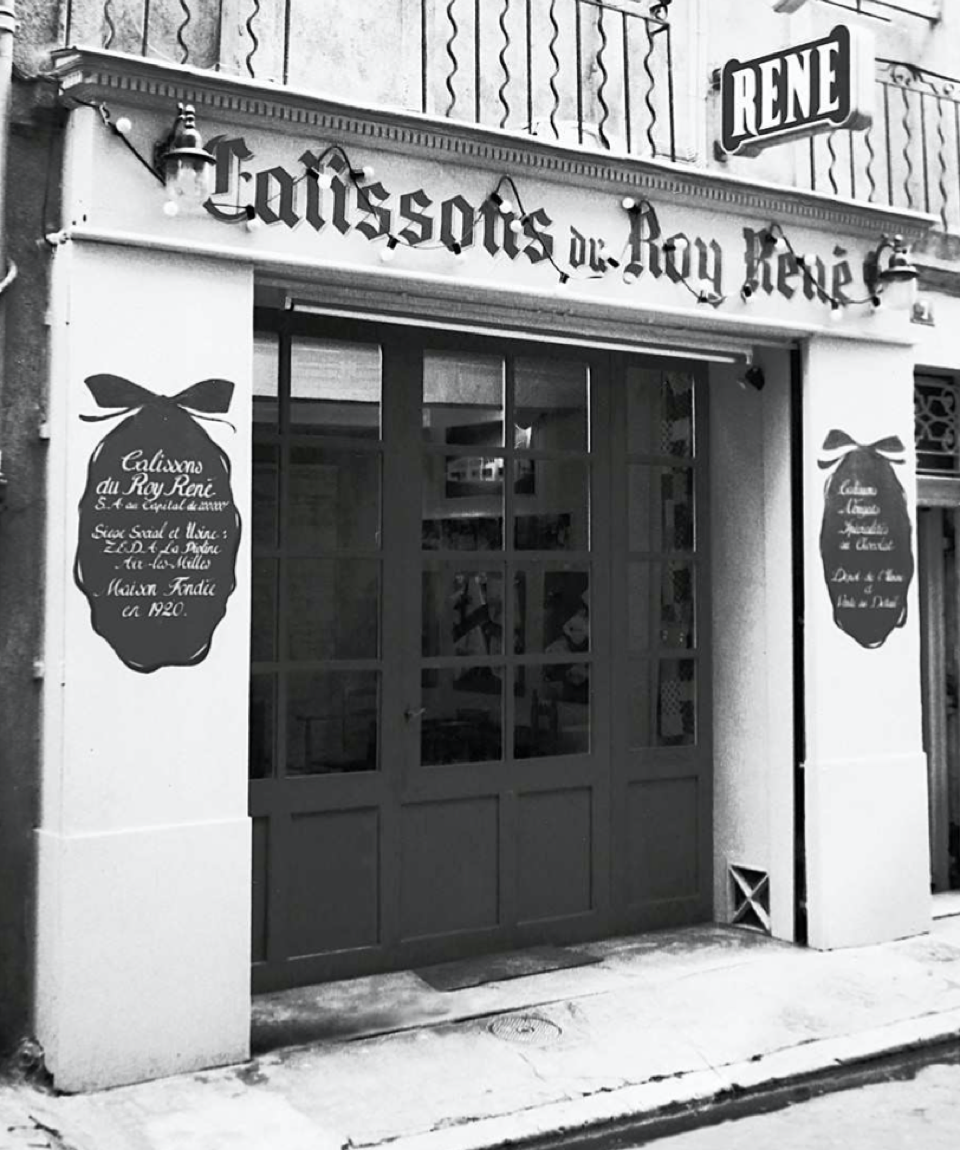 The Confiserie du Roy René is one of the most famous calisson manufacturers. In 1920 in the heart of Aix-en-Provence, recognised nougat specialist Ernest Guillet, decided to take the French sweets to another level creating “Nougaterie du Roy René”.

Later on, his son René, who had learned everything he knew working with his father, took over and in 1947 he decided to embrace the manufacture of Calissons which were an immediate success for the company. They became a key product and his finest creation such that in 1948 he retitled the company “Calissons du Roy René”

For three decades, Calissons du Roy René became one of the main attractions in Provence for sweet lovers. In 1980, Anne Guillet, the only child of René, took over the company and further improved the old recipe of Calissons.

In 1989, Anne Guillet married Maurice Farine who joined her in the business and updated the manufacturing process with new production tools, special lines and also came up with new flavours. Consequently in the 2012 the company received the EPV award (Living Heritage Company) in recognition of its efforts and success in the industry.

In 2014 the company brought stone blocks from “The Pont du Gard” which is an ancient Roman aqueduct that crosses the Gardon River in southern France. These blocks were used for the construction of the company’s museum and adjoining boutique. 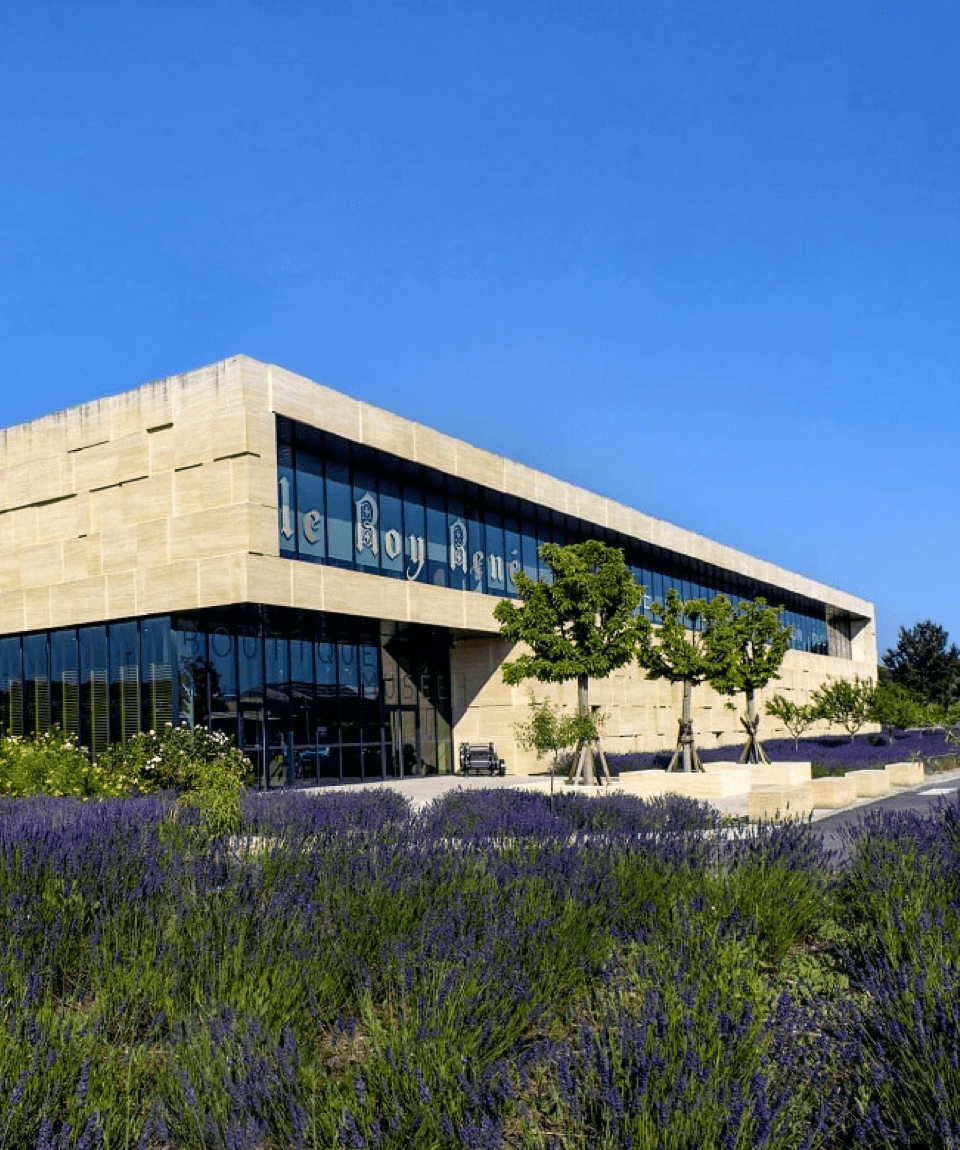 Musée du Calisson opened in 2004 and it takes visitors on a sensory journey through time and taste from the almond blossom to the delicious sweet.

In 2014, Olivier Baussan founder of “L’OCCITANE en Provence” decided to buy the company “Calissons du Roy Rene” and become its new CEO with the intention of continuing the company’s good works, celebrating the essence of Provence.

Confiserie Le Roy René is actively involved in protecting the environment thanks to a CSR approach built around 3 pillars that reflect the company’s strengths and main areas of progress. Firstly by accelerating the plan to revive almond trees in Provence by working in partnership with farmers, respecting biodiversity by promoting pollination by insects, supporting the agricultural sector and finally participating in the protection of birds with the League for the Protection of Birds.

Through its collaboration with the association Act For Planet, La Confiserie Le Roy René has already participated in the planting of an almond grove of nearly three hectares around the factory as a strong symbol of this commitment.