I’ve written about many of the buildings in Monaco but not where the Monaco Royal Family hang out. So I thought I’d remedy that omission this week.

Situated on a rocky promontory, the Prince’s Palace of Monaco (Palais Princier) is the official residence of the ruling Prince of Monaco: Prince Albert II (born 1958) and has been the home of the Grimaldi dynasty since the end of 13th century. 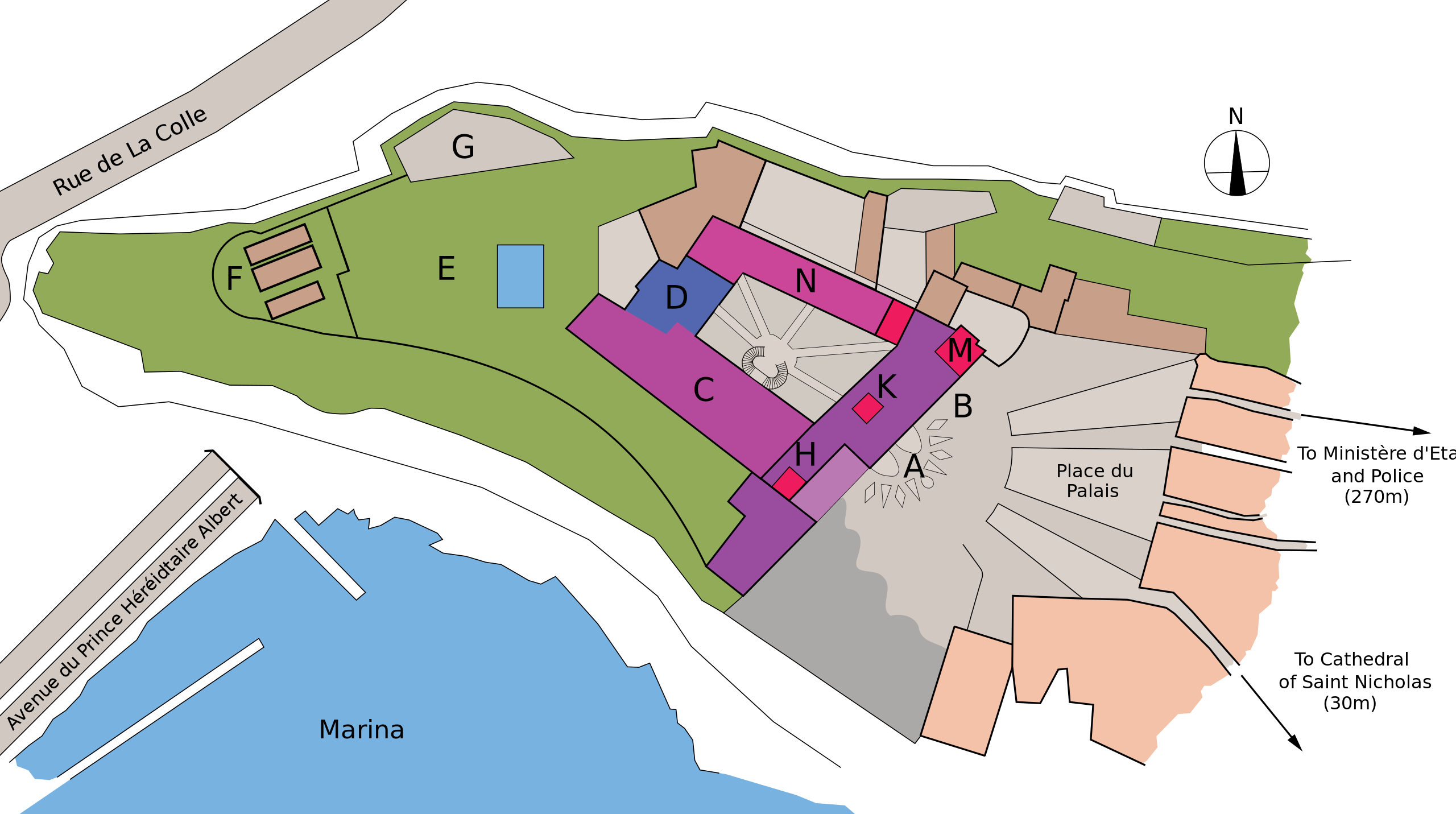 History of The Palace of Monaco

The origins of the Palace of Monaco date from 12th century, not long after the establishment of Monaco, built when the Republic of Genoa agreed with German Emperor Henry IV to build a fortress there in 1215 in return for the harbour. Furthermore, it acted as the western border fortress of the Republic of Genoa. The palace’s defences were subsequently upgraded with the addition of a rampart with four towers and an exterior curtain wall.

On 8 January 1297, the Palace of Monaco was captured by the House of Grimaldis, an aristocratic Genoese family. However, this was just the start of a period in which the palace would be seized and recaptured on many occasions.

At the beginning of the 16th century, the lords of Monaco definitively detached themselves from their mother country and had their independence recognised by the European powers: in 1512 by the King of France and by the Emperor and the Pope in 1524. Over time, the Palace of Monaco underwent several changes, with the medieval residence gradually taking on the appearance of a palace which was strongly influenced by the Italian Renaissance. The original painted decorations of the Cour d’Honneur and a number of rooms in the wing of the State Apartments bear witness to this and have recently been completely updated, preserved and restored. Honoré II (1604-1662), the first Grimaldi to bear the title of prince from 1612, endowed his home with architectural marks that signalled the dynasty’s move towards a monarchy. During the reign of his grandson Louis I, the Court of Honour was enhanced by a large horseshoe staircase, reminiscent of that in Fontainebleau, one of the residences of the King of France, who was a protector and ally of the Principality from 1641. In 17th and 18th centuries, the palace housed an extensive collection of art, especially paintings. However, having become an impressive royal home, the Palace of Monaco was devastated during the French Revolution. It was confiscated by the revolutionaries and became a military hospital and poorhouse. It was restored to the Grimaldis in 1814 under the Treaty of Paris. In 19th century, successive Princes worked on restoring the palace and retrieving the furnishings and works of art that had been dispatched during the Revolution. The palace subsequently underwent extensive and ongoing restoration, including its most recent over the past couple of years.

The state rooms are open to the public during the summer, and since 1960, the palace’s courtyard has been the setting for open-air concerts given by Monte-Carlo Philharmonic Orchestra.

However, the palace is much more than a tourist attraction and museum: it remains a fully working palace and headquarters of the Monégasque ruler, a fact emphasised by the sentries on constant guard duty at the entrance. The sovereign princes, although bound by constitution, are involved with the day-to-day running of Monaco as both a country and a business.

The Archives of the Palace of Monaco hold many documents relating to European history, including the former fiefdoms of the dynasty granted by Charles V in southern Italy in 1532, those granted following the Treaty of Peronne and those inherited by marriage. Today, these former fiefdoms are grouped together in a network based on friendship and cultural promotion known as the Grimaldi Historic Sites of Monaco.

At the end of the 1950s, Prince Rainier III began collecting old cars. His collection gradually grew over the years as he acquired more and more models, and the garage at the Prince’s Palace soon emerged as too small to contain this collection of around a hundred stunning streamlined and sporty cars, from majestic body work to gleaming hoods and regal radiator grills! In 1993, Prince Rainier III therefore decided to open his precious collection to the public. which is now located on the Terrasses de Fontvieille. It’s all well worth a visit if you’re in Monaco.

20 Comments on “The House where Prince Albert II lives”