We’re still in the kitchen lusting over French artisanal products. Today’s company is a relative youngster, dating merely from 1974 and has since passed just across the border (2008) into German hands (ZWILLING J.A. Henckels).

The company’s home region of Alsace has a celebrated culinary history, combining both French and German influences. Hearty, pork-filled stews are a staple of Alsatian cuisine, often made in one sturdy pot. Francis Staub set out to make the perfect pot in an old artillery factory – and the first Staub cocotte was born. The first of millions of cast iron pots to come.

Francis Staub and famed French chef Paul Bocuse were good friends and they actually sketched out the first Staub cocotte together on a napkin in one of Paul Bocuse’s restaurants.

One of the challenges Bocuse wanted Staub to address was successfully braising, long, slow-cooked meats. Together they tried to figure out a way to have the juices evaporate – in terms of steam – but then rain back down on the food in a kind of even shower effect, and not just drip back down the side.

La Pluie d’Arôme (Aroma Rain) is the result of the special lid design on Staub casseroles and pans. The cooking vapours condense on contact with the lid, concentrating in the form of droplets that fall back onto the ingredients. The integration of raised bumps on the inside wall of the lid allows a homogeneous distribution of the drops over the entire cooking surface. This system guarantees flavoursome, tender and tasty dishes. Staub have unique glazes that they use both on the inside and outside of the pot. Specifically to address Bocuse’s concerns, all their pieces have a black matte enamel interior which is studded with tiny pieces of quartz. If you run your finger over it, you can feel it has a little texture to it. That specific enamel does a few things. One, it’s incredibly durable. More importantly,  those little peaks and valleys of quartz create exceptional browning. 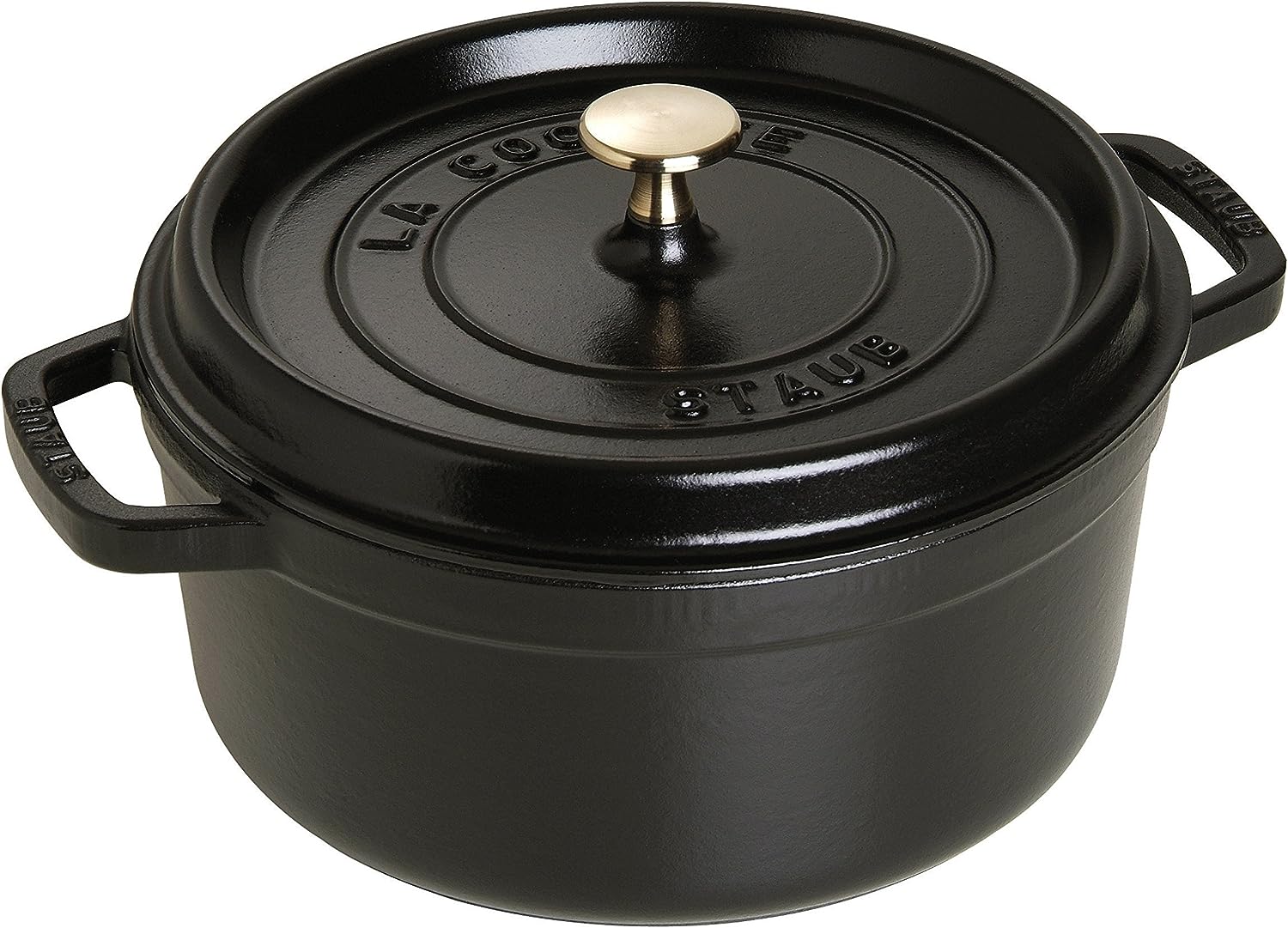 A glossy coating would not produce the same result for a recipe such as coq au vin or boeuf bourguignon. Tests have been carried out by an internationally renowned culinary institute to validate these claims. Plus, stains don’t show up on that black enamel interior, so it always looks great even after it’s been used a ton of times.

Another USP is the wall thickness and the ability of the product to handle stress. When I say stress, it can be a couple different things. It can be temperature stress, meaning going from high to low temperatures. Then it can also be what’s called mechanical shock, which is the pot banging into things or being dropped. The more it can handle stress, means you won’t have any chipping of glazes, and that you can go from cold to hot pretty quickly and neither the glaze nor the pot will crack.

Staub pots always come with a metal knob. Sometimes it’s stainless steel and chrome. Sometimes it’s brass. Sometimes it’s copper. But from the beginning, it has always been metal. The advantage of metal is that it can take really high temperatures giving the product a lot more flexibility than when you have a plastic knob.

Back in 1974 there were no computers or CAD (a design software that’s now a pretty critical tool for designers, engineers, architects, and more). So Francis and his employees used wood to figure out the exact shape and dimensions of the pots. The pots are cast in molds made of sand (and water and some additives)! The sand comes from a place near Paris and gets pressed together to form a sand-castle-like mold.

The melted cast iron goes into the mold, and once the cast iron has hardened, the sand goes through a “shake out” process, during which the mold breaks apart and the sand is recycled to be used again.

From start to finish, the process takes about one week — no matter the size of the pot. The process starts with raw materials. Then there’s the melting, tooling, casting, blasting, grinding, glazing, firing, etc. Each piece is unique and comes from a traditional French manufacturing process. From beginning to end of the production chain, there are around a hundred control points (visual or technical) to ensure the manufacture of very high quality products. Between 10 and 20 people actually touch each pot, and while a robot is usually involved (definitely for the more basic pots, it’s probably not for the fun shapes like the pumpkin or the tomato).

You might think the richer, deeper coloured glazes are the hardest to get right, but white is actually the most difficult. A company representative said: 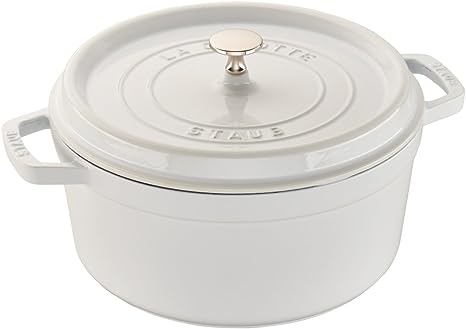 White is sensitive to pollution. It’s easy for the transfer of other colours. White also reacts very quickly to temperature changes and easily changes to an ivory.

The Staub cast iron casserole, the Cocotte, is the flagship of the Staub product range, accounting for more than half of the company’s sales, 90% of which are outside of France. But the cookware isn’t just popular with domestic cooks, chefs love the range too. In France, nearly half of the Michelin starred chefs work with Staub; In Japan it’s over three quarters but then the Japanese adore anything French! Not only is the product made to last a lifetime, but from the manufacturing standpoint, it’s a thoughtful, sustainable manufacturing process. The factories have people who’ve been working in them for generations and generally live very close to their place of work.  And their concept of sustainability is:

There is respect for the land and the water and the air quality. There’s just a ton of thought that’s put into this and what it does to the immediate community. They’re making sure it’s not taking away from, but only adding to, those communities.

Today, the value of Made in France is a true guarantee of quality and seriousness, which has contributed enormously to the expansion of the brand in key markets such as North America and Asia. The luxury industry, which is largely made up of French companies, has in parallel promoted the renown of traditional French know-how. Haute-couture in the kitchen is also Made in France!