I’m carrying on with my series of posts about Villages Perchés (perched villages) because there are still so many I’ve yet to cover. Today’s village of Duranus is another regular summer ride and one of those villages grouped together by the Métropole Nice Côte d’Azur tourist department as the Route des Villages Perchés (Route of Perched Villages). The others are: Aspremont, Carros, Castagniers, Saint-Jeannet, Coaraze, Colomars, Falicon, Eze, Levens , La Gaude, Lantosque, La Roquette-sur-Var, Saint-Blaise, Utelle and Tourrette-Levens.

Duranus is around 30km north of Nice, between the valleys of Vésubie and Paillon whose highest point at 1,501 metres is the the summit of Rocassiera.

In 17th century, the inhabitants of Rocca-Sparviera, which had been settled since the Middle Ages, chose to move further down to the countryside overlooking the Vésubie and Paillon valleys, thereby founding the village of Duranus. The name Duranus probably originates from the pre-Indo-European root for steep relief.

In 1363 Pierre Marchesan had acquired from Louis and Jeanne, king and queen of Jerusalem, the castle and jurisdiction of Rocca-Sparvera, for the sum of 700 gold florins. Thereafter, the community in Duranus remained under the domination of this powerful family until the French Revolution.

The period from 1792 onwards was painful for the local population because of clashes with French soldiers seeking to annexe the area for the County of Nice, and France.

The village has quite a small population. While numbers , remained stable in the Middle Ages and into 16th century, at around 225 inhabitants, the community slowly grew reaching 287 in 1804.  Aggravated by the poverty of the land, the rural exodus affected the village before the WWI. After reaching a historic low of 79 inhabitants in 1954, the population has continued to grow.

The houses in Duranus look as is they are scattered on the hillside but are in fact grouped into two districts, La Crotta and La Carriera. This form of dispersed urbanisation, unlike other perched villages,  is perhaps explained by the absence of any plan when the village was established.

Because of the steep inclines and poor soil, the inhabitants have shaped the landscape by creating terraces of olive trees protected by dry stone walls, a technique used since the Bronze Age. 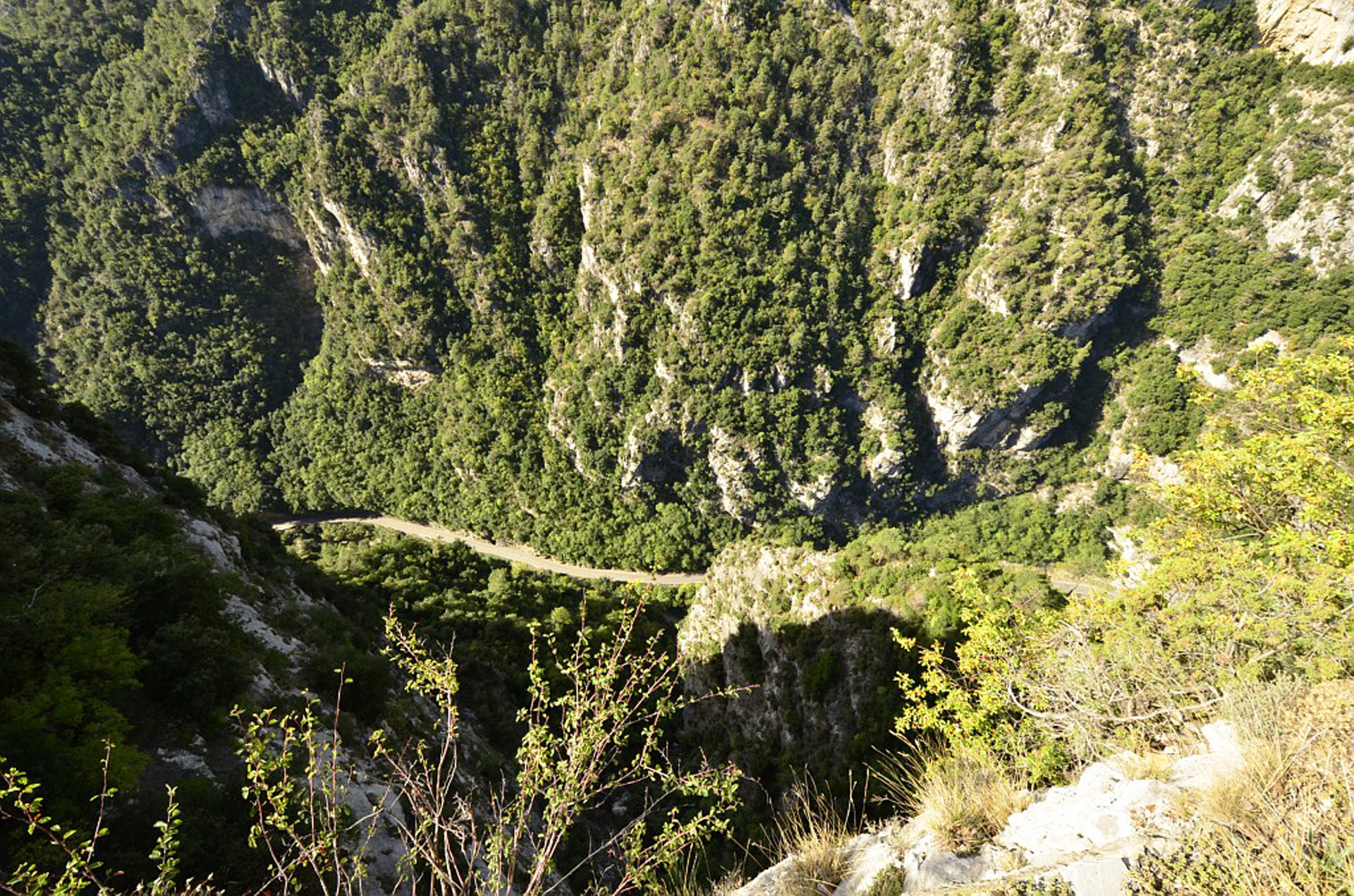 The village is famous for the “Saut des Français” which dominates the Vésubie with a vertiginous drop of 200 metres. Allegedly the barbets, who opposed the integration of the County of Nice into revolutionary France, pushed revolutionary soldiers into the void. However, there is no documentary evidence of this happening in Duranus. Nevertheless, the judicial archives report a similar act on the opposite bank, in Utelle, where three soldiers were pushed from the top of a rock by the barbets.

In fact, the reputation of the “Saut des Français” owes a lot to tourist guides who, since the end of 19th century, have tried to give the place some character. 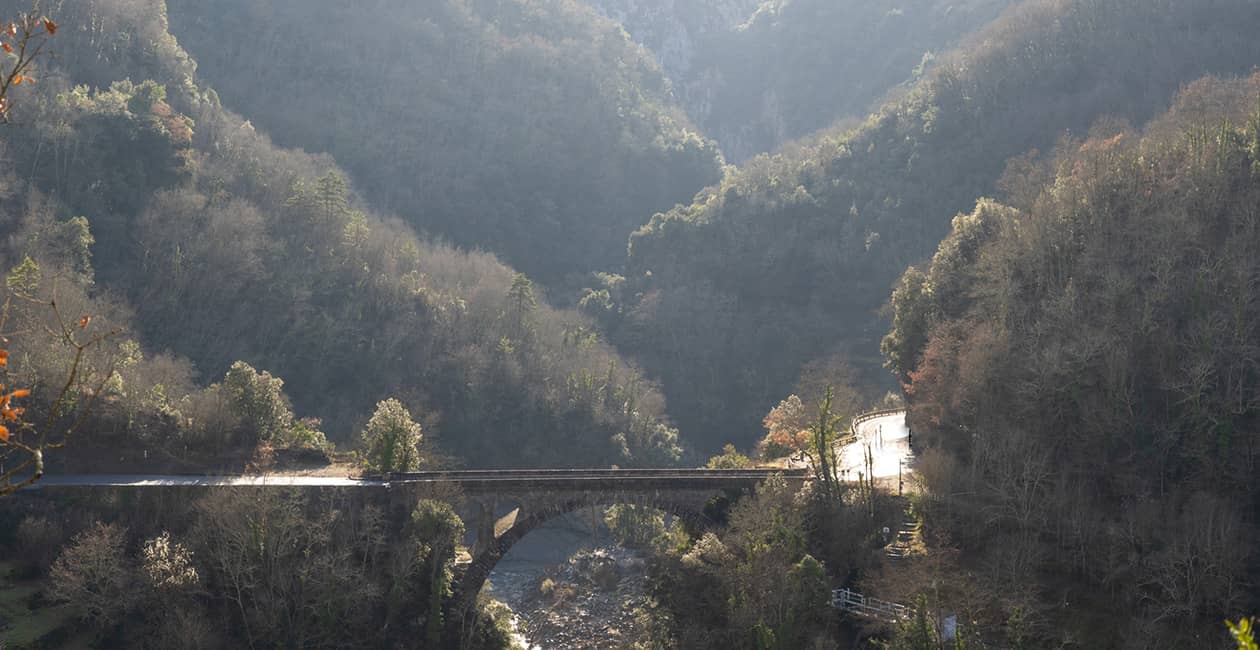 The village’s water supply comes from the so-called Cognet valley, by way of an aqueduct built around 1858, making it possible to irrigate the vegetable gardens located near the houses. The first fountain established in the village dates from around this date. 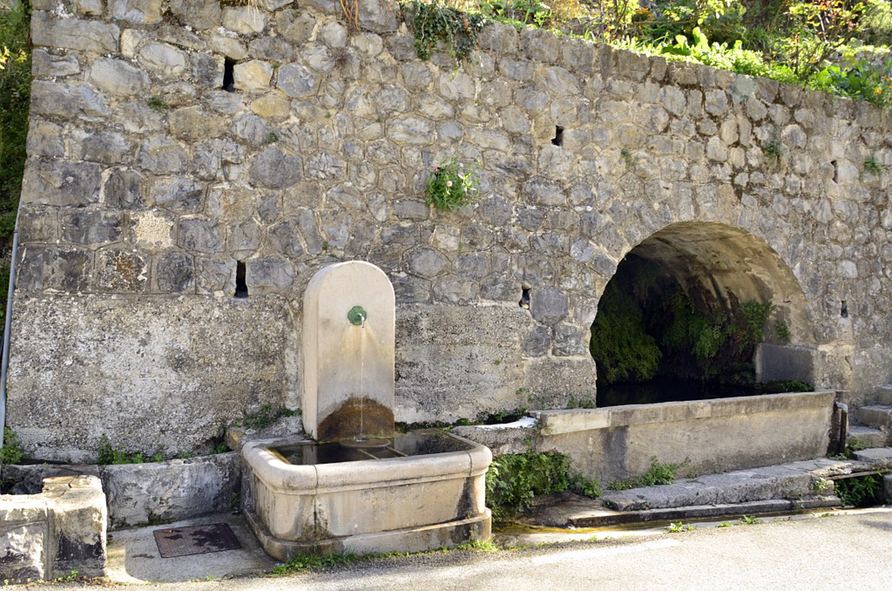 Embedded in the village’s wall, this fountain associated with the washhouse was used by carters using a new roadway built to connect Nice to Saint-Martin-Vésubie via Levens, Duranus and Lantosque.

Of course, no village would be complete without at least one church. Duranus’s small Saint-Michel chapel is probably built on the site of the old parish church. Inside, it is semi-circular vaulted and the choir is in the cul-de-four. In very poor condition at the beginning of 20th century, it was restored on the initiative of Father Marc Clary and inaugurated in May, 1924. Built on a promontory, the site of the chapel offers a grandiose panorama stretching from the Mercantour to the Mediterranean.

12 Comments on “Trip to Duranus”