Continuing the Basque theme, this week and next, I’m looking at (French) Basque companies which make products in the area. You may not be familiar with such products, but they are real institutions in the Basque Country. 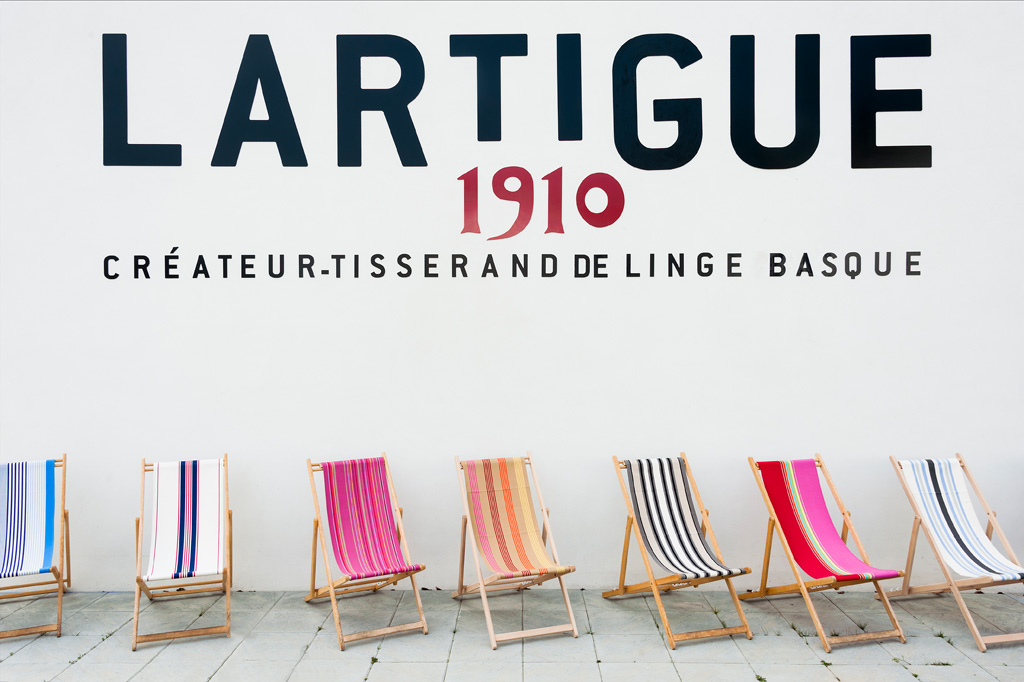 In 1910 Calixte and Anastasie Lartigue established one of the region’s first workshops producing fabrics for espadrilles and berets. Since then, four generations have perpetuated the art of weaving with creativity and passion. Current CEO Philippe Lartigue, created the “1910 Lartigue” brand as a tribute to the family’s first weaving workshop. 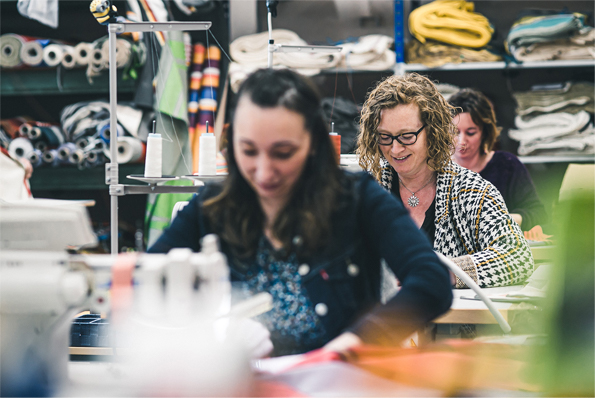 Two kilometres south of the railway station in Oloron-Sainte-Marie, on Georges Messier avenue, stands an imposing L-shaped house bearing a sign “Lartigue 1910, designer-weaver of Basque cloth, workshop visit – boutique.” There isn’t a single sign in the road from Oloron to indicate that here in Bidos, a small village of 1,200 residents in the Pyrénées-Atlantiques, is the house of one of the last weavers of Basque cloth. And yet it’s well worth the visit. The workshops where homespun Basque cloth is woven on machines that still run today are almost the last bastions of this age-old craft.

Philippe Lartigue is one of the few master-craftsmen weavers who uphold and defend the history of Basque cloth. It runs in his veins. His ancestors’ fault really. He explains:

It was in this very house that my great grandfather built his workshop. It’s said that it was his wife who advised him to learn how to weave!

In 1909, Calixte, who had been a farmer, left to learn the profession in the spinning mills of Northern France. When he returned to the south-west in 1910, he and his wife Anastasie created one of the first workshops in the region for making cloth for espadrilles and berets in an old tannery. Back then, espadrilles were work footwear. The workshop supplied the biggest espadrille manufacturers in Mauléon, one of which  produced 5 million pairs a year!

Calixte’s successive descendants took over the reins and, in the 1980s, following the decline in local manufacturing of espadrilles triggered by the arrival of the first Asian imports on the French market, Philippe’s father and his cousin decided to diversify their production and bought the Laclau establishment, a small Basque cloth factory in Oloron-Sainte-Marie. That was when Philippe’s father asked him to join the company.

Philippe hadn’t intended to take over the family business though he had studied economics at university. He started at the bottom and literally climbed every rung of the ladder before taking the helm in 1989. 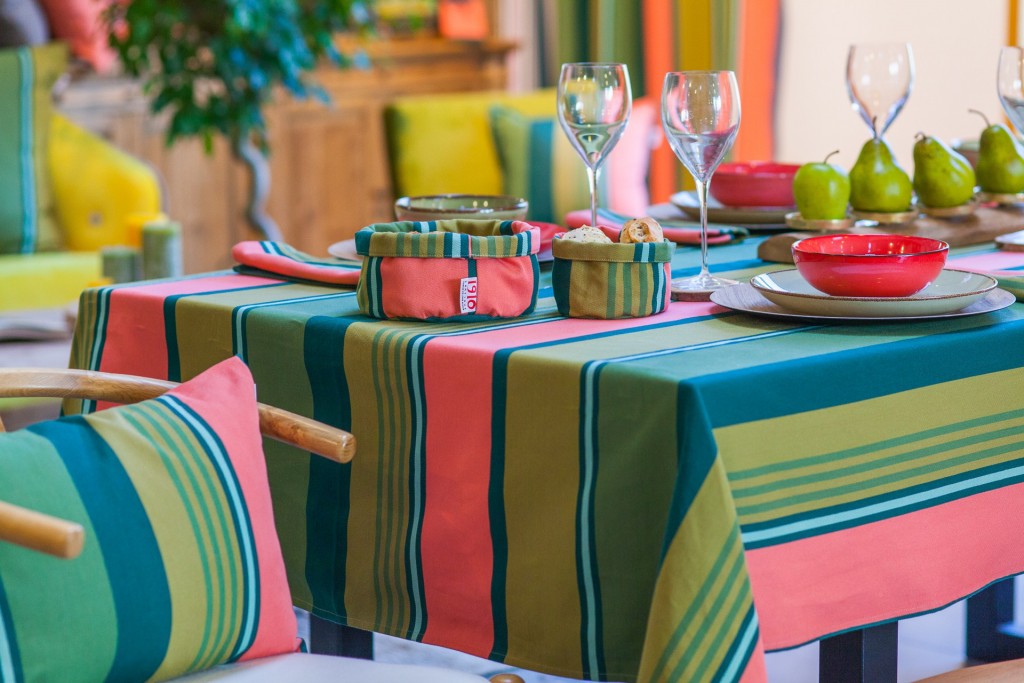 In 1998 the company stopped weaving cloth for espadrilles for other manufacturers but continued with about a dozen patterns for its own brand. In terms of fabrics, the arrival of stylists added a flourish of imagination and creativity, restyling bayadere stripes following the latest designer trends.

The company produces fabrics (cotton, linen, coated and deckchair fabrics) with Basque or Bayadère stripes. A large range of products are then made from these fabrics and available to buy in their shops. 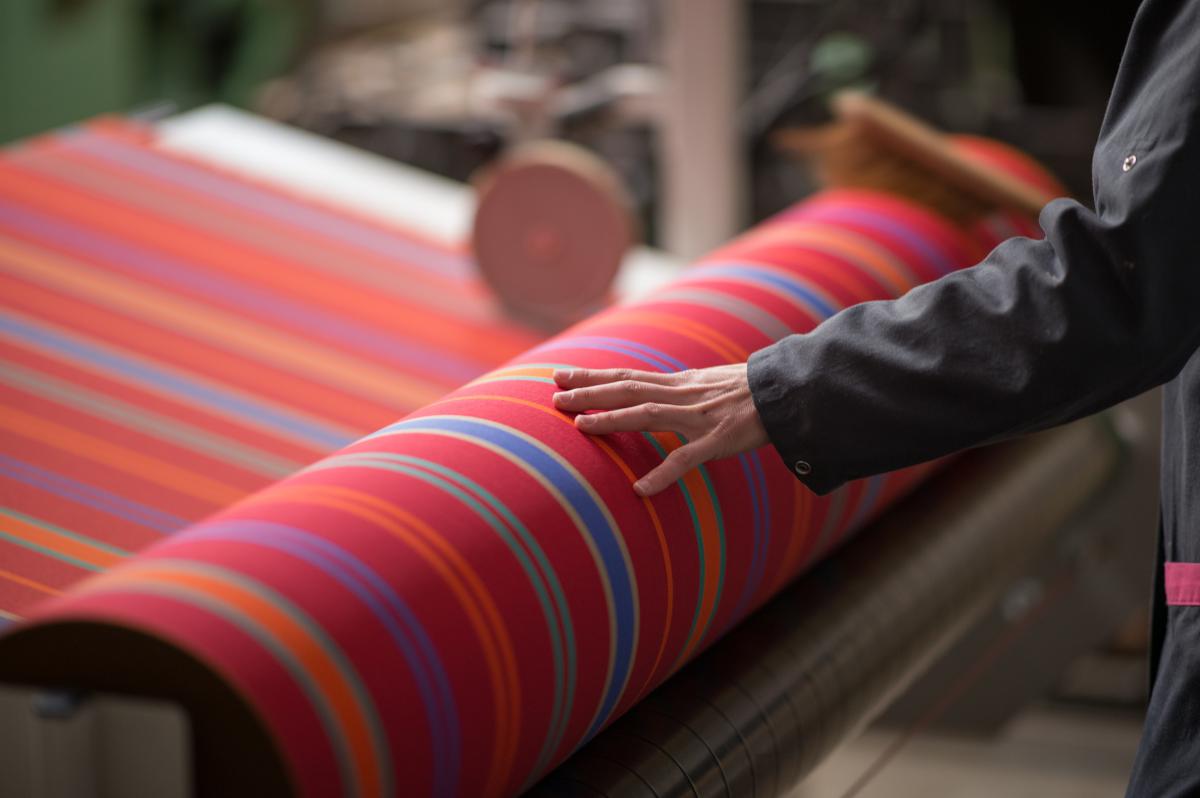 Just for a bit of background history, most Basque cloth weaving companies set up at the beginning of 20th century in the Béarn region because they could use the hydraulic power produced by the turbulent Gave, an abundant source of energy suitable for mechanical weaving looms. Also the Béarn region and the Basque Country were geographic areas that naturally lent themselves to growing flax, and so Basque cloth was entirely made of linen. 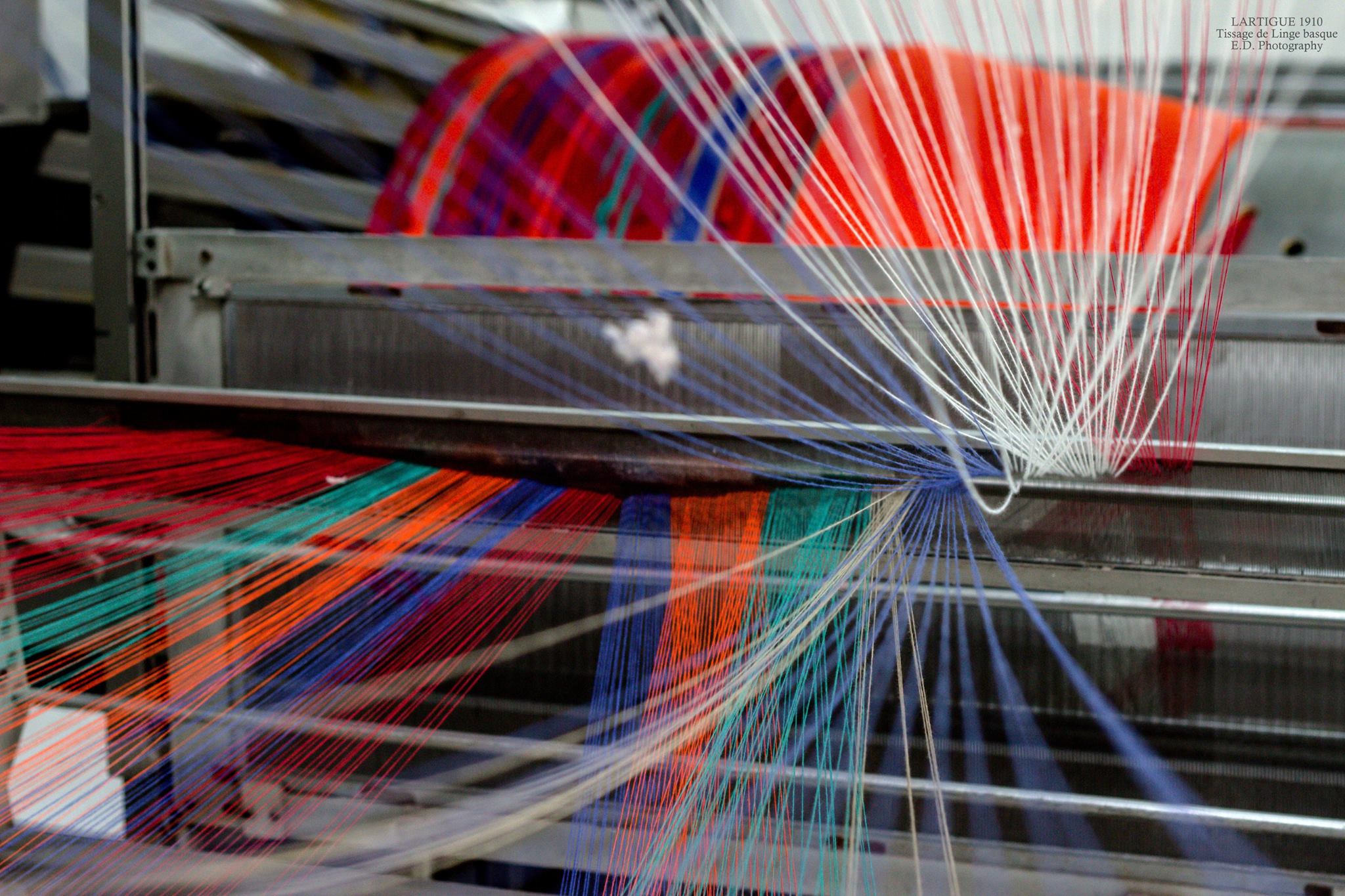 Basque cloth started out as a piece of linen fabric with seven coloured stripes called a mantle that was put on the backs of oxen. The seven stripes represented the seven Basque Provinces, and legend has it that the width of the stripes was an indication of social status. The development of the post-war tourism industry turned the traditional cloth into a decorative fabric for tableware.

The company combined imported Indian cotton with the linen, thereby making the fabrics easier to work with, to use, to wash, and also less expensive.

Lartigue 1910 in 2020 finally obtained an IGP (Protected Geographical Indication) for Basque cloth to combat counterfeit products and misuse of the name. To be declared authentic, it must be woven in a very specific geographical area, the Basses Pyrénées. This zone was defined in 1953 by the Basque cloth weavers’ trade union. 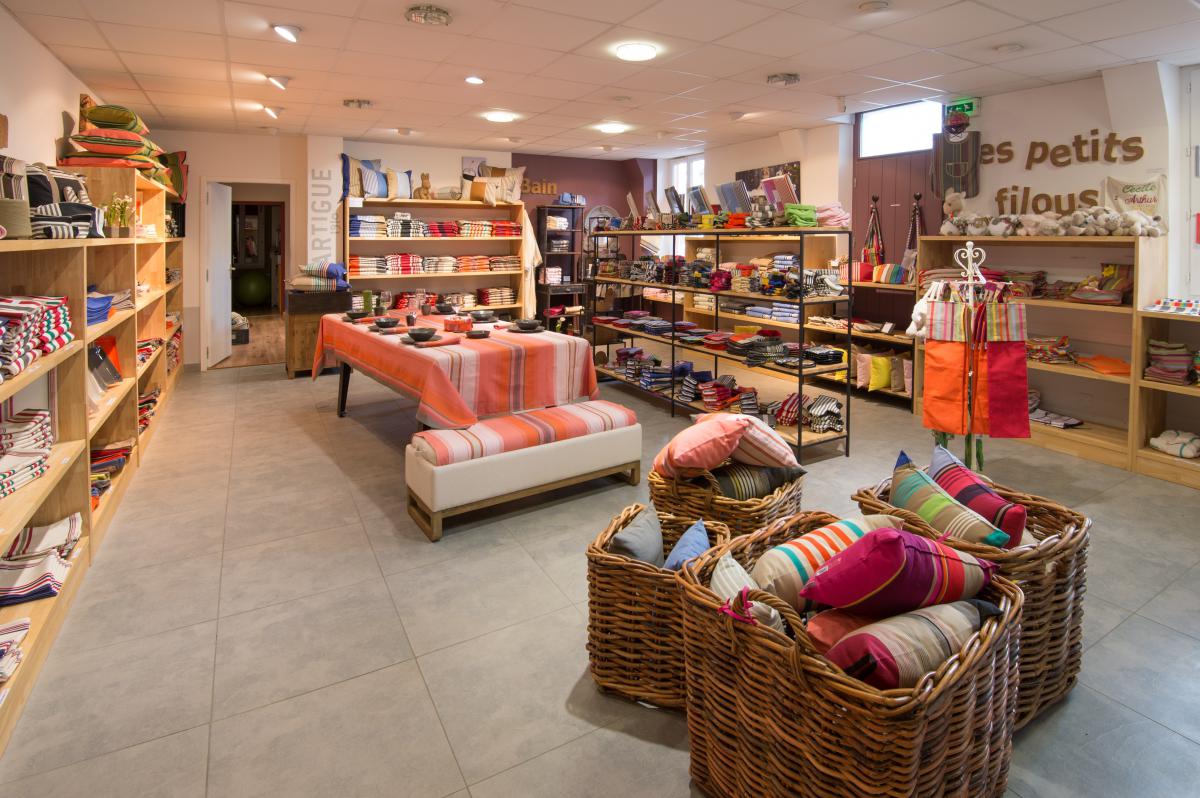 It’s easy to understand Philippe Lartigue’s enthusiasm when you see what the fabrics sold by the metre are turned into: tablecloths, teacloths, aprons, potholders, curtains, cushions, beach bags or hand bags, toilet bags, glass cases, bathrobes, dressing gowns and more. An entire collection sporting stripes in an infinite spectrum of colours can be viewed in both workshop outlets in Bidos and Ascain, and in the boutiques in SaintJean de Luz and Biarritz.

The company even has an in-house designer behind the stripes. After studying at the École nationale supérieure des arts appliqués et des métiers d’art in Paris, she worked in watchmaking for a French brand of watches. She says:

It was a really versatile and creative product, designed in France but manufactured in Hong Kong. I wanted to find a longstanding brand name with a soul, to come back to South West France and above all, to lend my skills to an ethical company.

She found out that the Lartigue house was looking for a designer and, as the establishment had been awarded the “Living Heritage Company” label in 1997, she didn’t think twice. Her role is to keep her finger on the pulse regarding current trends while preserving the company’s DNA. There always has to be a reference to the history of the Basque region, folklore and values. 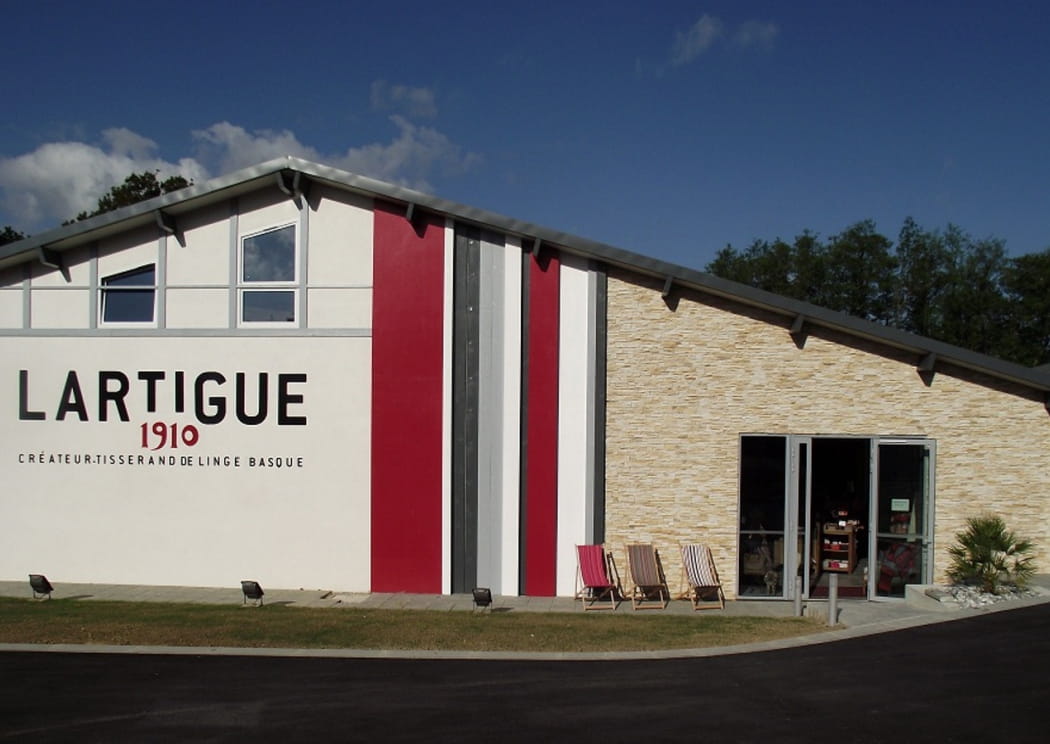 In recognition of its unique artisanal know-how, Lartigue 1910 obtained the Geographical Indication “Basque Linen”, to honour French manufacturing excellence, ethics and responsibility. Since 1910, the Lartigue family has perpetuated a unique artisanal know-how by weaving Basque linen in its workshops in Bidos and Ascain in the southwest of France. From winding to tailoring, through weaving or warping, each manufacturing step is carried out with the greatest respect for the tradition of Basque linen weaving.

Visiting one of the workshops is an opportunity for tourists and locals alike to explore the history of this territory, its traditions and learn more about an iconic product that many already have in their homes. All the company’s products are now woven from certified organic cloth. A commitment to socially responsible manufacturing that respects the environment.

In 2017 the company joined the exclusive circle of companies distinguished by the EPV Label. This award set up by the State distinguishes French companies with excellent artisanal and industrial know-how. 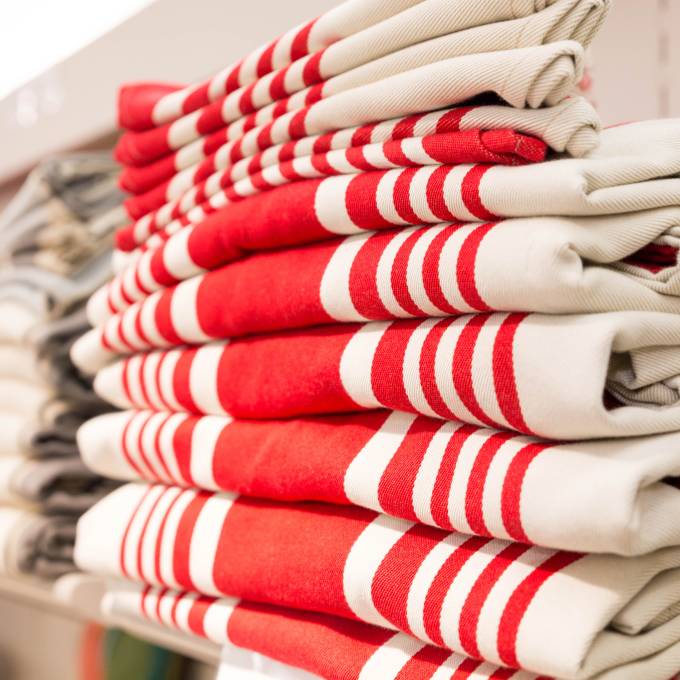 All images courtesy of Lartigue 1910