One from the Vaults: There’s no such thing as too much

I’m heading back to 2012 and a post I wrote about the looming cocoa crisis which fortunately came to nothing. But in the interests of all things chocolate, I thought it was worth a revisit.

I hate to be the bearer of bad news so soon after the festive season but, start stockpiling chocolate, a cocoa crisis is looming. Yes, according to the scaremongers, chocolate will soon be considered as luxurious as caviar, and just as expensive. Those City boys are going to be buying cocoa futures like there’s no tomorrow, which will only exacerbate the problem.

Allegedly, within the next eight years there will be a million ton cocoa shortage, forcing significant price rises in chocolate and related products. It’s the fault of those in the East who have developed a taste for Western treats. Hands off our Mars bars!

I sense the problem’s already begun. One of my current favourite television adverts features tennis player Roger Federer (who knew he had a sense of humour?) going through Customs with a tennis bag full of round Lindor truffles which look like tennis balls in the X-ray machine. The stunningly attractive Customs officials first taste and then confiscate the chocolate while threatening/promising Roger with a strip search.

It’s obviously a spoof as anyone who travels knows that absolutely none of the customs officials look like the two women in the advert. Though they might well confiscate your goodies and subject you to a quick once over with the marigolds (rubber gloves).

I understand the real crux of the cocoa problem is low yields and inefficient farming methods in the prime cocoa producing areas, largely in West Africa.

Chocolate comes from the dried and fermented seeds of the tropical Theobroma (meaning food of the gods) cacao tree. They’re small and require rich, well-drained soil. They naturally grow within 20 degrees of either side of the equator because they need about 2000 millimetres of rainfall per annum, and temperatures in the range of 21 to 32 °C. Cacao trees cannot tolerate a temperature lower than 15 °C. (Damm won’t be able to grow any on the balcony.)

The three main varieties of beans used in chocolate are criollo, forastero, and trinitario. Criollo is the rarest and most expensive cocoa on the market, and is native to Central America, the Caribbean and South America. Criollos are particularly tricky to grow and produce low yields. The most common bean is forastero, a native of the Amazon basin. The African cocoa crop is entirely of the forastero variety and they are significantly hardier and of higher yield than criollo. Trinitario is a natural hybrid of the other two varieties and hails from Trinidad. 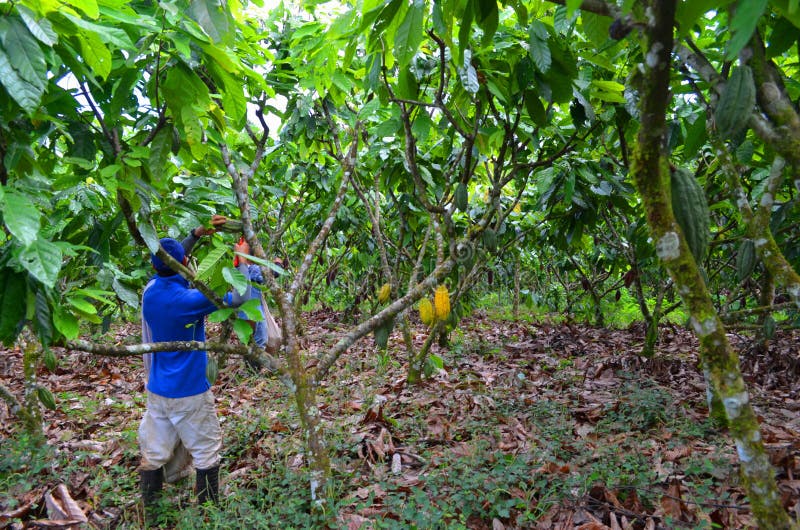 To harvest cacao, the fully ripened pods are cut from the tree and the beans and surrounding pulp are extracted and placed in bins to ferment for about seven days. The beans are then spread in the sun for 5-7 days to dry quickly and to prevent mould growth before being taken to the chocolate factory to be cleaned, roasted and graded. The shell of each bean is removed to extract the nib. Finally, the nibs are ground and liquefied, resulting in pure chocolate in fluid form which can be further processed into cocoa solids and cocoa butter.

Chocolate first started life as a beverage enjoyed either hot or cold. It was imported into Europe after the Spanish conquest of the Aztecs. It quickly became a Spanish court favourite and within the next century its popularity spread throughout Europe with the first chocolate house opening in London in 1657 and in 1689, noted physician and collector Hans Sloane created a milk chocolate drink.

Come the Industrial Revolution, the Italians invented the first form of solid chocolate. The Swiss jumped on the bandwagon and opened the first chocolate factory. Then the Dutch patented a method for extracting the fat from cocoa beans to make powdered cocoa and cocoa butter. But it was the Germans who made the first chocolate bar swiftly followed by the British, J S Fry & Sons. Enter the Cadbury Brothers from Birmingham and the rest is history.

23 Comments on “One from the Vaults: There’s no such thing as too much”