This continues my series of posts about towns along the French Riviera coastline.

Villefranche-sur-Mer is located south-west of the Principality of Monaco, close to Saint Jean Cap Ferrat.

The site of what is now Villefranche and surrounding Beaulieu sur Mer and Saint Jean Cap Ferrat has been settled since prehistoric times. Celto-ligurian tribes roamed the area and established farming communities on the surrounding hills. The Greeks and later the Romans used Vellifranche’s natural, deep harbour as a stop-over en route to the Greek settlements around the Western Mediterranean. After the conquest of Gaul by Julius Caesar, the Romans built an extension of the Via Aurelia which passed through the settlement of Montolivo.

By the fall of the Carolingian Empire, the area was part of Lotharingia and later part of the County of Provence. In 1295, Charles II, Duke of Anjou, then Count of Provence, enticed the inhabitants of Montolivo and the surroundings to settle closer to the coastline in order to secure the area from pirates. By charter, he established Villefranche as a “free port”, thus the name, granting tax privileges and port fee rights that lasted well into 18th century.

By 1388, East Provence had became part of the Duchy of Savoy as a result of the disputed succession to the heirless Queen Joan I of Naples. For the next 400 years, the area known as the County of Nice was hotly disputed between the Holy Roman Empire, to which Savoy was an ally, and the French.

In 1543, the Franco-Turkish armies sacked and occupied the city after the siege of Nice, prompting Duke Emmanuel Philibert to secure the site by building an impressive citadel and a fort on nearby Mont Alban. In the late 17th century, the area fell to the French but was returned to Savoy after the Peace of Utrecht.

During 18th century, the city lost some of its maritime importance to the new harbour being built in Nice but remained a military and naval base. In 1744, a Franco-Spanish army under the Prince of Conti overran the Piedmontese regiments of Charles Emmanuel III of Sardinia at the Fort of Mont Alban in the heights above the town.

In 1793, the French returned to re-occupy Villefranche and the county of Nice remained part of the Napoleonic Empire until 1814. It was returned to the Kingdom of Sardinia by the Congress of Vienna.

In 1860, as a consequence of the Risorgimento, it was given to France by treaty following a plebiscite.

By late 19th century, it had become an important Imperial Russian Navy base and the Russians established an oceanographic laboratory in the old lazaret. Let’s hope the Russians are not planning on reclaiming Villefranche!

The site was also the winter residence for royalty and wealthy visitors.

Villefranche’s bay is notable for reaching a significant depth only a short distance from shore. As a result, it has become an important port over the years. Since World War I, the United States Navy has called on a regular basis, making Villefranche the home port of the U.S. 6th Fleet from 1948 to February 1966, when French President Charles de Gaulle withdrew France from NATO and required U.S. forces to leave. Just prior to 1966, the flagship of the Commander Sixth Fleet rotated between USS Springfield and USS Little Rock. Since the 1980s Villefranche has been used by cruise ships. It is the most visited cruise ship port of call in France. 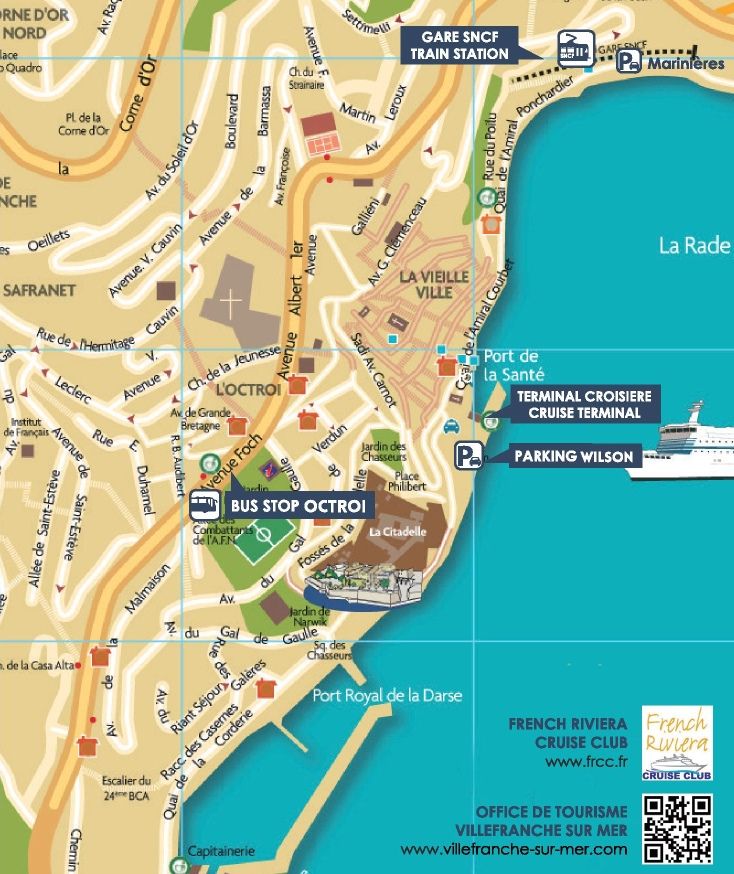 Villefranche -sur-Mer is one of France’s most beautiful harbour towns, overlooking crystalline waters framed by Provençal greenery. Its deep water means all kinds of boats can drop anchor there. We love exploring the old town’s winding streets, where the orange-tinted façades are reminiscent of the ever-present sun that shines on Villefranchois territory.

The warm colours of the houses contrast with the pale shades of the louvred shutters, which are often half-closed, allowing a glimpse of the inhabitants’ peaceful lives. We always enjoy a leisurely stroll around the maze of arcades and steps, including the underground street, Rue Obscure, an underground street built in 13th century to facilitate the passage of soldiers.

Like many of the coastal towns, there’s plenty of architectural interest. The Church of St. Michael has a façade in a sublime colour palette of white, pink and pale yellow. Its colours and 18th century Baroque architecture echo the opulent religious buildings of Italy. The inside of the monument, in amber shades, contains one of the oldest organs in Alpes-Maritimes, dating from 1790. There is also a life-size, recumbent statue of Christ, carved from the wood of a fig tree.

My favourite however is probably the Chapel of St. Peter near the fishing harbour, which was decorated by Jean Cocteau in 1957 – more of whom tomorrow.

And let’s not forget the citadel founded by the Duke of Savoy in 1554 for the purpose of guarding the harbour. It was purchased by the commune and restored in 1981.It now houses the Town Hall , museums,  a conference centre,  an open-air theatre and gardens. It offers a reminder of the medieval glory of this ancient town.

The citadel has three museums within it. The Volti Museum dedicated to the art of sculpture, with a hundred or so bronze, terracotta and copper female statues revealing their voluptuous curves in contrast with the rough stone. The Goetz-Boumeester collection including famous paintings, notably by Miró and Picasso, with a total of a hundred or so works ranging from figurative to abstract art. Lastly, the Roux collection of nearly 300 historical polychrome ceramic figurines illustrating daily life from the Middle Ages to the Renaissance.

You could quite easily pass a morning, an afternoon or indeed the whole day here.

21 Comments on “Trip to Villefranche-sur-Mer”