The house where Jean lived

What would you do if you invited someone to spend a week at your holiday home and he decided to redecorate it and then he decided to stay – indefinitely?  Sounds like the stuff of nightmares, mine at the very least. But hostess Francine Weisweiller was thrilled when this happened to her. 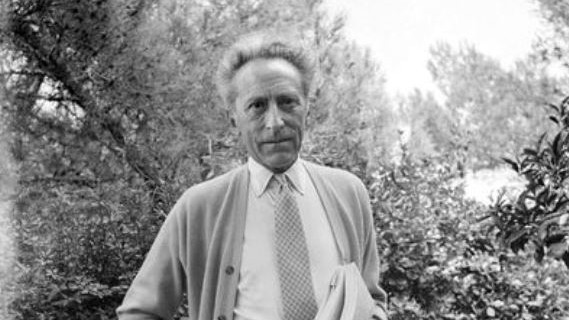 In 1950, when Francine met Jean Cocteau, she was a 34 year old Parisian socialite bored with her bourgeois lifestyle. Cocteau was a 61 year old overseeing the making of a film based on one of his books, “Les Enfants Terribles”. They were introduced by Francine’s cousin, who was an actress in the film and a friendship immediately blossomed between them.

When the movie was finished, Francine invited Cocteau and his 25 year old companion/adopted son, Edouard Dermit, to spend a week at her holiday home on the French Riviera. It was in the village of Saint Jean Cap Ferrat which had once been known as Cap-Saint-Sospir after a sixth century monk who had lived in the area. Francine adopted the name and her villa became Villa Santo Sospir.

After just a few days of rest and relaxation at Santo Sospir, Cocteau was ready for another project. Since most of the walls in Francine’s newly acquired villa were bare and white, they reminded him of giant canvases and they called out to him to decorate them. He asked Francine if he could make a charcoal design over the fireplace, she immediately agreed and a drawing of Apollo, the sun god, appeared. Cocteau decided that Apollo needed to be flanked by two priests, one on each side. Then he took the advice of Matisse who said that if you decorate one wall of a room, you have to do the others. So he did all the walls in the living room. Then he did the doors. Of course the doors led into other rooms and the decorated doors made those walls look bare so he had to draw on them as well. And so it continued for six months all through the house.

To Cocteau the walls were like a person’s skin and he wanted to tattoo it – and this villa got a full body tattoo. He worked his way around the house covering every wall with his art. He didn’t move the furniture, he simply drew around it or, in some cases, over it, making it part of the design. He did the entire house without sketches, drawing directly on the walls. First he drew his designs in charcoal. Then he used coloured pigments mixed with raw milk to make a tempera to highlight his lines.

The Saint Jean Cap Ferrat coastline reminded Cocteau of Greece and most of the designs in the villa are inspired by Greek mythology with a little nod to local culture and the sea. For example, The Apollo over the fireplace has eyes designed as fish and the priests on each side are represented by Villefranche fishermen, wearing traditional hats and carrying their nets.

Cocteau left only one wall “tattooless”. The dining room wall is covered by a tapestry representing the biblical story of Judith and Holofernes. And it was designed by, who else but, Jean Cocteau. He had it made as a gift for Francine. His one week holiday had turned into a six month decorating frenzy. But even when all the walls were covered with his tattoos, Cocteau still didn’t leave. He found more decorating to do. He designed two mosaics at the entry of the house and decided that the tattooed walls made the ceilings look bare so then he had to do all the ceilings. He came for seven days and stayed almost 11 years.

It was an unconventional household, but they formed a seemingly happy family unit consisting of: Cocteau, the genius in residence, in his sixties; Francine, his adoring friend and patron in her thirties; Edouard, Cocteau’s companion and adopted son in his twenties; and Carol, the young daughter of Francine, who was seven when Cocteau arrived. Carol lived in Paris with her father where she was raised mostly by nannies but she counted the holiday time spent at Santo Sospir as her real family time. She adored Cocteau and looked at him as a friend and second father. At Santo Sospir, this little blended family painted, read and entertained other famous artists and actors, that is, when they weren’t travelling around on Francine’s yacht.

Cocteau’s one week stay ended 11 years later when he and Francine had differing opinions about her new boyfriend. Fortunately for Francine, she liked Cocteau and his art (because she ended up living with both for quite a long time). So let this be a lesson if you are thinking of inviting an artist for a visit. Be sure to check their portfolio first!

Other Cocteau sites in the area

The Chapel St. Pierre is a very romantic little fishermen’s chapel on the port of Villefranche-sur-Mer which was fully decorated (inside and out) by Jean Cocteau. 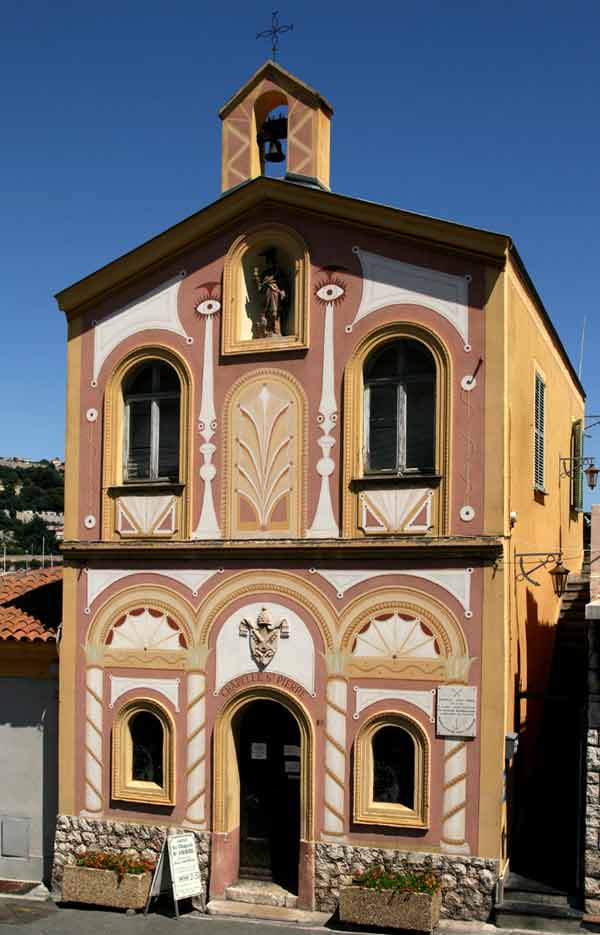 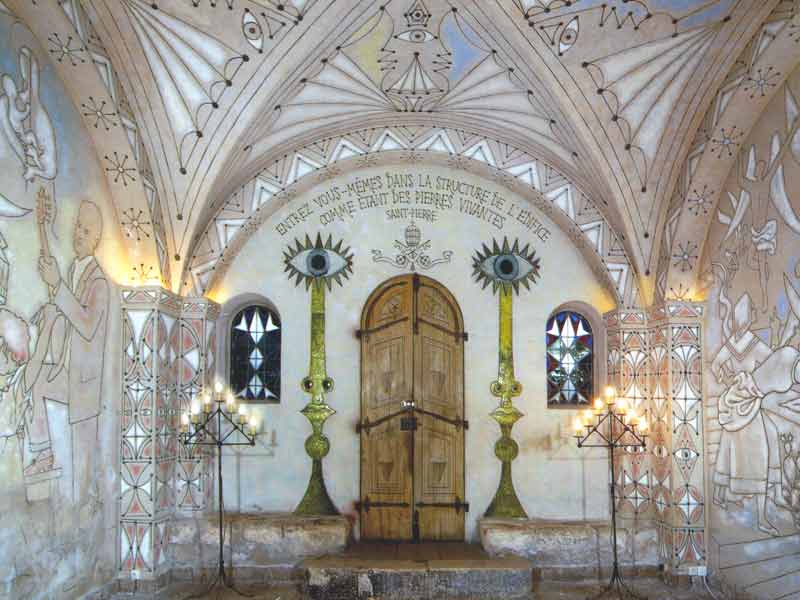 Nestled between chic cafés on Quai Courbet, and very much minding its own business, the ancient Romanesque chapel dedicated to Saint Peter, patron saint of fishermen, was entirely restored and decorated by the “prince of poets”, Jean Cocteau, in the late 1950s and has become an outstanding example of the creative fusion between spirituality and art.

There is no archive of the chapel’s beginning, though Villefranche-sur-Mer itself was founded in 1295. In his diary, Le Passé Défini (The Defined Past), Jean Cocteau wrote that the renovation of the church started on 5th June 1956 with its inauguration on 1st August 1957, though plans for the restoration were always on his mind as far back as the twenties and thirties during the years he lived at the Welcome Hotel on the seafront. 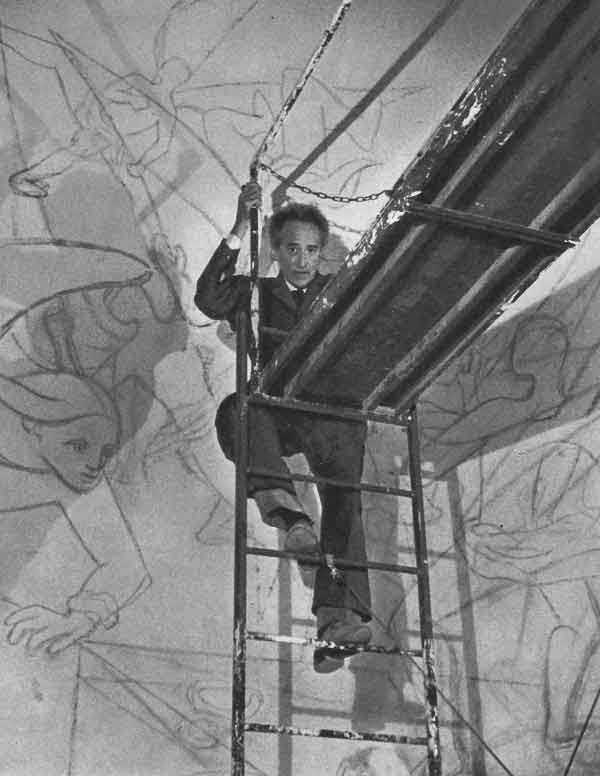 Indeed, rather than being a creative refurbishment of a dilapidated and disused place of worship, Chapelle Saint-Pierre became the manifestation of an artistic vision, embodying in paint and masonry the dreams of a man inspired by the calling of the divine.

In Menton there are several Cocteau sites, including the Marriage Hall (salle de marriage), the new Cocteau museum and an older smaller Cocteau museum, the Bastion.

Beauty cannot be recognised with a cursory glance.
—Jean Cocteau

16 Comments on “The house where Jean lived”