It’s rare that one of our trips to Paris doesn’t include a trip to Musée d’Orsay. This one was no exception, particularly as there were exhibitions on Catalan architect Gaudí, Whistler’s painting from the Frick and artist turned sculpture Aristide Maillol. 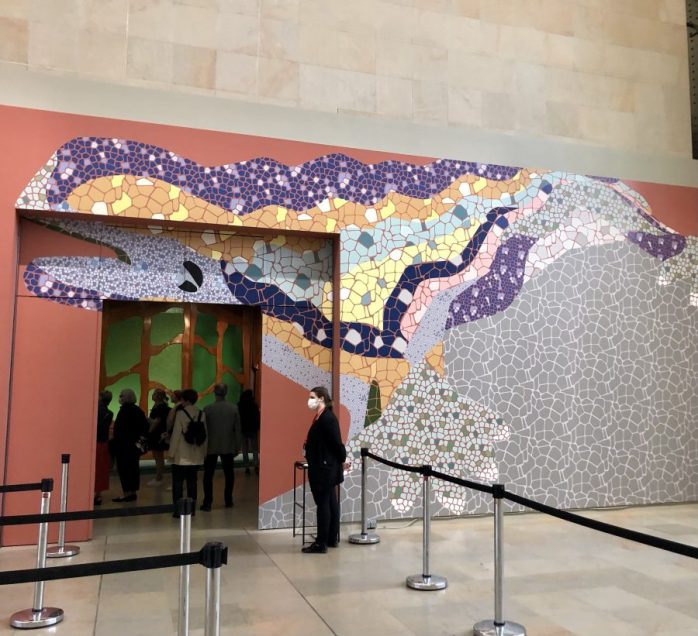 Antoni Gaudí (1852-1926), architect and ingenious creator, made his mark on Spain at the turn of 20th century and still continues to fascinate. For the first time in 50 years, a large-scale exhibition in France is devoted to this master of Art Nouveau. The exhibition shows the remarkable depth of creativity of this singular artist: from his wonderful furniture to the Sagrada Familia in Barcelona.

The Musée d’Orsay is hosting an immersive experience which offers a new perspective of the artist as an architectural genius who practiced in a Catalonia in the midst of social, political and urban upheaval.

The exhibition focuses on showing the architect’s creative process at a time of exceptional local artistic profusion linked to “Modernism” or the Art Nouveau movement in Spain. Gaudí’s workshop, his many collaborators, and his sophisticated working techniques are fully explored in the exhibition to articulate his extraordinary inventive capacity.

Through the few surviving drawings of the artist, models and many works of furniture, the exhibition reconstructs what characterises Gaudí’s work: namely space and colour. You are lead through his various creations: palaces, urban hotels, parks and churches, including  the Sagrada Familia. Films, photographs and documents  testify to the vitality of the architect’s career but also to the artistic upheaval he forever imposed on Barcelona.

At the same time we were able to see James McNeill Whistler ‘s (1834-1903), Masterpieces from the Frick Collection, New York.

The Frick Collection – one of my favourite museums –  opened to the public in 1935 in the New York mansion of industrial magnate and major collector Henry Clay Frick (1849-1919), is one of the most important museums of European art in the United States.

With the closure of the institution for renovations, an important group of works by the American painter James Abbott McNeill Whistler (1834-1903) have left New York for the first time in more than a century to be presented at the Musée d’Orsay. This exceptional exhibition brings together 22 works, including 4 paintings, 3 pastels and 12 etchings from the Frick Collection which are joined by 3 paintings from the Musée’s own collection.

Born in 1834 in Massachusetts, Whistler apprenticed and began his career in Paris between 1855 and 1859. After settling in London, the artist maintained a close connection with the Parisian art scene, exhibiting alongside the artists at the Salon des Refusés (Exhibition of Rejects), in 1863, and became one of the “beacons” of the new Symbolist generation in the 1890s.

In 1891, the French State bought his masterpiece: Arrangement en gris et noir : portrait de la mère de l’artiste [Arrangement in Grey and Black No. 1: Portrait of the Artist’s Mother]. Around the same time, Henry Clay Frick built his collection, and in the early 1910s, opened it to the art of the late 19th century. He purchased eighteen works by Whistler – paintings and graphic arts – making this artist one of the best represented in his collection.

The Musée d’Orsay has showcased three large portraits representative of his famous “symphonies in white” and “arrangements in black”: the portrait de Mrs Frederick Leyland (a masterpiece of the Aesthetic Movement), the portrait de Rosa Corder and finally the portrait of the extravagant aesthete Robert de Montesquiou-Fezensac. This portrait, one of the last painted by Whistler, is probably the most modern work in the Frick’s collection.

This is the first major retrospective of Aristide Maillol (1861 – 1944) since the centenary one in 1961 at the Musée National d’Art Moderne. Despite the timelessness of his work, Maillol played a crucial role in the early 20th century, during the birth of modernity.

Initially a painter, he then turned his attention to tapestry and decorative arts, only discovering his forte, sculpture, later on in life, around 1895.  Initially he sculpted using wood and on a small scale. But, as he was recognised by his peers, a network developed which was to be important throughout his career.

A meeting with Count Kessler proved decisive who commissioned a number of works from Maillol which now reside in the Oskar Reinhart Foundation, Winterthur. Maillol introduced a new classicism and rendered female bodies, with their robust and sensual anatomy, in simple geometric forms. In particular, he moves with ease from the sketch to the monumental, in a continuous back and forth. The impressive Monument à Cézanne [Monument to Cézanne] forms the centrepiece of a section that invites one to dive into his creative process.

Of course, one of the joys of this museum is the depth of its Impressionist collection which we love to revisit.