One from the vaults: Things my beloved does – loses stuff, lots of it

We’ve just returned from back-to back vacations where my beloved managed to lose not one but two pairs of expensive sun glasses. Annoyingly, the second pair was mine! The first pair, which I’d bought him a couple of years ago in Alassio, went MIA after our trip to Washington DC. The second pair was lost somewhere in Catalonia. In both cases, the glasses were lost in their cases. 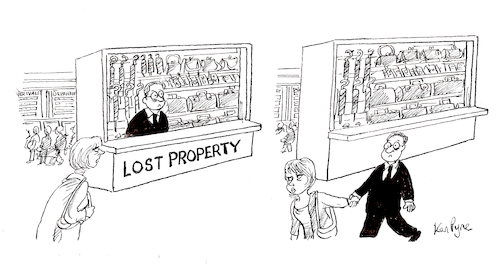 To be honest this subject is worthy of its own blog, only because in our 40 odd years of marriage he’s lost so many things. I’m fond of saying:

I’d be a wealthy women if I had a Euro for everything my beloved has lost.

In reality, I’d be even wealthy as I’d have saved the cost of the replacements too. Of course, we all lose or more generally misplace things from time to time. No one’s perfect, even me. But I’ve yet to meet anyone, other than my beloved, who loses or temporarily misplaces something most days. My late mother used to say my beloved could lose anything not surgically attached to him. And that pretty much sums him up.

Now I should clarify what I mean by lost. I mean things that are irrevocably lost, not things he’s temporarily misplaced (again) or left somewhere where he regularly visits. I can’t tell you how many telephone calls I’ve had from hotels or family and friends over the years letting me know they’ve found my husband’s toilet bag, shoes, jacket, jumper, mobile phone, wallet, keys and so on and will keep it until his next visit or will send it on.

Similarly, I’ve – yes, it’s usually me – had to ring countless places enquiring if, when they his cleaned room, they have  found something my beloved might have left behind. At this point, I should add that it’s invariably something relatively new and inevitably expensive. The type of loss that might be the subject of an insurance claim but probably won’t be because he can’t remember when or even where he lost it.

You may be wondering how he manages to leave stuff behind in hotel rooms. Doesn’t he check everywhere before he leaves? The answer to that is, no, he doesn’t. Additionally, he invariably gets absolutely everything out of his case and populates the entire room with his stuff, rather than confining it to the wardrobe and a couple of drawers. I’ve even tried to make it easier by sending him off with say four of everything so he can check when he re-packs. However, he just stuffs everything, clean or dirty, back into the suitcase. When we travel together, I check everywhere in the room before we leave, particularly the top shelf of the wardrobe where he often lobs his dirty stuff.

He’s also lost or misplaced his passport on numerous occasions yet I’ve still managed to get him either in or out of the country he’s been visiting – I’ve explained how in other posts. And, there we have it in a nutshell. My beloved rarely has to cope with the consequences of his actions, or lack thereof. He can rely on me to smooth out all the bumps while he sails serenely onwards and upwards. I suspect it’s all part of his “just in time” management. My beloved likes to leave everything until absolutely the very last minute. I can never get him to do anything unless he deems it to be both urgent and important for him. Yes, we’re total opposites in that respect.

Because my beloved loses or misplaces something most days, I have a raft of stories some of which I’ve already shared and some which I’ll share with you over the coming years. Yes, he’s lost a lot of stuff!

36 Comments on “One from the vaults: Things my beloved does – loses stuff, lots of it”