Postcard from Washington DC: Part I

With time at a premium in Washington, aside from visiting the Library of Congress, we just generally walked around the city looking at all its monuments, parks and civic splendours, roughly following a walking map I found online (below).

Washington DC, the US capital, is an interesting albeit compact city. Its museums, important buildings and memorials are all set in parkland on the banks of the Potomac River. Consequently, it’s easy to walk around. It’s what you might call a planned city, designed as the seat of government over 200 years ago. Its core is the triangle created by the US Capitol, the White House and The Mall, known as Federal Triangle. 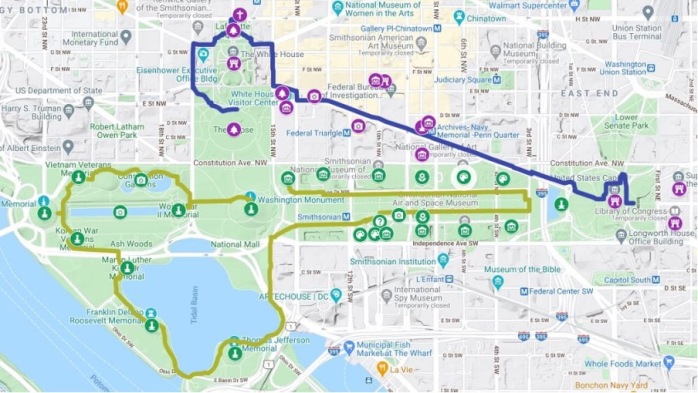 Memorial Parks and the National Mall

The memorials are listed below roughly in the order we found them as we walked in a counter-clockwise direction. The loop from the Washington Monument to all the memorials is only about 5km (3 miles). The distance around the rectangle called “The Mall” between the Washington Monument and the US Capitol is a similar distance. Many of the Smithsonian Museums are on The Mall along with the National Gallery of Art. 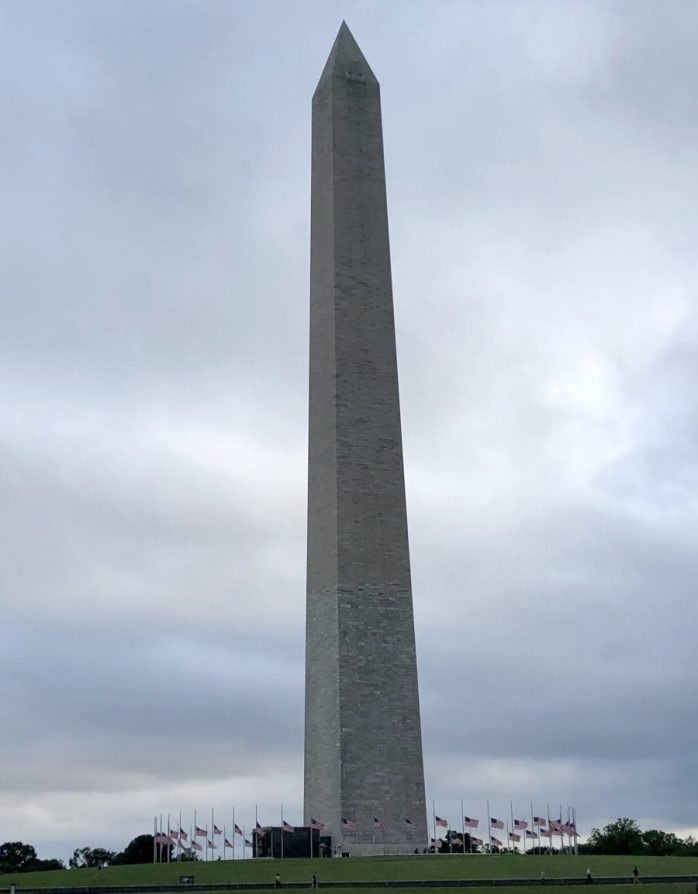 The Washington Monument stands  170 metres (555 feet) tall and is our perfect first stop to get an overall view of the area. The original steam powered elevator took 10-12 minutes to reach the top. I consider that a much better option than climbing the 896 steps to the top. The monument’s stones are two different colours illustrating he two phases of construction. When completed in 1884, it was the tallest building in the world. 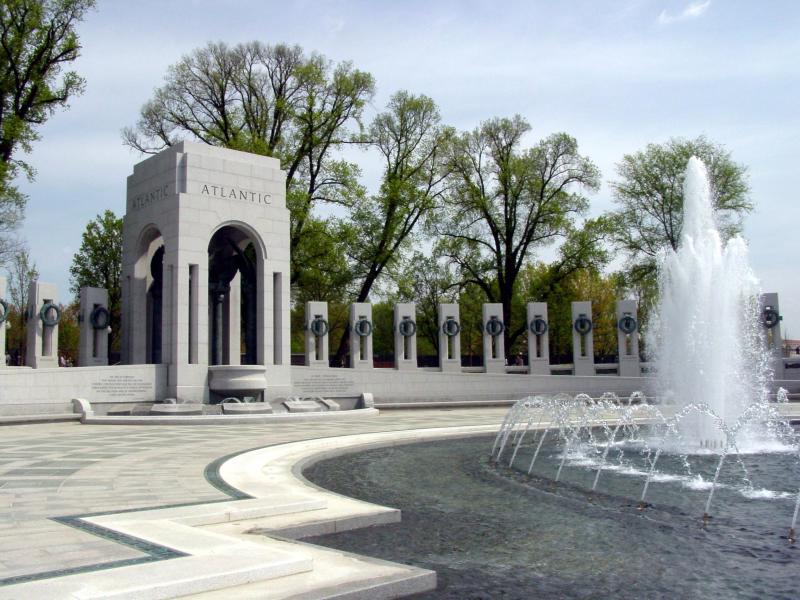 Dedicated in 2004, the stunning memorial is made of white marble. It honours the sacrifices of both the American people at home, supporting the war effort, and the 16 million who served overseas.  The Freedom Wall’s gold stars commemorate the more than 400,000 Americans who gave their lives in the war.

On the west side of the memorial is the Freedom Wall of 4,048 gold stars. Each star represents 100 Americans who died in the war. Under each of the Pacific and Atlantic pavilions four eagles carry an oak laurel wreath. Between the pavilions are 56 pillars, one for each US state and territory. 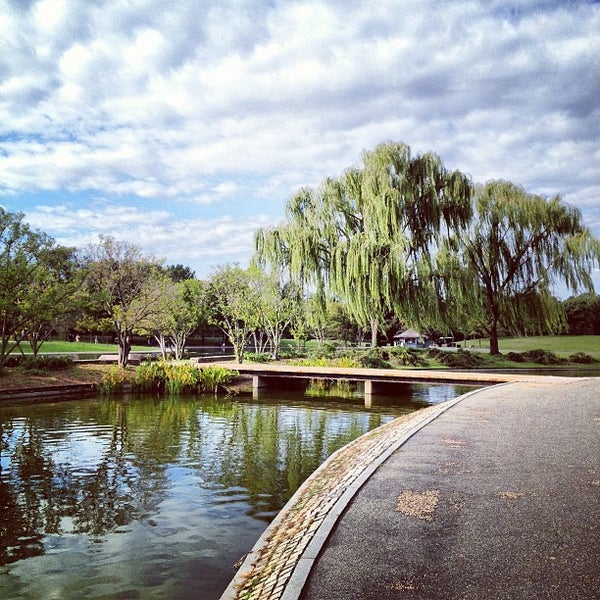 The lake in Constitution Gardens is about the size of 6 US football fields. This 50-acre garden and lake, a bicentennial project, commemorates American independence.  A monument, on the island in the middle of the lake, honors the 56 signatories of the American Constitution. Military headquarters buildings occupied this spot until the 1970s.

Two black-granite walls, each about 76 metres (250 ft) long, form a “V”. The names of the more than 58,000 men and women who gave their lives or remain missing are etched into the walls in the order they died or disappeared. The walls point to the Lincoln Memorial and the Washington Monument. This sombre subtle memorial was dedicated in November 1982. 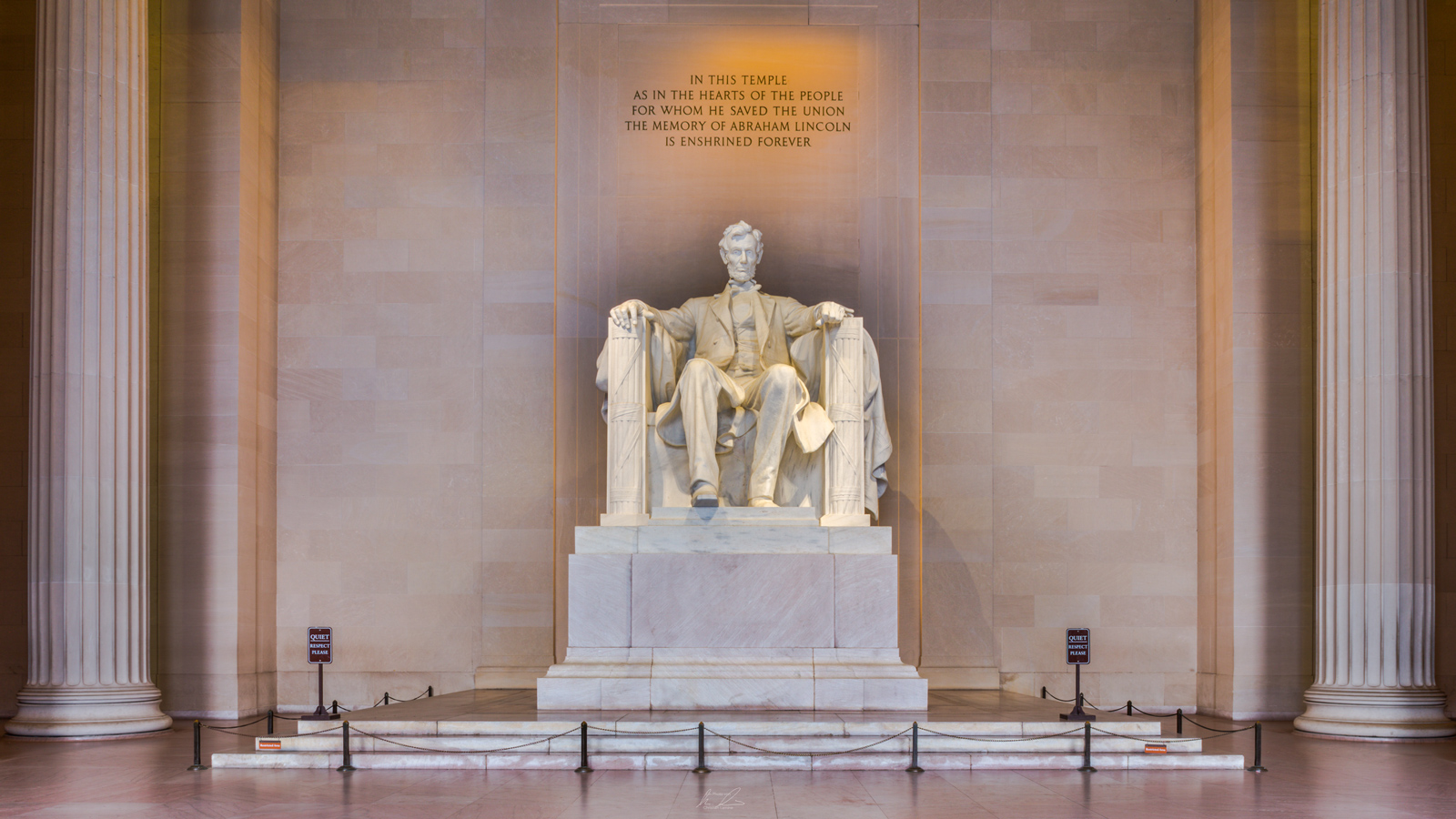 Dedicated in 1922, this memorial to the 16th US President is housed in huge Greek temple. Each of its 38 columns is 13 metres (44 ft) tall and 2 metres (7.5 ft) across. Inside the memorial is the above statue of Abraham Lincoln. His famous Civil War Gettysburg Address and his second inaugural speech are engraved on the north and south walls. While there’s an engraving on the monument’s steps noting the spot where Martin Luther King Jr. delivered his “I Have a Dream” speech in 1963 overlooking the reflecting pool. 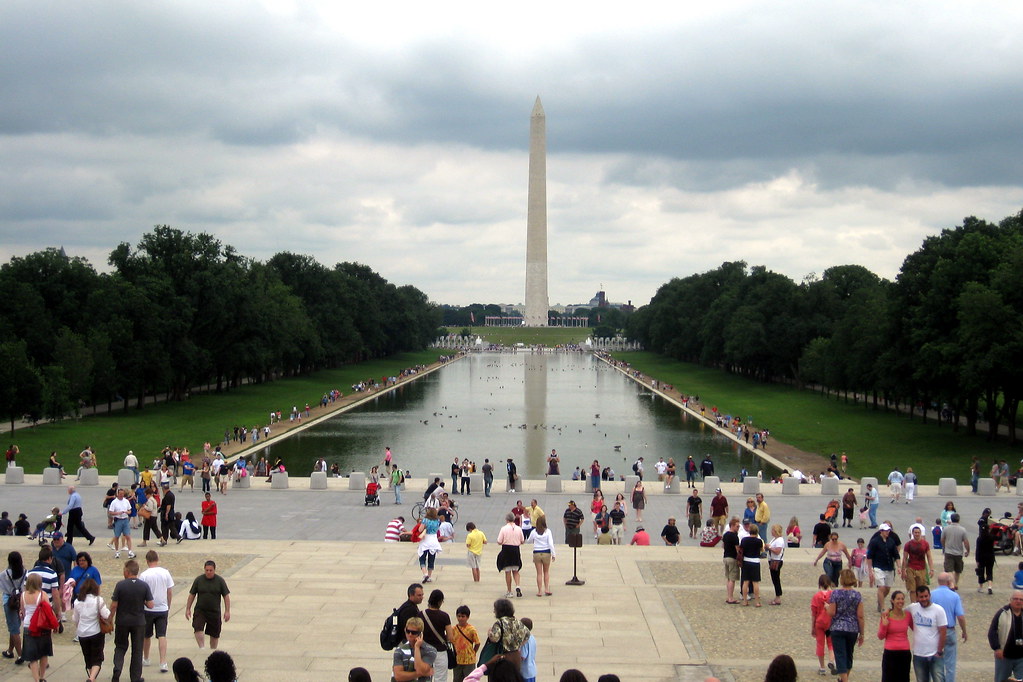 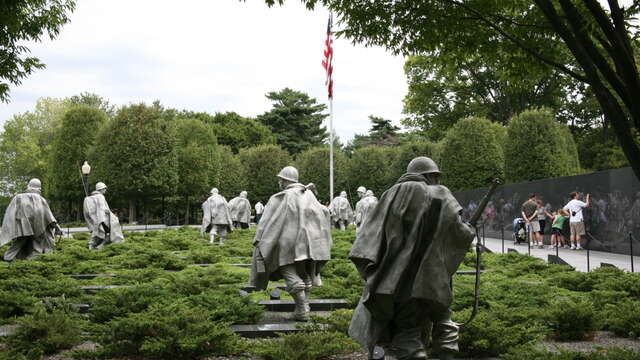 Dedicated in 1995, the memorial commemorates the sacrifices of 5.8 million American service members during the Korean War (1950 to 1953). On the walkway between the mural wall and the advancing soldiers are markers listing the 22 nations who provided troops to the United Nations efforts. There are nineteen stainless steel foot soldiers, in full battle gear. They advance through Juniper bushes separated by granite strips representing the rice paddies of Korea. The figures showcase both the various branches of the armed forces and the ethnic cross section of America. The reflective wall beside the statues is 50 metres (164 ft) long. The etchings on the wall are from hundreds of photos from the war. 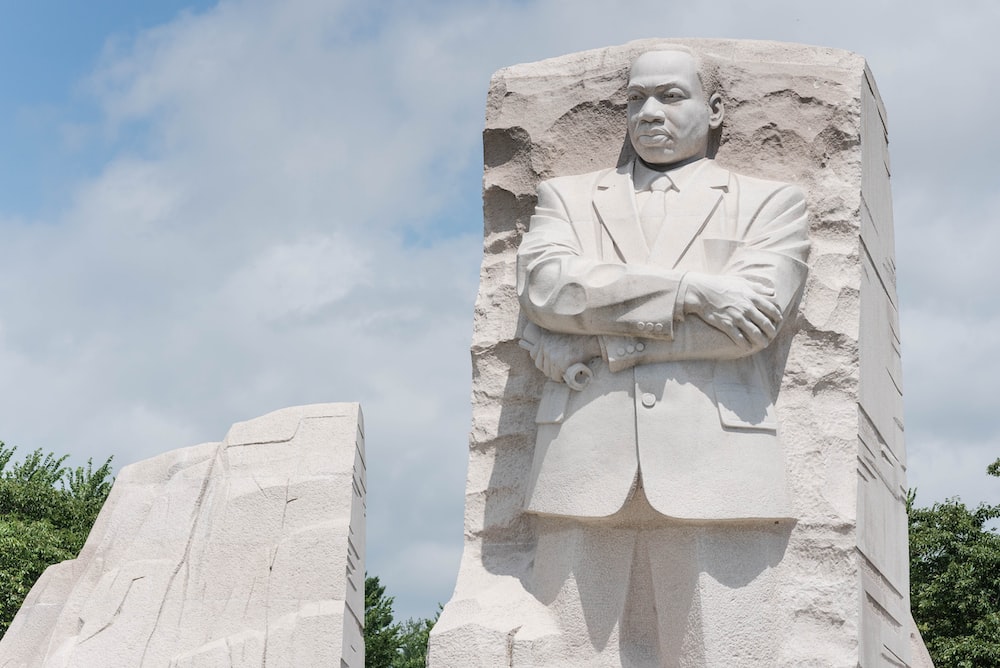 Two blocks of granite called the Mountain of Despair flank a 9 metre (30 ft) tall sculpture of MLK whose quotes are inscribed on the walls around the memorial. It was dedicated in 2011, the 48th anniversary of the August 1963 “March on Washington for Jobs and Freedom”. 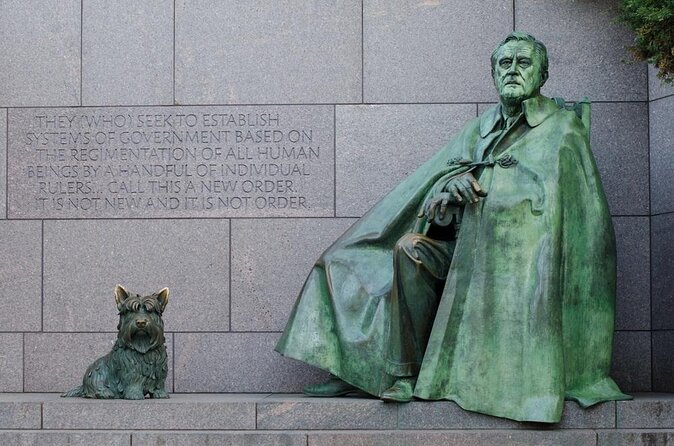 This is a unique memorial to the longest-serving (four-terms) US president (1933 to 1945). The two-term limit for US Presidents became law shortly after his death. 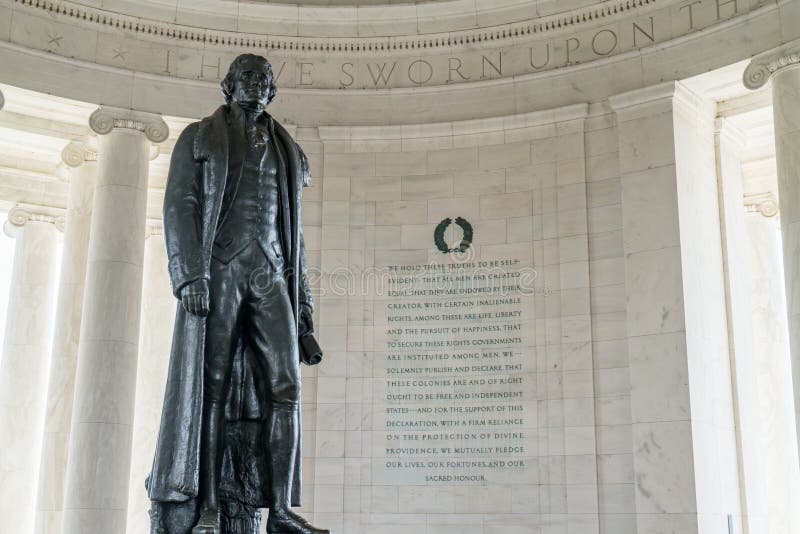 You cannot miss the statue of General Ulysses S Grant on his war horse at the east end of The Mall.  Dedicated in 1922, the memorial honours the Civil War general and 18th US president.

40 Comments on “Postcard from Washington DC: Part I”