A dear friend advised me to visit the Library of Congress. I’ve always loved libraries with their stacks of books, hushed atmosphere and more. This is truly a magnificent place to dally particularly amongst its architectural splendour.

The Library of Congress, housed in three buildings on Capitol Hill in Washington DC, is the US Congress’ research library and the country’s national library. It’s also the largest library in the world, with a collection of more than 170 million items. It’s massive and really has to be seen to be believed.

Its story began in 1800, when President John Adams approved a congressional act that moved the national capital from Philadelphia to Washington DC. As part of that bill, a sum of US$5,000 was earmarked for books intended for use by Congress. Under Adams’ immediate successor, Thomas Jefferson, Congress passed another law under which the US president appointed someone to the official post of “Librarian of Congress.” Jefferson named the first two librarians, who each did double duty as clerk for the House of Representatives. (The two positions were separated in 1815.)

Jefferson’s contributions to the Library of Congress didn’t stop there: In August 1814, during the War of 1812, British forces burned the Capitol, destroying the small congressional library. The following year, Congress purchased Jefferson’s extensive personal library (including some 6,487 books) for some US$23,950, which became the foundation of the new Library of Congress collection.

Unfortunately, another fire in 1850 (this time accidental) destroyed some 35,000 volumes, including almost two-thirds of Jefferson’s original contribution.

Until the Civil War, the Library of Congress just served Congress. But post-war, the influential Librarian of Congress Ainsworth Rand Spofford (who served in the post from 1864 to 1897) convinced Congress that it was also in effect the nation’s library, and should be used by the public as well as by Congress.

Spofford also played a leading role in promoting the copyright law of 1870, which centralized all US copyright registration and deposit activities (including the U.S. Copyright Office itself) in the Library of Congress.

As its collections grew steadily under Spofford’s watch, Congress approved the construction of a separate building for the Library of Congress. The Italian Renaissance-style structure opened in 1897, nearly a century after the library’s founding.

In the early 20th century, the Library of Congress took another great leap forward thanks to the support of President Theodore Roosevelt, who in 1903 issued an executive order transferring the records of the Continental Congress and the personal papers of six founding fathers (George Washington, Alexander Hamilton, Benjamin Franklin, James Madison and James Monroe) to the library from the State Department.

A new Art-Deco style annex building opened in 1939 to hold the library’s ever-growing collections. The latter half of the 20th century saw the Library of Congress build its collections at an unprecedented rate, largely driven by the impact of automation on its cataloging procedures and its expansion into overseas acquisitions.

A third major building, named for James Madison, opened in 1980, doubling the library’s size. Its two older buildings were renamed that same year – the original 1897 structure for Thomas Jefferson and the 1939 annex building for John Adams – and both underwent extensive restorations and modernisations in the 1980s and ‘90s.

With the dawn of the Internet, the Library of Congress website and its National Digital Library Program (both launched in 1994) created an increasingly valuable online research destination, including a high-quality electronic catalogue of historical documents and other research materials.

By 2012, the library’s American Memory website had grown to include some 37.6 million primary source materials (including manuscripts, photographs, films and audio recordings).

By 2016, when Carla Hayden was sworn in as the first woman and first African American to become librarian of Congress, the library had more than 3,000 people on staff and more than 38 million books and 70 million manuscripts in its catalogue.

According to its website, the Library of Congress receives approximately 15,000 items, and adds about 12,000 items to its catalogue each day. Most of these come in through the copyright registration process; others through gifts, purchases and exchange with libraries in the United States as well as abroad.

Our visit coincided with a number of fascinating exhibitions, many photographic ones, including one on Rosa Parks. I knew the name, of course, but the exhibition cast her in a previously unseen light. 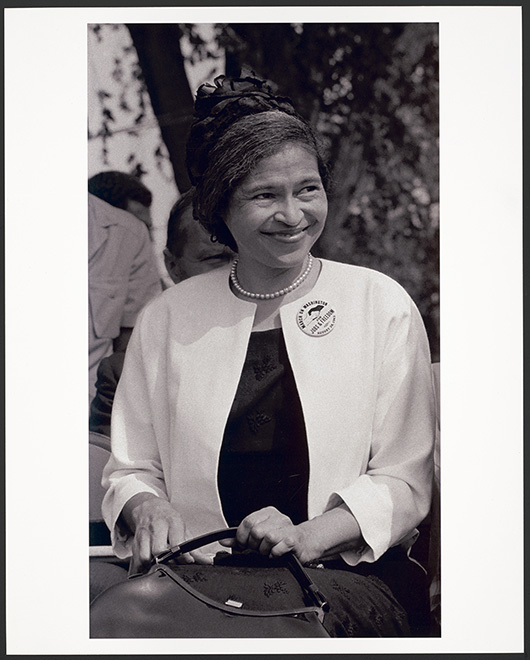 Rosa Parks (1913–2005) is best known for her refusal to give up her seat to a white man on a crowded bus in Montgomery, Alabama, in December 1955. She became an icon of the movement, celebrated for this single courageous act of civil disobedience, but she is often characterised by misconceptions. Contrary to popular belief, Parks was not a demure seamstress who chose not to stand because she was physically tired. Her calm demeanor hid a militant spirit forged over decades.

The real Rosa Parks was a seasoned activist. She was punished for the bus incident with death threats, unemployment, and dire poverty, yet was sustained through years of hardship by her strong Christian faith. Parks remained committed to the struggle for social justice and human rights until her death, inspiring millions.

Rosa Parks: In Her Own Words showcases rarely seen materials that offer an intimate view, documenting her life and activism.The materials are drawn extensively from the Rosa Parks Collection, a gift to the Library of Congress from the Howard G. Buffett Foundation.

If you’re ever in Washington DC, this is the place to visit!