Three nights in Montpellier on the way to Catalunya, and three nights on the way back in Uzès. We’d previously stayed in Uzès ahead of watching the 2017 Vuelta a Espana start in nearby Nîmes. I never got to visit its Haribo factory last time, so I had unfinished business here. 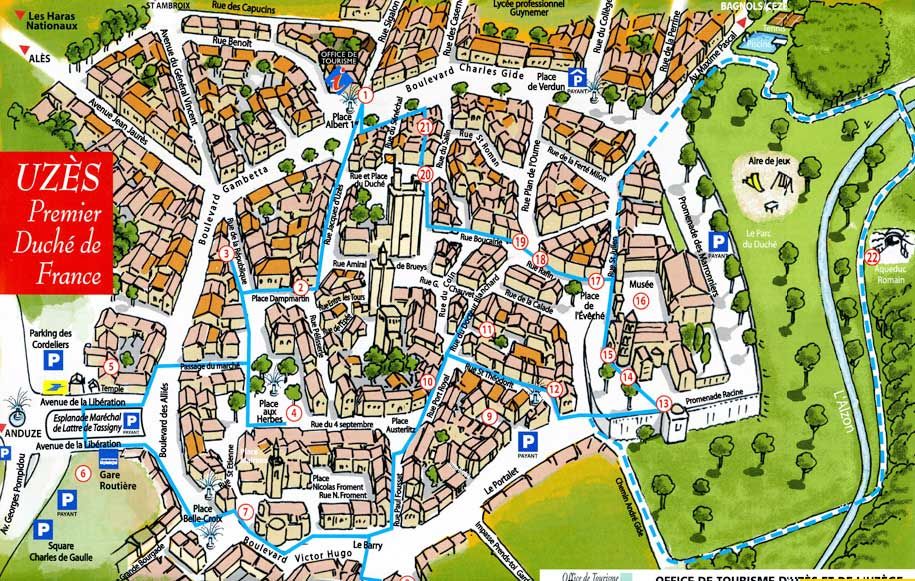 The town is about 25km (16 miles) north of Nîmes and 40km (25 miles) west of Avignon. Uzès lies on the eastern edge of Occitanie, close to Provence culturally as well as geographically.

As you can see from the map above, orientation in Uzès is simple: a roughly circular road rings most of its medieval heart. The road’s name varies, but it’s always easy to recognise since it functions as a main road. A shady strip called the Esplanade makes a spur off the ring, serving as an outdoor bus station and also the scene of summer food stalls. Crossing through the ring road, where it intersects the spur, is the Place aux Herbes, the the town’s hub.

Last time we stayed on the outskirts of Uzès, not this time. We stayed at a charming historic, 17th century, town-centre hotel and spent our days pottering around its delightful narrow, cobbled walkways lined with honey-stoned houses, interesting shops, bars and restaurants..

Uzès began as a Roman settlement near the Fontaine d’Eure, the source of the Alzon river and the start of the aqueduct to Nîmes. In the fifth century, it became the regional bishopric, dispensing justice and minting money. From 725-753, it was also the northernmost outpost of Muslim Spain. With a relatively tolerant outlook, Uzès hosted communities of Jews and Cathars. In 1229 it joined France along with the rest of Languedoc. When the Industrial Revolution and silkworm disease brought the local textile industry to an end, the region began producing ceramics and licorice instead. (Hence the Haribo factory just outside town.)

Splendour and majesty seem to me to be key words for this town. Walking through its streets is like taking a walk through a history book. The narrow cobbled streets are lined with large wooden doors – you know how I love doors! –  behind which secret courtyards give onto wide stone staircases and mosaic covered ceilings. As a bishopric from 5th century, a viscountcy and then a duchy in 6th century, the powers of religion, politics and royalty expressed their wealth and influence by building fine mansions, churches, a castle and, a particularity of Uzès: towers. La tour du Roi, la tour de l’Évèque, la tour Bermonde and la tour Fenestrelle each compete with one other for dominance of the Uzès skyline: each unique and each expressing the authority of the powers they represent.

The cathedral is a fine example of these fluctuating forces as it has been pulled down and re-built three times with only the distinctive bell tower — la tour Fenestrelle, surviving the destruction. With its sober neo-roman facade, the cathedral is renowned for its interior walls which were entirely painted with frescoes, parts of which can still be seen today. It also has a unique wrought iron balustrade gallery built in 17th century after protestant-ism was banned and the forced converts to Catholicism had to be seen and counted when they came to church.

Historically, the wealth of Uzès was built on the working of wood, wrought iron, stone, textiles and, later, silk – Uzès stockings became widely popular after the war when they were in short supply. Nowadays, the city is a vibrant and active place to be with numerous festivities and activities. Perhaps the best known is the Saturday market which is held in the attractive Place des Herbes in the town centre.

The present-day city retains the trace of its walls as a circuit of boulevards. A Capuchin chapel, built in 1635 to house the mortal remains of the dukes, occupies the site of a 1st century AD temple dedicated to the first Roman Emperor, Augustus. There are monuments of the prestige of the former bishopric, once one of the most extensive of Languedoc, but extinguished at the Revolution, and private houses that witness the wealth that the textile trade brought in 16th century.

There is plenty to do in Uzès, too. I loved the medieval garden, a modern recreation from 1995 situated in the walled precincts of a 12th century ruin. The garden is divided into a herbarium (a medicinal garden), a hortus (vegetable garden) and a little corner filled with toxic plants that were used as purgatives or as the raw materials for witchcraft. After your stroll through the garden, you can climb the 100 steps of the Tour du Roi to admire a panoramic view of the town and region.

We also visited the local art museum which had a little bit of everything within its historic walls.

19 Comments on “Postcard from Uzès”