For the next few weeks I’m going to be covering – in no particular order – the places I visited on my most recent trip to London and Paris.

The Fondation Cartier was created in 1984 by the Cartier SA firm as a centre for contemporary art, presenting exhibits by established artists and offering young artists a chance to debut their works. It moved to its current location in a glass building designed by Pritzker Prize architect Jean Nouvel in 1994 where it’s surrounded by a modern woodland garden landscaped by Lothar Baumgarten.

Having enjoyed a great deal of native Aboriginal Art in Australia, I was keen to see the first major solo exhibition of Aboriginal artist Mirdidingkingathi Juwarnda Sally Gabori, outside Australia.

Considered one of the greatest contemporary Australian artists of the past two decades, Sally Gabori began painting in 2005, around the age of 80, and rapidly achieved national and international renown as an artist. In just a few short years of a rare creative intensity, and prior to her death in 2015, she developed a unique, vibrantly colourful body of work with no apparent ties to other aesthetic currents, particularly within contemporary Aboriginal painting. Bringing together some thirty monumental paintings, this exhibition was organised in close collaboration with the artist’s family.

The incomparable Sally Gabori was a distinguished senior Kaiadilit woman and a contemporary artist of considerable sophistication whose short yet incredible career left an astonishing cultural legacy. Her signature expressive brushstrokes and vivid use of colour brilliantly portray places on Bentinck Island of deep personal significance to the artist including Dibirdibi, her husband’s Country and the places associated with the Dibirdibi creation story, her father’s Country, Thundi (or Thunduyi), her own Country, Mirdidingki, and the first outstation on Bentinick Island, Nyinyilki.

While abstract in nature, Gabori’s depictions of Country retain representational elements which map the landscapes of Bentinck Islands, and Gabori’s own identity, across her monumental canvases. Her indefatigable zeal to communicate her stories, knowledge, and experiences through her painterly interpretations of her Country won her great admiration both nationally and internationally and impart a real and intimate sense of who Gabori was and where she was from.

Gabori and her family lived on Bentinck Island in accordance with Kaiadilt custom, with minimal interaction or influences from European settlers, until the entire Kaiadilt population migrated to Mornington Island in 1948 following a series of environmental disasters. In the 1980s the Kaiadilt people began to re-establish themselves on their ancestral lands on Bentinck Island, however the Mornington Island community of Gununa remained the major resource centre for Gabori and her contemporaries.

Following her passing in 2015, Gabori’s tremendous legacy and immense oeuvre were honoured in a major retrospective exhibition Mirdidingkingathi Juwarnda Sally Gabori: Dulka Warngiid – Land of All at the Queensland Art Gallery | Gallery of Modern Art in Brisbane and at the National Gallery of Victoria in Melbourne. Gabori’s work features in important collections and major institutions in Australia and abroad.

Though Aboriginal art is only one of many Indigenous Australian art traditions, it has remained one of the most recognisable art forms across the globe ever since it first burst onto the world stage in the 1970s. This tradition, which includes art by Aboriginal Australian and Torres Strait Islanders, covers a wide range of media, including leaf and bark painting, wood carving, rock carving, rock painting (or pictographs), watercolours, sculpting, textiles, string figures and sand art. Known for its bold patterns, vibrant colours, distinctive dot patterning, and strong symbolism, many experts believe it to be the oldest continuous art tradition in the world.

More recently, Aboriginal art traditions and their popularity among spectators has given rise to internationally renowned 20th and 21st century artists who have pioneered new artistic techniques and visual languages that combine Western and Aboriginal symbolism and sensibility. 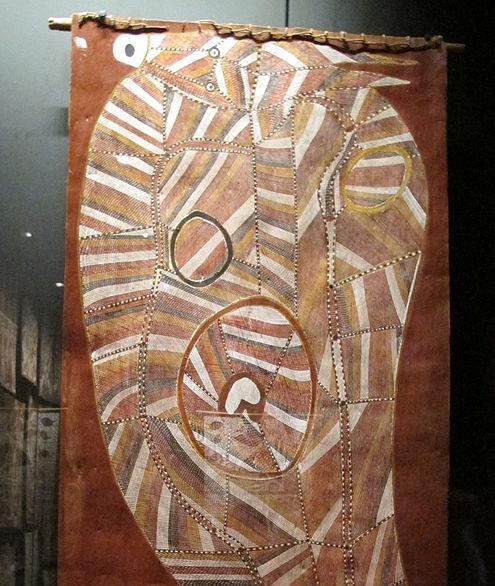 Tied to important oral traditions, Aboriginal art is deeply intertwined with spirituality and culture. Most contemporary Aboriginal art is informed by ancient stories and symbols of Jukurrpa (translated as Dreaming or Dreamtime). The foundation of many Aboriginal beliefs and culture, Dreamtime refers to the creation period, a time when ancestral beings traveled the desert, leaving behind landforms, people and culture. Dreamtime is additionally often thought of as a continuum of the past, present and future, existing outside of temporal reality, that can be accessed through personal experiences which are then recorded through art.

Widely considered the most influential Aboriginal artist, Albert Namatjira (1902–1959) was the first to receive widespread recognition. Integral in developing the Hermannsburg School watercolor technique, Namatjira’s vibrant and otherworldly Australian landscapes were criticised by some as assimilationists, but are now recognized as skillful synergies of Western painting techniques and coded Aboriginal observations of spiritual connection with the land.

The iconic dot painting style was popularized by the Papunya Tula Art Movement in the 1970s. Long used in ritual body art and sand painting, the dot style entered the wider painting world in 1971, when Aboriginal sand artists began mural painting. In response to avid interest, the painters diversified to canvases and boards. Frequently depicting abstract aerial landscapes, these paintings use dots and cross-hatching to create eye-catching patterns that additionally camouflage sacred symbols and stories.

Initially a craftwork artist, Kngwarreye began painting in her eighties. A prolific painter with a constantly evolving style, she produced 8,000 paintings over eight years. The popularity of her work paved the way for a younger generation of Aboriginal artists, though I’m not sure that includes Sally Gabori!

14 Comments on “Trip to Fondation Cartier”