It’s Europe’s largest and busiest museum of modern art with more than seven million visitors a year since it opened in 1977 – though probably not during the pandemic. 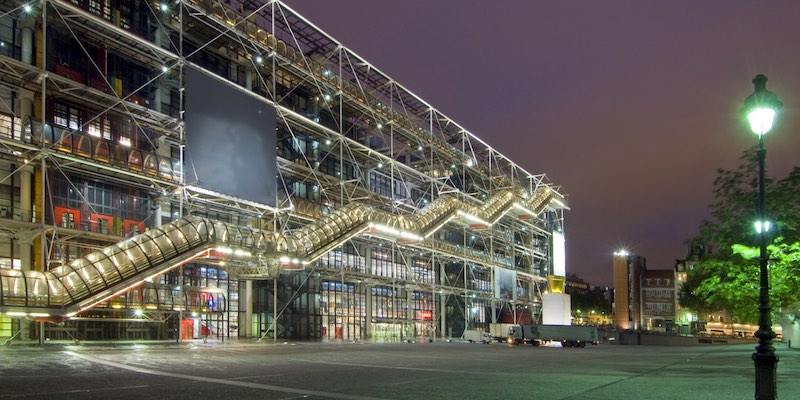 Centre Pompidou is the place to see the works of David Hockney, Picasso, Klee, Philippe Starck, Andy Warhol and other great modern artists. In busy Place Georges Pompidou just outside the museum, there are always street artists, mimes, jugglers, budding artists and musicians. Plus the famous Stravinsky Fountain, a whimsical water-spraying sculpture inspired by the musical works of Igor Stravinsky.

Georges Pompidou and His Centre 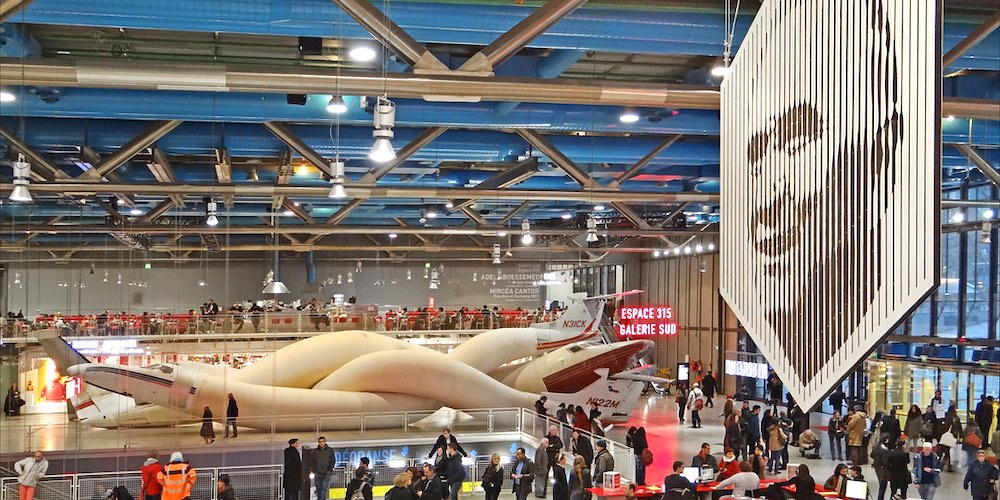 The kings, emperors, and presidents of France have always had a penchant for creating grandiose monuments in Paris as memorials to their period of rule. That’s why Paris has all those grand plazas, gardens, palaces and arches. The man who was both prime minister and president of France from 1962 to 1974 was no exception to this royal way of thinking.

The Pompidou Centre was the brainchild of French President Georges Pompidou who envisioned a modern arts and cultural museum in the heart of Paris. Its unusual design with the radical “plumbing on the outside,” designed by Renzo Piano and Richard Rogers, was controversial when it first opened in 1977. Also controversial was the decision to raze blocks of buildings in the historic heart of the Marais to make room for the museum.

The museum’s construction and design controversies didn’t end with its opening. After only thirty years the building was suffering from mechanical and design flaws. So, in the late 1990s, it was closed for major renovation work that cost at least as much as the original construction.

Situated in a vast Piazza, which draws on the design of a Roman one and forms an integral part of the Centre, it serves as a strong link between the city and the building. The Forum was initially designed to open onto the Piazza, much like a railway station concourse. This design proved impossible to reproduce, but the idea of an open space was conserved by adding a fully transparent glass facade to the Forum.

From the outside, the visual signature of the building is embodied by the huge mechanical escalator, known as the “caterpillar”, designed to serve as a vertical outdoor path. It is the primary artery of the Centre Pompidou, serving all levels and transporting the public upwards. Its transparency provides one of the finest views of Paris, and as you travel up, it seems as though you are still strolling through the city. However, if like me you don’t like heights, you keep your eyes firmly shut!

Inside, 6 levels provide fully modular plateaux of 7,000 sq m (70,000 sq ft) each designed to meet the requirements of a variety of activities and projects. The building embodies a radical vision in which spaces are no longer defined by their role.

In order to provide flexible use and adaptable volumes, all the building’s services (ventilation, electricity and water), lifts and escalators were located on the outside of the building and identified by a colour code. Nothing is concealed, all the inner workings are visible from the outside. As for the framework, it was designed to resemble a huge construction toy. Features are repeated, interlocked and fitted together, to form a regular metal fully exposed mechanism – giant Mecanno, if you will. Initially nick-named “Notre Dame of the Pipes” by its critics, the Centre Pompidou has become one of the city’s most photographed monuments, imposing its airiness and elegance in the Parisian landscape.

The presentation of the Musée national d’art moderne collection now covers all of levels 4 and 5. Level 6 houses three areas devoted to temporary exhibitions. The Forum has been redesigned to create a more intuitive welcome area. The first basement level houses a centre devoted to performance art, debates and audio-visual activities.