The recently re-opened and sensitively-refurbished Richelieu-Louvois site is the historic birthplace of the Bibliothèque Nationale de France (BNF). Located in the heart of the capital, in 17th century this comprised  several important and beautiful buildings, including the Palais Mazarin, the Hôtel Tubeuf and the Galerie Mansart. The library was installed on the site during the first half of 18th century. Today it houses exceptional collections: manuscripts (from the remains of the most ancient writings to the manuscripts of modern writers), prints and photographs, stage music and art, letters and plans and finally the museum of coins, medals and antiques.

The impressive palace was the former residence of Cardinal Mazarin who founded the College des Quatre Nations, which is now known as the Institut de France that is located on the bank of the River Seine opposite The Louvre Museum. 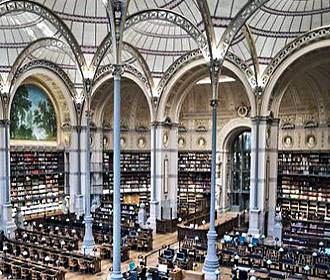 When you look back at the history of the Bibliotheque Nationale de France, or BNF for short, this was originally the royal library.  And when it was realised that manuscripts could not be housed within the Palais du Louvre due to lack of space, they were moved in the 1660s on orders of King Louis XIV, to this former private mansion.

It was opened up to the public in the latter part of the 1600s, and by the end of 17th century the collections had expanded so much that they ended up using he adjacent Palais Mazarin along with the Hotel Tubeuf, the Mansart Gallery and other buildings. And formed in a quadrilateral design, the main royal library was housed here from the first part of 18th century.

The next major stage in the development of the Bibliotheque Richelieu-Louvois was from 1854 through to 1875, when the architect Henri Labrouste, who had already designed the Bibliotheque Saint-Genevieve, was entrusted with creating specific areas for the library.

One of the main projects was the reading room, which is now known as the Labrouste reading room, but he also designed the storage area for books, which was purely dedicated to printed volumes.

Then, from 1875, work continued to enhance and improve the Richelieu library work that continued right up until 1932 with the architects Jean-Louis Pascal and Alfred Recoura working on projects including the famous Oval room.

Further adjustments were also made including filling in courtyards, etc, just purely because the collections were growing exponentially. This work which continued up to and after World War II, were overseen by Michel Roux-Spitz.

Eventually in 1958, a reading room containing the Manuscripts Department was created, and then several other areas were organised and transformed allowing for more storage, yet by the 1970s the collections of the Bibliotheque Richelieu-Louvois were so immense that the library was becoming far too small to accommodate the collection. 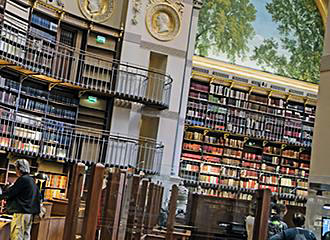 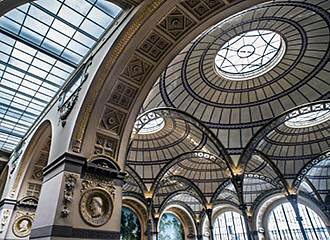 In the 1980s a new project was announced by the French President, Francois Mitterrand to construct a new library that would be one of the most modern, up to date and largest in the world. Once the new library called the Bibliotheque Francois-Mitterrand was completed, the collections at the Richelieu-Louvois library were reorganised and split up into different areas within the two libraries, and this phase of reorganisation was completed in 1997.

However, since 2010, further alterations have taken place so that the collections and the museum are now more readily and easily accessible to the public and researchers.

It’s well worth a visit just to marvel at the building, let alone the various collections.

26 Comments on “Trip to Bibliotheque Richelieu-Louvois”