We hadn’t intended to visit the Petit Palais but found ourselves nearby, decided to go inside and found a bit of a treasure trove.

It’s a listed art museum in the 8th arrondissement of Paris, built for the 1900 Exposition Universelle, which now houses the City of Paris Museum of Fine Arts (Musée des beaux-arts de la ville de Paris). The Petit Palais is located across from the Grand Palais (pictured above, undergoing extensive renovation) on the Avenue Winston-Churchill. The building’s other façades face the Seine river and Avenue des Champs-Élysées. 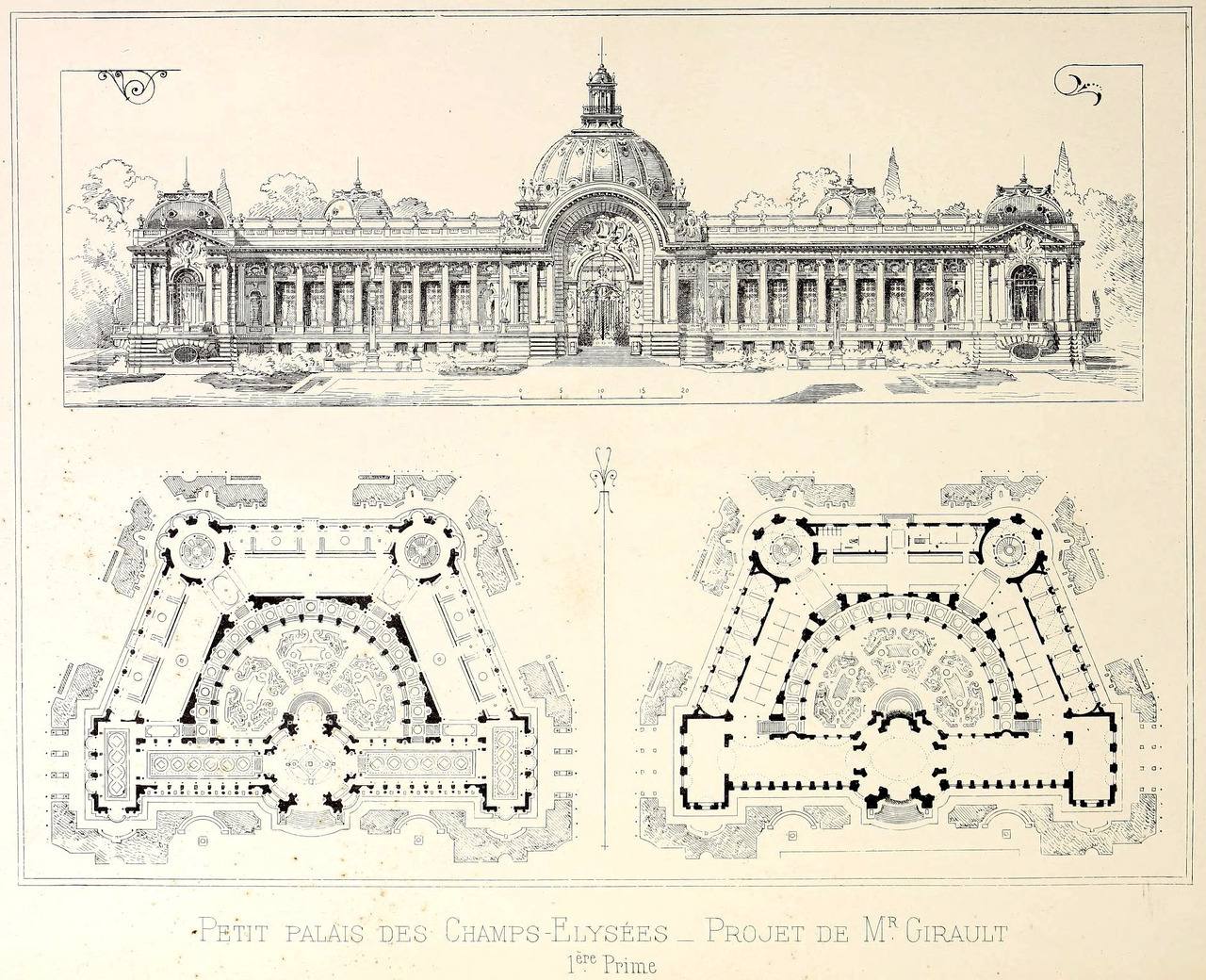 Girault largely drew on the late 17th and early 18th century French style for the Petit Palais. Additionally his work, such as the domed central porch and the triple arcade, has many references to the stables at Chantilly, Oise.

Girault’s plan for the Petit Palais had minimal alterations from design to its execution. The building is a trapezoid shape with its larger side, the main façade, facing the Grand Palais. The building’s shape makes for a semi-circular courtyard at the centre. Its ionic columns, grand porch, and dome echo those of Les Invalides across the river. The tympanum depicting the city of Paris surrounded by muses is the work of sculptor Jean Antoine Injalbert.

The main façade of the building faces the Grand Palais and its focal point is the central entrance archway  – now that’s what I call a door! – set in an archivolt topped by a dome and reached by a broad set of steps.

Two wings flank the main entrance, continuing to the end (corner) pavilions, are embellished with free-standing columns that frame the tall windows.These grand windows provide side lighting for the outer three galleries of the interior museum.

Its interior is split into two levels with two series of rooms running parallel and juxtaposed and was designed to create exhibition spaces. The entrance rotunda and main gallery is especially grand with its mosaic floors and marble-lined walls. The dome and vaults are filled with allegorical paintings.

The exhibits in the Petit Palais are divided into sections: the Dutuit Collection of medieval and Renaissance paintings, drawings and objets d’art; the Tuck Collection of 18th century furniture and the City of Paris collection of paintings. The museum displays paintings by painters such as Rembrandt, Rubens, Nicolas Poussin, Claude Gellée, Fragonard, Hubert Robert, Greuze and a remarkable collection of 19th century painting and sculpture: Ingres, Géricault, Delacroix, Courbet, Monet, Sisley, Pissarro, Cézanne, Danger, Modigliani, Carpeaux, Maillol and Rodin, among others. There is also a relatively small but important collection of ancient Greek and Roman art and of Christian icons for which the museums’s first and only 21st century artwork was acquired in 2019.

Not all the architecture of the 1900 Exhibition was well received however, reactions to the Petit Palais were generally positive. King Leopold II of Belgium was very impressed with Girault’s execution of the building and consequently he was commissioned to build several structures in Brussels, extensions at the Royal Castle of Laeken, and a seafront colonnade at Ostend.