Trip to The Ritz, Paris

We’re slowly but surely working our way around some of the best hotels in Paris. On our most recent trip we ate lunch in the Bar Vendôme of The Ritz in the city’s 1st arrondissement. 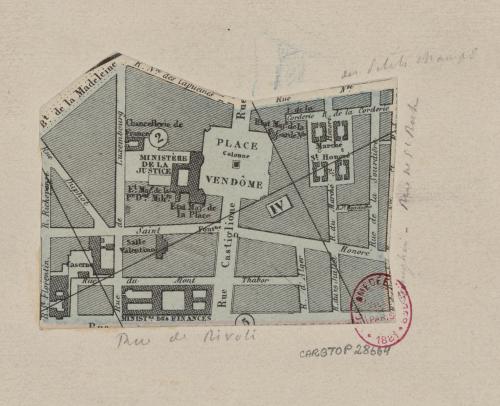 The hotel is in the Place Vendôme which was established by the Marquis de Louvois and abandoned due to a lack of funds. After Louvois’ death the site was bought by King Louis XIV, but finances ran low and the project was bought and completed by economist John Law.

Lot number 15, Place Vendôme site was purchased in 1705 by Antoine Bitaut de Vaillé, advisor to the Grand Council, nominee of Jeanne Baillet de La Cour, widow of Nicolas Baillet de La Cour and acting on behalf of his daughter Anne. Jeanne bequeathed it in 1710 to her daughter, Anne, wife of Duke Antoine de Gramont. Anne, a chambermaid to the first doctor of Louis XIV, Daquin, then to Louis Sanguin, Marquis de Livry, married the Duke Antoine Charles IV of Gramont who left his name to the hôtel particulier Hôtel de Gramont which was built on the site.

In 1721, the Duchesse de Gramont, who had become a widow, sold it to Daniel François de Gelas of Voisin (1686–1762), knight of Amber and count of Lautrec, who lived there for 30 years. It was sold in 1750 to Charles de la Villette, treasurer of the extraordinary wars, who rented it to the Prince of Andorra, Spanish ambassador. From 1775 it belonged to Claude Darras, secretary of the king, and then was occupied from 1788 by the Direction of the liquidation of the public debt and then from 1792 by the Mortgage Credit.

The façade was designed by the royal architect Jules Hardouin Mansart. In 1854 it was acquired by the Péreire brothers, who made it the head office of their Crédit Mobilier financial institution.

In 1888, the Swiss hotelier César Ritz and the French chef Auguste Escoffier opened a restaurant in Baden-Baden, and the two were then invited to London by Richard D’Oyly Carte to become the first manager and chef of the Savoy Hotel, positions they held from 1889 until 1897. The Savoy under Ritz was an immediate success, attracting a distinguished and moneyed clientele, headed by the Prince of Wales.

In 1897, Ritz and Escoffier were both dismissed from the Savoy, when Ritz was implicated in the disappearance of over £3,400 worth of wine and spirits. Before their dismissal, customers at the Savoy had reportedly urged them to open a hotel in Paris.

Aided by Alexandre Marnier-Lapostolle, Ritz purchased the palace and transformed the former Hôtel de Gramont building into a 210-room hotel to provide his rich clientele with “all the refinement that a prince could desire in his own home.” He engaged the architect Charles Mewès to update the original 1705 structure.

Ritz’s innovative standards of hygiene demanded a bathroom for every suite, the maximum possible amount of sunlight, and the minimum of curtains and other hangings. At the same time he furnished the hotel with all the old-fashioned appeal of an English or French gentleman’s house, in order to make clients feel at home.

The hotel opened on 1 June 1898 to a “glittering reception”.Together with the culinary talents of his junior partner Escoffier, Ritz made the hotel synonymous with opulence, service, and fine dining, as embodied in the term “ritzy.” It immediately became fashionable with Parisian socialites, hosting many prestigious personalities over the years. Hemingway (pictured below with Ritz) once said: 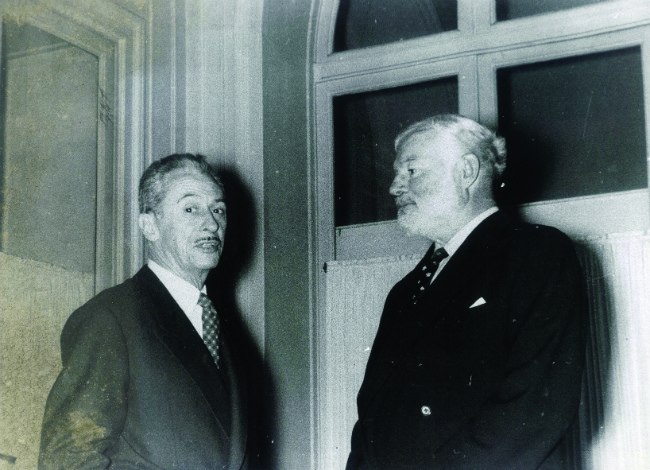 When in Paris the only reason not to stay at the Ritz is if you can’t afford it.

In 1904 and 1908, the Ritz garden café was painted by the Swiss artist, Pierre-Georges Jeanniot. Proust wrote parts of Remembrance of Things Past here from around 1909.

The building was extended in 1910, and César Ritz died in 1918, succeeded by his son, Charles Ritz. Queen Marie of Romania stayed at the Ritz Hotel with her two eldest daughters, Elisabeth (of Greece) and Maria (of Yugoslavia) in 1919 while campaigning for Greater Romania at the Paris Peace Conference. Many other prominent royal figures and heads of state slept and dined at the hotel over the years. Edward VII reportedly once got stuck in a too-narrow bathtub with his lover at the hotel. August Escoffier died in 1935.

During the summer of 1940, the Luftwaffe, the air forces of Nazi Germany during WWII set up their headquarters at the Ritz, with their chief Hermann Göring.

On 22 April 1955, the Duke and Duchess of Parma hosted a coming out ball for their daughter, Princess Cécile Marie of Bourbon-Parma, at the hotel. 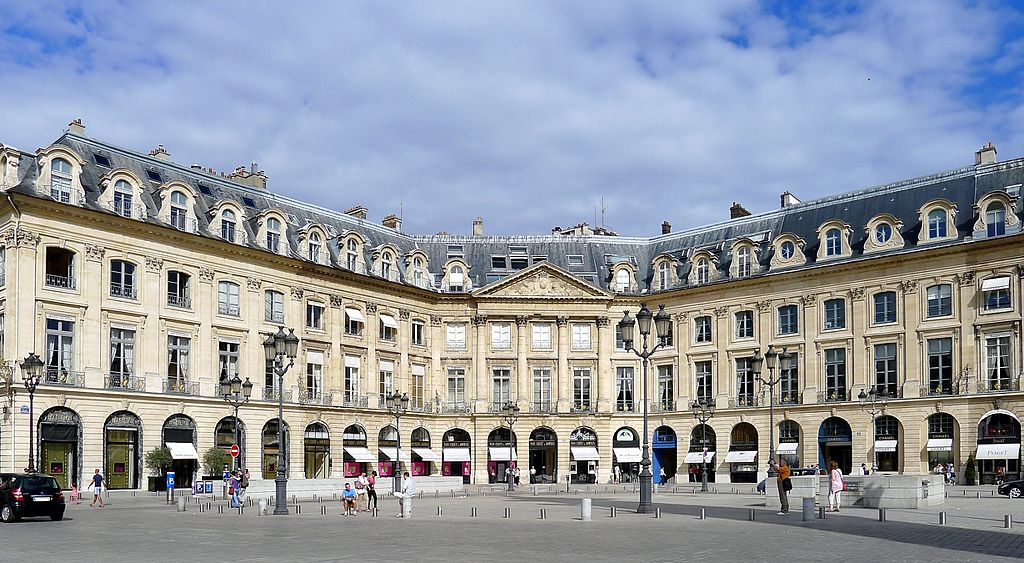 After the death of Charles Ritz in 1976, the hotel endured a period of slow decline. As it lost its lustre, its clientele diminished, and for the first time in its existence, it began to lose money. It was rescued, however, in 1979 by Egyptian businessman, Mohamed Al-Fayed, who purchased the hotel for US$20 million and installed a new managing director, Frank Klein.

Klein, in turn, put Guy Legay, the former chief of the three-star Ledoyen, in charge of the kitchen. Al-Fayed renovated it completely over several years without stopping its operation; this was achieved by annexing two townhouses, joined by an arcade housing many of Paris’s leading boutiques.

he renovation of the hotel was headed by the architect Bernard Gaucherel from 1980 to 1987. The entire renovation cost a total of US$250 million. The restaurants were given a new look, and a swimming pool, health club, and spas were created in the basement. The Little Bar was renamed the Hemingway Bar. In 1988, the Ritz-Escoffier School of French Gastronomy was established in honour of Auguste Escoffier. 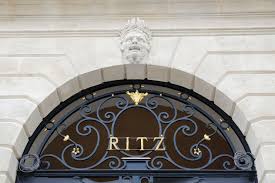 On 31 August 1997, Diana, Princess of Wales and Al-Fayed’s son Dodi Al-Fayed, and their chauffeur Henri Paul, dined in the Imperial Suite of the hotel before leaving the hotel with bodyguard Trevor Rees-Jones, only to have a fatal car accident in the Pont de l’Alma underpass.

Beginning in 2012, the 159 room hotel underwent a four-year, multimillion-euro renovation, re-opening on 6 June 2016.While the hotel has not (yet) applied for the ‘Palace’ distinction from the French ministry of economy, industry and employment, its Imperial Suite has been listed by the French government as a national monument.

Because of its status as a symbol of high society and luxury, the hotel features in many notable works of fiction including novels (F. Scott Fitzgerald’s Tender Is The Night and Hemingway’s The Sun Also Rises), a play (Noël Coward’s play Semi-Monde), and films (Billy Wilder’s 1957 comedy Love in the Afternoon and William Wyler’s 1966 comedy How to Steal a Million).

27 Comments on “Trip to The Ritz, Paris”