Trip to the Maybourne Riviera

Hailing from the same stable as that of Claridge’s, The Connaught and The Berkeley, this hotel strikes a completely different look. It’s resolutely modern and overhangs the cliffs as if it’s about to tumble down them at any moment. As someone who doesn’t like heights, I’ve wondered about paying the hotel a visit but, finally, I just couldn’t resist.

The sleepy village of Roquebrune-Cap-Martin, is home to the South of France’s latest glittering star. Nearly a century ago, Irish designer Eileen Gray parked her roadster beside the little train station here and set out to explore a footpath above the shimmering Mediterranean. A major figure of the Parisian Art Deco scene, she chose a plot of land amid this rocky terrain to build her visionary home-on-stilts, Villa E-1027 (now restored to perfection), designed with no break between interior and exterior; a prototype for modern living.

A few years later, Coco Chanel built Villa Pausa above Roquebrune, entertaining Churchill, Cocteau, Picasso and Dalí. Only Virginia Woolf – a guest at Villa La Souco, another bohemian enclave – remained unimpressed by the isolated villas set on the cliff ‘like eggs’ in a row, where you were doomed to endless contemplation of the sea and the rooftops of Monte Carlo. 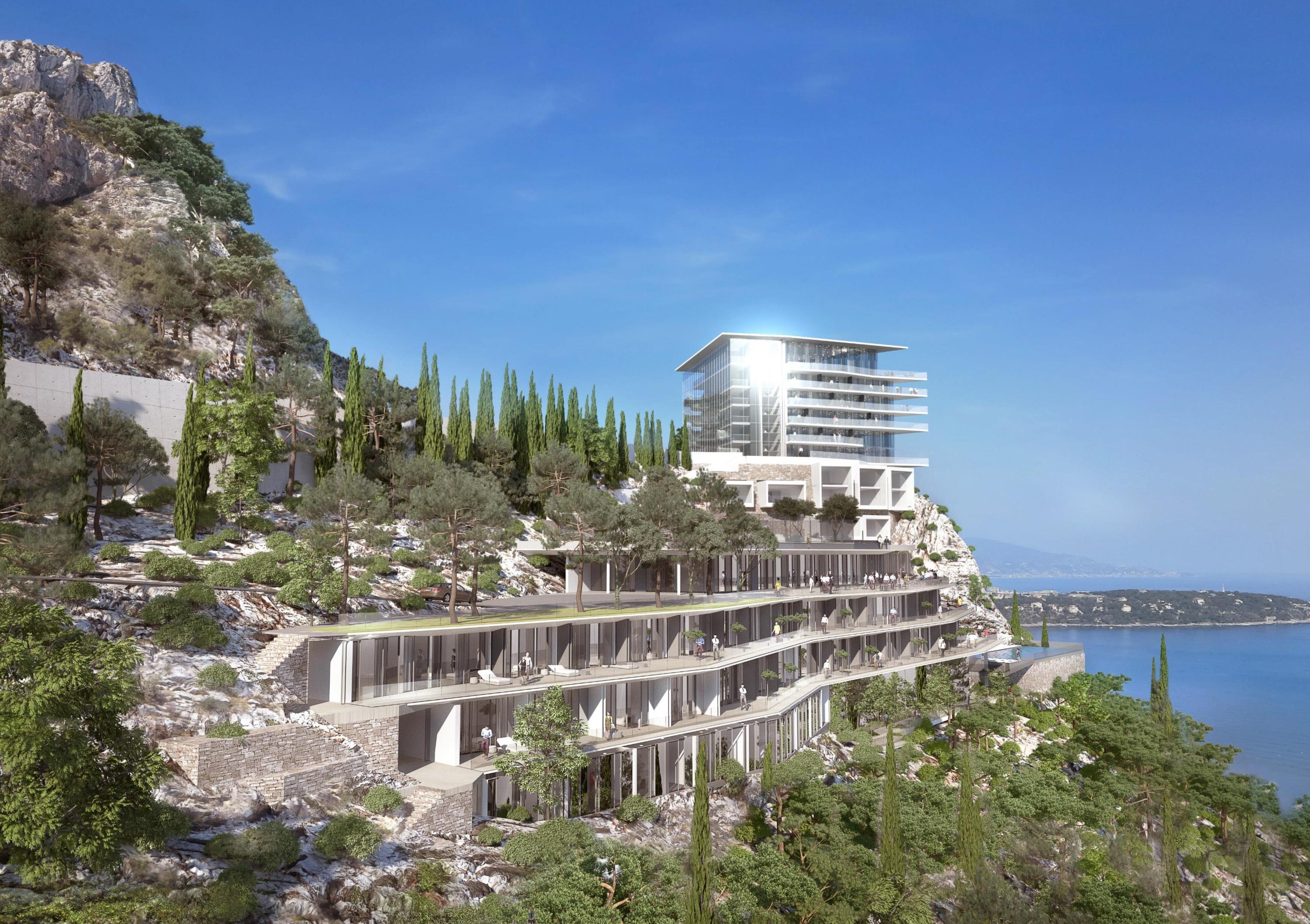 Inland is the Grande Corniche, built by Napoleon and following the route of the ancient Via Julia Augusta, a mountainous road  – along which I’ve cycled many a time – twisting and turning 300m (1,500 ft) above sea level. The plunging views (immortalised in Hitchcock’s Fifties classic To Catch a Thief) are all part of the anticipation prior to arriving at The Maybourne Riviera, the French debut for the Maybourne Hotel Group.

Formerly the site of the Vista Palace hotel which had been closed for many years. Locals heaved a sigh of relief when, in 2018, Paddy McKillen (the Irish-born former head of the Maybourne group and owner of the Chateau La Coste)  took on the project. 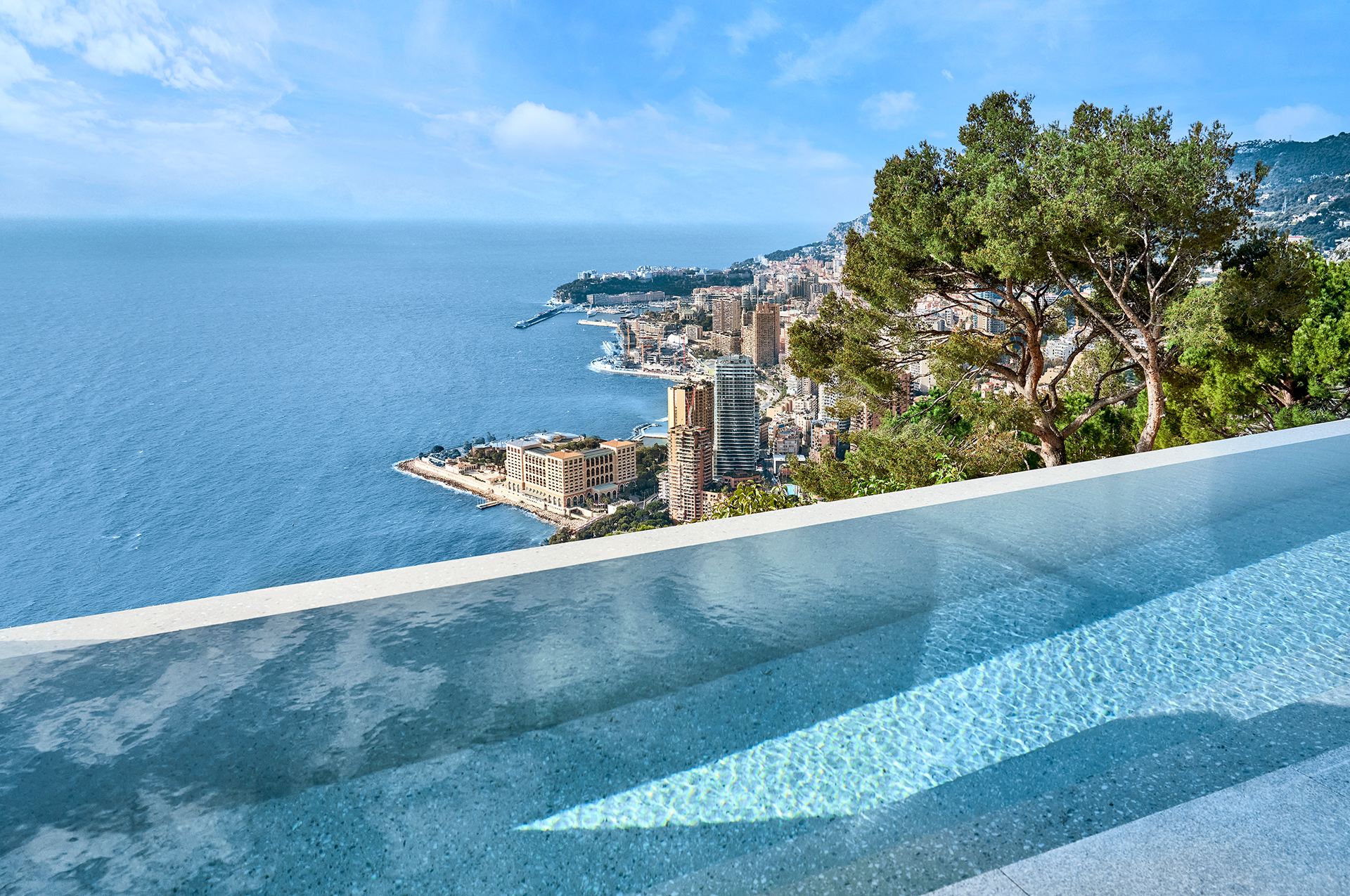 It’s a transformation that has redefined the whole area. Even from down on the beach, you catch glimpses of the hotel’s dazzling block of white criss-crossed lines and floor-to-ceiling glass, designed by veteran French architect Jean-Michel Wilmotte. After dark, it glows with twinkly lights. The cavernous lobby is an unabashed show-stopper, with its colossal sculpture of an intertwined couple by Louise Bourgeois. Gray’s squishy Bibendum chairs, a lacquered screen, plus lithos by Le Corbusier all set the modernist mood. However, the real draw is the light outside, pulling you dangerously close to the edge. 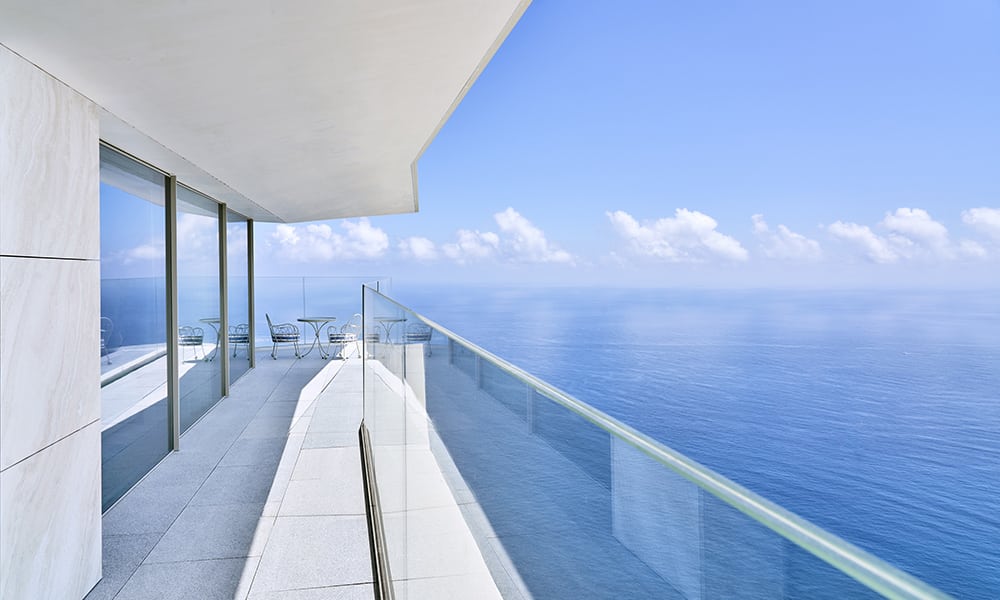 From the terrace of the Riviera Restaurant where we enjoyed lunch, the ever-changing panorama of distant sailboats, mega-yachts and swooping hang-gliders unfurls. From all the rooms and suites, you can watch the cotton-candy sunrise over Cap Martin; sunset – when the hills turn pale blue and the lights of Monte Carlo switch on – might be viewed from your marble bathtub or at the bar with an Aperol. 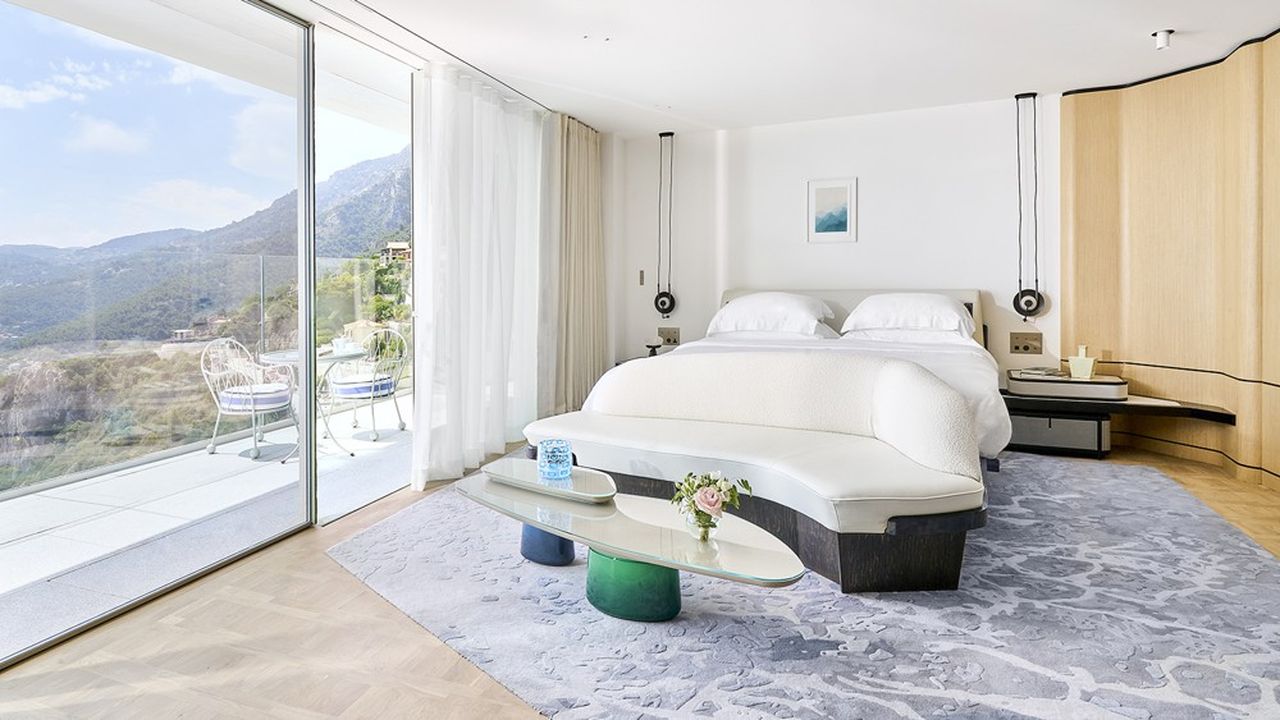 While I didn’t (sadly) get to nose around any of its rooms, I understand that the minimalist rooms come in different shapes and sizes – the apartment-style panoramic suites, with their wrap-around terraces, are a nautical nod to an ocean liner; some of the hill-hugging Corniche rooms with pine-shaded terraces also have private pools. 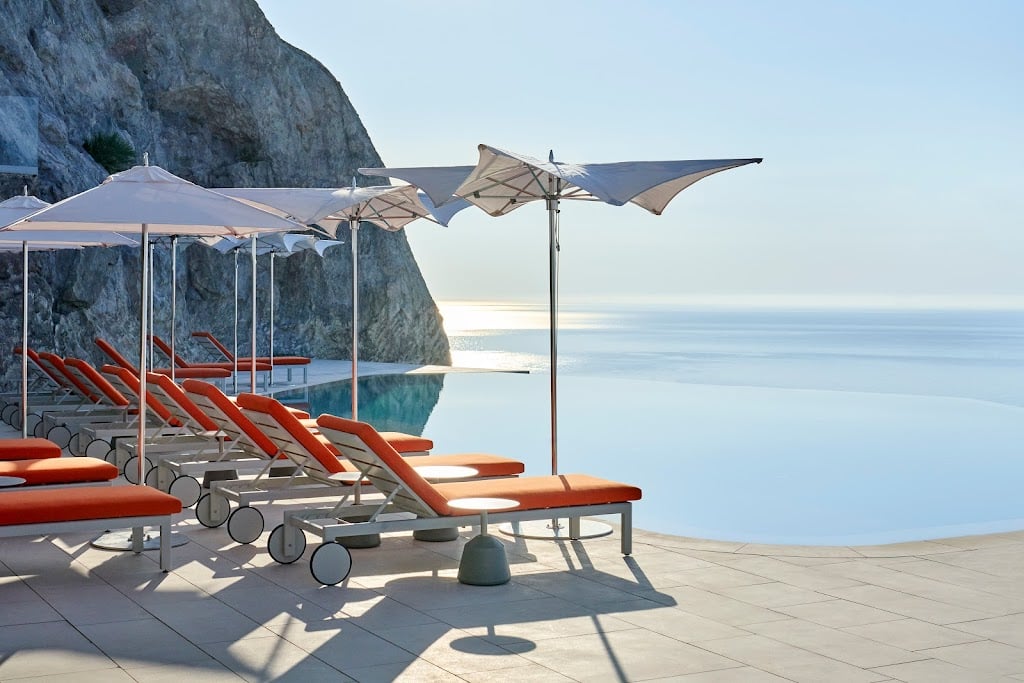 As to be expected,  there’s a cutting-edge holistic spa, a botanical garden, an indoor and outdoor pool – the latter built into the rock so you see nothing but a mirage-like haze of pool, sea and sky. Hidden away at the tip of Cap Martin, the Riviera Playa beach club has no actual beach but from a sunbed on the deck you might as well be on a yacht, ordering lobster. It’s more a place to read in peace than to dance on the tables – thankfully!

Essentially, the ambitious nouveau luxe of The Maybourne Riviera is a multi-faceted reinvention of a hotel that showcases the natural elements surrounding it. To achieve this, the group has gathered some of the biggest names in interior design (Bryan O’Sullivan, André Fu, Pierre Yovanovitch and Michelle Wu, as well as private-jet and yacht notable Rigby & Rigby) along with a collection of museum-quality contemporary art (Tom Shannon, Jeppe Hein, Prune Nourry and Bourgeois, of course, among others). 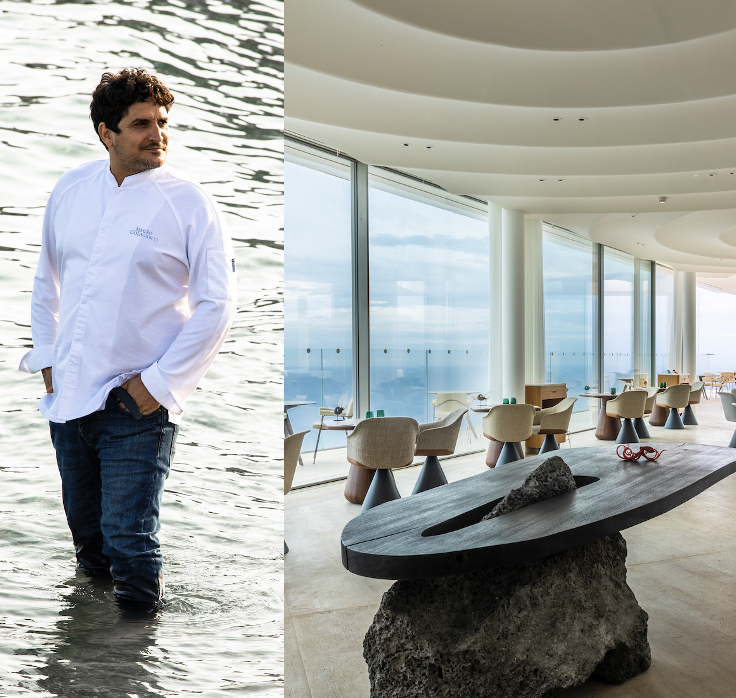 The other big players in this hotel are from the culinary world. Multi-starred Jean-Georges Vongerichten, pastry wizard Benoît Dutreige and  Menton-based Argentinian chef Mauro Colagreco, whose holy trinity of Michelin stars at Mirazur hasn’t deterred him from exploring new territory in his own backyard.

This hotel opening is a game-changer for this part of the Riviera. There’s very little to compare it with. The Grand-Hôtel du Cap-Ferrat, Hôtel du Cap-Eden-Roc and, in Monaco, the Hôtel de Paris, the Hermitage and the Mêtropole are all historic palaces intent on buffing up their old-world image.

But The Maybourne Riviera feels different, it’s more playful and stylish.  And despite involving five celebrated designers, it has achieved aesthetic harmony. Resolutely contemporary, poetic and unpretentious, this hotel looks south, straight into the sun – a revival of that brave, modernist spirit with which Eileen Gray would identify. As she once wrote:

The future projects light, the past only shadows.

All images courtesy of The Maybourne Riviera

21 Comments on “Trip to the Maybourne Riviera”