Serial entrepreneur Patrick Pariente first co-founded clothing company Naf-Naf with his brother Gérard in 1973. Thirty or so years later, after selling the brand to Vivarte in 2007, he then shifted his focus to real estate before creating luxury hotel brand Maisons Pariente, a collection of (currently) four, five-star hotels in tourist hot spots, with his two daughters, Leslie and Kimberley. 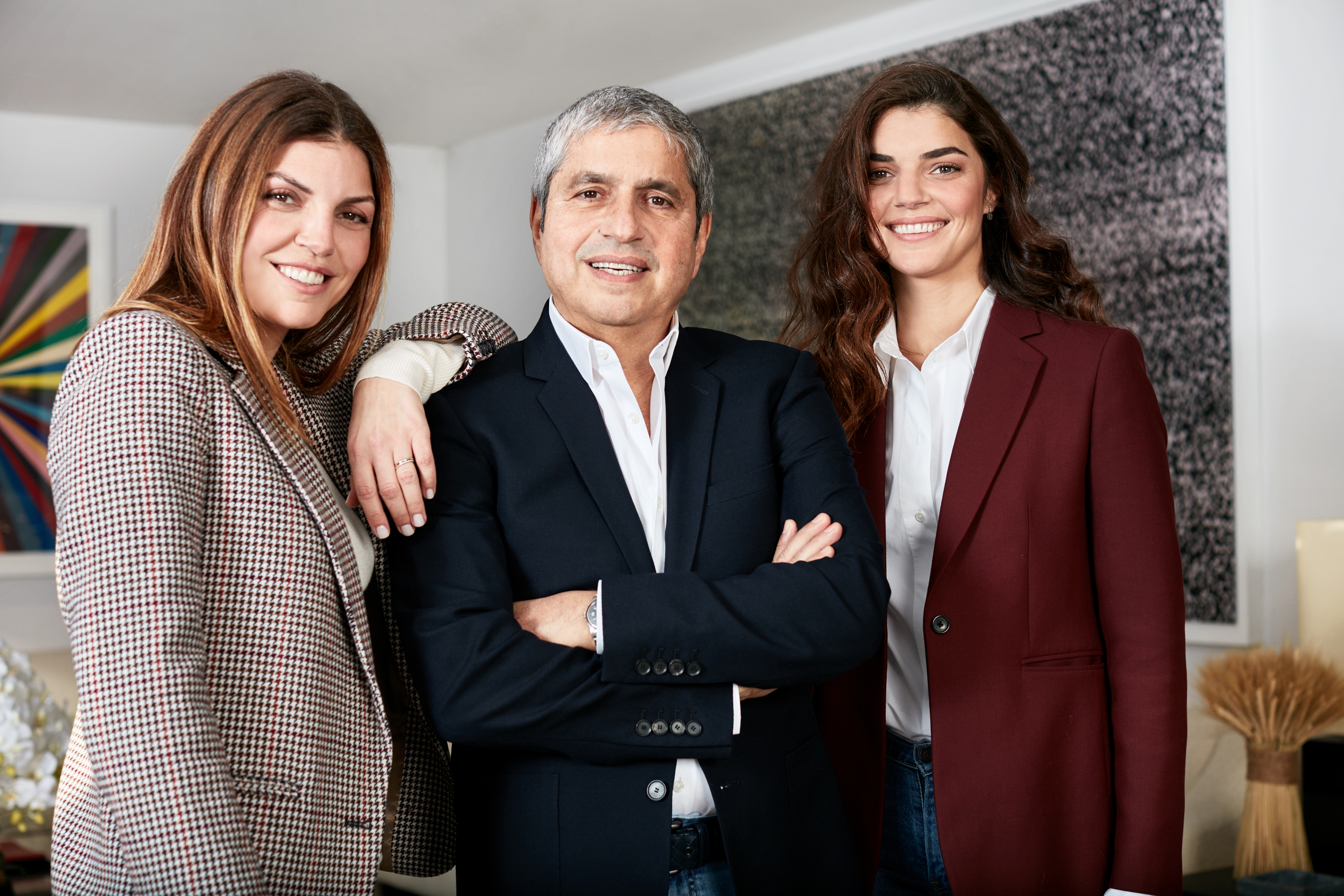 Patrick, is pictured above with his eldest daughter, Leslie Kouhana, who chairs Maisons Pariente and her sister Kimberley Cohen, who’s the Artistic Director. The former started her career in asset management with a major international commercial real estate company, Unibail, while the latter studied at the Fashion Institute of Design and Merchandising in Los Angeles. But it wasn’t long before she decided to combine her love of style with hospitality and design.

The family first dipped its toes into luxury hospitality via its real-estate interests in 2013 with the development of L’Apogée Courchevel, an ultra-luxe alpine hide-out which is managed by the Oetker Collection. This was followed by the 2018 acquisition and total renovation of Hotel Crillon Le Brave, a renowned Relais & Châteaux property at the foot of Mont-Ventoux in Provence. Next up was Hotel Lou Pinet, in Saint-Tropez, Le Coucou in Méribel and, the latest, Le Grand Mazarin in Paris, will open in early 2023. 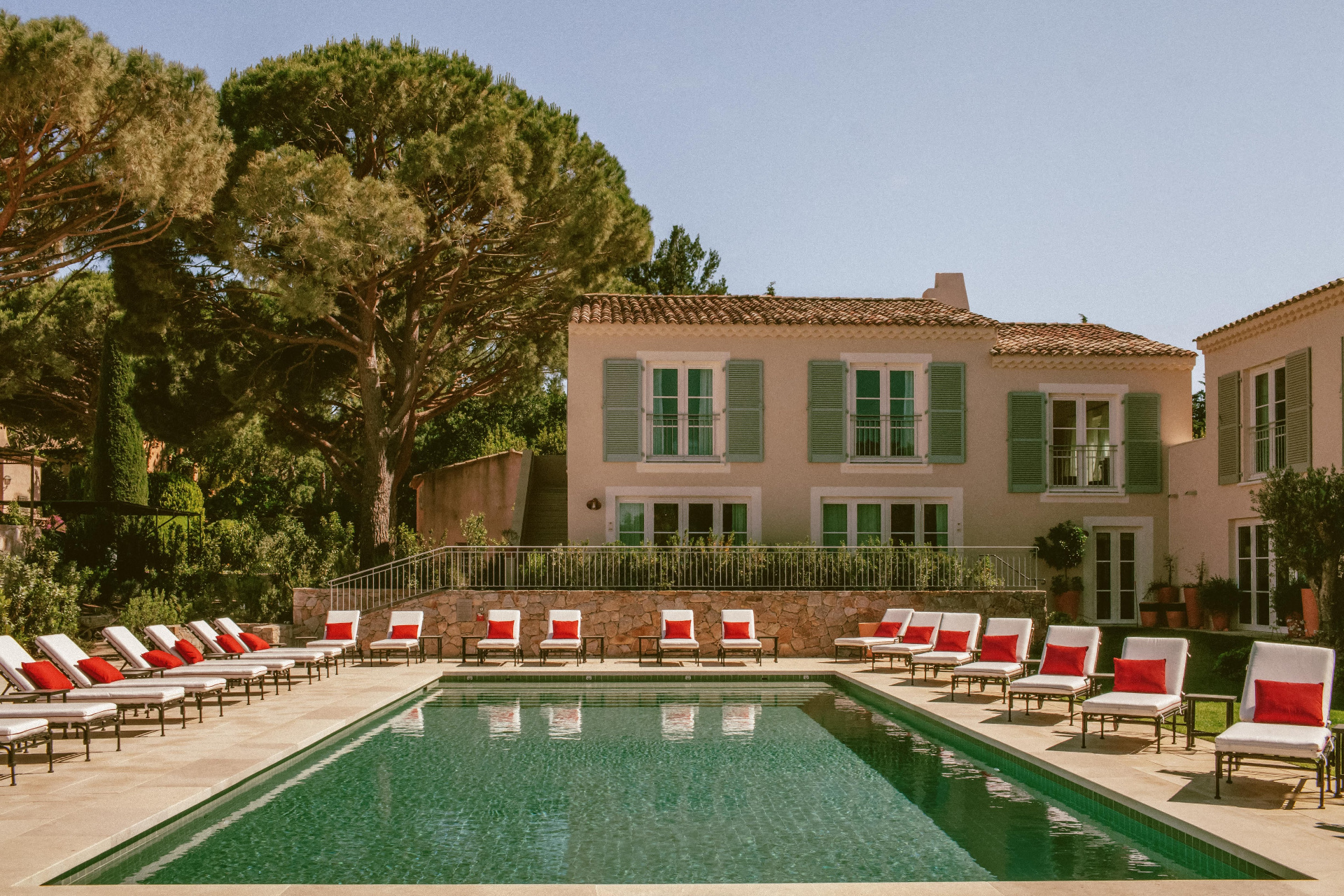 Maisons Pariente offers a newer kind of hospitality; each of its hotels is designed as if it was a private home, and each property has its own unique identity. With another project nearing completion – which is due to open in Le Marais area in Paris, at the beginning of 2023 – it is clear that Maisons Pariente have found a perfect niche in the luxury hotel industry.

Patron Patrick Pariente finds suitable projects and oversees their renovation/construction as well as each hotel’s operations. CEO Leslie Kouhana organises and manages the various teams, co-ordinates different contributors on the project and selects the staff. Meanwhile, Kimberley Cohen focuses on the hotels’ identities, positioning and promotion as well as directing the customer experience on social media.

Hotel Crillon Le Brave is located in Provence, in the Vaucluse. With the foothills of Mont Ventoux on one side and the Dentelles de Montmirail on the other, the medieval village of Crillon le Brave is one of the highlights of Provence, just a 35 minute drive from Avignon.

Unobstructed views on the hotel’s balconies show vines and olive groves stretching as far as the eye can see; the landscape is completely unspoilt. The hotel is a fully fledged part of the village with various private houses, enhancing the sense of togetherness. The current nine houses form an incredible Provençal complex; they are an enchanting jumble of stone houses with traditional tiling and small courtyards linked by pedestrian alleys and galleries, some of which lead to spectacular views of the surrounding area.

Located five minutes away from the Place de Lices, towards the Salins, the Hotel Lou Pinet is a boho-chic refuge miraculously sheltered from the lively surroundings of the town.

The hotel is surrounded by nature; two magnificent pine trees watch over the enchanting garden, through which little winding paths offer a great place to wander among the scents of lavender, orange, lemon and jasmine. Its swimming pool – one of the biggest in Saint-Tropez – takes centre stage on the huge terrace. The hotel ‘s  spaces were designed to bring sophistication and intimacy to the hideaway. The hotel’s design also draws on Provence’s tremendous decorative arts heritage, from glass to ceramics, and was inspired by artists such as Matisse, Calder and Picasso who were also captivated by the beauty of the South of France.

Perched on the heights of Belvédère, close to Le Rond-Point des Pistes, Le Coucou is in one of the loveliest spots in Méribel. The hotel rubs shoulders with the snow-capped summits and overlooks the entire valley. It interprets the mountain lifestyle in a chic and casual way, where five-star luxury enhances every experience, a reinterpretation of the classic repertoire of the Alpine style, with a contemporary look that is minimal, but warm and subtly original.

Just a few steps away from the Hôtel de Ville, near the Seine, at the corner of rue de la Verrerie and rue des Archives, is Le Grand Mazarin. The Group’s first urban hotel and one that’ll be open all year long. The hotel will be as Parisian, eclectic and cosmopolitan as the Marais district thanks to its bold design which creates a story about the place and a real experience for the guest.

The story is that the building belonged to an educated woman in the 1900s who would organise salonières to talk about the latest books, which was once forbidden. It is said she had creative friends from all over and travelled the world collecting art – a wonderful summation of the avant-garde, creative culture of Le Marais, full of intrigue and surprise. The Group wanted to reflect this in the hotel.  It has a complete mixture of genres, styles, and fabrics that create a “je ne sais quoi” that makes it warm and cosy but at the same time very luxurious.

Each hotel is unique; deeply personalised, never standardised. The Group tends to work with renowned residential architects, rather than hospitality professionals, to ensure that its guests will feel at home away from home. It likes to mix contemporary design with vintage pieces.

Above all, the Group wants to create a gateway experience where the guests will feel comfortable. It wants its guests to feel at home and to ensure that the design of each hotel always fits with the location. Isn’t that just what we all want in a hotel?

All images courtesy of Maisons Pariente