Every global fashion house worth its salt seems to have its own Foundation; I’ve no doubt it’s very tax efficient! This is where the owners get to display their burgeoning art collection. As part of our recent trip to Milan, we viewed the Fondazione Prada though only from the outside.

Fondazione Prada, co-chaired by Prada owners Miuccia Prada and Patrizio Bertelli since 1995, is an institution dedicated to contemporary art and culture which opened in Milan in 2015 in a distillery complex re-developed by architect Rem Koolhaas. 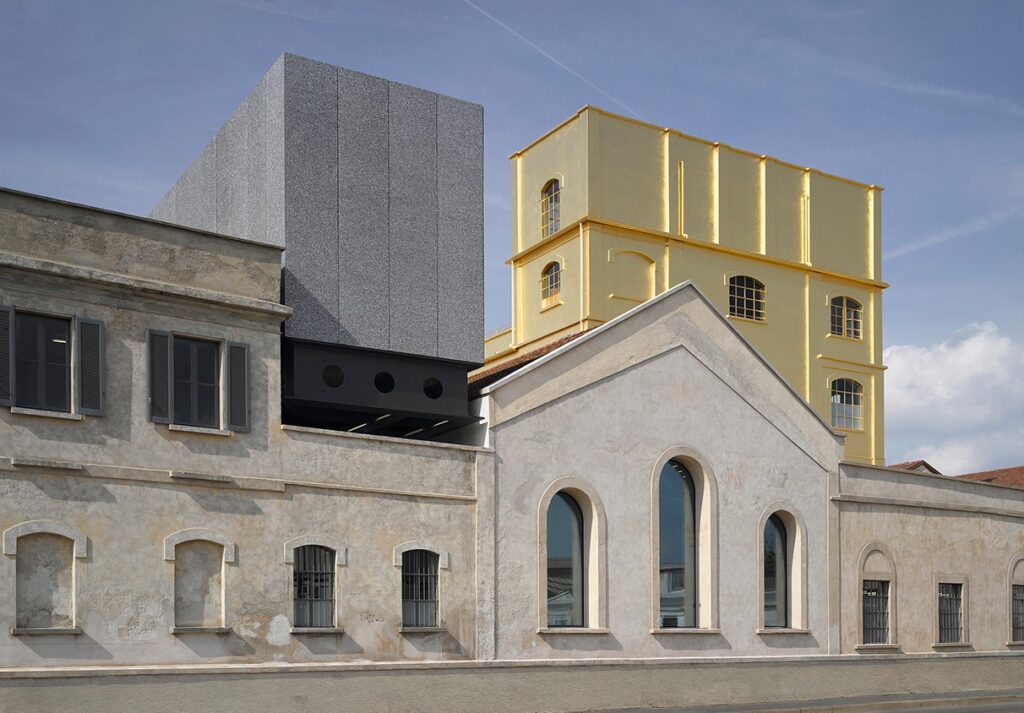 Astonishingly, Milan has no public contemporary art museum. Sure, it has the Padiglione d’Arte Contemporanea, but this is small space with no room for major exhibitions, let alone a collection. There’s a section of the Museo del Novecento dedicated to contemporary art but it is an add-on to the main purpose of the museum.

The Fondazione is housed in the redevelopment of a factory complex built initially in the 1910s in the form of a courtyard surrounded by warehouses, laboratories and brewing silos. It is effectively a much larger, more open, industrial version of the ubiquitous Milanese closed palazzo.

So while the Fondazione Prada building is a private institution, it has a very public role. It has effectively been given a publicly sanctioned role as the pre-eminent contemporary art space in Milan. 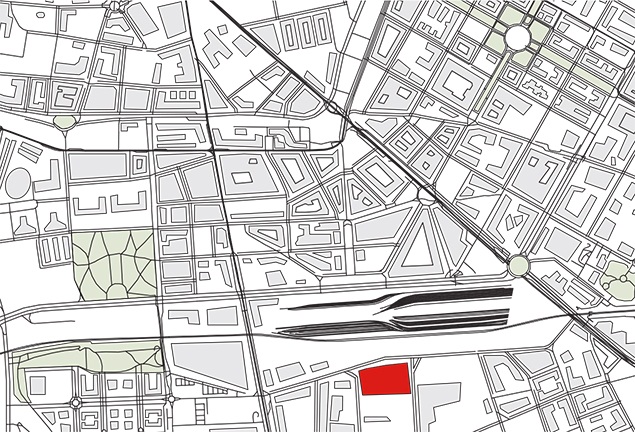 Located in Largo Isarco, in the southern part of Milan, and lying just to the south of the east–west railway lines which sever the city, the site has been opened up at three of its four corners. At its north-east corner, the traditional entrance has been retained with a long former administration block for ticketing and amenities running south. At the south-east corner, the Bar Luce styled by Wes Anderson opens up both to the street and the internal courtyard. 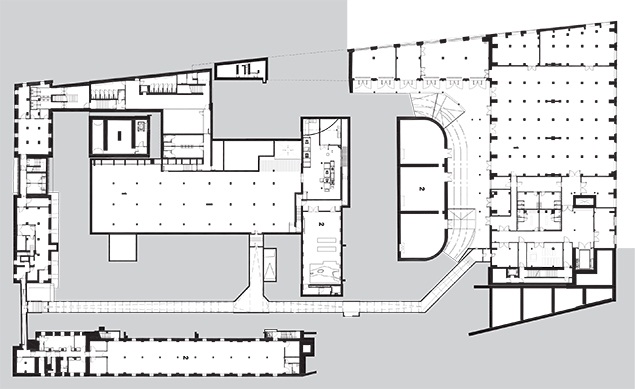 There is inherently a play between the idea of private wealth and public display in this building. 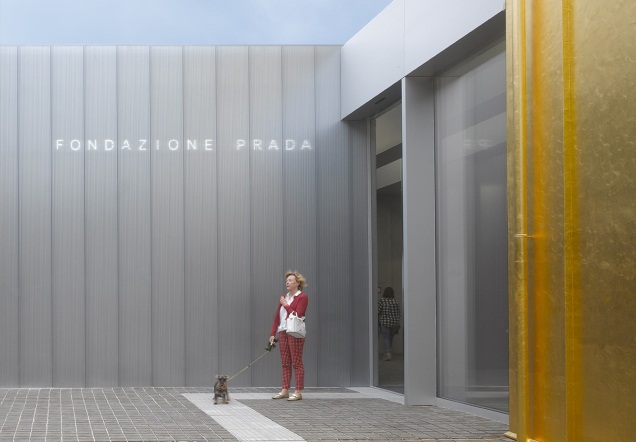 One of the surviving buildings – a three-storey high administrative block – has been clad entirely in gold leaf. It was hammered on painstakingly over three months, over drainpipes, window sills, whatever. Immediately adjacent is a new building; one that replaces a demolished outbuilding that is effectively a replica of the ground floor of the Neue Nationalgalerie in Berlin – the archetype of public art institutions.

Architecturally the golden building lights up the dull tones of the compound. The site is defined to the north and south by two long two-storey buildings which are simple brick structures covered in render. These house more exhibition space on the ground floor with administration offices and studios above. 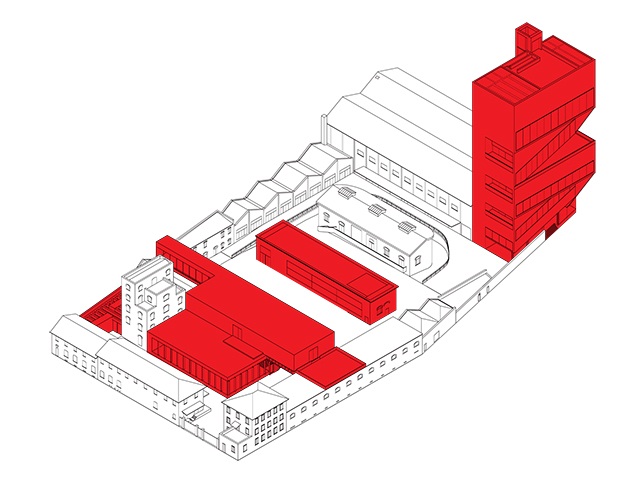 The podium is clad in aluminium foam developed for military applications because it is very light. It is a deeply textured, tactile material when viewed up close but at a distance it fades to grey. 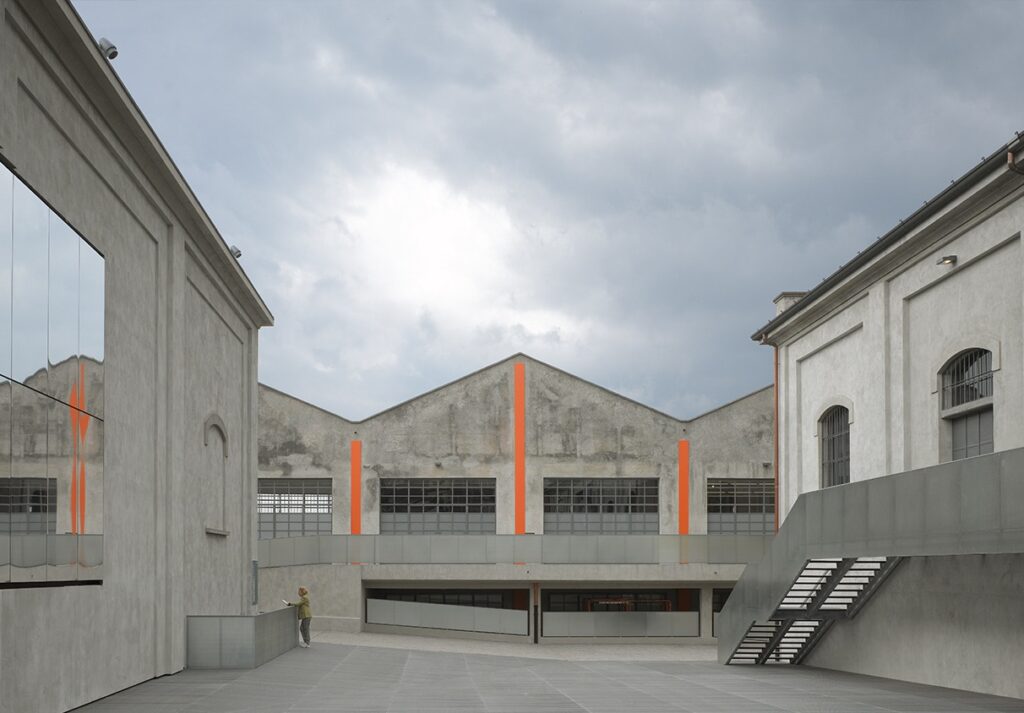 To comply with more recently introduced building codes, concrete trusses on the existing rendered buildings have had aluminium plates bolted to either side of them as have the columns. No attempt has been made to disguise the heavy-handedness of this stipulation and the extra structural support has been painted a very Dutch bright orange lest it not be noticed! 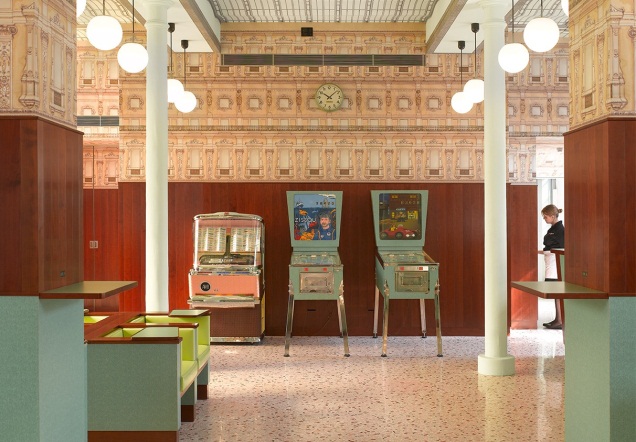 Apart from the Podium and the Cinema, which are all new builds, the complex is in many ways a stabilised industrial ruin, rather than being a conventional museum. Even these two new structures have massive bay doors in the side allowing them to be fully opened. 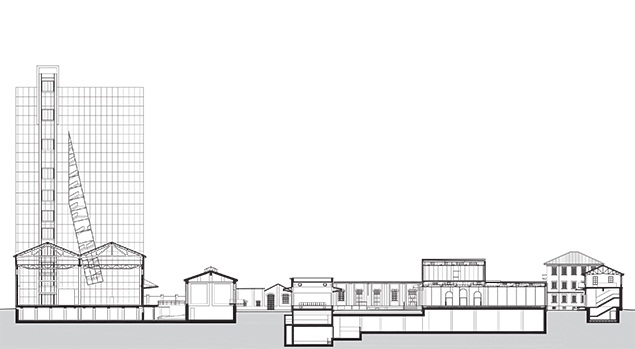 The latest addition, a newish tower, displays one of Koolhaas’s games with extrusion. It begins with a triangular floor plan but after the third level it becomes rectangular again, allowing the structure to lean out and protrude over the street. The fourth storey is triangular again before the building is resolved at the fifth floor with a square plan. On top of that there is an accessible roof terrace with views back towards the Duomo of Milan.

All images courtesy of Fondazione Prada