Our first French holiday home was an apartment directly overlooking the beach at Saint Laurent du Var. Acquired largely due to its proximity to Nice airport, shops (Cap 3000 shopping centre) and restaurants, it was the perfect holiday bolt-hole. Like many towns the length of the French Riviera, it has a new and an Old Town, the latter is located further up the Var valley built on higher ground and dates back to at least 11th century. It has picturesque winding streets, an 11th century Romanesque-style church and was the last “French” town before crossing the river Var into the Italian, County of Nice. I understand crossing the river was rather precarious and done on the the backs of men called “gueyeurs”, until the construction of a bridge in 1792. 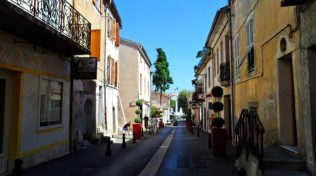 Although the village dates largely from 11th and 12th centuries, it had a period of renewal after a number of disasters that occurred between 12th and 15th centuries which depopulated it. After an appeal, it was repopulated by Italian immigrants from Liguria. You may recall that something similar happened, albeit later, in Valbonne.

The town’s reconstruction took account of the natural elements such as water, wind and sun. The principle of “calandage” (building of side or central trenches), still visible in Rue Raphaël Monso, were used to remove rainwater while streets and squares were built to encourage shade. The new Saint Laurent was built on a grid pattern with streets cutting across each other at right angles forming a rectangle and integrating earlier buildings. The materials used included large smooth stones rolled from the bed of the Var for the walls, street pavements and ramparts and thin red bricks for the archways, door and window frames and doorsteps.

Typical houses from this era (bumpy walls, honey coloured, with pebbles that stand out against the dark cement) are still visible in the Rue des Ramparts and at the western end of the Rue du Var with its lookout tower. The houses were generally built over three floors, a ground floor which comprised the cowshed or cellar, the first floor where the inhabitants lived and the attic which was used as a barn, store or drying room. Due to the narrowness of the streets and the limited number of windows, the houses were very dark inside.

During the centuries that followed, changes largely due to demographics took place: raised houses, attics turned into bedrooms or drying rooms for fruit, doorways were made wider. As a result, these doorways were sometimes transformed and the resulting archways are still visible in some houses in the village.

It was only in 18th century that building took place outside the ramparts, with several mills and sawmills along the side of the river and in the district of Pignatières. But these developments remained limited due to the town’s insecurity relating to its position neighbouring the border. 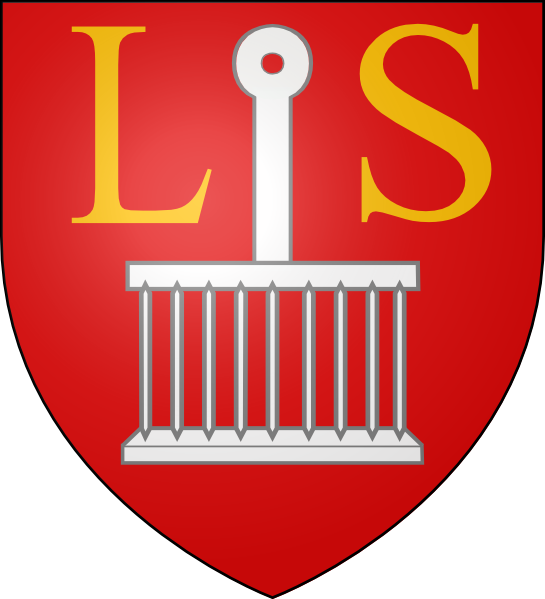 The first record of the Saint Laurent du Var shield is in the 1866 “The Armorials of  Provencal Communes” by Louis de Bresc. Its coat of arms had a silver grill, with the capital letters L and S in gold on either side of the main lever. This was later embelished  with the military decorations the Croix de Guerre with the Ordre de l’Armée for the contribution made by the population and its resistance prior to Liberation.

The grill represents the martyr Saint Laurent who according to legend was burned alive. The letters L and S stand for Laurentius Sanctus (Saint Laurent). They are accentuated by the proud Provencal motto “Digo li qué vengon” (Tell them to come), which is a sort of bravado related to its former position as a border town. Its logo has now been thoroughly modernised.

The Old Town including Place Adrien Castillon, a charming little square with that 11th century church is well worth a visit. Just beyond the church is the “Hotel de Ville” (town hall), a rather grand building set in pleasantly shaded landscaped gardens. Adjacent to which there is a children’s playground and a number of boules pitches, as well as a theatre. 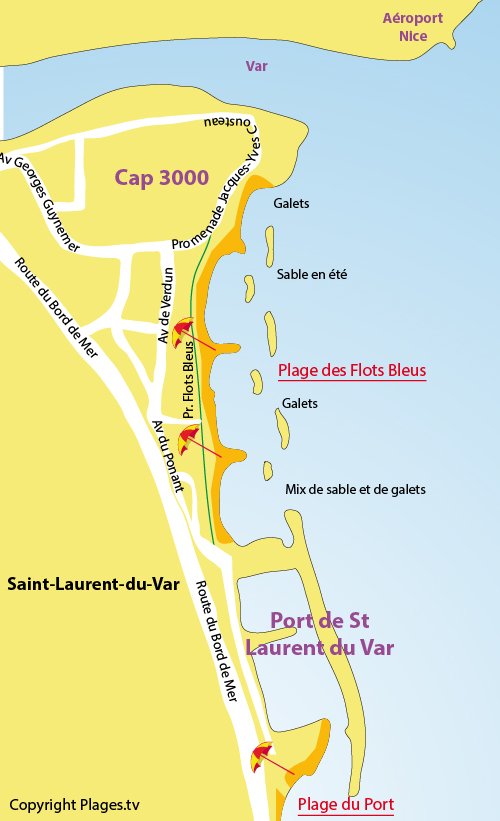 Now let’s head through its unremarkable town centre to its newer part on the opposite side of the Var river to Nice aiport, alonside the sea, which I understand were formerly fields of artichokes. Saint Laurent du Var sits on the long curve of stony beach on the Bay of Angels that runs right from Nice down to Antibes. There’s plenty watersports, including jetskis, pontoons, paddleboards and pedalos – or you could just rent a deckchair in one of the beach clubs and have a long leisurely lunch at one of the many bars and restaurants overlooking the water. 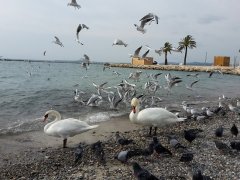 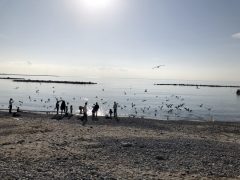 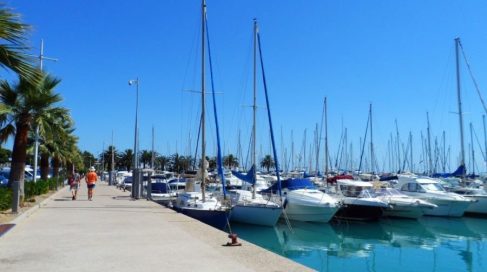 The stretch of sea beside the Plage des Flots Bleus, between Cap 3000 and the harbour, is a protected marine area with a total ban on fishing. An artificial cove has been created to encourage sealife to the area. In addition, the Var valley is a renowned bird reserve with plovers, sandpipers, grey herons, egrets, flamingos and many more – 264 species have been observed here. There’s a nature path  with information panels to help you identify the birds, but don’t forget your binoculars.

Saint Laurent du Var’s claim to fame is largely because of its enormous Cap 3000 shopping mall, more of which next week.

It was only when I started to write about Saint Laurent du Var (coming tomorrow) that I realised I’d never really written about us acquiring our first holiday flat in France. So I thought I’d better remedy that huge oversight pronto. Please bear with me, it’s a bit of a shaggy dog story.

My beloved had organised a training trip to Nice for a large number of UK dentists and dental technicians which took place in Nice University’s newly installed simulation suite. A travel agent had organised the trip and based everyone at the Holiday Inn Resort Hotel in Saint Laurent du Var. However, on checking in, my beloved discovered the hotel was a room short and quite naturally he got bumped to another Holiday Inn nearby. To compensate for their error, the hotel offered my beloved a freebie weekend.

We had recently started taking our god-daughter for a few days away and thought she might enjoy a trip to the French Riviera. Little did we know at the time that this would prove to be one of those defining moments. The hotel very kindly gave us a suite for our long weekend break which was much enjoyed by all. The following year, my god-daughter asked if she could return to France for our annual trip away; so we did. By the time the following year rolled around, my beloved had accepted a transfer to his company’s HQ in Germany, to look after its global sales and marketing activities outside of its home (German) market.

Realising he would be regularly circumnavigating the globe and constantly staying in hotels, my beloved expressed a desire to buy a holiday apartment. I was not wholly on board with this. After all, the only time I ever got waited on hand and foot was in a hotel! We looked at maps and flight schedules and realised Nice would make a perfect location. We returned in late autumn to the hotel we’d previously stayed in with our god-daughter to begin our search. 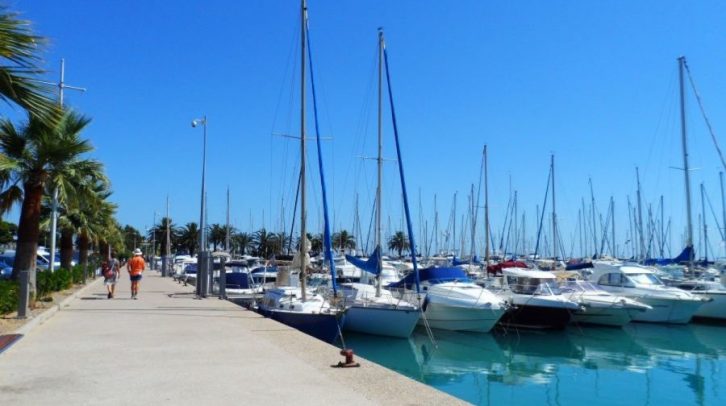 That first morning, as we walked along the esplanade in Saint Laurent du Var, we realised its proximity to the airport (15 minute walk), abundant bars and restaurants, plus its Cap 3000 shopping mall, meant it was an ideal location for a holiday home. In addition there were a number of apartment blocks with flats directly overlooking the beach. 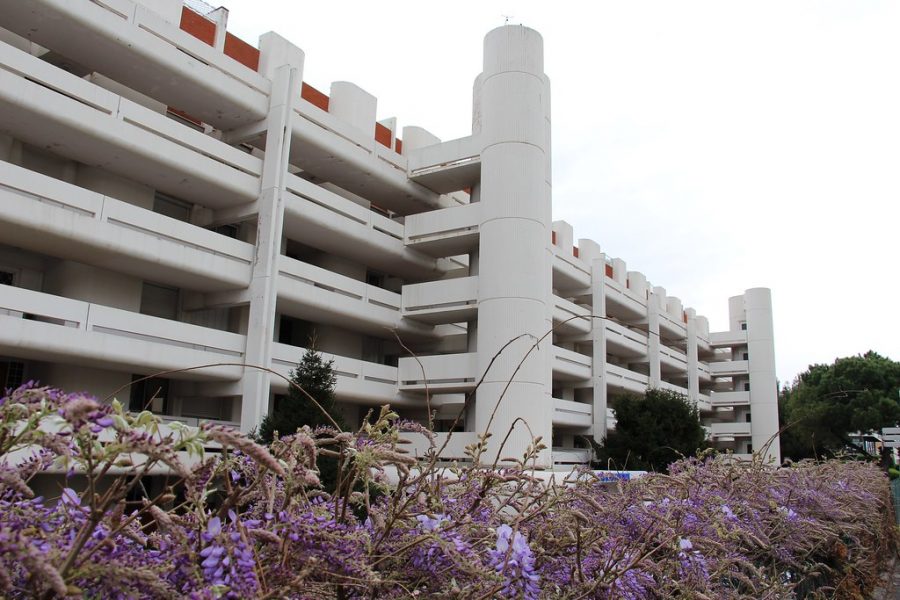 We popped into the nearest estate agent and asked if they had any flats overlooking the beach for sale. They did have one and an inspection visit was organised immediately. The apartment was a second-floor duplex in a striking (now Heritage listed) 1970s building which afforded splendid sea views. The flat was in mint condition, although somewhat eccentrically decorated. We loved it and made an offer there and then to the amazement of the owner and agent. Our offer was accepted and completion was set for early April (Easter) the following year, a date which suited both parties.

For a couple of years we spent all our holidays in the apartment, meeting up there most weekends and every bank holiday. I would fly over Friday evening from Luton and back again on a very early Monday morning flight, courtesy of Easyjet. My beloved would either fly in from Stuttgart or drive. Though, in any event, he had to leave by lunchtime on Sunday.

Although, I’d resisted the idea of a holiday home at first. I really came to love the lifestyle. So much so that I began to resent having to go back to the UK on Monday morning. We started discussing how we might make the move more permanent. The rest, as they say, is history!