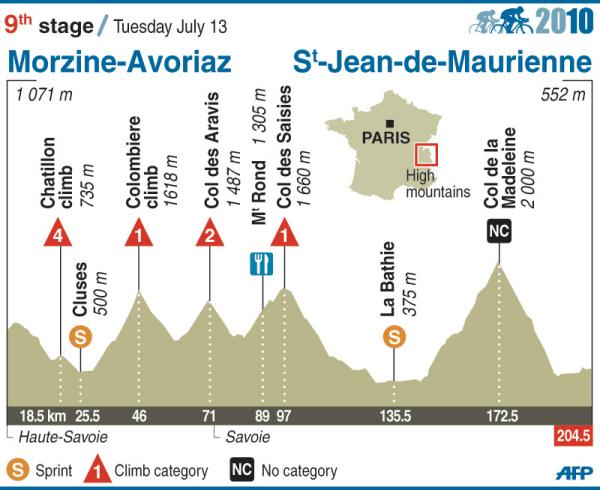 On the eve of Bastille Day many towns, including mine, host a spectacular fireworks display. In fact, sitting on my balcony with a view of the coast from Cap Ferrat to Cap d’Antibes, I can witness two concurrent displays.

The hot and heavy weather is continuing and most days I seek out routes in the shade but even so when I arrived at Tourettes sur Loup this morning I could’ve happily dived right into the fountain. However, mindful of my position of Club Secretary, I decided against it.

Back home, I took a cold shower and slipped into something  light and flimsy to watch this afternoon’s stage: 204km from Morzine-Avoriaz to St-Jean-de Maurienne. I needed to wear something light because I was in the home straight of my hors categorie ironing mountain which had been hanging around since the start of the Giro. Luckily my beloved has an extensive wardrobe dating back to when we had three apartments.

I feel rather guilty about the amount of time I spend glued to the Tour which I partially alleviate by multi-tasking. I have ironed over 80 shirts and around 100 t-shirts. Tomorrow, I’ll start on the pile of mending: missing buttons, hems and the like. Usually, I manage to sort out and tidy all the cupboards and drawers in the lounge and re-organise my dressing room. Sadly, this year they’ll have to wait for the Vuelta.

Meanwhile, back to the action. With Lance’s hopes of adding to his Tour crowns crushed on Sunday, everyone else was still pretty much in contention as the peloton rolled out for today’s testing stage.

An early breakaway including 5 French riders was established.  BMC was controlling the peloton but there were riders popping off the back from quite early on thanks to a flurry of attacks and the profile of today’s leg sapping stage.

By the time they reached the foot of the Col de la Madelaine, the breakaway had been whittled down, the gruppetto was well established and the leading contenders were being shelled out the back like peas under pressure from first Saxo Bank, and then Astana.

With 40km to go, Andy Schleck turned the screw but couldn’t distance Alberto Contador. Indeed the two rode together to the crest and then down the other side, Alberto looking the more comfortable, until they joined up with Christophe Moreau (one of the original escapees) with around 18km to go to the finish. Samu Sanchez had been trying to bridge up to them but, despite treating us to a master class in descending, never quite managed to close the gap. With 10km to go, he was out grimacing Nikki Sorensen.

Schleck and Contador caught the remainder of the breakaway on the run in to the finish which was won by Sandy Casar (FDJ): yet another French win. Schleck the younger was now in yellow, Contador was sitting comfortably at 41 seconds behind with Samu in 3rd, 2:45 down. Barring a disaster, it’s now a two horse race.