I am not a fan of horror or scary movies, not even slightly scary ones. For example, I only have to hear the opening bars to the theme tune to Jaws for my blood to chill. I might be going to Australia in September, but I won’t be putting a foot on any beaches, much less dipping any of my 10 toes into the sea. So it was with great surprise, and much trepidation, that I read a shark had been sighted off my home town’s shores.

Yes, the red flag has been flying over the beach for a couple of days since  two lifeguards thought they saw a shark offshore. It’s now been assumed that it was probably only a dolphin and that they overreacted. Well, much better to be safe than sorry!

I hardly ever swim in the sea, despite my cycling coach suggesting that I spend some time swimming. He’s never seen me swim otherwise he’d realise its futility. Thirty minutes of my frantic, thrashing doggie paddle uses under 100 calories. In truth, I’ve not even been down to the pool this summer.  But, after the so-called shark sightings, I may never venture onto the seashore again. Much safer to stick to cycling.

Today’s training ride included yet more of those low gear, high cadence exercises of which my coach is much enamoured and are really tiring. Still if, as a consequence, I achieve 100th of Alberto’s fluency on the bike, it’ll all have been worthwhile. My coach has also re-introduced solo leg training on the home trainer after he realised that I couldn’t do the exercise out on the road. Well, I could but at such an embarrassingly slow pace. Much better to perform these exertions in the privacy of my bedroom and away from sniggering onlookers.

I got back in time from today’s training ride to watch the ever spritely, Robbie “Pocket-Rocket” McEwan kick ass in stage 1 of the Eneco Tour and win with a well-timed surge. He’s going to be in fine form for the World Championships in Melbourne, for which I have volunteered and where I have been allocated an interesting role. As usual, I volunteered for most things while giving details of what I’d done at past championships. But the organisers have  elected to give me something I’ve not done before which I suspect may have more to do with my linguistic skills. So far no news about the requirement to attend a couple of training days beforehand which could scupper my chances, as I won’t be able to attend.

My beloved, who was coming with me to Australia for the whole two weeks, is now cutting short his stay by one week to head for the US. So I will be sightseeing on my own, plus ca change! Though, obviously I won’t be spending any time on the beach, or in the sea. My one outstanding issue is how to get back to Nice with the bike (and my luggage) on the train from Milan airport. 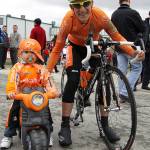 Our guests and my beloved have departed leaving me to savour being on my own once more. I probably sound as if I’ve got a touch of the Howard Hughes but there’s something very liberating about not being at anyone’s beck and call. I can do what I want, when I want.

Having luxuriated in a day off the bike, I was eager to clamber back into lycra and profit from the continued warm weather. The silly tan lines are now clearly visible on the legs (sock line above ankle and shorts line across thighs). But,  because my legs don’t tan evenly, the backs of my legs and thighs tan well but sadly my shins don’t, the overall effect is somehow worse. I had already done in excess of today’s 3hr group ride on Monday, so I opted for yesterday’s ride, in a fasted state, followed by some core-strength exercises and stretching.

This afternoon, having speedily cleaned up all traces of my beloved and guests, I treated myself to watching Circuit de la Sarthe, Scheldeprijs and Vuelta Ciclista al Pais Vasco. I know, cycling in triplicate! By the way, do check out my friend Susi’s excellent pictures from that last race on the cyclingnews website.

Lest you think I’ve spent the afternoon loafing around, I should add that, at the same time as watching the cycling, I demolished a category 3 mountain of my husband’s ironing. It was in severe danger of developing into something larger and less manageable and I’m keep to avoid any further vuelta type situations developing.

In Belgium, with about 37km to go, Tom Boonen became entangled with a couple of riders from Euskatel. Guess who fared worse from that encounter? Yes, if I were a 60kg skinny Spaniard he’d be the last person I’d want to collide with. The Euskis were DNFs but Tom got in the slipstream of his team car and following a very lengthy shoe swop was soon back into the peloton. He launched the sprint, leading out team mate Wouter Weylandt and Tyler Farrar, who won ahead of Rockin’ Robbie McEwan.

In the Basque country, Francesco Gavazzi (Lampre) beat Oscar Freire in another sprint finish, but the latter now assumes the yellow jersey ahead of tomorrow’s tough mountain stage. While in the Circuit de la Sarthe, Anthony Ravard (AG2R) won stage 2a and Tiago Machado, one of the few surviving Radioshackers,  won the 2b time-trial but Luis Leon Sanchez is still looking good in yellow. Actually, he looks pretty good in most things. 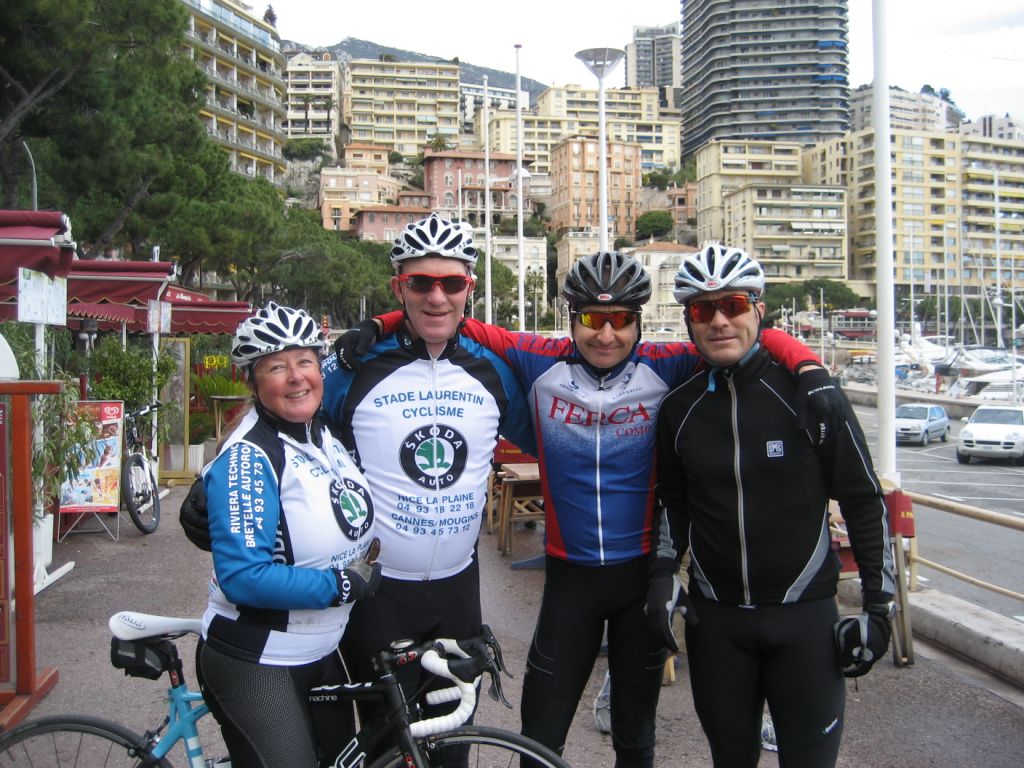 My guests have departed after a very enjoyable few days. The boys arrived Thursday evening in time for a light dinner. It was very windy that evening and I had hoped it might blow away the rain clouds. But no, we awoke to torrential rain. After a hearty breakfast we went to one of the larger bike shops for a browse and then collected my beloved from the airport.

After lunch, the weather cleared, the sun came up and started drying the roads. We walked down to my LBS for a browse and a chat, returning in time for me to prepare dinner.

Saturday dawned bright and warm so we set off around 10:00am and headed towards Monte Carlo where we stopped for coffee and the boys admired the local attractions (all female). We decided to return via La Turbie which afforded them plenty of photo opportunities while waiting for me to catch up. Thereafter, it was a swift descent past Eze village to Nice and home.

After lunch the boys had a wee cat nap and then fortified themselves with some of my fruit cake. Saturday evening we dined at a local restaurant which has recently changed hands. We were delighted to find that the cuisine had further improved and the new owners were resting neither on their laurels nor on the reputation of the previous owner.

Today’s pointage was at Valbonne and it took me longer to warm up this morning so that I was soon distanced by the rest of my clubmates on the climb out of Biot. Resigned to riding on my own, I was shortly joined by a rag bag of riders from other clubs and merrily rode with them. They expressed horror on arriving in Valbonne to discover an Antiques Fair on the spot where the pointage is normally held. I was able to direct them to the correct location on the other side of the village.

I arrived just after my club had departed the pointage so I rode back, as is my wont, with riders from another club, cutting a good 20km off the proposed route so that I could return home in time to prepare lunch for the ravening hordes, all three of them. The boys departed after lunch while my beloved went to meet a business contact in Nice. I rewarded myself with a lazy afternoon on the sofa in my fleecy track suit (what else) catching up on the sports news. Both my football teams recorded draws: Spurs 0-0 AVFC and OGCN 1 – 1 Lille. AVFC take a point from one of their closest rivals for 4th place, while OGCN steadies the ship.

First up, my heart was gladdened by the number of wins recorded by the more mature members of the peloton: Rocket Robbie (Katusha) in the Trofeo Palma de Mallorca, Nico Eeckhout (An-Post Sean Kelly) on the final stage of Etoile de Besseges and Ale-jet in GP Costa degli Etruschi. Sky romped home 8 seconds ahead of the rest in the TTT at the Tour of Qatar putting Edvald Boassen Hagan in the leader’s jersey where he’s going to be difficult to dislodge. Quick Step’s Tom Boonen is 20 seconds down after his team finished 5th. Cervelo initially finished second but were penalized when an eagle eyed Chinese judge saw Barbie Barbie Haussler push a colleague. Cervelo claimed he was just steadying him, but the commissars remained unconvinced.

On a more sombre note, I was saddened to read of the untimely death of the maestro of the Italian road racing team whom I was fortunate to meet in Varese. My condolences go to Franco Ballerini’s family and friends.