Yesterday was one of rest and relaxation ie no cycling. However, I managed to clear a lot of administrative stuff and ready myself for the onslaught involved in the renewal of cycling licences. This year, thank goodness, I will be flying solo, and using my own (foolproof) system.

On a regular basis my coach programmes an hour-long ride in a fasted state. Allegedly, a tried and tested method for increasing fat burning. This may work for finely tuned athletes but I’m more of a dromedary (two-humped camel) and it takes more than an hour’s exercise to stir my adipose. However, I’m always willing to give it a go.

Bearing in mind my rather sluggish riding over the week end, I elected to ride one of my regular circuits. When I first managed to ride up this, 2 1/2 years ago, it took me 75 minutes.  I gradually chipped away at the time until, at the beginning of this year, I went under the hour with 59 minutes and 32 seconds.  Thanks to my training programme, I have over the last 6 months reduced this further by, give or take, 4 minutes.

Mind you, I nearly didn’t make it at all. First off one of my elderly neighbours shot out from in front of the bus, right into my path, as I was descending the Domaine. Luckily for her I had slowed on account of said bus, which was picking up rather than  dropping off passengers. Generally, I find the elderly to be a little hard of hearing so, given that racing bikes don’t have bells, I shouted “Attention”  (Watch out!). She looked taken aback and I imagined that my ears would be burning at that afternoon’s bridge session when she recounted how she had nearly been mown down by the speeding, mad, English woman.

Next hurdle was at the first set of traffic lights where I took the left hand filter to turn left however, the Parisian registered Audi TT, on my inside, in the same lane, decided to go straight on. While I was signalling my intentions, he was not. Another close shave and I’d only gone 2km!

I headed on up the hill past La Colle sur Loup and towards St Paul de Vence where I encountered hazard number three. I had slowed  just past the roundabout to enable a coach party of tourists to cross the road. As they headed towards St Paul an oncoming group unaccountably stepped off the curb and into my bit of the road. Figuring that English might be a wiser option, I opted for ” Watch where you’re going” and they hopped smartly back onto the pavement.

Maybe it was the three brushes with mortal injury, or more probably plenty of bumps and bruises, that got my adrenaline racing. Despite the setbacks, I realized I could be on for a new, best time ever. And so it was. I reached the end of my circuit in a time of 51 minutes and 4 seconds. I should have more off days!

The weather over the festive period has been very mixed albeit largely cold and damp. This has not prevented us from cycling most days though we have tended to limit our exposure to a couple of hours max, generally circumnavigating Cap d’Antibes from both directions.

The additional hours at home have enabled us to make inroads into the “To Do” list. For example: the Vuelta ironing mountain is now a molehill, all of my paintings have been hung or re-hung, the cakes have been adorned with marzipan and icing and the bookcases have been re-organised. In addition, we have finalised our vacations for 2010, determined which races we’re going watch live and, more importantly, booked the hotels.

As befits someone who’s not overly fond of Xmas, I’m not a big fan of New Year. My beloved and I generally prefer to celebrate together, over dinner, at a restaurant, not too far from home, which is renowned for its fine cuisine. Of course, there’s plenty of candidates around here. Yesterday evening we ate at one of our favourite local restaurants which affords us a splendid view 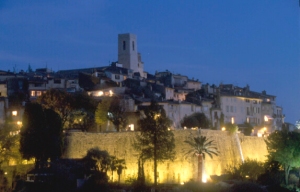 of both the coast and St Paul de Vence. We had a delicious, well-balanced meal washed down with my favourite beverage and then watched the numerous firework displays before heading home.

This morning we discovered that rough seas had overnight deposited most of the beach onto the coastal roads so our daily cycle was cancelled. However, the clean up operation has already begun, it’s remained dry all day and the outlook for tomorrow is sunny.

After a few hours of respite yesterday, the downpour started again and has continued unabated today. I popped out early this morning to collect the edible goodies I had ordered for Xmas. Pre-ordering enables one to avoid the unavoidably long queues.

There was a record queue at the bread shop snaking all around the premises. But it’s well organised with different staff taking one’s order to those taking one’s money, so I wasn’t in there too long. I was much amused to see that the nearby greengrocer/general store had hired security. One expects this in Gucci but not at the greengrocer’s. However, this place probably takes more in a year than all the Gucci stores on the Cote d’Azur. In fact both the bread shop and the greengrocer’s are veritable gold mines. Apart from the fact that they sell excellent produce, they’re in a great location and, to top it all, have free car parking. The car of choice is typically a Porsche Cayenne with Monaco number plates. Yes, while the tax dodgers rent broom cupboards in Monaco,  they live in palatial pads in and around St Paul de Vence.

I returned to discover that my beloved had received a visit from Cagnes sur Mer’s finest and had purchased the obligatory calendar. Here one doesn’t tip either the postman or the fireman, instead one buys their calendars for a sum of one’s choosing. If I had known that Cagnes sur Mer’s firemen were going to get their kit off in this year’s calendar, I would have made a bulk purchase. It would have saved me buying a number of copies of Dieux du Stade for my girlfriends.

I particularly like the look of Mr March. Though I don’t recall any of these hunks coming round to rescue me from our fire in 2005. Mind you, it’s hard to tell in all that gear they wear. However, since our very own M le President is head honcho down at the fire station (incidentally, he doesn’t feature in the calendar, although he could), I may have to pay him a visit at work on a pressing club matter. Seeing my interest in the calendar, my husband has wisely confiscated all matches and the candle ban remains in force. He doesn’t want any more conflagrations.